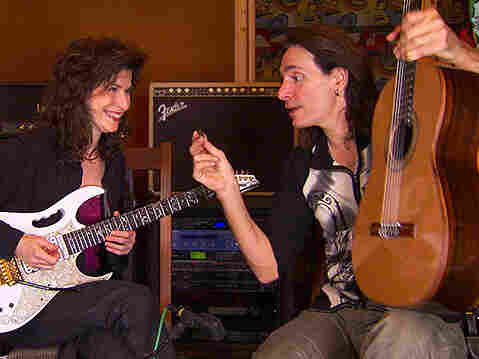 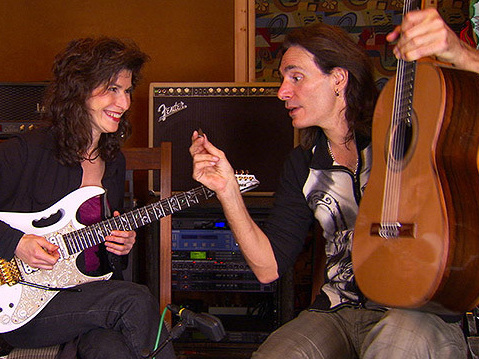 One of her collaborators on the album is veteran rock guitarist Steve Vai, who may not have studied with Segovia but was discovered by Frank Zappa and went on to play with David Lee Roth after he left Van Halen. When two first sat down to play, they gave each other a lesson on their respective instruments, which turned Isbin on to the wah-wah pedal.

"It's hilarious, because my guitar has what's known as a tremolo bar or a whammy bar," Vai says in an interview with All Things Considered host Robert Siegel. "And the whammy bar is probably the most alien thing on my guitar that could possibly relate to a classical guitar. And to just see her grab the whammy bar and the wah-wah, and just start going for it, it was funny. And then me, my form on the classical guitar is just like, you know, awful."

'An Opera Singer On Electric Guitar'

Isbin says she's always been attracted to Vai's "lyricism — he's like an opera singer on an electric guitar." For Vai's part, he says he loves constructing melodies over classical music, which he calls "a little vacation."

Vai has worked with a symphony orchestra in the past and says that he approaches his instrument differently after these collaborations.

"Well, there's something that you get whenever you're sharing music with somebody, especially on the intimate level of a duet like this," Vai says. "And I take a lot away from it, because the classical guitar has a dynamic to it unlike a regular acoustic guitar or an electric guitar. You know, there's times when you should play and there's times when you gotta hold back. It's an extremely dynamic instrument."

Isbin says she feels the same way. Since the 1980s, she's collaborated with rock musicians. The improvisational aspect makes her "freer," but also taught her "to be more aware in listening, because you never knew what was coming around the corner."

A previous Web version of this story incorrectly said that Steve Vai had played with Van Halen.