Accessibility links
With So Many Voices, Will Occupy Still Be Heard? In just a few months, the movement started a national conversation about inequality. With the end of many encampments, the movement is entering a new phase. Some say this dynamism will ensure success. Others think the movement will fail without political partners and compromise. 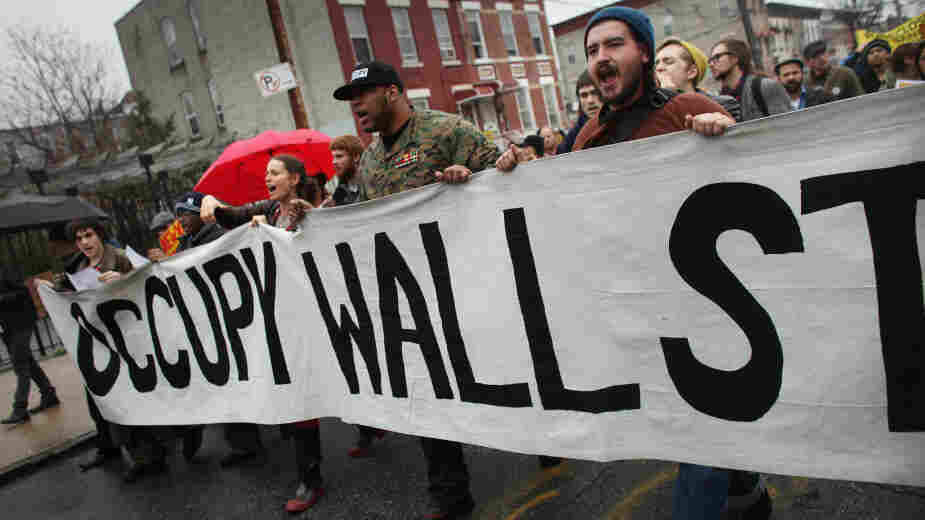 Occupy Wall Street protesters march through in an impoverished community in Brooklyn to protest home foreclosures. Many see the movement's dynamic strategies and aims as key to its success. Spencer Platt/Getty Images hide caption 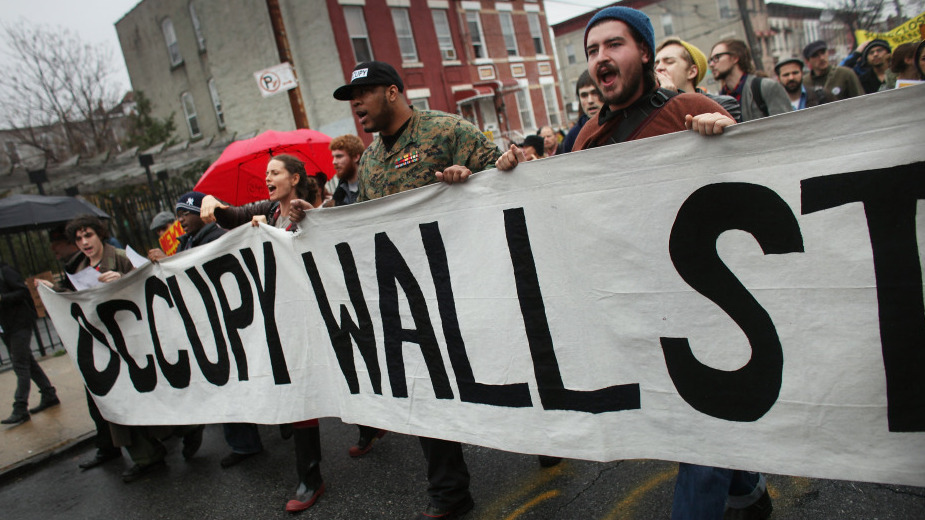 Occupy Wall Street protesters march through in an impoverished community in Brooklyn to protest home foreclosures. Many see the movement's dynamic strategies and aims as key to its success.

When Occupy Wall Street protesters moved into New York's Zuccotti Park on Sept. 17, the mainstream media pretty much ignored it. Seven days later, 80 people were arrested in a march, and videos of a police officer macing a young woman went viral. When 700 protesters were arrested on the Brooklyn Bridge on Oct. 1, the media was there in force.

Soon protests and events were taking place in hundreds of cities and towns, and a national conversation had begun about employment, inequality and financial regulation.

There's pretty much agreement that the Occupy movement has been creative in using symbols. The word "occupy" is so fluid it can be used in hundreds of contexts, and the phrase, "We are the 99 percent" is so inclusive it includes anyone earning less than half a million dollars a year.

Frances Fox Piven, a professor of sociology and political science at the CUNY Graduate Center in New York, says naming the target as Wall Street was also smart. Most people don't understand the economic crisis, she says, but they do instinctively feel financial manipulation is a part of it.

"[The Occupy movement] used symbols in a way that was brash and clear and much more innovative than any of the other efforts to raise issues of inequality or unemployment. People have been doing that for the last 30 or 40 years," Piven says, and nothing worked.

With the end of many encampments, the movement is entering a new phase.

At Zuccotti Park, you may find 20 people on a winter day, but walk into an atrium at 60 Wall St., one of many indoor spaces protesters use throughout the city, and there are about 70 people in planning meetings.

The real challenge for the movement has nothing to do with camping or space: It's how to deal with the very inclusiveness that has made the movement popular.

Starhawk, an author and longtime activist, has visited 10 "Occupies."

"I have jokingly called it a movement of raving drunks and former student body presidents," she says. "You have really, really smart people working very much from the head, and then you have people who are wanting to do nothing but drum day and night," she says. "It is not always easy to figure out how people with totally different perceptual styles [or] understandings of life can work together and make decisions."

Take the issue of the homeless people and people with mental problems who joined many encampments. Do you throw them out? Or are they an important part of the 99 percent with lessons to teach?

Or take the new technology that has aided Occupy. Organizer Lisa Fithian says some see it as a tool of privilege.

"We were accused last night of doing a secret training yesterday, because people didn't know about it," she says. "Well, we put it out through every way we could, but it was all electronic."

Looking at the movement from the right, Josh Barro, a senior fellow at the Manhattan Institute, says he often chuckles when he sees the internal process discussions, the sensitivity to race and class.

They assume, he says, that if you talk long enough everyone will come to agreement, but people within a movement have different views and values.

"You have to recognize that sometimes you're going to have honest disagreements," Barro says, "and you have to be able to move forward in an environment where you realize that not everybody is going to agree on everything."

But Fithian argues there's a new generation coming up that is learning there are other ways of seeing the world.

The Future Of Occupy

The question becomes: Is this a movement for specific changes or a movement to change society altogether? Both ideas exist in the Occupy movement. 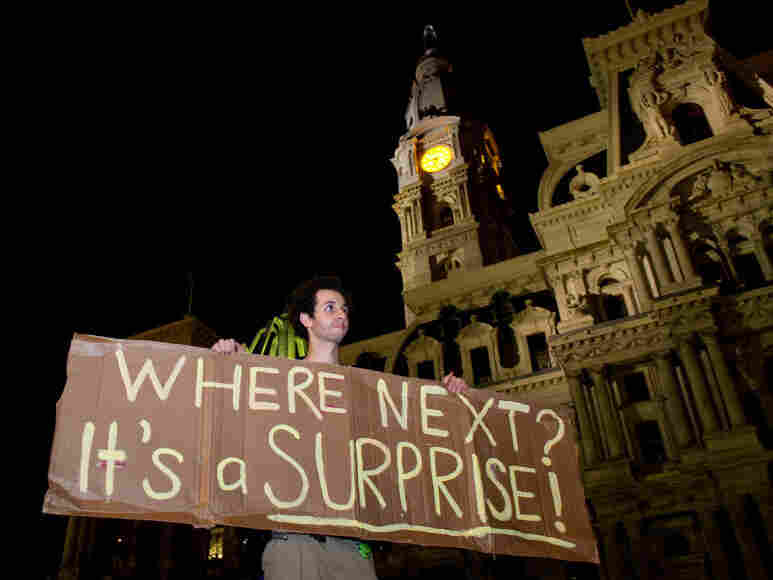 A protester holds a sign after a deadline to clear Occupy Philadelphia's Dilworth Plaza in late November. Occupy protesters across the country have found creative ways to continue their efforts after being evicted from public spaces. Jeff Fusco/Getty Images hide caption 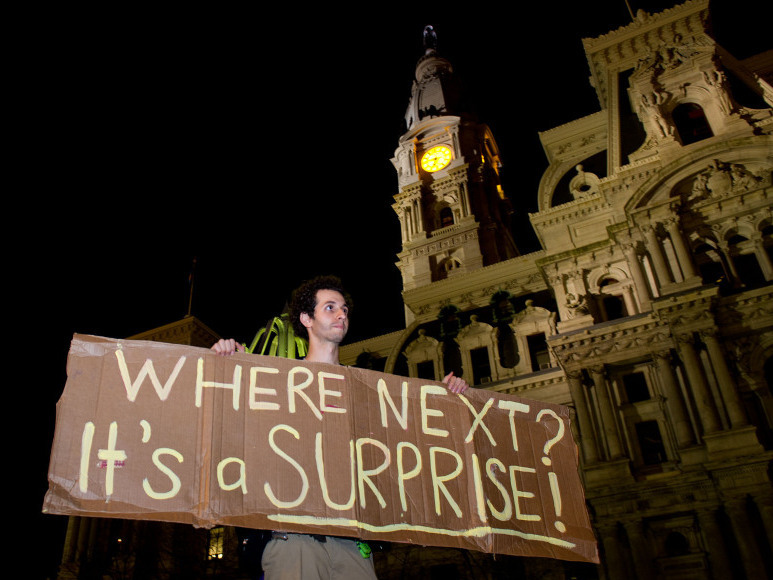 A protester holds a sign after a deadline to clear Occupy Philadelphia's Dilworth Plaza in late November. Occupy protesters across the country have found creative ways to continue their efforts after being evicted from public spaces.

Barro believes the best thing for the movement to do is to pressure Democrats the way the Tea Party has pressured Republicans, but that would mean getting involved in electoral politics and many Occupiers don't want that. Barro also says the use of the 99 percent may resonate, but it's a problem.

If you want a solution to the fiscal crisis "that preserves a lot of government programs that people on the left care about, you're going to need higher taxes in the long term, not just on people making over $593,000 a year, but well down the income scale, certainly to a significant extent on people making more than, say, $100,000 a year," Barro says.

Todd Gitlin, who teaches journalism at Columbia University, has analyzed many social movements. He's on the "let's get a political focus here" side of the debate, although from the left.

There's one thing the Occupy movement has going for it, Gitlin says. "The civil rights movement was very unpopular with Americans for much of its duration," he says. "The anti-war movement represented little more than 10 percent of public opinion when it began."

Still in its infancy, the movement has majority support in many polls. And there are often periods of quiescence in social movements. Early in the civil rights movement, people would often say it was over before it had really begun.

So don't believe any pundit who tells you he knows the future of the Occupy movement.

The only thing clear is it's already more creative and popular than many social movements in the past. On the day protesters were evicted from Zuccotti Park, Brenden Burke, the head of security at Occupy Wall Street said, "We're like water. We will take whatever form we need to take to get where we need to go."