Accessibility links
'Slow, Plodding' Economy Stalled By Housing Market Home prices have fallen 35 percent from their peak about six years ago and continue to drop. That makes lenders and potential homebuyers nervous, so sales aren't picking up much despite the lowest interest rates in decades. And the unsolved foreclosure mess continues to push prices down even more. 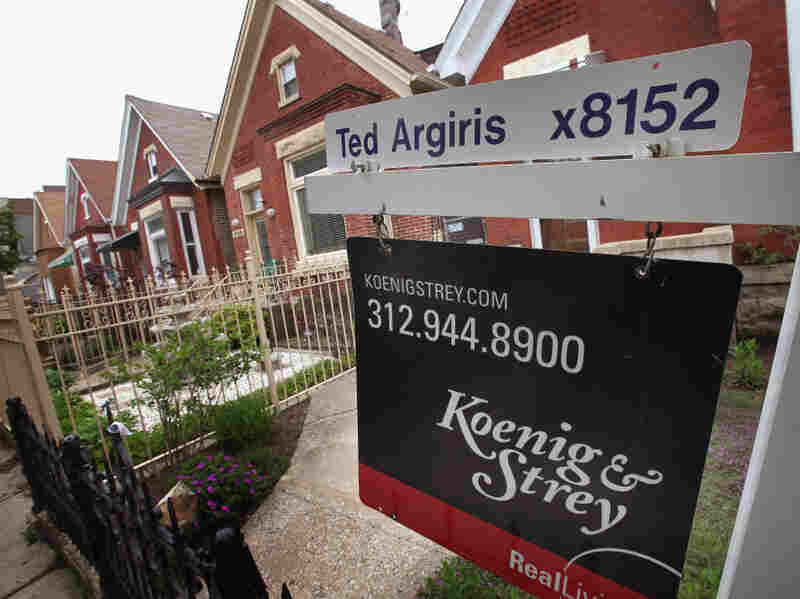 According to the Standard & Poor's Case-Shiller Home Price Index released Tuesday, home prices were down 3.4 percent this year as of October — around a 35 percent drop from their peak. Scott Olson/Getty Images hide caption 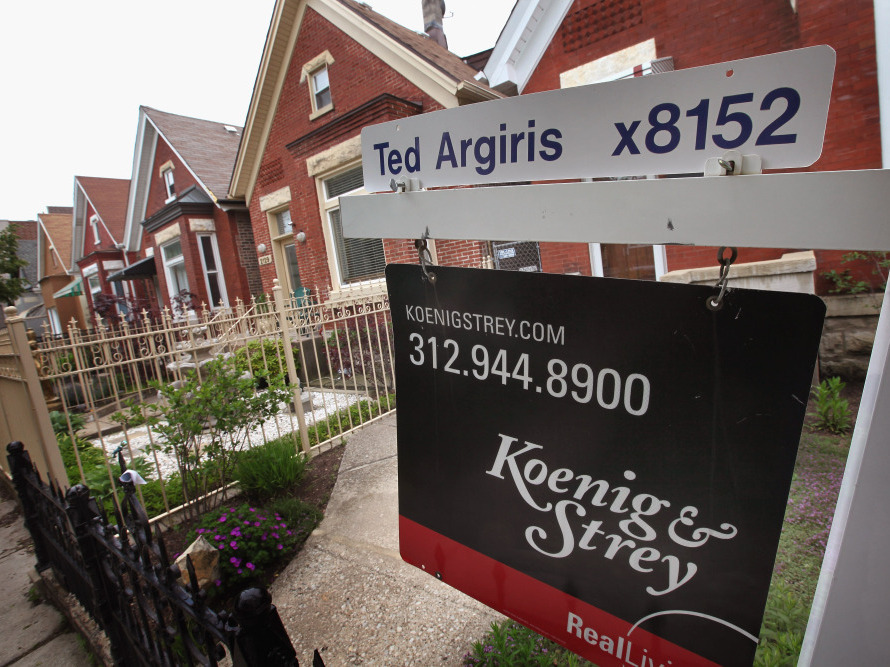 According to the Standard & Poor's Case-Shiller Home Price Index released Tuesday, home prices were down 3.4 percent this year as of October — around a 35 percent drop from their peak.

This month, consumer confidence jumped to its highest level since April, a sign that the U.S. economy is starting to mend. But the housing market isn't going along yet with this cheerier mood: Home prices were down 3.4 percent for the year as of October, according to a new report released Tuesday.

Housing has been at the center of the country's economic troubles since 2007, and heading into 2012, it still has a lot of problems.

In the movie Groundhog Day, Bill Murray keeps waking up to live the same day over and over again. President Obama might feel the same way about the troubled U.S. housing market. In a 2009 speech in Arizona, he spoke about his plan to prevent foreclosures.

Despite all kinds of federal initiatives, the housing market still hasn't seen a real turnaround, which the president addressed this past summer. "[The housing market] is the biggest headwind on the economy right now," he said.

Susan Wachter, a professor of real estate and finance at the University of Pennsylvania's Wharton School, says the housing market still weighs on growth prospects for 2012. "It is part of the reason why the recovery is so slow and plodding," she says.

A house is the biggest single investment and purchase most Americans make. Millions of homeowners are underwater — they owe more than their homes are worth — which puts a damper on people's spending and confidence. There are also hundreds of thousands of fewer construction and related jobs. Wachter says all of that gets felt in the nation's gross domestic product, or GDP.

"It means the growth is maybe 1 percent slower than it otherwise would be. So instead of perhaps 3.5 percent we see 2.5 percent," she says. "That's a big deal difference."

More On The Housing Market

Still, there is at least one sort of bright spot to talk about — that is, for anyone looking to buy a home.

"House prices have fallen about 35 percent from the peak, the peak being just about six years ago," says Mark Zandi, chief economist at Moody's Analytics. "Because of that decline, single-family housing is really quite affordable by historical standards in most markets."

Also, interest rates are lower than they've been in decades. So Zandi says if you've been thinking about buying a house, now might be the time.

While the table is being set for a recovery, the party hasn't really gotten started yet. Home sales were up 4 percent last month, but Zandi says, they've pretty much been bouncing along the bottom without really gaining much traction.

... But A Tough Time Getting Loans

A big reason is that home prices are still drifting a bit lower, and that makes people nervous about getting into the market. It also keeps lenders nervous about loaning people money to buy houses.

"I do think lenders are very cautious," Zandi says. "In many parts of the country it's still quite difficult to get a loan."

So until prices stop falling, buyers and bankers will be nervous. And one thing that keeps pushing down prices is the ongoing foreclosure mess, which hasn't gotten much better. Millions of people have already lost their homes and millions more are delinquent on their mortgages.

"There are so many foreclosures and pending foreclosures out there. This is a huge problem," says Bruce Marks, head of the Neighborhood Assistance Corporation of America, a nonprofit group that helps people avoid foreclosure.

Heading into the New Year, he says, his group has found hundreds of thousands of people who should qualify for federal programs to help them keep their homes.

"These are families that are determined to keep their home that we have to find a solution for," he says.

Marks says there are still all kinds of problems. But groups like his, members of Congress and prominent economists have been pushing through changes and improvements to existing programs. And some hope to see more people being able to refinance or hang onto their homes in the New Year.