Accessibility links
Kitchen Window: Baking With Sweet Alternatives Substituting for white sugar brings a spirit of adventure to baking for food writer Nicole Spiridakis. Her experimenting started with honey and branched out to agave, molasses, maple syrup and more. 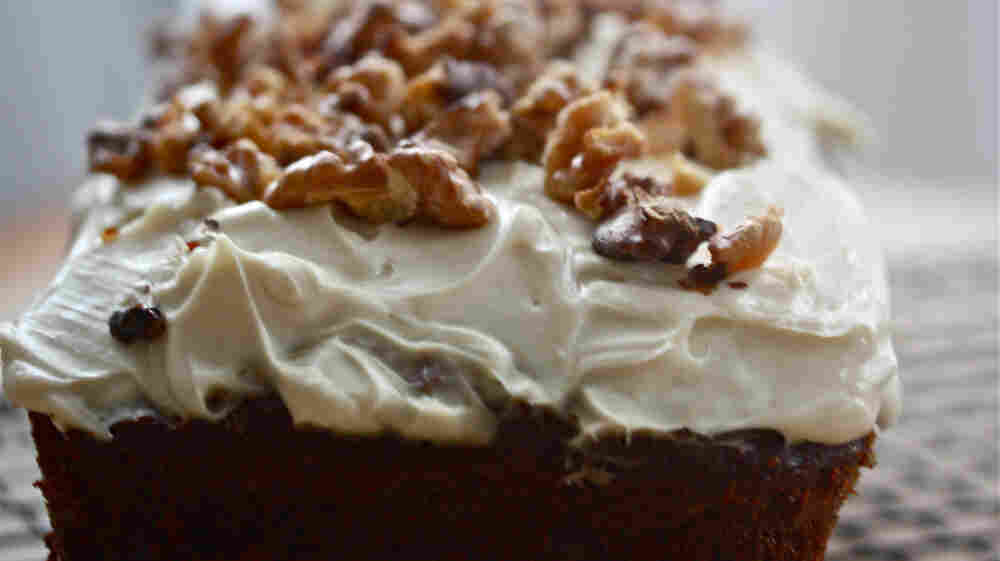 My foray into baking with alternatives to sugar began with a jar of honey my soon-to-be-sister-in-law Emily gave me when I visited the Maine farm where she and my brother lived. She told me it came from a local apiary, and if I couldn't take home some of the candy-like and perfect beets grown in the adjacent field, at least I could take honey. I wrapped the jar in a sweater, shoved it into my bag and rushed off to the airport, already missing the cold Atlantic and their good company.

Back in California, I drizzled that honey over waffles redolent of butter and orange zest, spooned it atop toast with and without peanut butter, and over dishes of ice cream, stirred generous quantities into cups of coffee. It tasted like Maine, sunny and bright, and made me remember the incredible blue fall sky.

Tasting an undertone of maple syrup in a peanut butter cookie spiced with dried ginger transitions the palate from summer into fall.

I like sweets, but if given a choice between sweet and salty, I'll most often pick salty. I'm more likely to crave salted (and peppered) potato chips, soy sauce-laden avocado sushi rolls or a piece of sharp cheddar cheese than a slice of fudgy chocolate cake.

Yet, I'm a baker. Wedding cakes, cupcakes, plain everyday cakes, oatmeal-cranberry cookies — I happily make them all. If more than a week goes by without my undertaking some sort of baking endeavor, I start to get twitchy. While I do eat a bit of what I make (to make sure it's up to par, of course), I usually hand off the fruits of my oven to friends, neighbors and colleagues who take them with no complaints.

So in the spirit of experimentation — and thinking outside the sugar box — I decided to incorporate some of that delicious Maine honey into my next cake. I started slow, and only swapped it in for about a quarter cup of the sugar called for in a recipe for vanilla cupcakes that I was making for a friend's birthday party.

A quarter cup was far too little. Could I perhaps even replace the white sugar entirely with honey? Should I just bite the bullet and make a full-on honey cake? And what about baking with maple syrup instead of sugar? Or that agave nectar stuff? Molasses?

I quickly emptied Emily's jar into a cinnamon-scented loaf that I scattered with sliced almonds and chopped pears before sliding into the oven, completely sugar-free. I even ate two slices myself before bringing the rest into the office. I was hooked on the idea of baking with alternative sweeteners, and I've hardly looked back.

White sugar is much maligned, probably with good reason, but I don't mean for this to be a treatise on the ills of sugar and sweeteners in general. However, the use of fruit or fruit juice or other nonwhite sugars to sweeten food is certainly worth considering as part of a healthful way of eating.

For me, alternative sweeteners bring a spirit of adventure to my baking — whether through replacing a tablespoon of brown sugar with molasses (which has an added bonus of being an iron source) or by eliminating the amount of sugar called for in a recipe altogether and relying on fresh or dried fruit, nuts or even different varieties of flours (and a hint of bittersweet chocolate) to keep things interesting.

I like exploring the tastes and flavors other sweetening agents impart, too — discovering a hint of brown rice (via brown rice syrup) in a chocolate cake intrigues. Tasting an undertone of maple syrup in a peanut butter cookie spiced with dried ginger transitions the palate from summer into fall.

Or I might rely on fruit's natural sweetness to sweeten baked goods. For example, banana-cocoa muffins laced with a hint of cardamom and pecans can be lightly sweetened simply with applesauce. You won't even notice the lack of "regular" sugar, and I always feel virtuous when I eat one of those muffins.

I've also found that I will use less sweetener when I'm not using white sugar. Honey, for example, is quite sweet, so if I'm substituting it in a recipe, I'll reduce the amount. This works to soothe my salt-inclined taste buds and, I hope, better moderates my blood sugar.

The honey Emily gave me is long gone, but my interest in cooking with honey remains. I keep large jars in my cupboard, along with molasses and agave. I tuck jugs of maple syrup in the fridge and keep bags of dried cranberries and figs handy for spontaneous fits of cookie-making. I may still reach first for the salt shaker, but I might — finally — be finding the sweet spot.

Agave nectar, extracted from the agave cactus plant, is a little sweeter than sugar.

Barley malt syrup, from sprouted barley, roasted and cooked down to a syrup with a maltlike flavor, is great for using in more savory recipes, such as a barbecue sauce, rather than baking.

Brown rice syrup tastes about half as sweet as white sugar, with a mild flavor.

A host of organic cane sugars, including muscovado sugar (made from unrefined, evaporated cane juice), organic, whole cane sugar (unrefined and unbleached); turbinado sugar (made by heating sugar cane juice, then spinning it in a centrifuge or turbine to extract moisture and molasses for large, golden crystals) and demerara sugar (similar to turbinado, with large sugar crystals).

Molasses, a byproduct of refining sugar cane, is slightly sweet and a source of iron and calcium.

Stevia, derived from a perennial shrub with leaves 30 times sweeter than sugar and calorie-free.

Xylitol, a sweetener made from corncobs that is low in calories and tastes similar to cane sugar, is available online and in some health food stores.

When I'm not eating my standard bowl of oats for breakfast, I'm eating a bowl of granola – delicious molasses- and maple syrup-sweetened granola packed with nuts and pumpkin seeds, served atop a generous helping of nonfat Greek yogurt and piled with sliced fruit. One of the best parts about making homemade granola is that it's such a cinch. Feel free to switch up the combinations of nuts and dried fruit. It's hard to go wrong here. 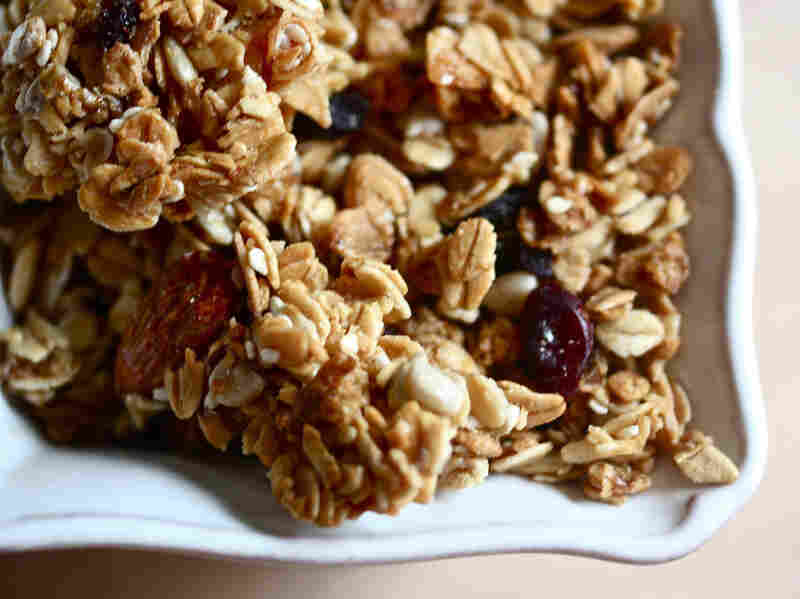 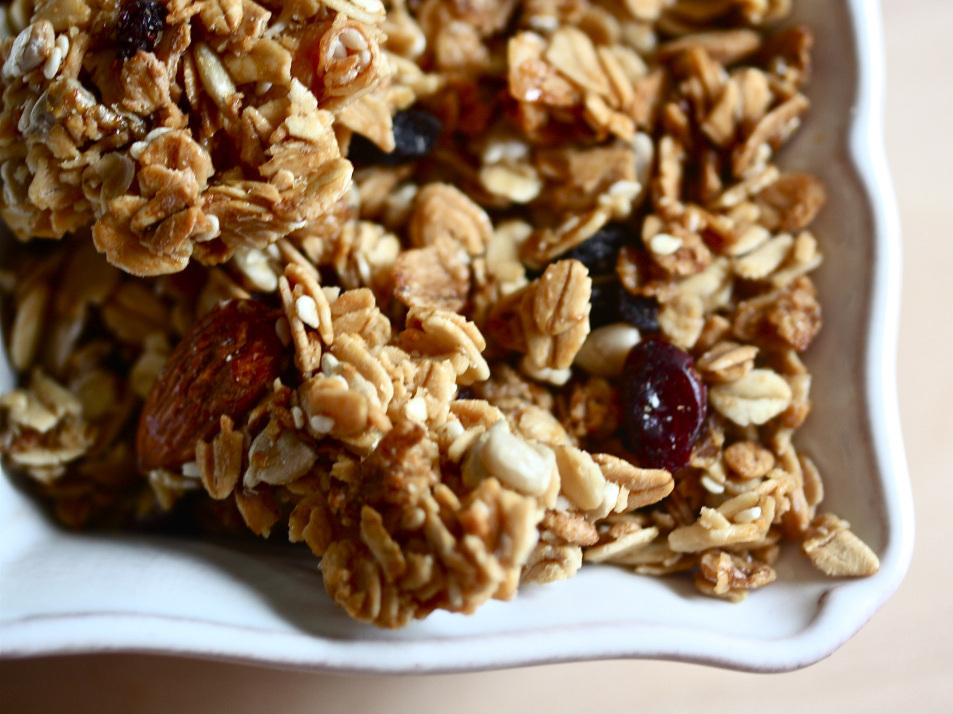 In a large bowl, combine the oats, nuts and coconut.

In a separate bowl, combine maple syrup, molasses, oil and salt. Combine both mixtures and pour onto 2 sheet pans. Cook for about 1 hour and 15 minutes, stirring every 20 minutes.

Remove from oven and transfer into a large bowl. Add dried cranberries and pumpkin seeds and mix until evenly distributed.

This is a cake Pooh couldn't resist: rich with honey, hints of cinnamon and caramelized pears. When I brought it in to work, the resounding response, other than "it's delicious," was "this tastes like fall." And it does. I used pears from my parents' neighbor's tree, but you could also use apples or even plums, if you can find them. This is a lot of cake, so I baked it in a deep springform pan and baked the excess batter in a small loaf pan — without pears — so as not to waste it. 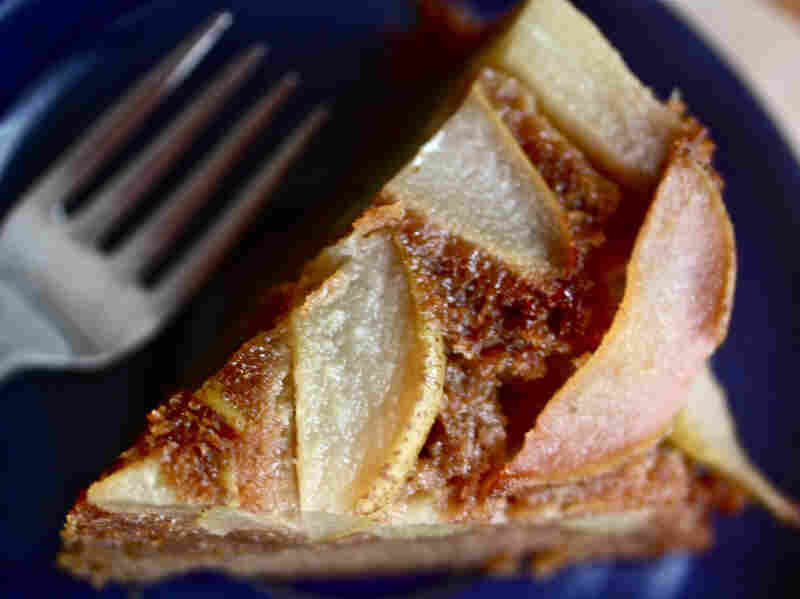 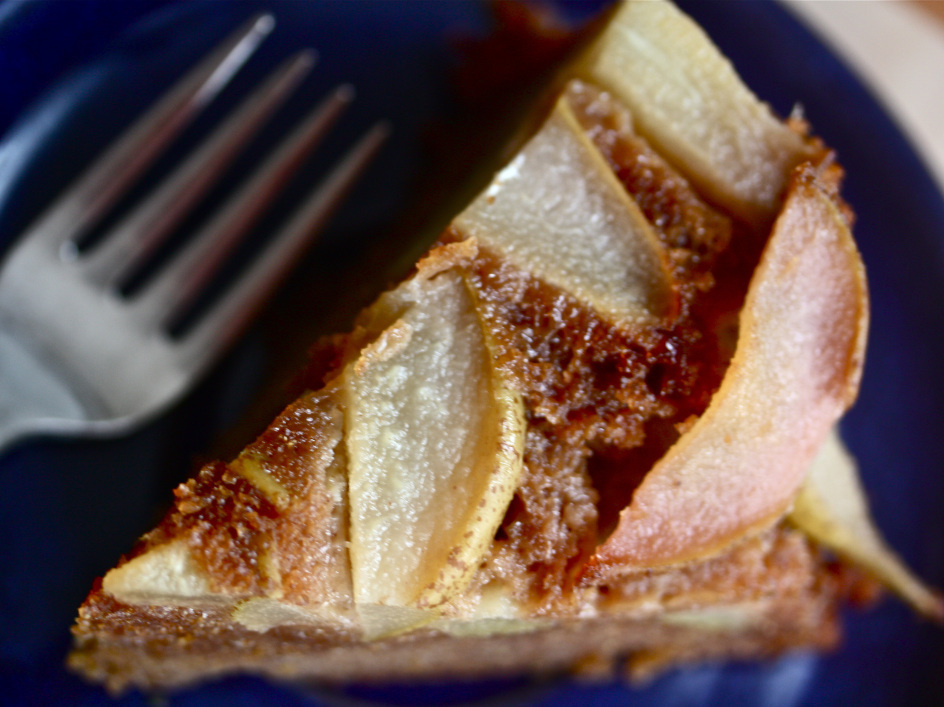 4 medium-sized pears, washed and quartered but unpeeled, then sliced into thin, long slices

Preheat oven to 350 degrees. Grease a 9-by-4-inch round springform cake pan and a small loaf pan.

Put the butter in the cake pan and put in the oven for about 5 minutes until the butter melts.

Remove from oven and swirl butter around pan, then arrange the pear slices in a circular pattern.

In a large bowl, whisk together the flours, baking powder, baking soda, salt, cinnamon, cloves and ginger. Make a well in the center, and add the oil, honey, eggs, vanilla, coffee and orange juice.

With a whisk, beat the ingredients together to blend well, about 2 minutes.

Spoon batter gently on top of the pears in the cake pan, and into the mini loaf pan. Place cake pans on a baking sheet to prevent any spillage.

Bake the cakes for about 60 to 75 minutes, until done all the way through (the small loaf will take about 35 minutes to bake).

Carrots are pretty sweet on their own, so it's fairly easy to reduce the amount of sugar — or eliminate it altogether and use agave nectar instead. While there's a bit of controversy concerning agave — some claim it's just as "bad" as sugar — I like it for its sweet, yet light, flavor that never overwhelms. And the cream cheese frosting infused with maple syrup is reason enough to bake this cake. 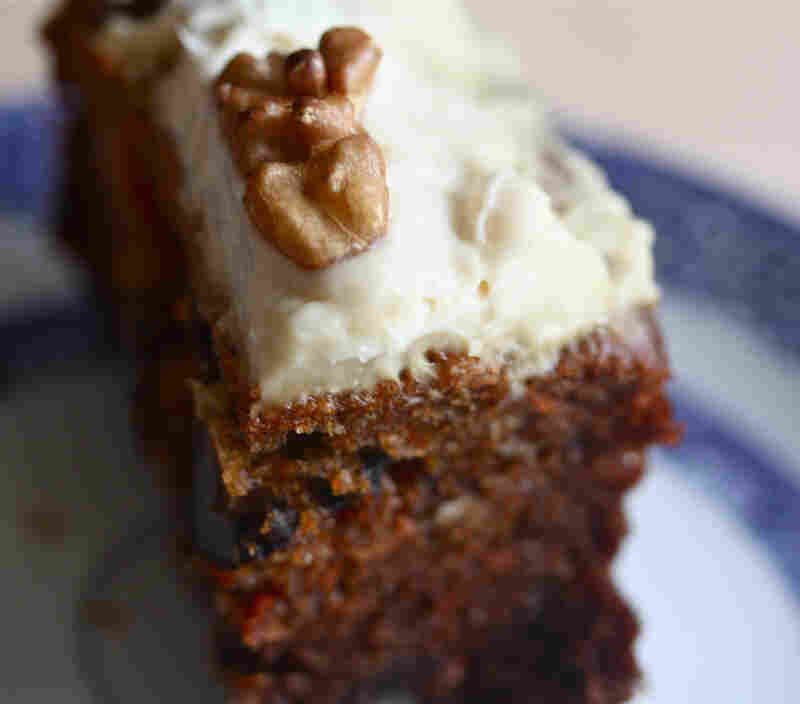 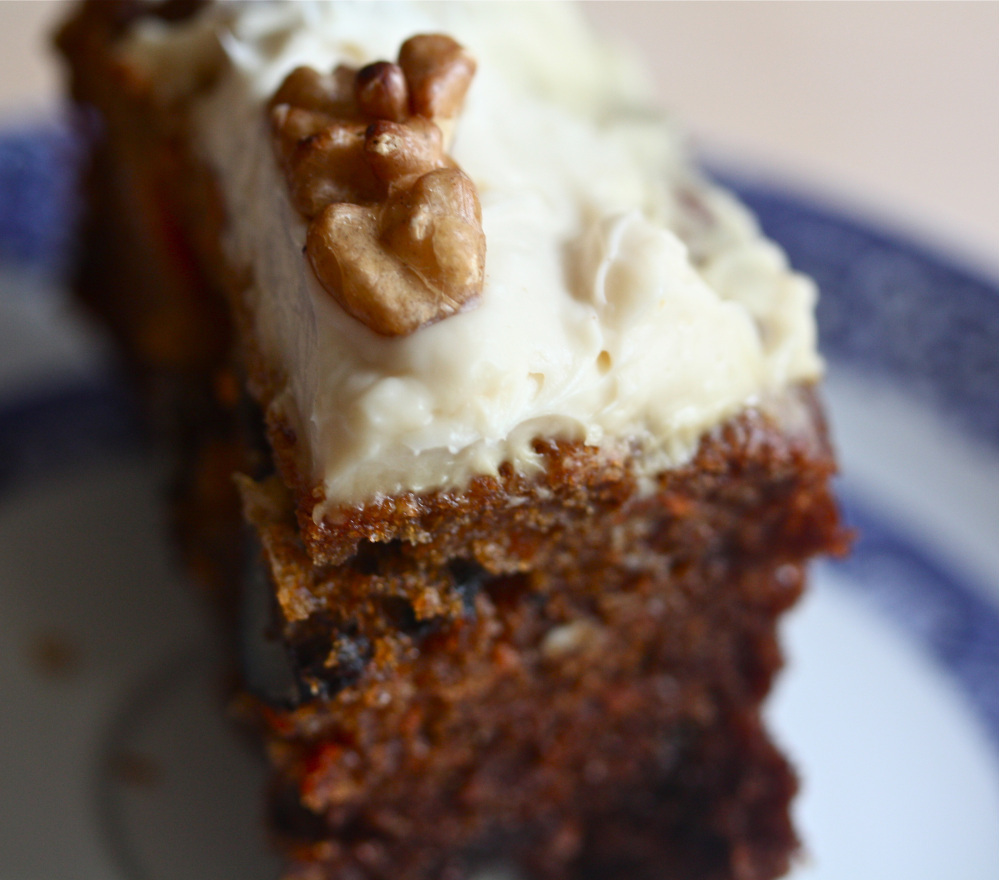 Preheat the oven to 350 degrees. Grease a loaf pan and a mini loaf pan.

Grate the carrots and set aside.

Whisk the agave and oil in large bowl until well blended. Whisk in the eggs one at a time. Add flour mixture and stir, and whisk until blended. Stir in carrots, 1 cup of walnuts and raisins.

Bake for about 45 minutes for the loaf and about 30 minutes for the mini loaf. Remove from oven and let the loaves rest in their pans for 10 minutes. Turn out onto rack and wait until cool to frost.

Whisk the maple syrup into the cream cheese, whisking and stirring to blend. Add a little more maple syrup if the frosting is too thick.

To assemble, spread a light layer of cream cheese onto each loaf, swirling decoratively. Sprinkle with the remaining toasted walnuts. 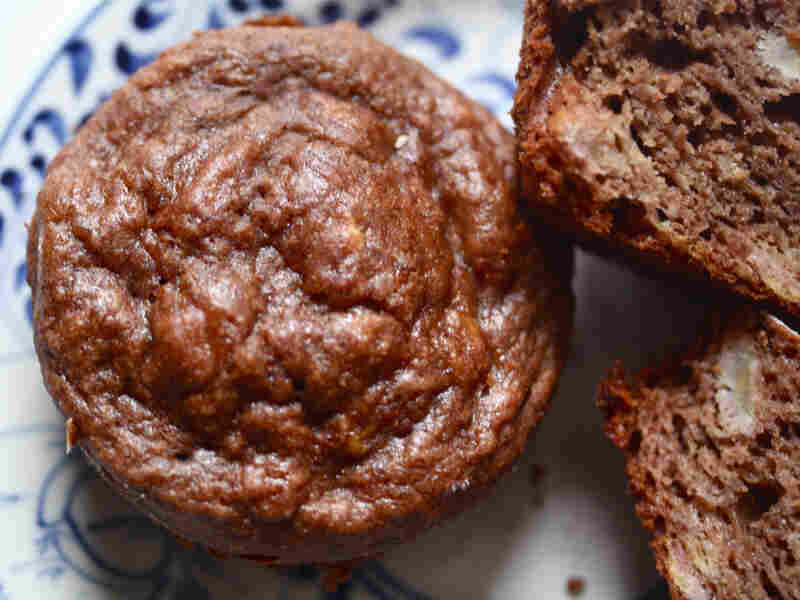 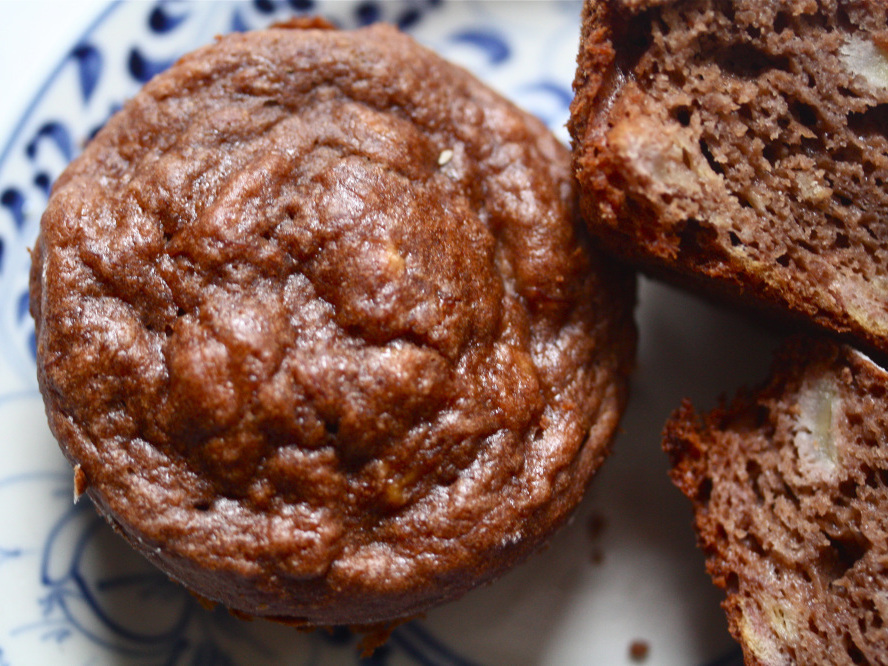 Grease the bottom and sides of a muffin tin (or loaf pan, if you're so inclined). In a medium bowl, combine the flours, baking powder, baking soda, cocoa and spices and set aside.

In another bowl, combine the egg, mashed bananas, applesauce and butter. Add the wet mixture all at once to the dry mixture and stir until just moistened. Fold in the pecans.

Bake in the prepared pan for about 20 minutes for muffins (50 to 55 for a loaf), or until a toothpick inserted in the center comes out clean. Cool in pan for 10 minutes then remove.

Peaches and honey (and blueberries) complement each other beautifully, and the fruit is so sweet you need just a little bit of honey to make this pie taste properly dessert-like. I added a pinch of xylitol in the crust instead of sugar, though you could easily do without. Hang on to this recipe for next summer. 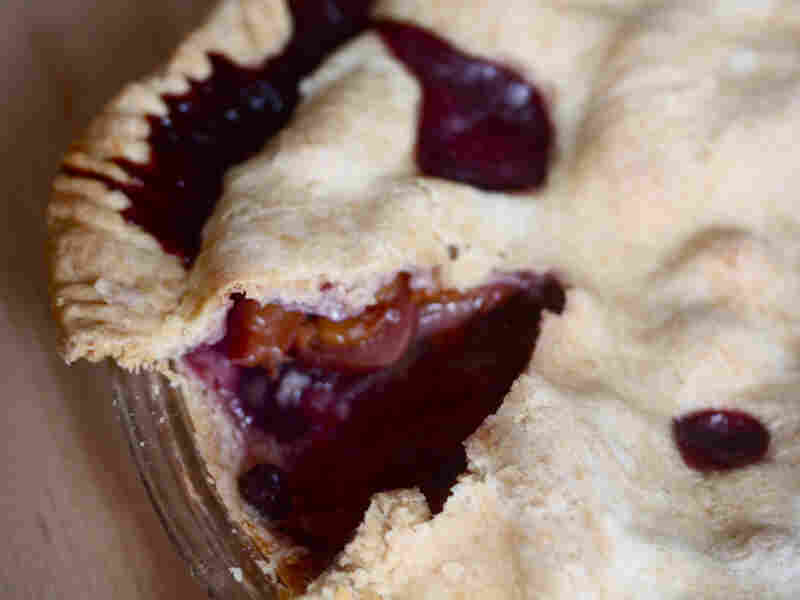 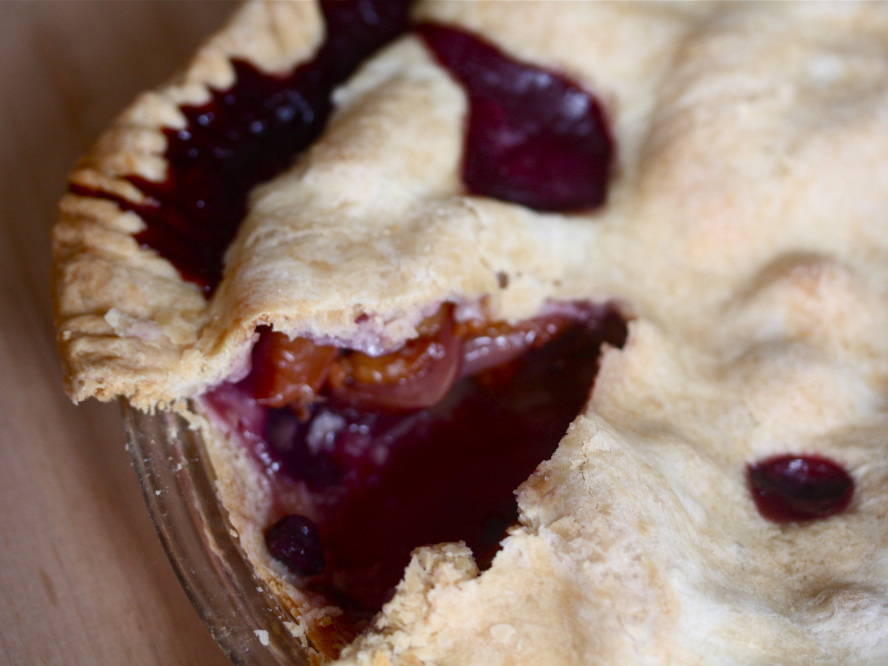 1/2 to 1 teaspoon xylitol or stevia, or to taste (sweetness can vary by product and brand)

Combine flour, salt and sweetener in a bowl. Cut in the butter using a pastry cutter, fork or your hands. Mix and crumble together until the mixture resembles coarse meal. Add the ice water 1 tablespoon at a time, tossing and stirring with a fork until it just holds together. Wrap in plastic wrap and let rest in refrigerator at least a half-hour. Remove and let warm up a bit, about 5 minutes, before you roll it out.

Transfer filling to pie shell. Cover pie with the top dough. Press edges together, crimp and then trim excess. Cut 2 vents in top crust with a sharp knife.

Place the pie on a baking sheet and bake for 20 minutes. Reduce oven temperature to 375 degrees. Continue to bake until crust is golden-brown and filling is bubbling, about 50 minutes more. Cool pie to room temperature before serving.