Accessibility links
60 Years After Leaving, Porpoises Again Play In SF Bay Harbor porpoises are showing up in growing numbers under the Golden Gate Bridge. Six decades ago, they were driven away in part by wartime activities and poor water quality; now, researchers are trying to understand why they're returning. 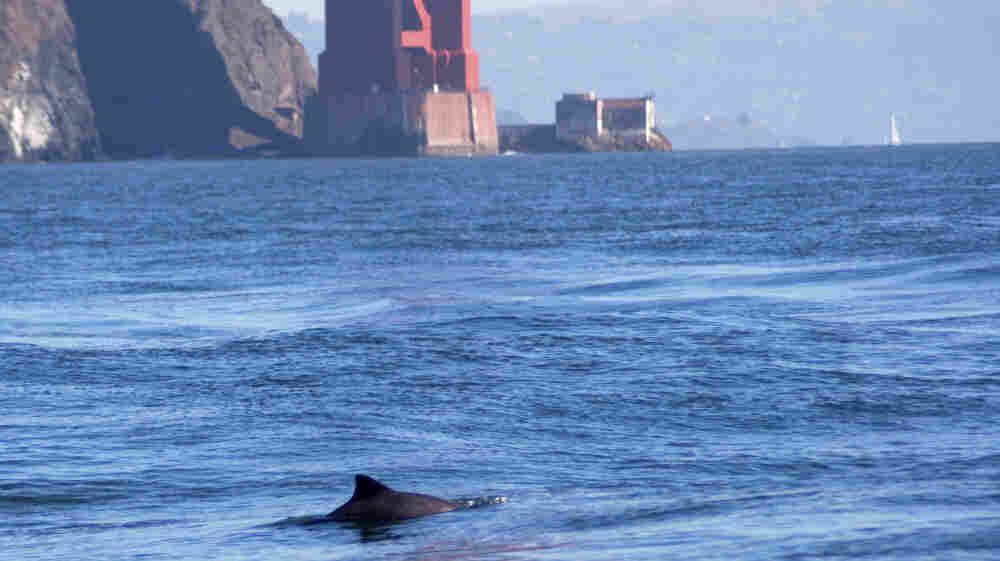 A harbor porpoise comes up for air near the Golden Gate Bridge. The porpoises are returning to the bay in growing numbers after a 60-year absence. Isidore Szczepaniak/Golden Gate Cetacean Research hide caption

Something that has been missing from San Francisco Bay since World War II appears to be making a comeback: Harbor porpoises are showing up in growing numbers, and researchers are trying to understand why they're returning.

The walkway across the Golden Gate Bridge is almost always packed with people taking photos. But Bill Keener isn't here for snapshots of the stunning views. He's aiming his massive telephoto lens at a dark shape in the water 200 feet below.

"There's a porpoise right there, coming very, very close," he says. "Here's a mother and calf coming straight at us." Keener is with Golden Gate Cetacean Research, a nonprofit group focused on studying local porpoises, whales and dolphins.

Harbor porpoises have dark gray backs, and they're about 5 feet long — smaller than most of their dolphin relatives. Keener spots one turned on its side and spinning.

The porpoises, feeding in the middle of a busy shipping lane, spin as they go after schools of herring and anchovies. Seeing this behavior is huge for Keener because harbor porpoises are notoriously shy in the open ocean. But the fact that they're here at all is what's most remarkable.

Keener and his colleagues have identified 250 porpoises with their photos by looking for unique scars on the animals. When the team first started working on the bridge, the patrol officers took notice.

"We're staring down at the water for hours," Keener says. "They start getting worried about us. But they know us now; they know what we're doing." 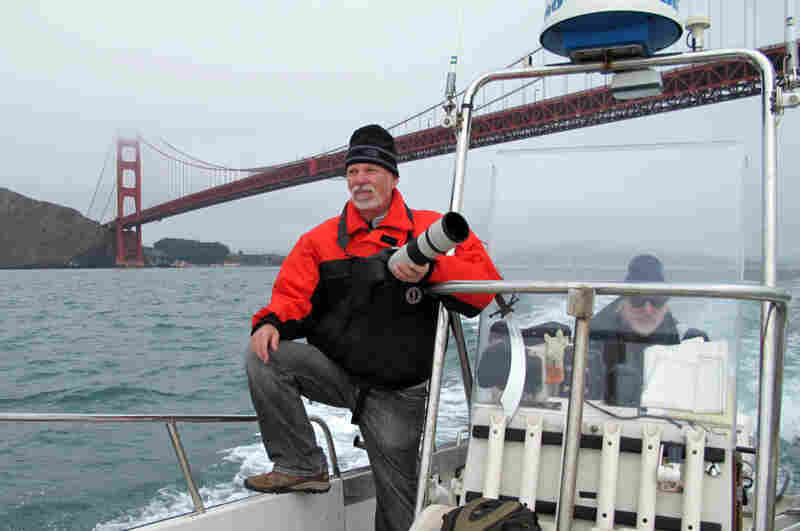 Bill Keener (left) and Jonathan Stern search for porpoises under the Golden Gate Bridge. Water quality has dramatically improved since the 1970s, which may be bringing the porpoises back. Lauren Sommer/KQED hide caption 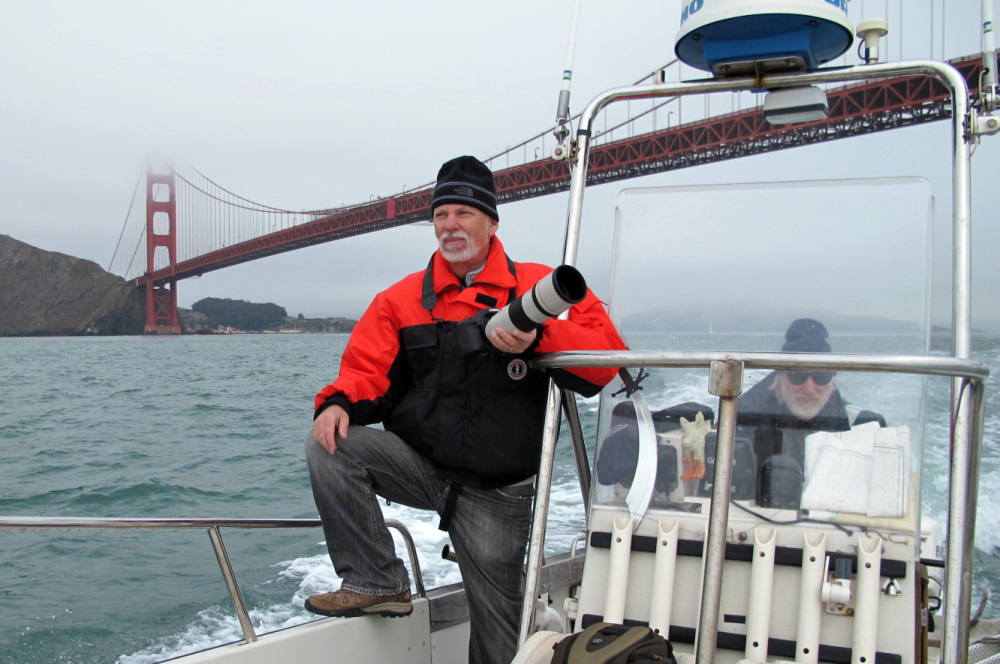 Bill Keener (left) and Jonathan Stern search for porpoises under the Golden Gate Bridge. Water quality has dramatically improved since the 1970s, which may be bringing the porpoises back.

The big question, though, is why harbor porpoises disappeared in the first place. Keener says the bay has always been porpoise habitat. Sightings were common until the 1930s.

"We don't really have reports from around World War II, and there were a lot of things going on during World War II that could have caused [the decline]," he says.

San Francisco Bay became a wartime port. It was a major ship-building center. One newsreel reported that 14 warships at one time sailed under the Golden Gate Bridge. And the Navy strung a seven-mile-long net underwater across the opening of the bay to keep out Japanese submarines. Hundreds of mines were planted in the waters outside the Golden Gate.

Keener says all of this certainly would have disturbed the porpoises. But there's a bigger change that may have driven them away: water quality.

The bay waters today are a far cry from those of the 1950s and '60s. As the region boomed, so did water pollution. Keener says raw sewage used to flow right into the bay.

"I remember coming across the Bay Bridge when I was very young, and it would just smell," Keener says. "It would stink." 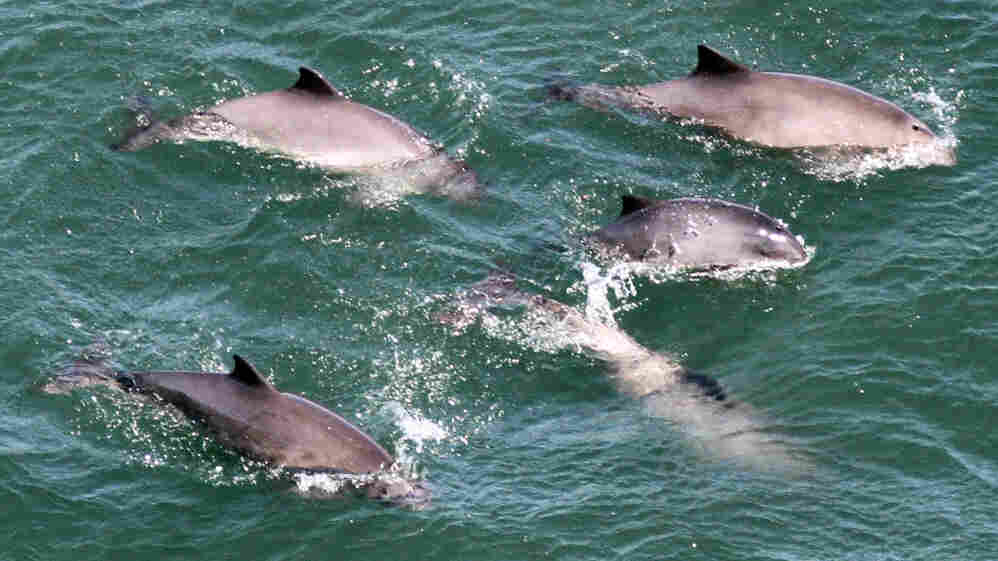 A group of harbor porpoises in San Francisco Bay, photographed from the Golden Gate Bridge. Harbor porpoises haven't been seen in the bay since the 1930s. Researchers believe World War II activity may have contributed to their disappearance. The Navy strung a seven-mile underwater net across the mouth of the bay to keep out enemy submarines. William Keener/Golden Gate Cetacean Research hide caption

After the Clean Water Act was passed in 1972, the bay's water quality began to improve. But it took time for the food web to come back. San Francisco State University whale researcher Jonathan Stern says maybe the porpoises had to rediscover the bay.

"Over 60 years, we're talking about a number of generations of porpoises," Stern says. "So it's quite likely that San Francisco Bay as a habitat was out of the institutional memory."

Stern and Keener glide over the bay waters in a 22-foot boat, slowing down as they pass under the bridge.

"There's porpoises between us and the south tower at 200 yards," Stern says. Keener and Stern have a special permit to approach the porpoises. They wait, listening for them to surface.

"I just heard one here," Keener says. "Here's a cow-calf pair close to the boat, and we'll hear this puff. The old-time sailors used to call them puffing pigs. That's the exhalation."

The porpoises seem calm around boats in the bay, which Stern says will let researchers study their life cycle and social structure.

"It's one of those very few good-news environmental stories. And it's in our backyard. It gives one hope," Stern says.

It also gives researchers a chance to study how porpoises will react to the America's Cup race, which comes to the Bay Area in two years.