Accessibility links
Hell On Fire In 2011, Thanks To Film And Books In 2011, hell was a hot topic, from Hollywood to doomsday prophets, and especially for best-selling books. Evangelical preacher Rob Bell wrote Love Wins, which takes aim at the fundamental evangelical belief that non-Christians go to hell. Bell's book spawned a bevy of new books on hell. 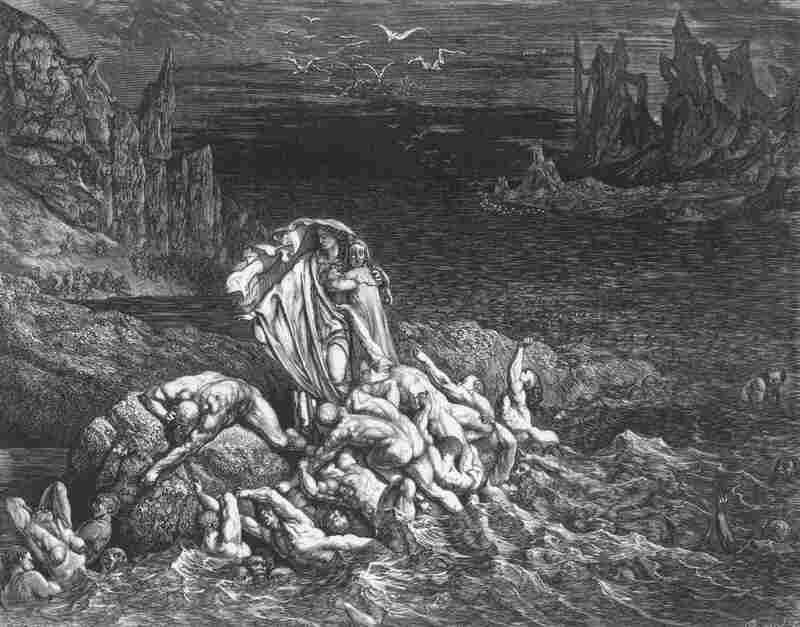 Hell was much written and thought about in 2011. In this 18th century engraving accompanying Dante's Inferno, Virgil leads the poet past souls writhing in torment in the River Styx. Hulton Archive/Getty Images hide caption 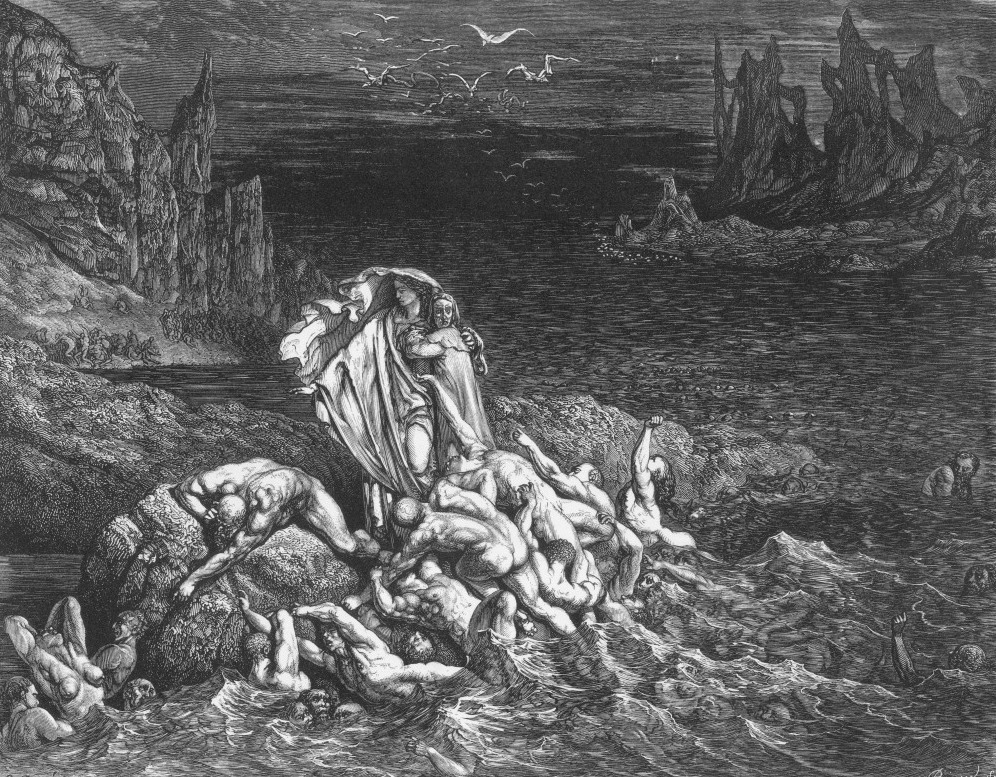 Hell was much written and thought about in 2011. In this 18th century engraving accompanying Dante's Inferno, Virgil leads the poet past souls writhing in torment in the River Styx.

Your Turn: What's It Been A Good Year For?

In 2011, hell was a hot topic, from Hollywood to New York Times best-sellers. In fact, this year has seen an incendiary debate about the existence and contents of hell.

The year began with an epic battle between a priest and Satan, with Anthony Hopkins playing a demon-possessed priest in the movie The Rite. The Hollywood glimpse of the underworld came and went without much notice by moviegoers. But then, another form of hell on Earth grabbed the headlines. Judgment Day would soon be upon us.

"It will be a horror story beyond measure," predicted Harold Camping, the doomsday prophet and founder of Family Radio, in early May.

Camping had read between the lines of the Bible and proclaimed that on May 21, an earthquake would convulse the entire world, time zone by time zone. Christian believers would fly up into the air to meet Jesus. As for those left behind, Camping announced, "There will be weeping and wailing because everybody will realize: This is it. Judgment Day has come."

When May 21 came and went without event, Camping and his followers — some of whom had given up jobs and family to spread the word — had one simple question: "What in the world happened?"

He went on to argue that a spiritual judgment had occurred; we just couldn't see it. Camping suffered a stroke a few weeks later, and his prediction that the Earth would be destroyed in October also failed.

Making It To Heaven

But if hell did not make a physical appearance on Earth, it made a huge splash in the book industry, jump-started by a promotional video from one of the nation's most influential evangelicals.

"Will only a few select people make it to heaven?" asked Rob Bell in the video, "And will billions and billions of people burn forever in hell?"

Bell — whose hip, riveting preaching style drew thousands to his Mars Hill Church in Michigan and brought him worldwide fame — wrote a book that takes aim at a fundamental evangelical belief: hell. He says he began thinking about hell when his church put on an art show about peacemaking, and one of the pieces featured Mahatma Gandhi.

"And somebody had attached to the piece with Gandhi this handwritten note that said, Reality check, he's in hell. And it was, like, really? That's the gospel of Jesus? That's the Good News?"

Bell's book, Love Wins, argues that God's grace and love mean that many and perhaps all people — not just Christians — will spend eternity with God in heaven.

"Buddhists, Hindus, people of Jewish faith ... do I think there will be all sorts of people reconciled to God, present in heaven, however and wherever that is?" Bell asks. "Of course. The thing I think you'll hear most in heaven is, 'Wow. That's awesome.' "

Bell did not argue that hell does not exist. He said people can choose to be in hell by definitively rejecting God's grace. But he says God is tireless in trying to win every person over. And eventually, love wins. This popular message sent Bell's book soaring to the top of the New York Times best-seller list. Then came the blowback, and it was hotter than you know what.

Evangelist Franklin Graham called Bell "a false teacher" and "a heretic." Author and pastor John MacArthur said, "My heart goes out to him, because he is really deceived." And in a scathing interview, MSNBC television host Martin Bashir criticized Bell for making the Gospel "palatable, easier to swallow. That's what you've done, haven't you?" he scolded, barely letting Bell defend himself.

Bell's book spawned a bevy of new books on hell, pro and con. Among the authors was a friend and pastor, Francis Chan. When he got Bell's book, Chan was secretly hopeful.

But when Chan studied the Bible and particularly Jesus' teachings, he concluded there is a place of torment called hell. He wrote his book, Erasing Hell, to counter Bell's kinder, gentler message. What happens if Bell is wrong, Chan worries, and people become complacent about their eternal destiny?

"If you're going to jump out of a plane and someone threw a backpack on you and said, 'Trust me, it's a parachute,' and I've opened it up, and I go, 'No, it's just a backpack! It's not going to work,' " Chan says. "And so in the same way, if there's a belief that, well, God's going to let us all go [to heaven]. No! I've looked, I've looked into the Scriptures and that's not what I see."

For his part, Bell says the Bible can be read many ways, and evangelicals shouldn't be so certain about their theology of hell. He adds that this "turn or burn" mantra distorts Christianity and drives people away from the faith.

"What harms people," Bell says, "is when a pastor gets up at a funeral and says, 'Hi everybody, we're here today because Uncle Bob died, and I want you to know for sure that Uncle Bob is burning in hell forever.' That hurts people."

So why is 2011 the year for hell? It's not as if this is a new concept. What's happened, says Lauren Winner, assistant professor of Christian spirituality at Duke Divinity School, is that Bell's book exposed a debate among evangelicals that that's been percolating underground for years.

"There have been hints of creeping universalism, or a more expansive thinking about salvation in evangelicalism, for at least the last 30 years," she says.

Winner says younger Christians, in particular, are squeamish about the idea that their non-Christians friends and family will burn.

"If you live next door to a Muslim, and you work in a cubicle next to a Wiccan, you may be a very devout conservative Christian, but you may be very uncomfortable imagining that those people are not going to be with you eternally."

In fact, Bell and like-minded believers are sounding awfully Catholic. The Rev. James Martin, culture editor at America Magazine, has written and thought a great deal about the doctrine of hell. He says that according to Catholic thinking, people land in hell not because of which faith — or no faith — they subscribe to, but because they choose to reject God's grace and overtures toward reconciliation.

"One of my favorite comments about hell is from St. Therese of Liseux, who said, 'I believe in hell, and I believe it's empty,' " Martin says.

Martin quickly adds that he can imagine a soul in hell rejecting God's forgiveness out of pride — Hitler, Stalin and Judas come to mind — but that the Roman Catholic Church has never said who it believes is in hell. Martin notes that hell is an essential concept in Christian theology, because hell says that God cares about how we live.

"I am not going to be taking any chances with hell," he says. "I believe in that final judgment, and I believe when I see Jesus, I will be asked for an account of my life."

In the end, Martin says, hell is a mystery. And it turns out it's one of the most contentious mysteries of 2011.