Accessibility links
'Smart Decline': A Lifeline For Zombie Subdivisions? With many boomtime developments now just dusty wastelands, Sun Belt suburbs like those outside Phoenix are shifting gears. Some planners argue for a radical option called "smart decline" — letting empty lots go back to nature and even, in some cases, tearing down infrastructure. 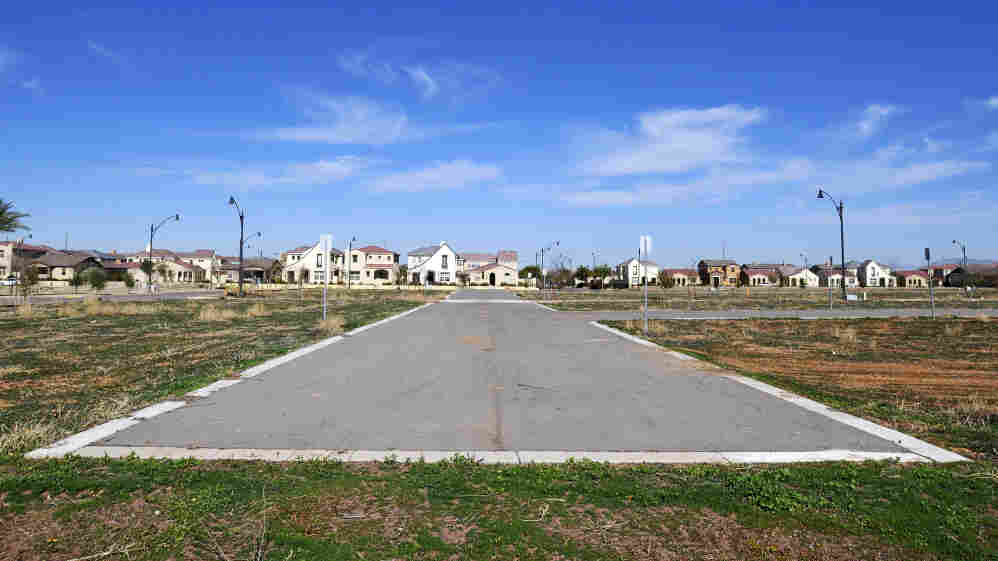 Unfinished subdivisions like this one in the Phoenix suburb of Gilbert, Ariz., have led urban planners to suggest "smart decline" strategies that sometimes even dismantle existing infrastructure. Laura Segall/Bloomberg via Getty Images hide caption 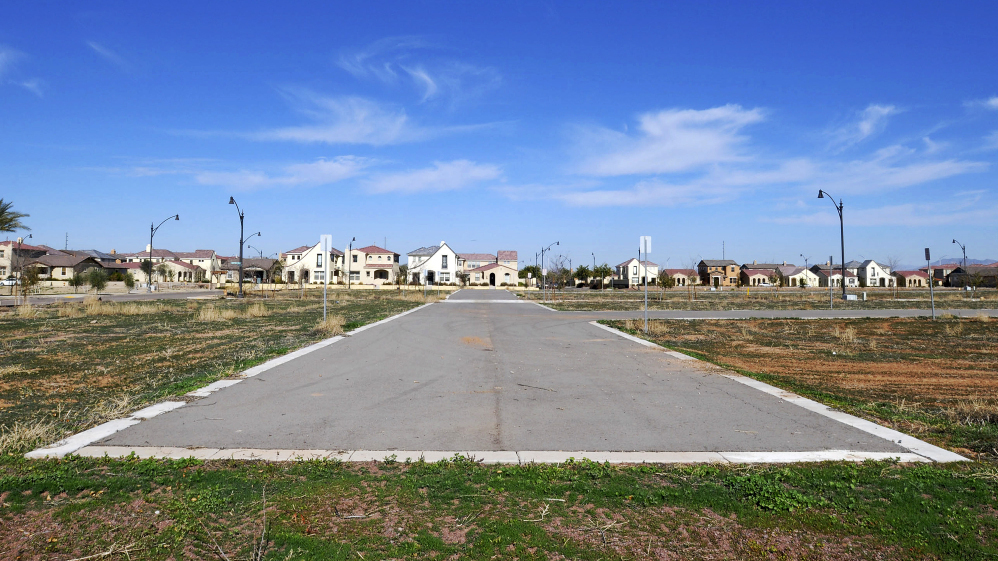 Unfinished subdivisions like this one in the Phoenix suburb of Gilbert, Ariz., have led urban planners to suggest "smart decline" strategies that sometimes even dismantle existing infrastructure.

On the western edge of Phoenix, it's easy to find vast tracts of empty land once prepped for two-by-fours and work crews. Utility stanchions emerge like errant whiskers from the desert floor.

This is the land of zombie subdivisions. Some experts believe up to 1 million dirt lots in central Arizona were in some stage of approval for new homes when the market crashed.

Urban planners are floating a radical solution for areas like this. It's known as "smart decline."

Justin Hollander, an assistant professor at Tufts University, wrote a book called Sunburnt Cities, about smart decline in the Southwest. After the bust, he says, more than a third of ZIP codes in major Sun Belt cities saw population losses.

"People are leaving," Hollander says. "So that means all the houses, all the roads and infrastructure that supports those houses, it doesn't just disappear."

In some cases, Hollander calls for tearing down that infrastructure. He points to some Rust Belt cities that took generations to realize the depth of their problems.

"If you don't do a good job, it further destabilizes the neighborhood," he says. "It further creates a cycle of disinvestment."

Hope For The Zombies

Jim Holway works for the Tucson-based Sonoran Institute, a group that promotes sustainable development in the West. And he has hope for some of the zombie subdivisions.

"I tend to assume that we will grow again," he says. "Is it possible the forces that drove the growth in the West really have come to an end? I think it's unlikely. Certainly this is a time for creative thinking."

He agrees that letting land go back to nature — farming or desert — is one solution for the most unattractive zombie areas. But says the land closest to the urban core still has a chance.

And that raises another option: Start over.

That's the approach the city of Maricopa, south of Phoenix, is taking.

During the boom, Maricopa planners issued 600 housing permits a month. After the bust, a single piece of land with room for 182 houses was rezoned for mixed use. The Roman Catholic Church bought it, and now there are plans for a private school, shops at ground level and loft-style housing above.

"Everyone has taken this opportunity to catch our breath and take a look at how we want to grow in the future," he says. "And we've been at a balance now for the last couple years and able to catch up and to be smarter."

Still, it will take Maricopa years to swallow the 16,000 lots set aside for residential development. Public swimming pools, baseball fields and schools will replace some of those zombie subdivisions.

Meanwhile, on the west side of town, Swann just chuckles at the idea of "smart decline."

"At some point, sometime fairly soon, this land will be profitable again, and it will turn into houses," he says. "And you'll drive by this five years from now, and you won't remember that you were here because it will be completely different. That's the way Phoenix works. Phoenix changes like dreams."