Accessibility links
Israelis Clash Over Strict Religious Codes Thousands protest in the city of Beit Shemesh against the imposition of a strict religious code favored by ultra-Orthodox Jews. It became a national issue after a young girl was spat on for her allegedly "immodest" attire. 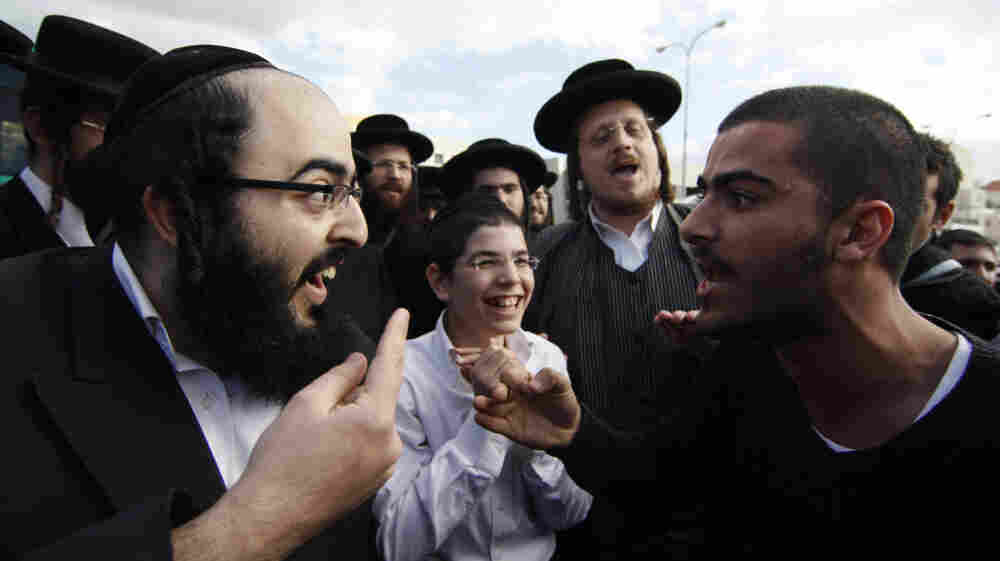 An ultra-Orthodox Jewish man (left) and a secular man argue during a protest against the strict religious codes favored by the ultra-Orthodox in the Israeli city of Beit Shemesh. Stringer/Reuters/Landov hide caption 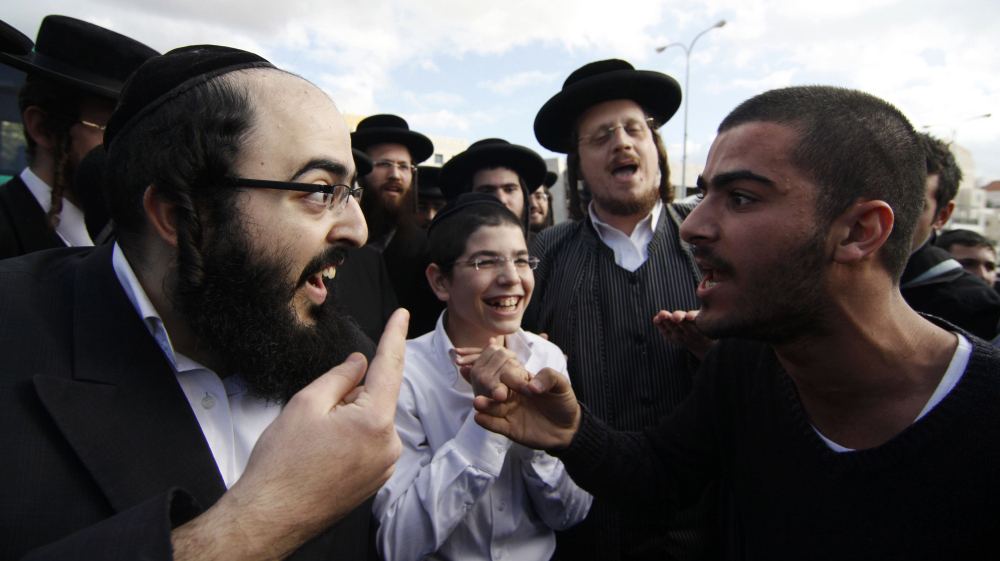 An ultra-Orthodox Jewish man (left) and a secular man argue during a protest against the strict religious codes favored by the ultra-Orthodox in the Israeli city of Beit Shemesh.

According to Israel's President Shimon Peres, a fight is under way, for "the soul of the nation and the essence of the state." But the threat isn't coming from outside Israel. It's over differing interpretations of Judaism.

Recently, a bespectacled 8-year-old girl was filmed by a local TV station being harassed by ultra-Orthodox Jews for — in their view — not dressing modestly enough. The episode took place in Beit Shemesh, a city between Tel Aviv and Jerusalem that has become a symbol of this growing battle in Israel.

In a protest that swelled into the thousands on Tuesday evening, demonstrators in Beit Shemesh rallied against what they say is the imposition of strict codes of religious behavior in communities across this country.

"It's enough, it's enough," says Dov Liptman. "It's reached a point where we have to stop it, and we are going to stop it."

Liptman belongs to the modern Orthodox sect of Judaism. While religiously observant, the modern Orthodox are not as strict as the ultra-Orthodox, or Haredim, who practice gender segregation. Also, many Haredi men devote their days to religious study and are not part of the workforce.

There are many different strands of Judaism, and the Haredim are one of the fastest-growing populations in Israel. In Beit Shemesh, they make up about half of the residents.

Liptman says that as their numbers have grown they have been trying to force their values on the larger community.

"It's not an ultra-Orthodox city," he says. "It's a city for Jews, including ultra-Orthodox. We welcome them, but it's for all the populations."

Most of the girls who study at an all-girls school on the edge of an ultra-Orthodox neighborhood say harassment is a regular occurrence.

"My sister and I walked down this street to school," says 15-year-old Yael. "I was wearing a long-sleeved shirt and a three-quarters-length skirt, and they spat at us. They didn't like the way we were dressed. It happens all the time."

The Haredim also enforce gender segregation on public transport — women are required to sit in the back of the bus.

In Beit Shemesh, the ultra-Orthodox population has even sent out "modesty patrols" to enforce chaste female dress.

Yossi Shain, who heads the department of diplomacy at Tel Aviv University, says religious battles like this one will get worse as the Haredi population gets larger and its political clout grows.

"This is going to be exacerbated in the next few years because the demography is changing," Shain says. "The ultra-Orthodox have become, very much, I would say, intransigent, in some respects. It seems to be very powerful. It plays a very important role in the government, and its leadership has become, much more, I would say, extreme in its views."

The ultra-Orthodox have two political parties that play a pivotal role in Israel's coalition politics. Critics say successive governments have given in to their demands and turned a blind eye to their excesses in the name of political expediency.

Israel has always sought to balance its democratic and Jewish identities, and secular Jews say recent developments have upset the balance.

"It is a battle for the soul of Israel," says Rabbi Shmuel Jakobowitz, an ultra-Orthodox leader.

He says people misunderstand the Haredim. They don't favor a kind of Jewish version of the Iranian theocracy that was ushered in with the Iranian Revolution three decades ago.

"People are understandably afraid of Khomeinism," Jakobowitz says, in a reference to Iran's revolutionary leader, Ayatollah Khomeini. "We as Haredi Jews are definitely not Khomeinist in our attitudes to the contemporary world."

He says that Haredi Jews should be allowed to live the way they wish.

A Jewish Movement to Shroud the Female Form March 17, 2008