Accessibility links
A Brutal Chapter In North Carolina's Eugenics Past One county sterilized more people than any other, partially because the head of welfare believed it was a good option for women at a time when abortion was illegal and the birth control pill didn't yet exist. But in the context of an ugly eugenics campaign, serious questions remain over whether consent was forced. 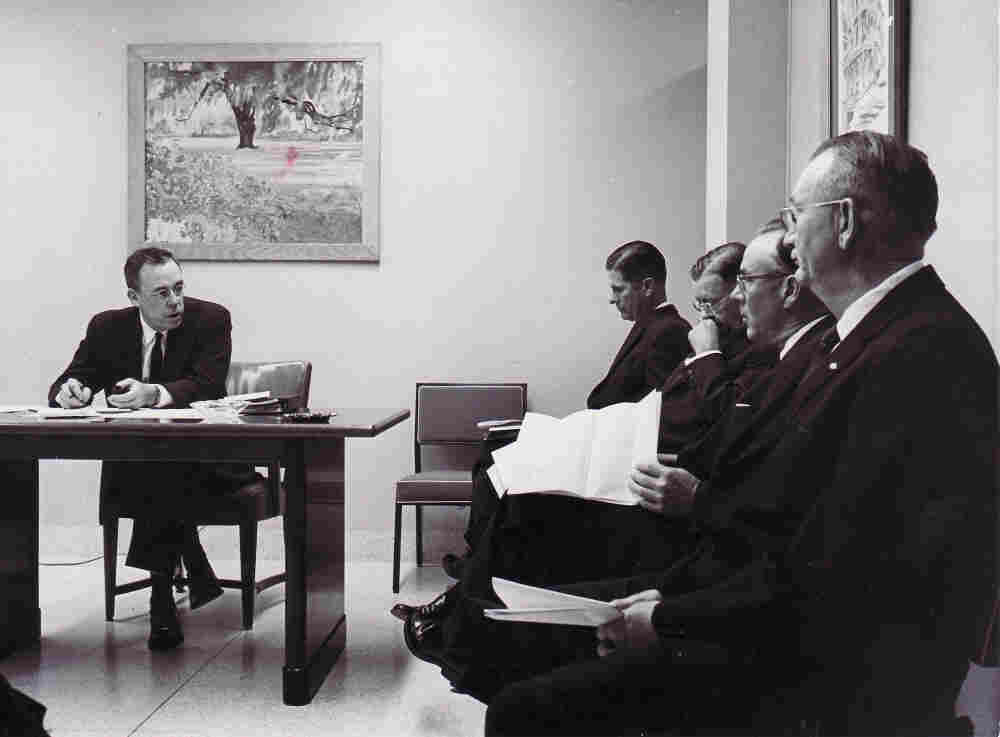 Wallace Kuralt (left), the head of the Mecklenburg County welfare program in North Carolina, speaks to the Welfare Board in 1962. The county sterilized 485 people — about three times more than any other in the state. More than 7,000 people were sterilized in North Carolina. Courtesy Charlotte Observer hide caption

North Carolina is trying to make amends for an ugly chapter in its history during which more than 7,000 people were sterilized — many against their will. At least half of the states had eugenics laws, but only a handful kept their forced sterilization programs active after World War II.

Within North Carolina, one county sterilized three times more people than any other — Mecklenburg, where Charlotte is the county seat. There, 485 people lost their ability to reproduce by order of the North Carolina Eugenics Board.

Exactly how Mecklenburg came to sterilize more than any other county has to do with the way the state referred people for sterilizations. Other states left the referral process to doctors working in prisons and mental hospitals, but only North Carolina gave that power to social workers.

And the head of Mecklenburg's welfare program believed referring women for sterilization was a good option for those who had no other means of birth control at the time. But that initiative was set in the ugly context of eugenics campaigns, and leaves open questions as to whether women really wished to be sterilized.

We don't know the names of the sterilized victims, or why the Eugenics Board sent them to the cold steel of a doctor's table. The board's records are closed to the public.

But what we do know is that the five bureaucrats who were on the board in the 1950s — the peak period for eugenics in North Carolina — didn't drive around the state plucking people off the street for sterilization. They had middlemen doing the leg work, picking candidates and summarizing their lives into terse paragraphs with just enough unsavory detail to make a case.

One girl sterilized by the board is described in her file as "often away from home" and "constantly talks about boyfriends." She was 12.

The middlemen volunteering these girls and women for sterilization were typically social workers, making North Carolina stand out in the history of eugenics laws.

Many have long since passed away, but not all. I found former social worker Merlene Wall in her Charlotte condo. She's 80, and her memory is going — but she's willing to talk.

"It was an interesting time. We stayed busy, we really did," Wall says.

Mecklenburg County was booming then. The typical welfare recipient was a single woman with four or five kids. Politicians and public officials worried that these unwed mothers and their children would overwhelm the system.

The North Carolina Eugenics Board offered them a solution. Since the 1930s, it had sterilized people in mental hospitals and schools for troubled youth. In the '50s, the focus shifted to women on welfare, and on social workers like Wall.

"I keep thinking back about one case, and there were retarded daughters and my gosh ... what a time and what a mess," she says. "And how do you, how do you protect the children that these two females had?"

Wall brings up this one story over and over; I get the impression it was one of the few sterilization cases she was personally involved with. Through the fog of failing memory, it still haunts her.

"But I don't drive myself crazy with it anymore, because I drove myself crazy when I was working [on it]," she says. "It was — it was a hard thing to do. I don't know what the answer is. What do you do? You do what you can, and you do the best that you can. And it's not just protecting the children, you got to protect that mother, too."

A lot of people were wrestling with this question back then. Some powerful elites, including heirs to Procter & Gamble, Hanes Hosiery and R.J. Reynolds Tobacco, formed a group called the Human Betterment League. They published glossy brochures that said things like this:

North Carolina offers its citizens protection in the form of selective sterilization.

The job of parenthood is too much to expect of feebleminded men and women.

"Morons," the league called them. The Human Betterment League made social workers and doctors and public officials feel like humanitarian heroes for sterilizing people. The message spread to many states after World War II, but Mecklenburg County's eugenics effort had something even more.

Read more from the files of North Carolina's Eugenics Board and the cases instituted by Wallace Kuralt, courtesy of Rutgers University history professor Johanna Schoen.

There's a common thread in the case files from the summer of 1955: Many of them note that the sterilization proceedings were instituted by a man named Wallace H. Kuralt. He was the head of the Mecklenburg County public welfare program from 1945 until 1972; the name may sound familiar because his son Charles was a famous journalist for CBS.

Kuralt did not believe women should be sterilized against their will. He was a champion for reproductive rights who wanted to help women prevent pregnancy when they couldn't afford the children they already had.

But this was the '50s: Abortion was illegal, and the birth control pill wasn't available. Existing methods for women were complicated or unreliable. Having your tubes tied, on the other hand, was very reliable.

Kuralt knew his welfare clients couldn't afford to pay a doctor for sterilization, but if he referred them to the Eugenics Board, the government would pay.

Married female, age 38. Two children. Currently pregnant. She wandered out into the woods to have her last child. They sleep on corn shucks and cotton piled in the corner. This couple came to the Welfare Department to request sterilization for the woman.

A Question Of Consent

Such requests did happen, though we'll never know if that woman truly wanted sterilization. Some social workers coerced consent out of women by threatening to withhold welfare benefits.

"Kuralt claimed that nobody in Mecklenburg County ever got sterilized against their will," says Rutgers researcher Johanna Schoen, who spoke to Kuralt in the early 1990s a few years before he died.

Schoen says she doesn't know whether Kuralt read all the petitions.

"In the larger scheme of things, of running the Department of Public Welfare in Mecklenburg County, reading the petitions for eugenic sterilizations probably was a relatively small thing," she says.

It was certainly not small to the hundreds of people forced into sterilization by those petitions, however. Kuralt may have had noble intentions, but not all of his social workers did — and they were the ones in the field. Plus, those Human Betterment League brochures were everywhere.

In 1960, Kuralt didn't need the Eugenics Board anymore after the pill came on the scene. He opened a family planning clinic and gave out free birth control pills; sterilization referrals from Mecklenburg County dropped off dramatically.

Finally, in 1974, the Eugenics Board was quietly disbanded. And 37 years later, state officials have decided to try to compensate some 3,000 or so victims thought to be still alive. The question they're struggling with: How much money could possibly make things right?