Accessibility links
The Real Buddha Bar, Tended By Tokyo Monks It's an old cliche — the boozy customer at the pub, pouring out his woes to the bartender. But at a Tokyo bar run by Buddhist monks, bartenders don't mind hearing their customers' problems — dispensing advice is precisely why they're in business. 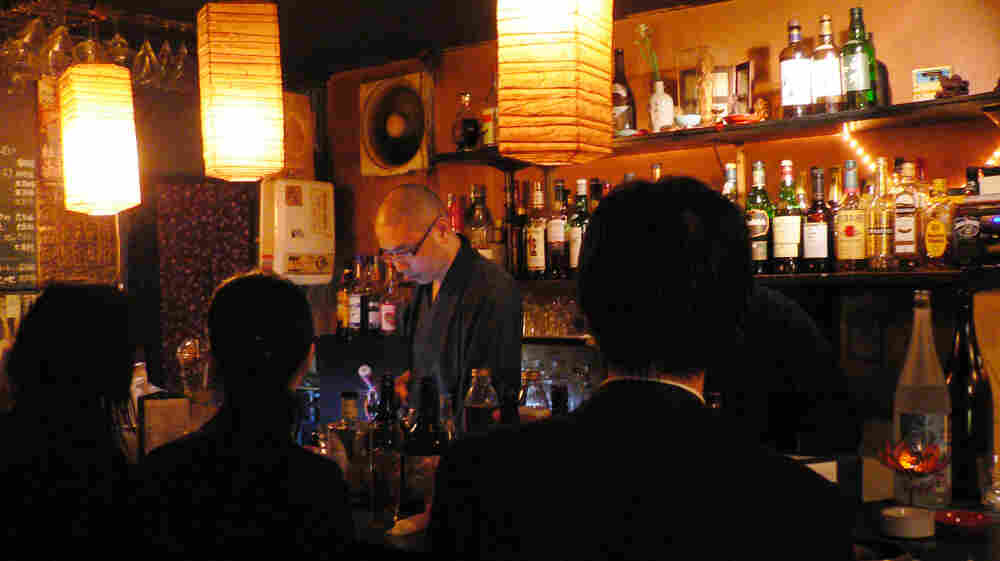 At Vow's Bar in Tokyo, Buddhist monks run the place and serve up advice along with cocktails. Here's a monk serving drinks on Monday. Lucy Craft/NPR hide caption 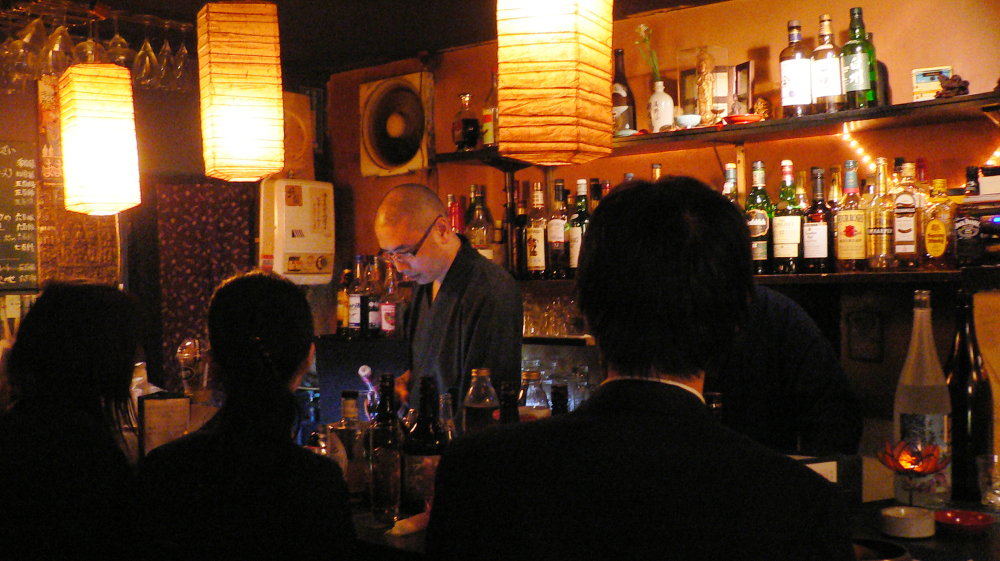 At Vow's Bar in Tokyo, Buddhist monks run the place and serve up advice along with cocktails. Here's a monk serving drinks on Monday.

Another Friday night at this tiny neighborhood watering hole in Tokyo: By 7:30, the bar stools and tables in this cozy joint are filling up; office workers settle in with their cocktails and Kirin beers. And by a little after 8, it's time for the main act.

Vow's Bar in the Yotsuya neighborhood has no house band, no widescreen TV, no jukebox. But it does have a chanting Buddhist monk so tipplers can get a side of sutras with their Singapore Slings or something even more exotic.

A pair of younger monks — conspicuous with their shaved heads, bare feet and religious garb — man the bar. For a non-Buddhist American like me, they shake up an order of the house specialty, shakunetsu jigoku, or "Burning Hell," and boy, they're not kidding.

This city is said to be honeycombed with 10,000 nightspots, most no bigger than an American living room. So to Japanese, it makes perfect sense that Buddhist monks would run their own themed bars, complete with incense, mandala sacred posters and religious altars. As for the monks themselves, they say that tending bar is, ironically, one of the best ways of connecting with their roots.

At the temple, folks are always well-behaved and attentive, no matter how long or boring the sermon is. Here at the bar, they don't like my sermons — they walk out.

"In the old days, temples were the center of community life," says head monk Gugan Taguchi. "But then the temples grew powerful. Monks started getting rich, running funerals. They started to feel superior to their followers. That's not what the job is about."

Getting Out Of The Temple

Trying to suss out just what their job is about has prompted a younger generation of Japanese monks to undertake all sorts of endeavors. They start rock bands, open coffee shops and rent out their temples to theatrical productions and concerts as they search for ways of making themselves as central to their communities as their forefathers were back in the 15th century. To these men of the cloth, in other words, it's high time get out of the temple and go to where their flocks are.

Among tonight's flock is an office worker who said she spent an hour getting here, to seek counsel from the monks. She doesn't offer details, but the monks say they are asked about everything from wayward boyfriends to office politics.

"I tell people not everything is preordained or destiny," one of the younger monks says. "Love and affection change. So sometimes there's no point to trying to hang onto a relationship."

But the transition from austere temple to honky-tonk is not easy, the head monk confesses.

"At the temple, folks are always well-behaved and attentive, no matter how long or boring the sermon is," Taguchi says. "Here at the bar, they don't like my sermons — they walk out."

But for customers looking to get their advice straight up and their spirits lifted, the Buddhist bar is one place where there's always a sympathetic ear — all night long.