Accessibility links
Buddying Up To 'Follies' Star Danny Burstein Burstein has played a wide range of roles, from casino owner Lolly Steinman in HBO's Boardwalk Empire, to his current role as Buddy Plummer in the Broadway revival of Follies. He talks about his lengthy career on stage, screen and television. 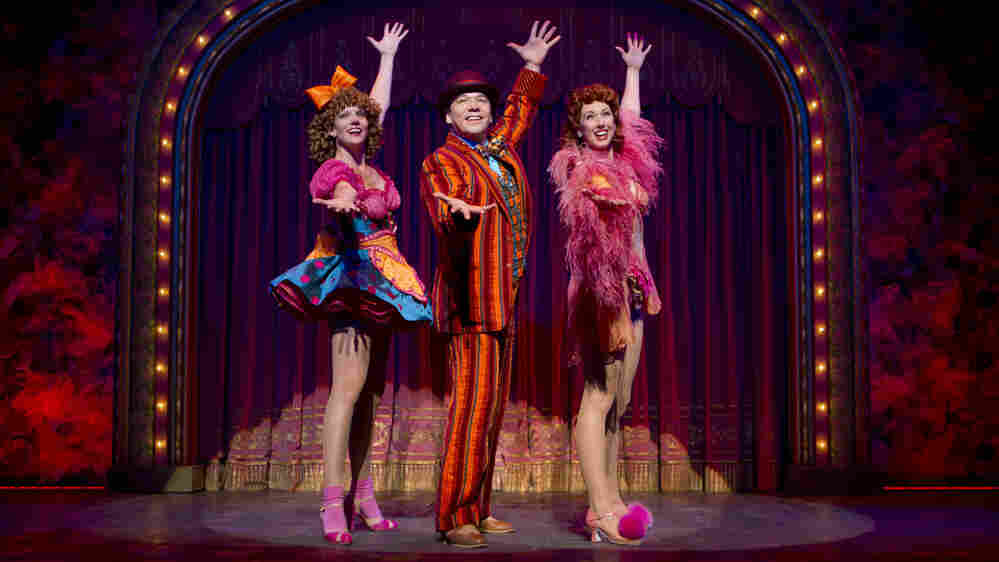 This week on Fresh Air, we're marking the year's end by revisiting some of the most memorable conversations we've had in 2011. This interview was originally broadcast on November 28, 2011.

Before he was cast in the Broadway revival of Follies, actor Danny Burstein had never seen Stephen Sondheim's famous musical, which first hit the Broadway stage in 1971. And he didn't know much about the show, except that everyone in the theater world seemingly had an opinion about it.

Broadway's 'Follies,' Sounding As Sumptuous As Ever

The two-time Tony nominee is now playing salesman Buddy Plummer, a down-on-his-luck kind of guy who's torn between having an affair with his mistress, Margie, and staying in a loveless marriage with his wife, a former Follies chorus girl played by Bernadette Peters. Buddy openly fantasizes about what life could be like, if only he had made different decisions and married a different girl — maybe Margie or even someone else entirely.

Though some runs of Follies have portrayed Buddy as a loser, Burstein says he didn't want to play him that way.

"I don't like whiners — characters who whine on stage — and in reading the script, that's what it seemed like to me, like the character was one sad sack whiner," he says. "And I thought, 'No, he really wants something. He wants the love of his wife, and so he's fighting for that.' So lines that could be read in a very sad way instead could be read in a very positive way."

On Stage, Screen And TV

The versatile actor has played everything from a casino owner in HBO's Boardwalk Empire to sailor Luther Billis in the Broadway revival of South Pacific to a dad from Staten Island in a guest-starring role on the FX comedy Louie — in a part that was partially improvised.

"Half of [a scene I did was] scripted and half [was] just complete improvisation," he says. "And I just love that kind of thing. [Louie creator and star Louis C.K. is] very smart and likes to work quickly, and I had a great time keeping up with him."

Burstein is used to working quickly. In Follies, he sings several songs — including the song and dance number "Buddy's Blues" — at a relentless pace.

"The song just goes on and on and on," he says. "I'll be perfectly honest with you: You know that feeling you get when you run out of breath and you feel the dark curtains coming? Sometimes that happens to me during that number. Because you're just putting everything you have into that. ... It's an exhilarating feeling when you finish it."

Burstein says Sondheim even offered him some advice about the song.

Sondheim also gave Burstein advice on how to read his lines — and then added a few new lines to the show's script.

"He was responsible for adding little lines here and there ... that he'd always wanted, that were in the original script," says Burstein. "About a month ago I got some new lines, and happily. It's really an honor for Stephen to come in and say, 'You know what would work great here?' ... He changed one line from 'It's great to see you' to 'You look sensational.' That's one of my first lines to Bernadette, and I thought, 'Fantastic, of course he would tell her she looks sensational.' There were little things like that, that in the grand scheme of your character make a huge difference."

"I know Stephen is one of those writers that writes things for a reason — there is intelligence behind it. And I tried to get it right for him. I really believe, so strongly, in the fact that he's a genius and that his writing takes care of the actor. So basically every single night, you just try to live up to the brilliant writing."

On the song 'The Right Girl'

"It is famously a very, very difficult song for actors to do. One thing I had to do initially was separate who [I] was talking to [on stage — my mistress or my wife]. So I put the character of Sally off stage left, where Bernadette has just exited. And then the character of Margie I put out center. So my love of Margie is focused towards the audience and my anger is focused at stage left. It sounds simple, but that was a huge epiphany for me, figuring out who I was talking to in the song, because it's not always clear.

"... It was very difficult figuring out which 'Yeah' worked where. We tried many different versions of it. Stephen had us cut it in half at first and taken a lot of the dance music out. And we put all of it back in, then cut some of the dance music ... then he changed the lyric at the end. He brought in a lyric that he had put in, in London: 'You miss me / I knew it / Hey Margie / I blew it / I don't love / the right girl.' That wasn't in the script when we first started in D.C."

On the ending of the song 'Buddy's Blues'

"I thought it would be interesting if he finished the song big — reaching out to the audience saying 'Love me, love me' because no one has ever really loved [him], and then realizing that he's getting applause for something that is very empty. And I thought maybe he would just leer at the audience — because this was all a facade — and just walk off stage. But that didn't quite work. That was too heavy. So now it's just like, 'This is a sad facade. Oh well. Now I have to go back to the rest of my life.' That's the feeling that it is now, and I just sort of walk off sadly."

"He just wants to be in a happy marriage, and he wants to have a normal type of life. But unfortunately his wife of almost 30 years has not requited his love. She's been in love with somebody else all that time — and she's grown sadder and sadder, but he still has this pipe dream that their love will somehow be all right and the marriage will be all right, even though it probably won't, sadly."

"[With his lyrics,] you expect him to take a right and he takes a left. He does that with melodies as well. And actually, when you're learning the music — and I'm sure I can speak for every actor who's learned a Sondheim song — you're secretly cursing Stephen Sondheim. Because it's so damn hard to learn his music."