Accessibility links
Gas Pains? U.S. Diesel, Gas Exports Surpass Imports For the first time since Harry Truman was president, the country is exporting more petroleum products than it imports. Domestic demand for diesel and gasoline is down while production is up. That's made it difficult for some refineries to stay in business. 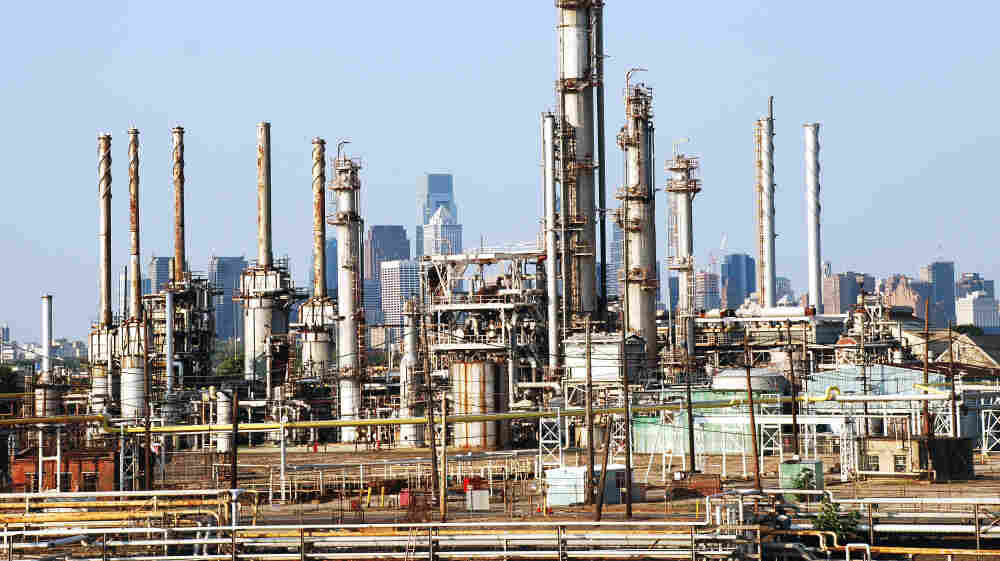 Distillation towers, tanks and other equipment at Sunoco's sprawling refinery on the banks of the Schuylkill River on Aug. 3, 2009. Sunoco is selling off two refineries and, in September, announced it would get out of the refining business. Richard Richtmyer/AP hide caption

For the first time in more than six decades, the United States is exporting more gasoline and diesel than it imports.

To be clear, we're talking about finished petroleum products, not crude oil. The U.S. still imports about half the crude it consumes.

Refineries are touting this new export statistic — after all, gasoline and diesel are manufactured products. They say a boost in exports keeps more manufacturing jobs in the U.S. But one reason exports are increasing is that demand for gas in this country is declining.

People like Rachel Ezekiel-Fishbein of Elkins Park, Pa., are choosing to drive more efficient cars and consuming less gas. She stopped driving a Honda Odyssey minivan that gets about 14 miles per gallon in the city. Now, she drives a red Prius hybrid that's getting about 40 mpg.

In the process, Ezekiel-Fishbein is saving more than $2,000 a year and buying 700 fewer gallons of gasoline. And she's not alone. Department of Energy statistics show Americans are using less gasoline these days. Consumption peaked in 2007 and has been declining since.

"It's sort of an obvious choice," says Ezekiel-Fishbein. "It's better for the Earth ... It's better for your budget, you're teaching your kids good values. What's the downside to this choice?"

The downside falls to refineries. As it happens, while demand was declining, refineries were becoming more efficient, actually boosting their production. It's basic economics: Declining demand plus increasing production is not a winning formula.

Now the country stands to lose some refineries. Sunoco and ConocoPhillips have announced that three refineries on the outskirts of Philadelphia will shut down if the companies can't find buyers. That could put an estimated 2,600 people out of work.

Members of Congress recently met with the companies. Rep. Allyson Schwartz — a Democrat from the Philadelphia suburbs — told executives, "We want you to sell to someone who can actually keep these refineries alive, keep these jobs here."

So far, no buyers. The refineries are preparing to shut down so the companies can stem the tens of millions of dollars of red ink flowing from them. Exporting gasoline and diesel has become less a luxury for refiners and more of a survival strategy.

It doesn't appear that domestic demand will pick up anytime soon.

"We're going to see the lowest gasoline consumption in January of 2012 that we've seen since January of 2000," predicts Tom Kloza, chief oil analyst at the Oil Price Information Service.

When you consider that the U.S. population increased by 30 million in those 12 years and that consumption is still declining, you get a good idea of just how significant this is. Kloza says the sluggish economy also plays a big role in demand.

"Maybe we are dealing with an awful lot of people who are underemployed or don't show up in the unemployment ranks, who simply can't drive because they have no place to go and no place to work," says Kloza.

Philadelphia-based Sunoco isn't just selling off two refineries. In September, the company announced it would get out of the refining business altogether.

"It's a business that's not designed for the faint of heart," says Charles Drevna, president of the National Petrochemical & Refiners Association.

"We need to jump-start the economy. We need to get people back to work," says Drevna. "People will get to start driving again, they'll have more disposable income, they'll take more vacations." And then they'll consume more of the fuel his member companies produce.

But that's not the trend statistics are showing. A report from MasterCard SpendingPulse recently showed that for the week ending Dec. 16, gasoline consumption was down 4.6 percent over the same week a year ago.