Accessibility links
Will Islamist Politicians Hamper Egyptian Tourism? Egypt's tourist industry is crucial to its economy, and the number of visitors has fallen off sharply this year. Islamists are now expected to hold a majority of seats in parliament, and some have suggested banning alcohol and segregating beaches by sex. 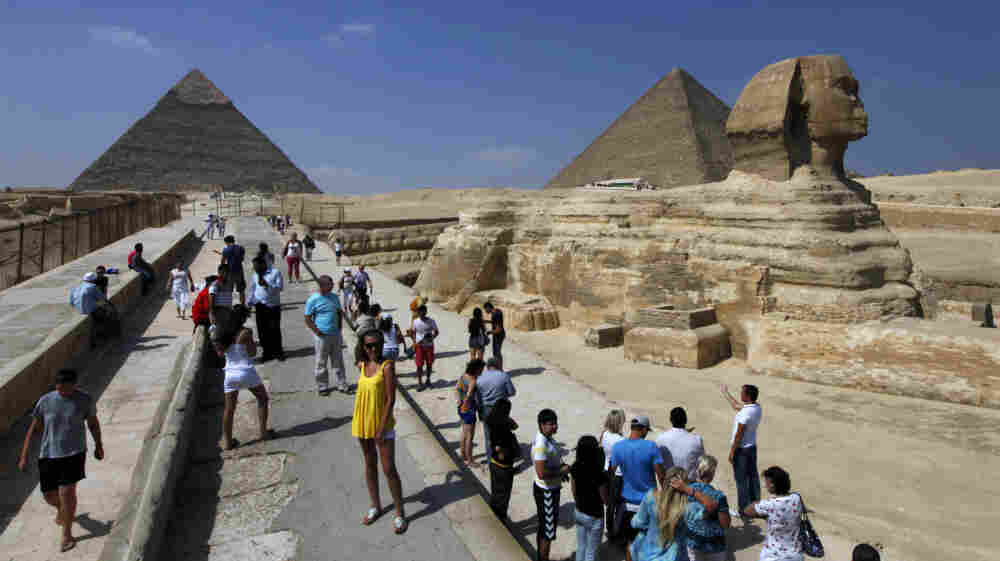 Tourists visit the Sphinx and the Pyramids of Giza near Cairo. Tourist numbers have plummeted this year with the political turmoil in Egypt. Now, some Islamist politicians are proposing rules that could discourage visitors. Jamal Saidi/Reuters /Landov hide caption 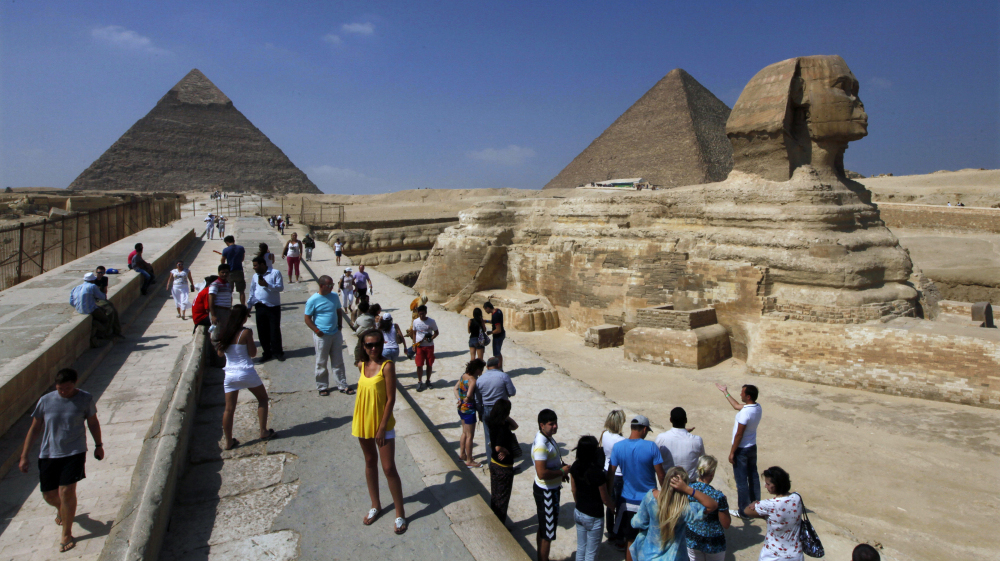 Tourists visit the Sphinx and the Pyramids of Giza near Cairo. Tourist numbers have plummeted this year with the political turmoil in Egypt. Now, some Islamist politicians are proposing rules that could discourage visitors.

Islamists are widely expected to hold a majority of seats in Egypt's new parliament when it convenes next month, and a leading priority is the sagging economy. 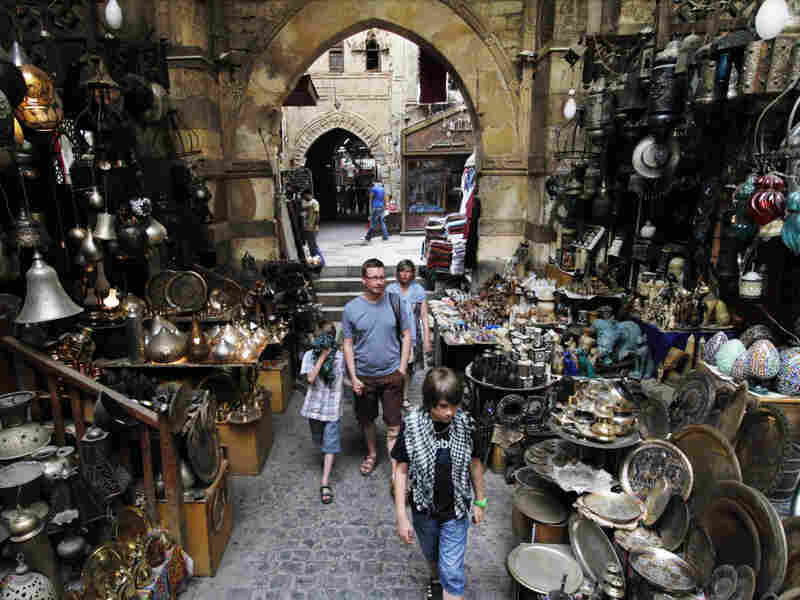 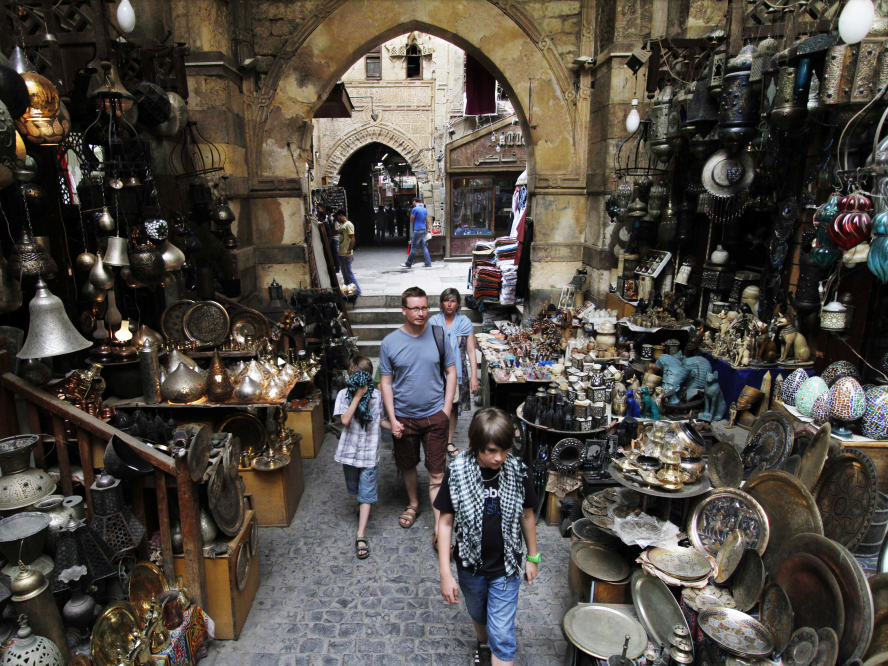 Foreign tourists stroll through the Khan el-Khalili market in Cairo.

Yet their conservative religious approach could threaten a key pillar of Egypt's economy: Western tourists.

The Muslim Brotherhood's Freedom and Justice Party received many votes from vendors at the Khan el-Khalili market, a hub for tourists in Cairo with narrow twisting lanes and soaring minarets.

Mohammed Reda has stickers of the party plastered next to the pyramid paperweights and statuettes he sells. He says the market's merchants are counting on the Islamists to bring back business to their neighborhood.

Political unrest and violence have kept tourists away from this and other Egyptian landmarks. Officials say the number of visitors this holiday season is down by more than one-third compared to the same time last year.

Vendors clamor for the few tourists who do wander through the shop-filled alleys. They offer trinkets for a dollar or two in a desperate attempt to make a sale.

The vendors want the new parliament to make reinvigorating tourism a top priority. They see the Islamists as honest brokers who are not sullied by the greed and corruption that plagued the government of the former president, Hosni Mubarak.

To swim, you wear a bathing costume. To have dinner, part of [Western] culture is to have a drink with the dinner. This is the kind of information people have to understand that do not understand the industry. And you don't change the culture of people.

But some of the things newly elected Islamist lawmakers are saying have many in Egypt's tourist trade scratching their heads.

Recently, Brotherhood party member Azza al-Jarf told a crowd of supporters in front of the Great Pyramids that tourists can do without alcohol when they come to Egypt.

Ultra-conservative Salafist candidates have taken it a step further by demanding a ban on all alcohol sales. They've also called for segregating Egypt's beaches by sex and banning revealing swimwear.

Such proposals will make the tourism slump only worse, predicts Mohammed el-Gendy, who sells religious trinkets in the Khan el-Khalili market.

"These are irresponsible statements in my opinion that, even if said by responsible people, I believe they do not understand the set-up of the industry and the dynamics of it," says Hisham Zaazou, the senior assistant tourism minister.

The math is simple, Zaazou says: Four out of five tourists who come to Egypt do so for leisure vacations at the beach rather than to visit the pyramids or other historical sites. More than three-quarters of all visitors to Egypt are from Europe, he says, they expect to be able to enjoy the beach as they would at home.

"To swim, you wear a bathing costume. To have dinner, part of the culture is to have a drink with the dinner. ... This is the kind of information people have to understand that do not understand the industry. And you don't change the culture of people," Zaazou says.

But al-Jarf, the Islamist lawmaker, says Egyptian officials need to rethink their approach to tourism. She argues that appealing to Muslim visitors abroad and domestically will boost tourism, as would hosting more international conferences.

She adds that separating beaches by sex and curbing public consumption of alcohol won't affect these new markets or even the old ones.

Such pronouncements are naive, says Elhamy el-Zayat, who chairs the Egyptian Tourism Federation and runs a company specializing in conference tourism. He says he's talked with the Muslim Brotherhood and the Salafists at length about their tourism proposals and why they won't work.

He believes that once the Islamists are in power and faced with the financial reality, they'll stop trying to make Egyptian tourists conform to a more conservative Islamic lifestyle.

"If they were not pragmatic, could they have collected so many votes?" el-Zayat says. "They were very pragmatic and very sly, we have to remember this."

Hisham Galal, a vendor in the Khan el-Khalili market, warns that if the Islamists don't back down, he and many other Egyptians will hold mass protests to force them out of office, just like they did with Mubarak.