Accessibility links
'Haters' Are Going To Hate This Story There have always been Haters, but with the ubiquity of the Internet, Haters now gather together, vent and feed on one another, and hone their craftiness — without ever leaving home. In fact, some people are going to hate this story, but that's OK, because haters gonna hate!

'Haters' Are Going To Hate This Story

'Haters' Are Going To Hate This Story 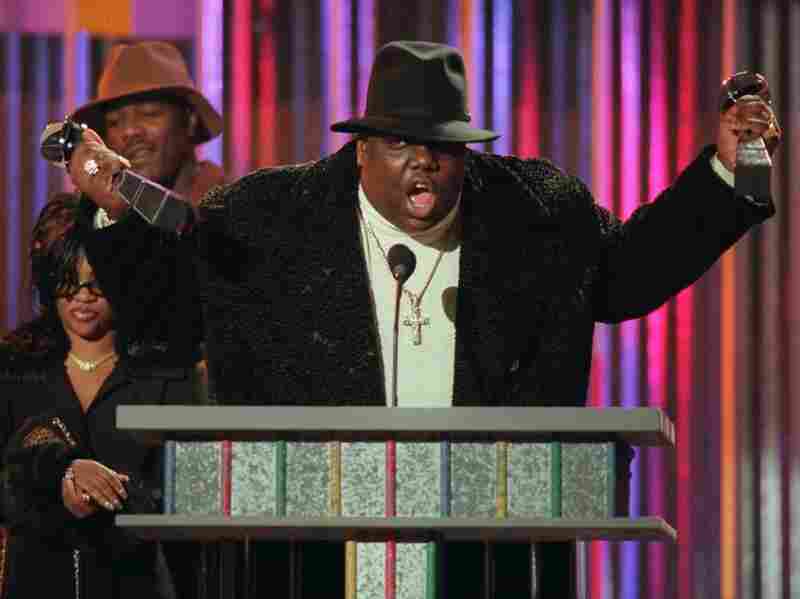 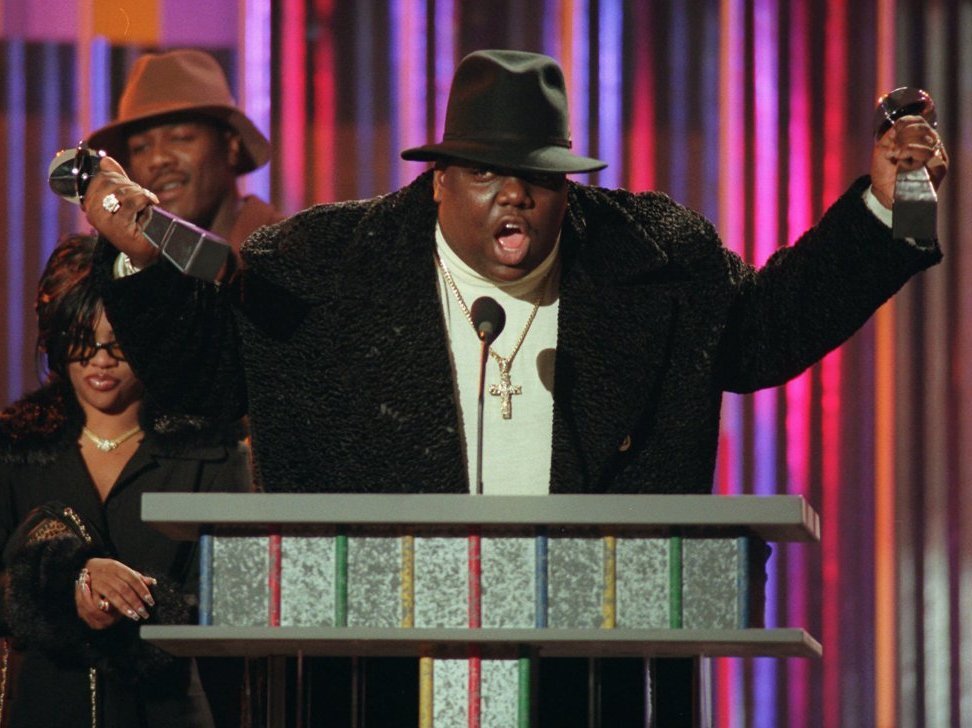 The word "Hater" — as it's often used today — is derived from the term "Player Hater," a phrase popularized by late rapper Notorious B.I.G., shown here clutching his Billboard Music Awards in 1995.

Fox has a new sitcom: I Hate My Teenage Daughter. A recent issue of Us magazine tells us "Why Scarlett Johansson Hates Blake Lively." Psychology Today explains "Why We Hate Airport Security." Dick Meyer, formerly of NPR and now executive producer for news services at BBC America, wrote a provocative book called Why We Hate Us.

Mention lightning-rod superstars Tim Tebow, Justin Bieber, Lady Gaga or umpteen others, and all the Haters come out to hate. You see Haters tweeting about Twilight and frequenting nearly every message board. "Facebook Needs a Hate Button," comedian Michael Lake writes on the Funny or Die website. The meme "Haters Gonna Hate" is omnipresent.

Haters and hating are popular fodder for singers and songwriters, such as Miranda Brooke, who just debuted a new single, "Hater."

Sure, there have always been Haters.

They used to find each other at public meetings and in specialty 'zines, but with the ubiquity of the Internet, Haters now gather together, and vent and feed on one another, and hone their craftiness — without ever leaving home.

And by Haters, we mean people who say they hate everything. We're not talking about evildoers or murderers. Just Haters.

Quotations About Haters, Through The Ages

Literature professors are quick to teach students about lovers — Romeo and Juliet; Tristan and Isolde; Prince Eric and Ariel, the Little Mermaid. But history is full of haters, too. And poets point them out to the rest of us. Here are five quotes about various kinds of haters:

Strange inconsistency of temperament, which makes the same men lovers of sloth and haters of tranquility. – Tacitus (c. 56-120 A.D.)

What's the meaning of all the pious clamor, condemning cocks and hens? Those who have no teeth are the greatest meat-haters. – Franz Grillparzer (1791-1872)

Haters run the gamut — from disrupters at political rallies to sign makers at sports contests, from erudite misanthropes to semiliterate missive senders, from stand-up comedy hecklers to dish-served-cold revenge-seekers.

They can be passionate or passive-aggressive. They can be smart or stupid. But nowadays they seem to be everywhere.

What is their point? "Haters want to be feared and heard," says Brian Britt, a professor of religious studies at Virginia Tech University who studies the evolution of hate. "Their use of outrageous behaviors is designed strategically to get attention. They violate norms of 'niceness' and civil behavior in order to make a point."

Haters know how to get attention on the Internet. Call it trolling — or, as Lawrence Dorfman calls it, snarkiness.

Author of The Snark Handbook and Snark! The Herald Angels Sing, Dorfman says that "people are just completely fed up and are looking for any way to shield themselves from the constant inundation of annoying behaviors that we're subjected to every minute of every day. ... Snark is a defense mechanism."

There is much to snipe at and gripe about in contemporary America, Dorfman says. Here is part of his dis list:

* 24-Hour News Feeds: "A constant barrage of 'information' from every nook and cranny, seemingly all bad or inane, as the purveyors of this stuff need to fill the airwaves."

* Too Much Interconnectedness: "Twitter, Tumblr, Facebook, IM-ing, texting, sexting, genu-flexting. We really don't have that much to say, do we?"

* A Predilection Toward Ease: "Hey, just Google it!"

* An Overpowering Sense of Entitlement: "There's 300 million of us ... We can't all be the center of the universe. Laws, traffic signs, lines ... these need to be obeyed ... It's called civilization."

"I also think that the faceless aspect of our daily interaction gives rise to our collective disdain for our fellow humans," Dorfman says. "With more people telecommuting ... coupled with our becoming an online consumer nation ... coupled with our ridiculous fascination for the myriad of hand-held devices available ... one practically never needs to leave the house. And left to his own devices, man will always believe the worst of his fellow man."

He adds, "It's really quite frustrating ... and it's that frustration that has made us all very, very snarky. But then, I may just be a little cynical."

A Recent History Of Haters

Up against the contemporary cultural movements of self-confidence and self-esteem, the motives of people who hate are called into question, leading to Facebook pages with titles such as "If You Have Haters, You Must Be Doing Something Right."

The reasoning: Haters must be jealous or envious. So they are actually, in the zeitgeist, intensified fans. It may be a topsy-turvy take on the idea of hate, but for many self-confident people, it's a useful one. The word has been flipped — like the way "sick" can mean "cool."

This creative spin on Haters has its origins in the music world. Hip-hop historian Marcus Reeves, author of Somebody Scream!: Rap Music's Rise to Prominence in the Aftershock of Black Power, explains that the word "Hater" — as it's often used today — is derived from the term "Player Hater."

That phrase first surfaced in the late 1990s, as hip-hop was becoming mainstream, Reeves says. "It was popularized by Notorious B.I.G. who, before his death, was on the verge of blowing up the MC-as-pimp-player-hustler persona."

As rappers and rhythm-and-blues singers began to be seen "as working-class hustlers or urban players of a system set up to keep them out," Reeves says, "Player Hater was the term given to those who work against or criticize the make-it-by-any-means-necessary ethos of a successful rapper or any successful person."

The phrase was eventually shortened to Hater, Reeves says, encompassing "anyone who criticized — even constructively — a person's success or business practices."

The problem, he points out, was that the term "began to be used to shut down any criticism or examination of how one obtained success, like a rapper glorifying drug-dealing under the guise of showing listeners how real the streets are."

And so, Reeves says, today "Hater" is used "to brush off perceived negative comments or someone perceived to be working against you, whether you're a rapper or a cute individual who thinks folks are jealous of your self-perceived beauty."

In a way, this Hater-means-admirer twist is appropriate for our Ironic Age.

"My impression of the current anti-Hater trend is that at best it represents a desire to overcome negativity to express a positive message," says Virginia Tech's Brian Britt, "and that at worst it depicts Haters as anyone 'we' don't like. In this vein, we are told to 'hate Haters' and not to be too critical or to think too hard about what's wrong in the world."

Society, Britt says, "should deal with Haters by balancing the competing values of freedom of speech on the one hand, and the safety and dignity of the public on the other."

And if Haters sometimes act as "serious critics of the status quo whose behaviors fall short of hurting other people," Britt says, "then they can be valuable to a free and democratic society."

From another angle, Britt points out that the term "hate speech" is now a slur in its own right. "We hear politicians accuse each other of 'hate speech,' and in a culture that prizes itself on civility and niceness — however superficial — there is no worse insult or act of hate than to accuse someone of being a Hater."

And this is where the fomenting culture of hate speech and Haters turns back on itself, Britt adds. "The logic goes like this: Hate is bad, so we hate hate, but in hating hate, we become Haters ourselves."

Hank Stuever, TV critic at The Washington Post, may have a solution. After reviewing I Hate My Teenage Daughter in December, Stuever posted this observation on his Facebook wall: "One thing I didn't get around to saying is how much I don't like the prolific use of the word 'hate' in our conversations now. As in 'I hate those cupcakes.' Or 'I hate when people park like that.' "