Accessibility links
Happy Holidays? Indeed, For Some Stuck At Work Around half of workers said they'd be in the office during the week between Christmas and New Year's. For those who come in, it's a great time to tidy up or catch up with coworkers. And the paycheck isn't bad: "[You] need a wheelbarrow to take it to the bank," says one holiday worker. 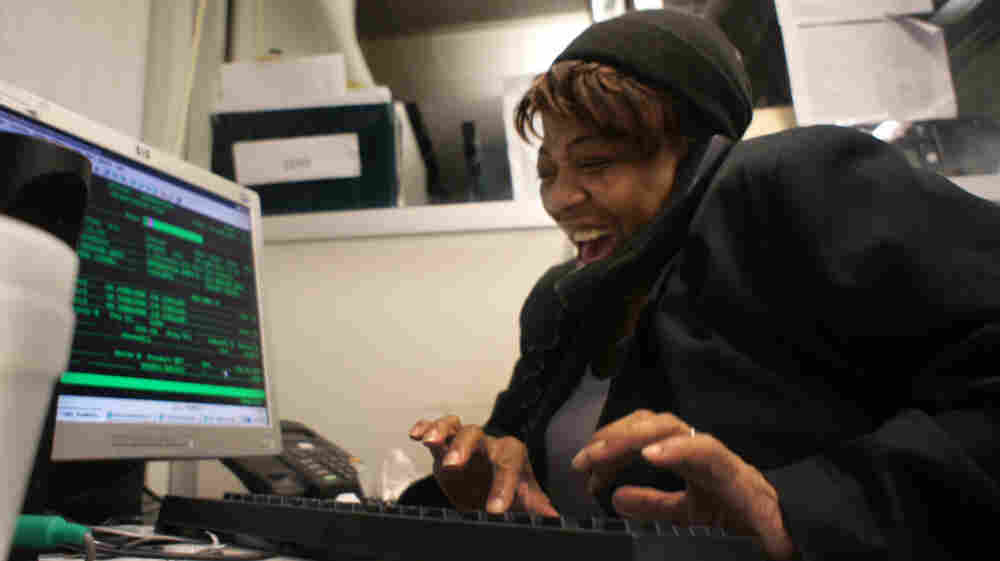 Louise Tucker-Mitchell laughs on the phone with a customer at Enterprise Rent-A-Car at Reagan National Airport in Washington, D.C. She says she likes working the week between Christmas and New Year's, as it's calmer and a good time to catch up. Sara Carothers/NPR hide caption 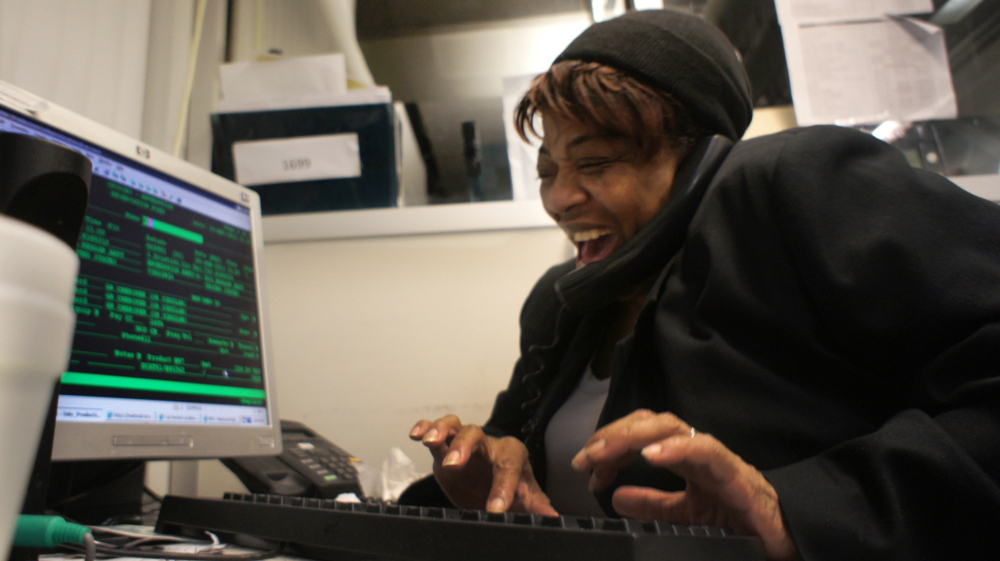 Louise Tucker-Mitchell laughs on the phone with a customer at Enterprise Rent-A-Car at Reagan National Airport in Washington, D.C. She says she likes working the week between Christmas and New Year's, as it's calmer and a good time to catch up.

It's the last workweek of the year, and just about half of American workers have been in the office.

If that sounds like a drag, well, meet Louise Tucker-Mitchell.

She works for Enterprise Rent-A-Car at Washington, D.C.'s Reagan National Airport. For her, at least, being stuck at work between the holidays is a secret pleasure.

Things are unusually quiet. Traffic is uncharacteristically light. "This is the free time when you can sort everything out and get it done," she says.

Flexible workplace company Regus surveyed 12,000 employees in 85 countries asking whether they'd be coming into the office between Christmas and New Year's Day. Here's how people at workplaces with under 50 employees responded around the world:

Like going through piles of unfiled papers, sorting through the lost and found and calling owners of the items and, of course, enjoying office holiday potlucks with her colleagues. There's roast chicken, sometimes turkey, green beans, and lots of talk about cocktails and a sweet wine called Moscato, Tucker-Mitchell's favorite.

"Honey, let me tell you something: She's the smallest one that works here," she says of a co-worker. "If you see the rest of us, you know we eat."

Rentals spike before and after the holidays. But in between, it's almost like having a holiday at work — almost.

"Oh! We got a call," she says with surprise as the phone rings. "Thank you for choosing Enterprise Service in Ronald Reagan National Airport. This is Louise. How may I help you?"

There is, of course, another benefit to working on holidays: Pay is double time and a half.

"I love it. I love working holidays," Tucker-Mitchell says. "You know how fat that check looks? [You] need a wheelbarrow to take it to the bank."

According to a recent survey, 56 percent of U.S. workers had planned to go into the office this week. Many said they'd use the time to catch up on work, but more than a third said they didn't expect to be productive.

"What we've found is that [for] most people, the offices are open, business is still going, but really there's not much work done," says Andrew Brown, communications director for Regus, a flexible workspace company that commissioned the survey.

Brown says it's worth debating whether most businesses should be open at all. He says he expects in coming years that more employers will opt to shut down.

But shutting down is not an option for everyone. And Adam Treiger, an employment lawyer in California, says companies aren't obligated to pay their nonsalaried workers if they close.

"Certainly there are issues of morale, too, and the way employees feel about holiday closures," Treiger says. "You don't want to necessarily put your employees out of work and not [pay them] during that time when they need the money to buy gifts and other things. So that's an issue, too, that a lot of employers have to think about."

A New Year, And A Fresh Start

Indeed, Treiger himself worked the week between Christmas and New Year's.

"As a partner in my law firm, I'm not an employee, so I'm always working," he says with a laugh.

Nor is it quitting time for Trip Kucera in Boston, who says he loves working this week. With very few meetings to break up his day, the business analyst gets a chance to go through what he estimates is 3 inches of paper stacked on his desk.

"I'm kind of a messy person at the desk," he says. "But I like things clean."

Kucera is also tackling unanswered emails, and it all makes him feel like he can start the new year fresh. He says he might even have a chance to catch up with some colleagues.

Not alone at all; an easy workweek loves company.