Accessibility links
Confused About The Iowa Caucuses? Here's A Guide On Jan. 3, all across Iowa, the campaigning ends and the voting begins. Thousands of Iowans will enter gyms, libraries and private homes to participate in a ritual of the American political system. 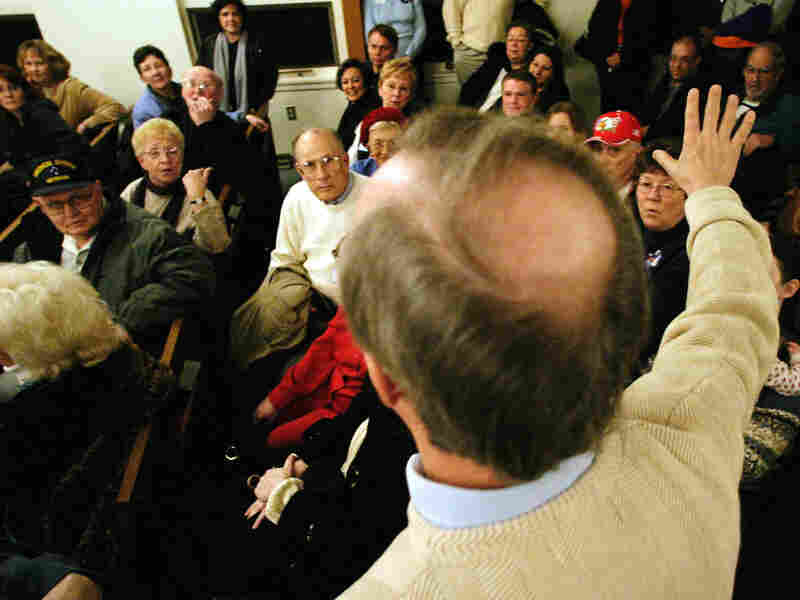 On Jan. 3, Iowans will caucus at 1,774 precincts across the state, in the first contest of the 2012 presidential nominating process. Above, Iowans caucus in 2004 at St. John's United Methodist Church in Des Moines, Precinct 87. Shaun Heasley/Getty Images hide caption 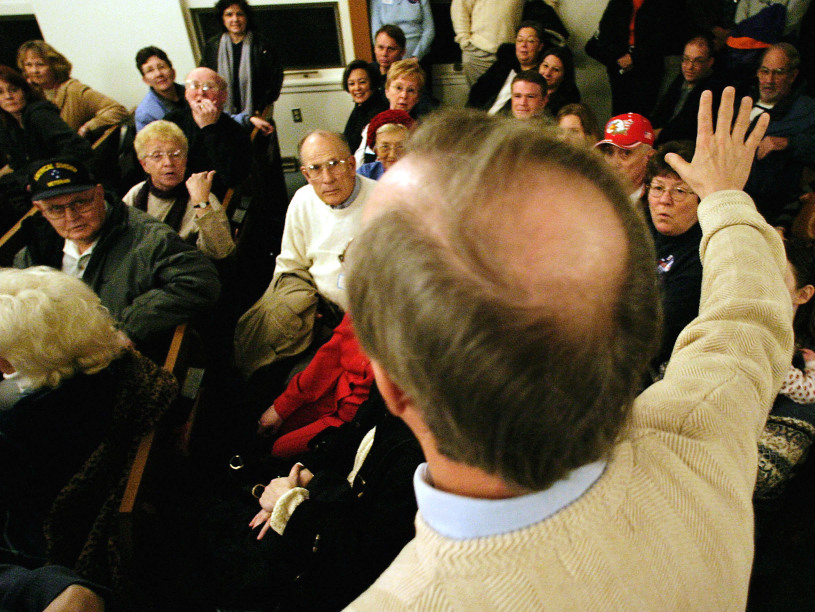 On Jan. 3, Iowans will caucus at 1,774 precincts across the state, in the first contest of the 2012 presidential nominating process. Above, Iowans caucus in 2004 at St. John's United Methodist Church in Des Moines, Precinct 87.

At 7 p.m. Central time on Tuesday, Jan. 3, the first contest of the 2012 presidential nominating process finally kicks into gear in Iowa.

As you've heard countless times, Iowans vote in caucuses, which are small political meetings held in 1,774 locations scattered around the state.

A primary election feels very much like any other election day. Polls are open all day, and voters show up when they want. But a caucus is actually a meeting, with a schedule: It starts at a certain time; party business is conducted; and, at some point, voting occurs.

Matt Strawn, the chairman of the Iowa Republican Party, starts with the basics.

"Well, the first thing is you need to be obviously an Iowa resident who is eligible to vote in the state of Iowa," he says.

You need to show up at the proper precinct, based on your address. You can participate if you'll be 18 years old on Election Day of November 2012. If you're a registered Republican, your name should already be on the list. If not, you can register as a member of the party on the spot, regardless of your political affiliation.

The caucus then gets under way. There will be an explanation of how the evening will proceed, then speeches.

"Each campaign has the opportunity to have one surrogate speak for anywhere from two to five minutes — it depends on what the precinct chair in that precinct allows," says Strawn. "And then after those speeches, there's no questions. ... You go straight to the vote."

On Tuesday, Jan. 3, Iowa caucus participants will gather at 1,774 precincts across the state, beginning at 7 p.m. local time. Both parties will caucus, though the event will be much less dramatic for the Democrats, since President Obama is seeking re-election. Here's what will happen at the GOP caucuses:

Source: The Republican Party of Iowa

Voters get a blank slip of paper, and they write the surname of the candidate of their choice on it. Then, they drop it in a ballot box.

"In my particular precinct, up in Ankeny, which is a suburb of Des Moines, we literally have a sequined red, white and blue shoebox with a hole slit in the top that we pass around the room," he says. "Sounds very cliche and Iowa, but it's the truth — it's what we do."

Then each precinct counts the votes in front of the caucus attendees. Results are then called in to the state party, where precinct totals are added up and released to the public.

It's important to note that no delegates attached to candidates are selected in the Iowa GOP caucuses, so the event is really a beauty contest — albeit one very important to the process of selecting a nominee.

"[It's] a very significant beauty contest, straw poll, you know, whatever terminology you want to use," Strawn says.

And the Democrats have their own set of rules for caucuses. This year, though, the most obvious difference is that there's no contest for the nomination; President Obama has no competition for the nomination. The Iowa party chairwoman, Sue Dvorsky, says the highlight of the evening will be an appearance by the president, via video link, to every single Democratic caucus gathering.

"He's going to talk to Iowa Democrats about why this matters, about what he's done, about what he wants to do moving forward, and then ask them for their help — exactly the way he did four years ago," she says.

Dvorsky adds that Democrats will be focusing on congressional and other races, as well.

Right now, above-freezing temperatures are forecast for much of Iowa on Tuesday. That could help turnout — which both Republicans and Democrats say would give them a boost at the very beginning of an election year.