Accessibility links
Midwest Learns To Manufacture More With Less It was a good year for manufacturing, especially in the Midwest. The Federal Reserve says Midwestern manufacturing has seen 28 consecutive months of growth — at higher rates than the rest of the country. But that doesn't mean that jobs lost during the recession are returning. The jobs that are available often call for highly skilled workers. 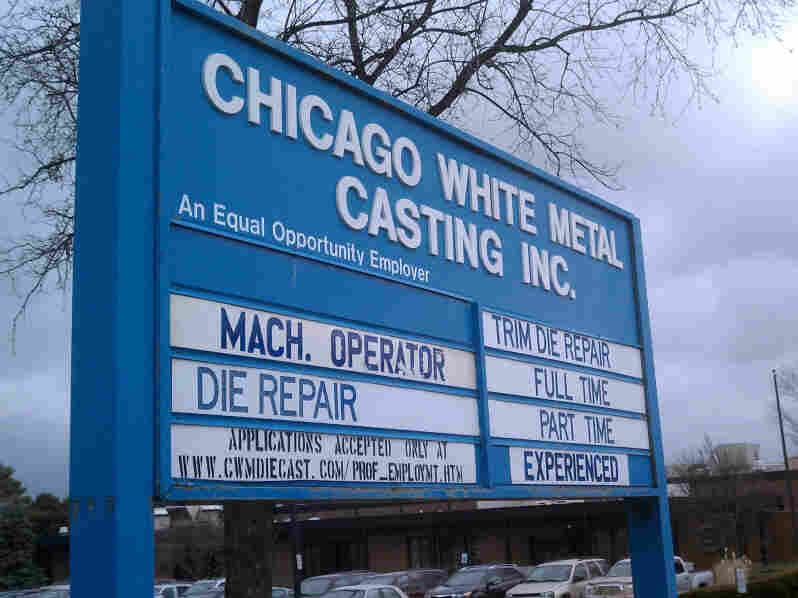 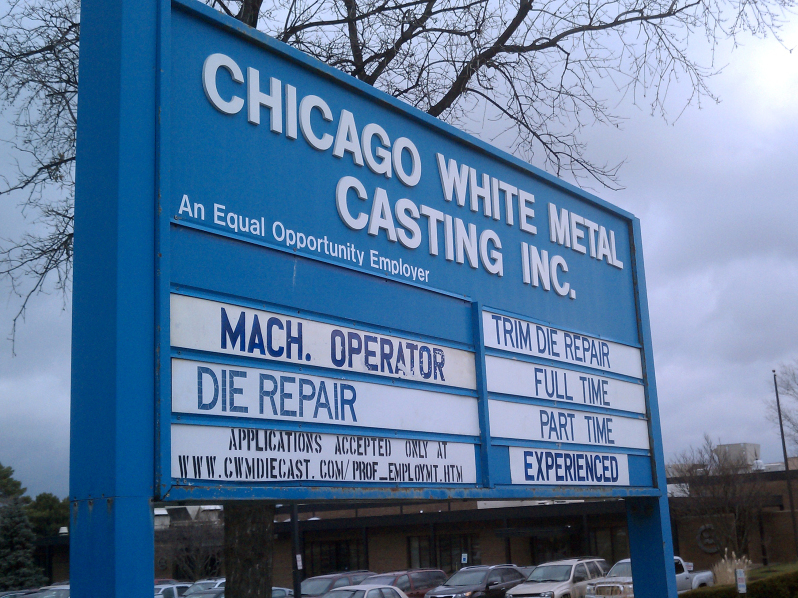 Midwestern manufacturers are bouncing back — revenues are up at Chicago White Metal Casting for the second year in a row. And the company is hiring, but mainly specialists, such as die-cast machinists and the people with the skills to fix those machines.

The floor's a lot louder than it was a few years ago. At Chicago White Metal Casting, revenue is up 4 percent from 2010 — and that year was better than the one before.

Chicago White Metal Casting isn't alone: Most U.S. manufacturing came back strong this year. Nowhere was that more evident than across the Midwest. But even if it was a good year for industry, not many of the jobs lost during the recent recession returned.

"We're seeing a great demand for some of the machinery that's made right here in the Midwest," says Bill Strauss, a senior economist with the Federal Reserve Bank of Chicago. He's talking about not just small parts but cars, tractors, mining equipment and steel.

As the Federal Reserve measures it, Midwestern manufacturing has enjoyed 28 months of growth — at rates much better than the national average and the overall economy.

"The kind of goods that we produce here are very high-value-added goods — you know, we have the Caterpillar 797B made here in the state of Illinois," Strauss says. "It's the largest truck made in the world, weighing over a million pounds, costing in the neighborhood of $7 million, $8 million."

Imagine how much steel goes into that.

So with all those orders, where are the jobs?

During the recession, one out of every four jobs lost was in manufacturing — that's 2.3 million jobs. As of last November, though, just 308,000 had returned.

Why so few? Remember the mantra "produce more with less"? Many manufacturers practically perfected that during this recession.

Take Chicago White Metal Casting. Treiber says the company had to be focused on productivity to keep up with overseas competition. So he updated machines, focused on staff training and improved quality control.

And Treiber actually is hiring. But he's looking for specialists, such as die-cast machinists or those who fix those machines.

And that's the problem right now with manufacturing: With better productivity, the need is for more skilled workers — not just machinists, but welders, designers and, most of all, people who know how to operate the new computerized machines on factory floors.

"What about those 2 million people that lost jobs?" Strauss asks. "Can't you hire those back? What you find out from people is that even though they were classified as being in manufacturing, many of them lack the kind of skills that are required in this more 21st century manufacturing."

Strauss says he's optimistic that the manufacturing sector will continue to do well in the coming year. But he also says it will need more workers who have the exact skills needed to do the new jobs.