Accessibility links
'The Last Nude': A Passionate Portrait Of An Artist And Her Muse Ellis Avery's novel The Last Nude imagines the hidden affair between art deco painter Tamara de Lempicka and her model Rafaela. From afar, the boldly colored paintings appear polished and cool-headed, but up close, Avery says, you can see they were created in a state of passion. 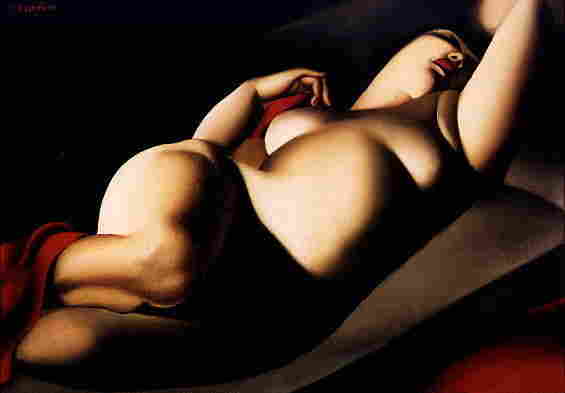 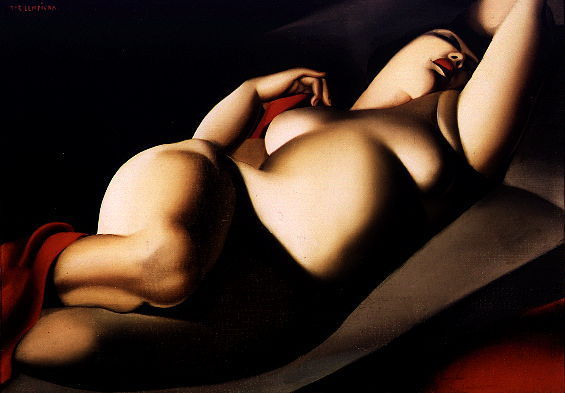 Tamara de Lempicka's La Belle Rafaela, painted in 1927, inspired Ellis Avery's novel The Last Nude. The art deco painter met Rafaela while on a walk in a Paris park. Rafaela became her model and her lover.

You've probably seen the paintings — women, often nude, always glamorous, the epitome of Jazz Age elegance in Paris in the 1920s, done with a particular cubist, finished fashion. The art deco painter is Tamara de Lempicka, and she's the subject of a new novel by Ellis Avery.

The Last Nude imagines a hidden affair behind one of de Lempicka's most critically acclaimed works. The novel explores the relationship between the painter and Rafaela, the model featured in several of de Lempicka's works from 1920s Paris.

It was de Lempicka's 1927 work, La Belle Rafaela, that started Avery on her journey. "It's ravishing," Avery tells NPR's Jacki Lyden. "It's luminous. It's brilliant. It's in landscape rather than portrait. It's this beautiful, luscious, big woman who's on her side, she's nude, she's draped in red, she has her arm behind her head, and she looks ecstatic." 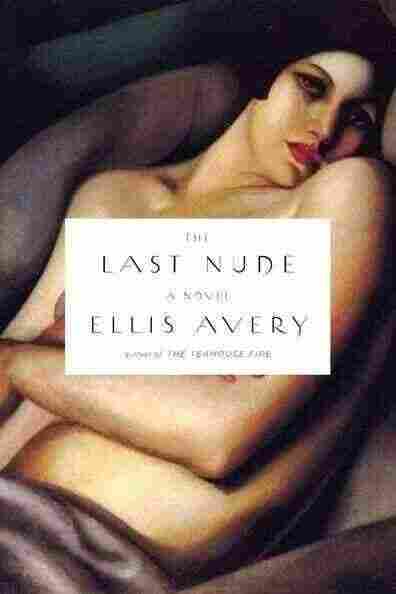 On the story behind La Belle Rafaela:

"The artist met the model on a walk in a public park in Paris in 1927, [and] took her back to the studio. This girl became her model and her lover, and they produced six paintings together over the months that followed.

"... What was incredibly moving was ... the very last painting she was working on when she died in 1980 was a copy of this same 1927 beautiful Rafaela. So 53 years later, this girl was on her mind."

On the kind of character Avery wanted Rafaela to be in the novel:

"I wanted her to be earthy, matter of fact, relatively comfortable with her sexuality, although this experience with Tamara is completely new to her. She was meant to be in an arranged marriage with someone back in the old country, back in Sicily, and she really didn't like the idea. She had seen a Chanel dress back in the Bronx, and she thought that was the most gorgeous thing she ever saw in her life, and when she hears that it's from Paris, that's the place she's got to go. So she has this tough side, but then she's also very, very young. She's 17 years old, and when she falls for Tamara, she falls like she's never fallen before."

On the relative openness about same-sex relationships in 1920s Paris:

"[In] the 1920s, because of the war, there was this feeling of liberation and nihilism at the same time, where people felt like all of the rules that kept us down before turned out to have been in vain ... and I think that they felt license to do things that they had — prior to that — felt obliged to hide or not do." 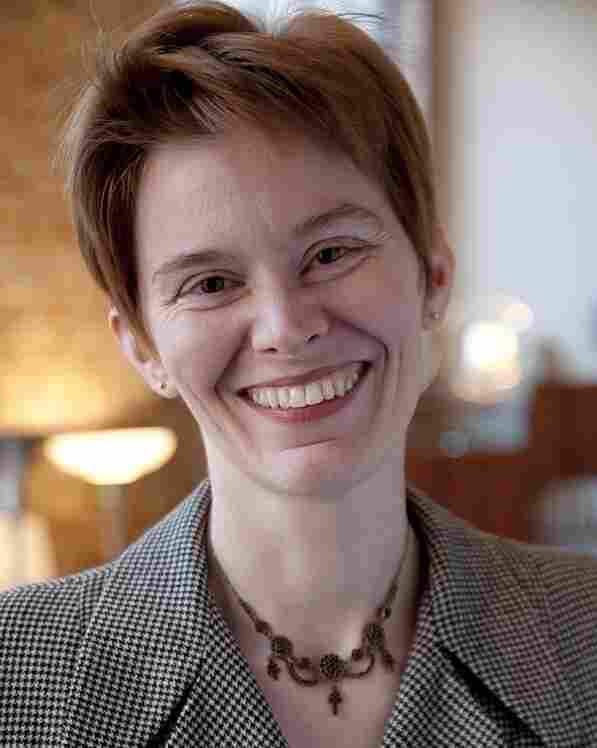 Ellis Avery is a creative writing professor at Columbia University, and the author of The Teahouse Fire and The Smoke Week: September 11-21, 2001. Matthew Powell/Riverhead Books hide caption 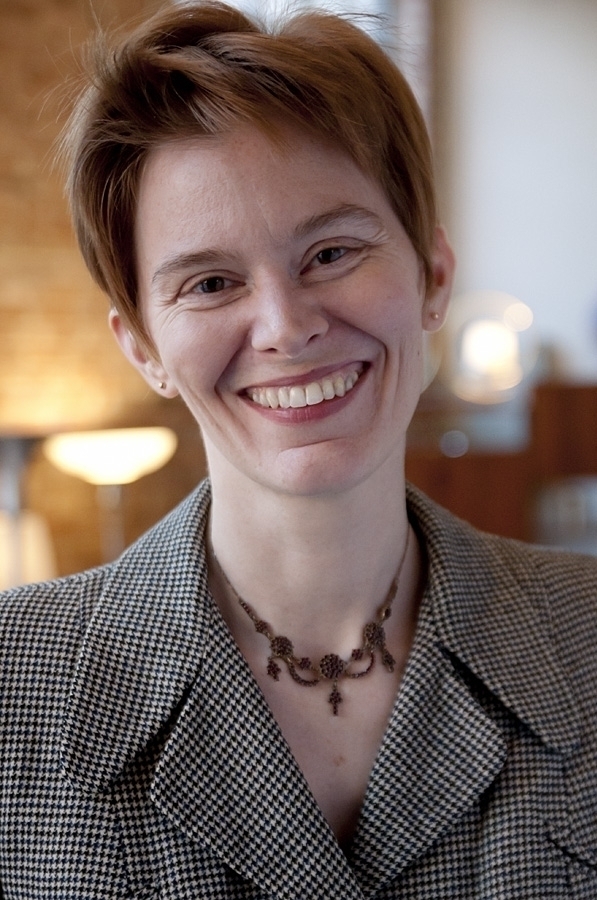 Ellis Avery is a creative writing professor at Columbia University, and the author of The Teahouse Fire and The Smoke Week: September 11-21, 2001.

On why, after having written most of the novel from Rafaela's point of view, she brings Tamara's voice in at the end:

"I wrote the entire novel from Rafaela's point of view, and then I was completely taken by surprise by this voice in my head that was louder, stranger, more demanding, more ruthless than Rafaela's voice — it was Tamara's voice. And I had to try writing in it, and it just came out like a roar. Like an aria. And I was excited and scared, and I just let her speak, and ... having done so, realized that something Rafaela took 120 pages to say, Tamara could say in two lines. And that meant that I wound up cutting the book by a full quarter."

"Not only did I get to see the paintings that inspired my novel back in 2004, just last month in November I got to go to Sotheby's ... [to see] the painting that's the cover of my book, The Dream, where Rafaela is facing the viewer directly. She's got a gray and green background behind her. She looks trusting and sexy, and she's looking you right in the eye.

"I got to stand in front of it, and it was like basking in front of a hearth, it was so alive and vivid. I got to stand up so close that I could see the surface of the painting was lumpy and bumpy and full of impasto that really disappears when you stand 10 feet away. It looks like it's been created in the cool-headed, super-perfectly finished state of focus, but then when you're up close, you realize this painting was made in a state of passion."

Read an excerpt of The Last Nude