Accessibility links
This Year In Congress: Much Drama, Little To Show There were at least three countdowns to shutdown, there was the debt-limit fight, plus the will-they-or-won't-they drama over the payroll tax holiday. Looking at how few bills were actually signed into law this year, one might conclude this session was mostly sizzle and not much steak. 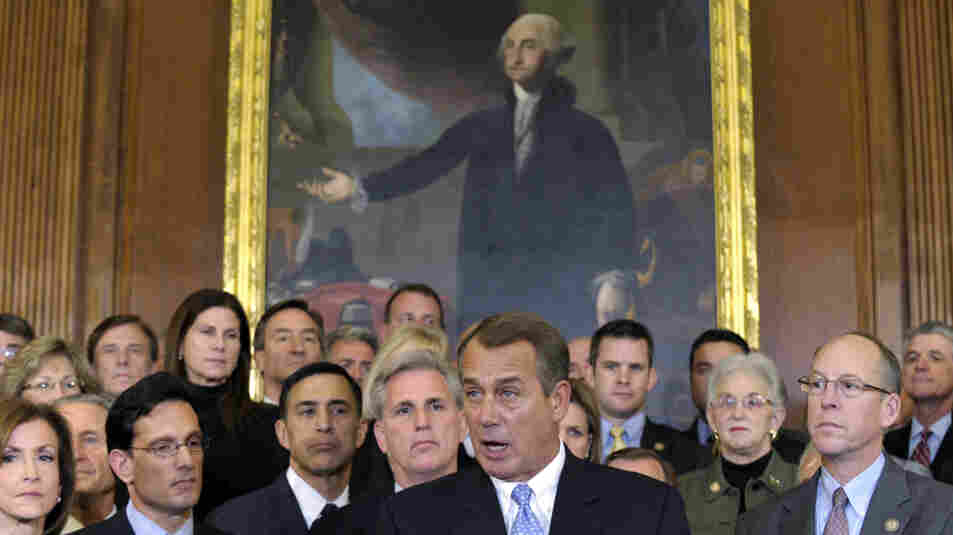 House Speaker John Boehner, surrounded by Republican House members, speaks during a news conference in Washington in December. The House initially rejected a plan to extend a tax cut for two months to buy time for talks on a full-year renewal. It later compromised — a rare event in 2011. Susan Walsh/AP hide caption

Congress got plenty of attention this year, but it was for all the wrong reasons.

There were at least three countdowns to shutdown, there was the debt-limit fight, plus the will-they-or-won't-they drama earlier in December over the payroll tax holiday. Looking at how few bills were actually signed into law this year, one might conclude this session was mostly sizzle and not much steak.

"I mean, I knew it was going to be bad this year, but I didn't realize like how bad it was," says Tobin Grant, an associate professor of political science at Southern Illinois University.

Grant developed an index to measure Congress' productivity. After looking at the numbers, he says this Congress is on pace to be the least productive since the '80s — not the 1980s, but the 1880s.

Grant says he'd consider very few of the 80 bills signed into law so far this session to be major legislation.

Multiple bills continue funding that had already been ongoing. Others, he says, include "taking a bold stance in favor of 9/11 heroes and autism" with the Combating Autism Reauthorization Act and the Fallen Heroes of 9/11 Act. Congress also passed 10 resolutions naming post offices.

Now, this is the first of a two-year Congress, and the first year is always less productive. This one, though, has been especially unproductive.

In 2011, Congress did pass the Deficit Reduction Act, three free-trade bills and a patent-reform measure. However, much of its time was spent racing against those countdown clocks, passing short-term extensions to keep the government open for business and fighting right up to the brink over matters that in the past have been routine.

"When you're dealing at this level with issues that are so polarizing, they will basically suck all the oxygen out of both chambers," says Ross Baker, a professor of political science at Rutgers.

A spokeswoman for House Majority Leader Eric Cantor says having so few bills signed into law isn't a problem: "Good governance is not measured by the tally of bills passed or the expansion of the federal government, but by the quality of the legislation," she said.

Meanwhile, the House has complained all year that the Democrat-controlled Senate won't take up the bills it does pass.

Thomas Mann, a senior fellow at the Brookings Institution, says there's something more at play here when it comes to House Republicans.

"They will brook no compromise to their principles," he says.

Mann prides himself on being a nonpartisan analyst, but he says this year blame for congressional dysfunction isn't equally divided between the two parties. The Republican Party, he says, "has become just adamant about taking hostages and making nonnegotiable demands."

"Everything in the legislative process is part of a permanent campaign. It's no longer just a tussle. It's an all-out war," Mann says.

This year wasn't even an election year, which means people may want to temper their expectations for congressional productivity in 2012.