Accessibility links
After A Year of Struggles, Obama Finds His Footing This has been a year filled with drama and delay between President Obama and Congress, but he's ending it on a high note. 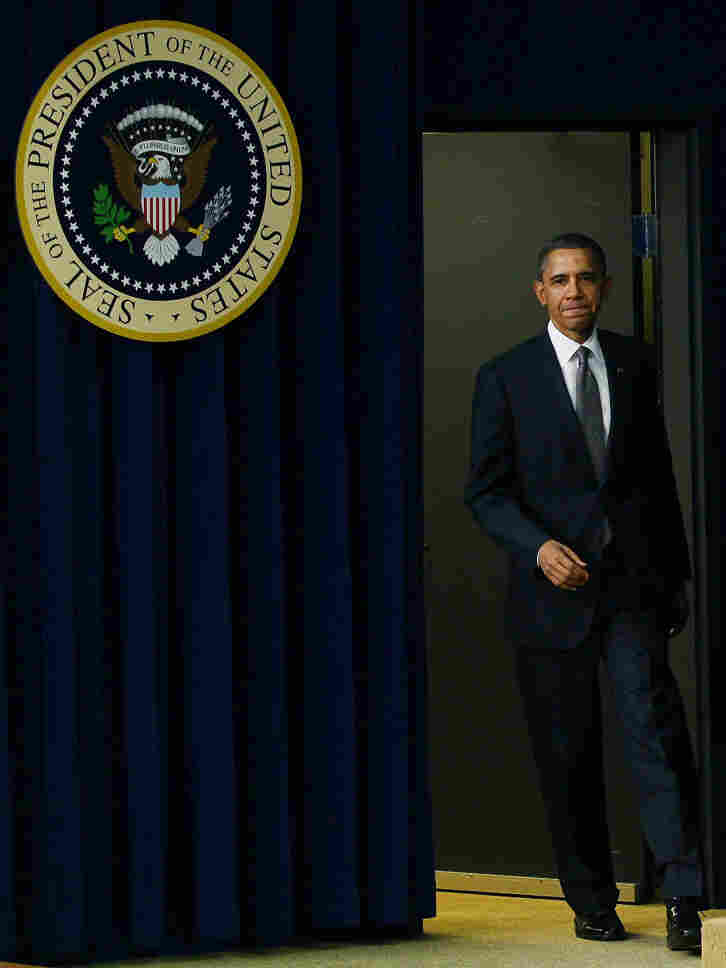 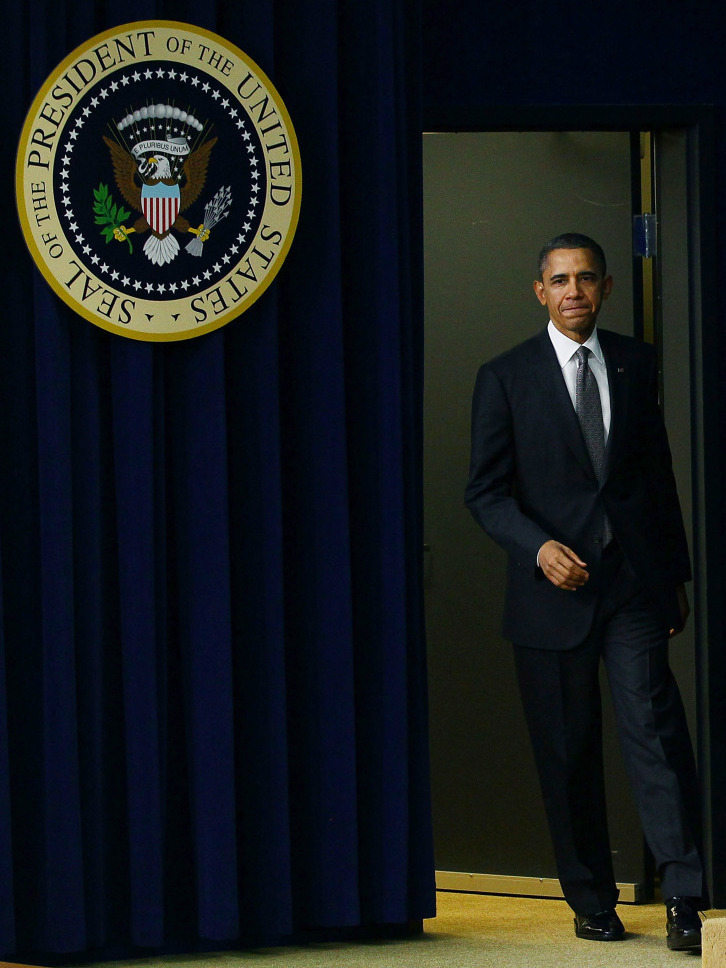 President Obama walks onstage Dec. 22 to urge members of Congress to vote on a short-term compromise that extended the payroll tax cut.

Even as President Obama relaxes with his family in Hawaii over the holidays, he knows what's on the horizon when he returns to work in Washington.

He will start where he left off, facing new skirmishes with Congress over a push to extend a temporary cut in payroll taxes. That temporary extension was approved just days before Christmas after a high-stakes gamble that finished only after most of Congress had left for the year.

"When Congress returns, I urge them to keep working without drama, without delay, to reach an agreement that extends this tax cut, as well as unemployment insurance, through all of 2012," President Obama told reporters at the White House last week before leaving to meet his family for vacation.

For the president, 2011 was a year of missed opportunities and bad bargains. But as the year ends, Obama seems to have found his footing.

Early in the year, he looked past a 9 percent unemployment rate and joined Republicans in preaching the gospel of fiscal austerity.

"We have to live within our means. We have to reduce our deficit. And we have to get back on a path that will allow us to pay down our debt," the president said in an April speech on fiscal policy.

Tough talk was the order of the day, but for months, the president sat on the recommendations of his own deficit-cutting commission, waiting for the newly empowered House Republicans to make their move.

When Rep. Paul Ryan, a Wisconsin Republican, drafted a budget calling for deep cuts in spending and taxes, Obama counterpunched, saying Ryan's plan would shortchange investment and end Medicare as we know it.

"And worst of all, this is a vision that says even though Americans can't afford to invest in education at current levels or clean energy, even though we can't afford to maintain our commitment on Medicare and Medicaid, we can somehow afford more than a trillion dollars in new tax breaks for the wealthy," Obama said.

Hopes For A 'Grand Bargain' End With A Summer Standoff

The president offered his own plan in response, and several tense rounds of negotiation with congressional leaders followed.

Obama pursued a so-called grand bargain, with cuts to Medicare and higher taxes on the rich.

But those talks didn't go anywhere. The president complained that Republican House Speaker John Boehner — uncertain of his own troops — twice walked away. 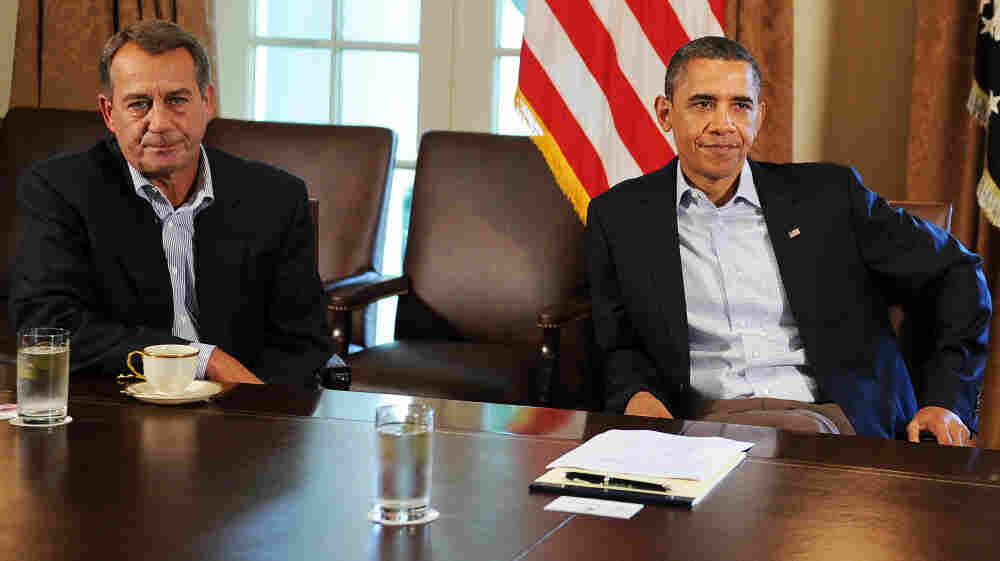 House Speaker John Boehner, R-Ohio, and President Obama at the White House on a Saturday in July, a day after Obama told reporters he had been "left at the altar" by Boehner. Jewel Samad/AFP/Getty Images hide caption 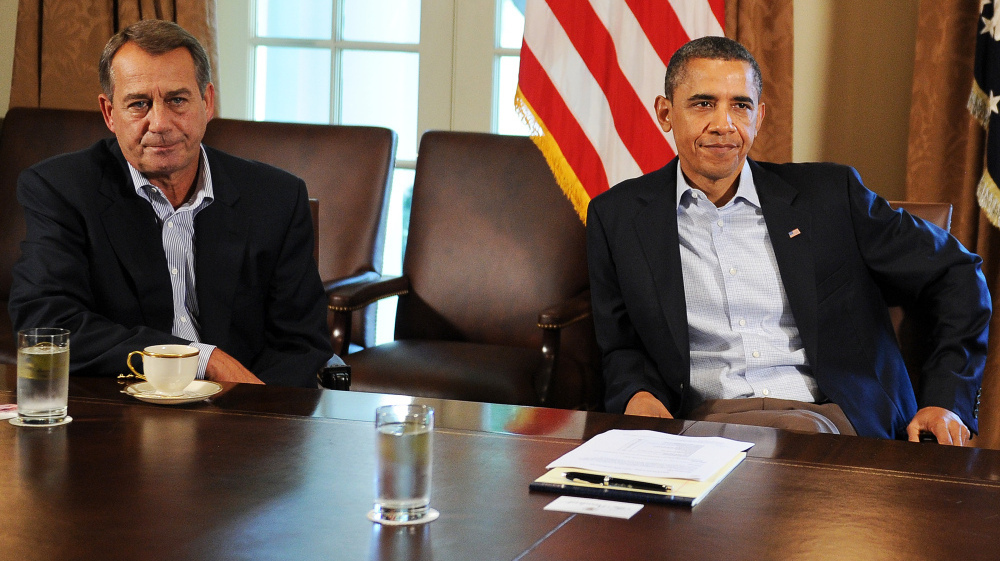 House Speaker John Boehner, R-Ohio, and President Obama at the White House on a Saturday in July, a day after Obama told reporters he had been "left at the altar" by Boehner.

"I've been left at the altar now a couple of times. And I think one of the questions the Republican Party is going to have to ask itself is, can they say yes to anything," the president said late on a Friday afternoon in July.

Norman Ornstein of the conservative American Enterprise Institute could only shake his head at the deal Republicans had passed up.

"We're not seeing rational actors behaving in a rational fashion in a time of divided government. And there's a level of dysfunction, frankly, that I haven't seen in 41 years in Washington," Ornstein said.

Lawmakers eventually agreed to a smaller deficit-cutting deal, and a clumsy arrangement to raise the government's debt ceiling. No one was happy with the bargain, or the process.

"It seems especially in the last year as if your negotiating tactics have cut away at that trust by compromising some key principles that we believed in. ... Even Social Security and Medicare seemed on the line when we were dealing with the debt ceiling," said Neal.

In response, President Obama insisted the debt ceiling was a special case and that he had to bend over backward to avoid financial disaster.

A Final Push for Political Leverage

Democratic pollster Geoff Garin says that once the debt ceiling was raised beyond next year's election, Republicans lost much of their leverage, and the president could afford to take a harder line.

"It frees the president to be more clear in terms of framing the choice with the Republicans, even when the Republicans don't like that he's doing that. And clearly they don't," said Garin.

This fall, Obama shifted focus from debt reduction to job creation, with a new set of proposals that he practically dared Republicans to vote against.

"If they've got an alternative vision, and they want to sit there and do nothing for the next 16 months, while unemployment is still high and small businesses are still suffering, then ultimately they're going to be held to account by you," said Obama during his Iowa bus tour this summer.

The House Republicans seem to have snatched defeat from the jaws of victory.

Congress approved almost none of the president's jobs package, save a tax break for hiring veterans and a grudging two-month extension of the payroll tax cut. Even that required a concession from Obama, on a controversial oil pipeline.

As Pitney puts it, "The House Republicans seem to have snatched defeat from the jaws of victory."

House Republicans had played right into the president's storyline about a do-nothing Congress. And when they later relented, Obama's victory seemed that much bigger.

Little wonder many Democrats want him to continue this tactic in 2012 — treating Congress not as a partner but as a foil.