Accessibility links
The Changing Face Of America's Chinatowns For centuries, people from China have immigrated to major cities in the United States. There, many formed their own neighborhoods known today as Chinatowns. But with China's economy booming and the U.S. economy faltering, these historic neighborhoods are seeing declining populations and new demographics. 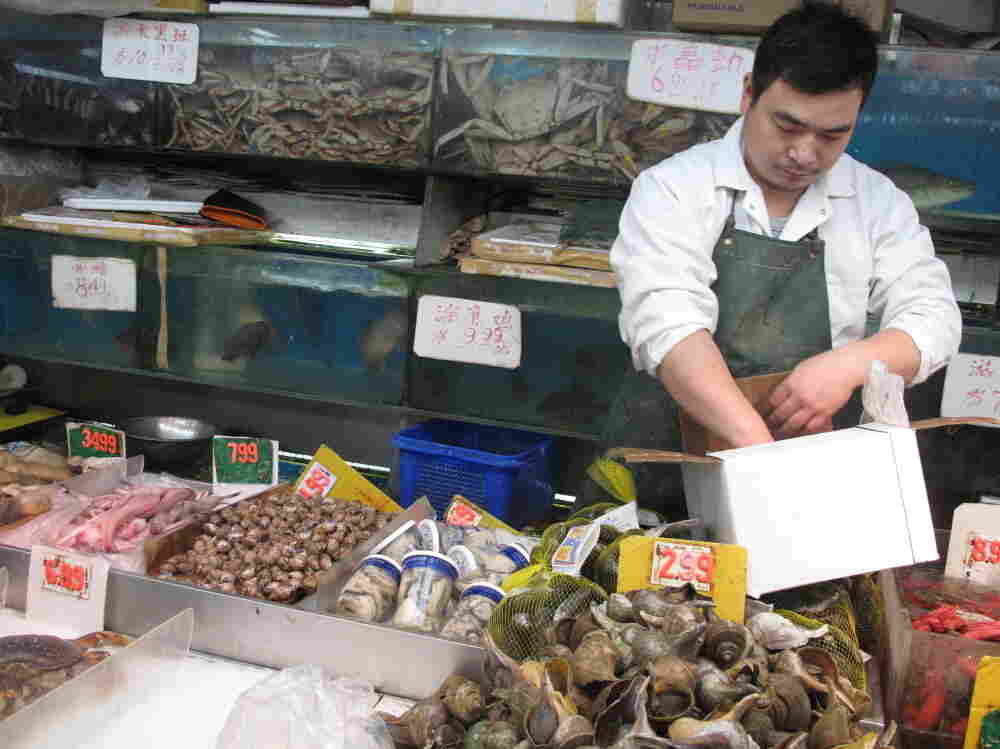 The Chinese New Year begins on Jan. 23. On that day, people will celebrate the Year of the Dragon in Chinatowns across the country. 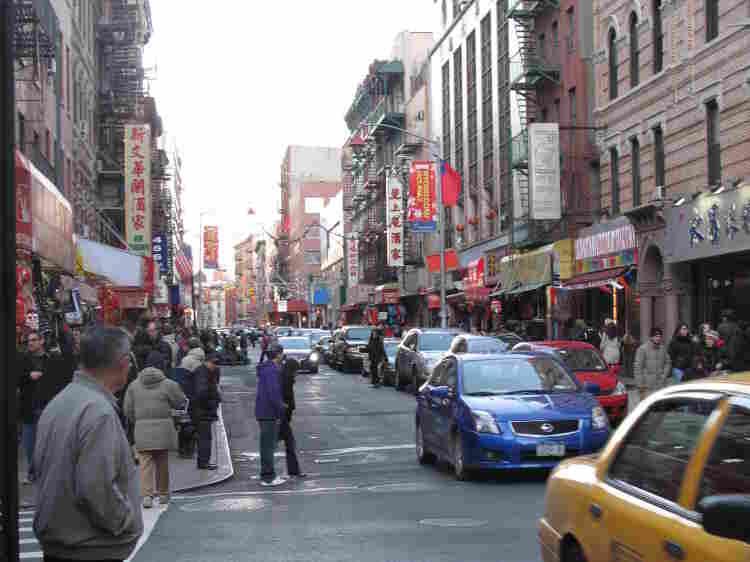 One former resident of New York City's Chinatown says just about everything there costs too much nowadays. Rebecca Sheir/NPR hide caption

The neighborhoods known as Chinatowns sprang up in the U.S. during the Gold Rush. But since then, they've seen gradual yet significant changes — not so noticeable to the average visitor, perhaps, but quite drastic to those who've called these communities home.

To find out more, weekends on All Things Considered guest host Rebecca Sheir visited the nation's biggest Chinatown, in New York City. We began on the unofficial main street, Mott Street: a narrow but bustling thoroughfare lined with souvenir shops, teahouses and restaurants, and packed to the gills with people.

Bonnie Tsui, the author of American Chinatown: A People's History of Five Neighborhoods, served as our guide. She got to know Manhattan's Chinatown at a very early age.

"I was baptized here [at the Church of the Transfiguration], and all the members of my family were," Tsui tells Sheir. "The adjacent street is the funeral row, so it all begins and ends here for a lot of Chinese Americans."

The church used to offer services solely in Cantonese, the dialect that dominated North America's Chinatowns for decades. But these days, the church presents services in Mandarin, too — which Tsui says reflects Chinatown's current population.

In addition to Mandarin and Cantonese, she says, visitors may hear Toisanese, a subdialect of the Canton province, and even Fujianese.

Another big change, she says, is with industry. Traditionally, Chinatown's twin trades were clothing and food.

"Of course, the garment industry is sort of dying off a little bit now, but for a long time it basically employed all of the women in Chinatown," Tsui says. Her grandmother worked as a seamstress, and her grandfather worked in a fortune cookie factory where he hand-folded the cookies.

The garment industry may have shrunk, but the food business is going strong — from groceries and markets to restaurants. But not all of Chinatown's food establishments are Chinese.

Tsui points out a Mexican restaurant that bears the sign of a now-gone Vietnamese eatery, explaining that you can think of Chinatown as a "revolving door."

"One thing to note about Chinatown is that it welcomed Chinese immigrants in its history and all the Chinatowns across the country. For example, the one in Los Angeles became a welcoming spot for Southeast Asian immigrants, Vietnamese, Cambodian, Thai."

On any given day, people gather in Columbus Park to play board games and listen to live music. Tsui calls the park Chinatown's "living room."

"You know, a lot of the apartments are so small that people come outside and hang out, and it's wonderful to see life go by," she says.

A woman named Kitty has been coming to the park for decades. She moved to Chinatown from Canton province in 1969, and says the biggest change she's seen in the neighborhood is that "the food no good." 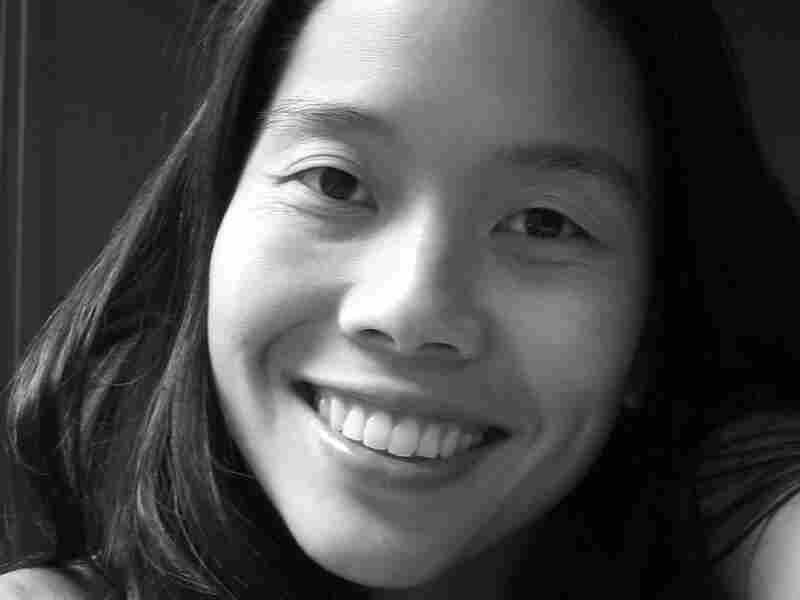 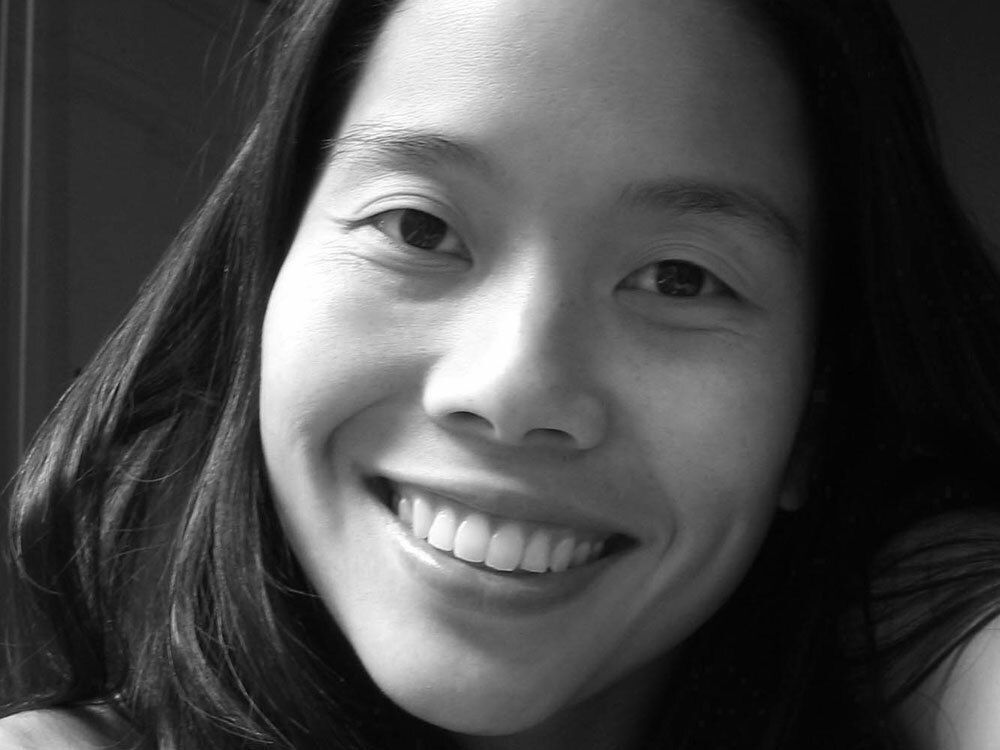 But not just the quality of the food — the price, too. Kitty says just about everything costs too much nowadays.

Which is why Kitty eventually left Manhattan's Chinatown for the less pricey Flushing, Queens, what Tsui calls a "satellite Chinatown."

But while this relocation might benefit the people departing, Tsui says it's not so great for the urban center they're leaving behind. Washington, D.C.'s Chinatown has been fading for years. San Francisco's is seeing increasing outward migration. And as for New York's, Tsui goes so far as to say it's "fighting for its life."

"When the working class starts moving out of a neighborhood, it loses that vitality," Tsui says. "And there are different pressures not just of rising rents, but also the relationship between Chinatown and China is changing."

This relationship has to do with the economies of the U.S. and China. The International Monetary Fund predicts China's economy will be bigger than America's by 2016. And that means more work and higher wages for people back home.

This has led to migration back to China as even more well-off people who come to America for an education also head back. There's even a term for them: "sea turtles."

They have been lured back to China by the Chinese government with cash bonuses, financial aid, tax breaks and housing assistance.

"Before it would have been a no-brainer that they would have stayed in the U.S., and you know now it is just not a given, there's competition," Tsui says.

There was a 17 percent drop in the population of New York City's Chinatown over the past decade, and Tsui says this may point to Chinatown becoming more of a "cultural and symbolic touchstone" as it has for many Chinese Americans.

"Maybe it becomes less of a functional, living, working, daily life kind of place that at least like New York City's Chinatown has always been," Tsui says. "What is the future of Chinatown? We don't know, but these are important things to look at as we move forward."