Accessibility links
2011: An Extraordinary Year For Gay Rights Among the highlights: the passage of New York's Marriage Equality Act; and the end of "don't ask, don't tell." We take a look back with Dan Savage and interview the first same-sex couple to get married in New York. 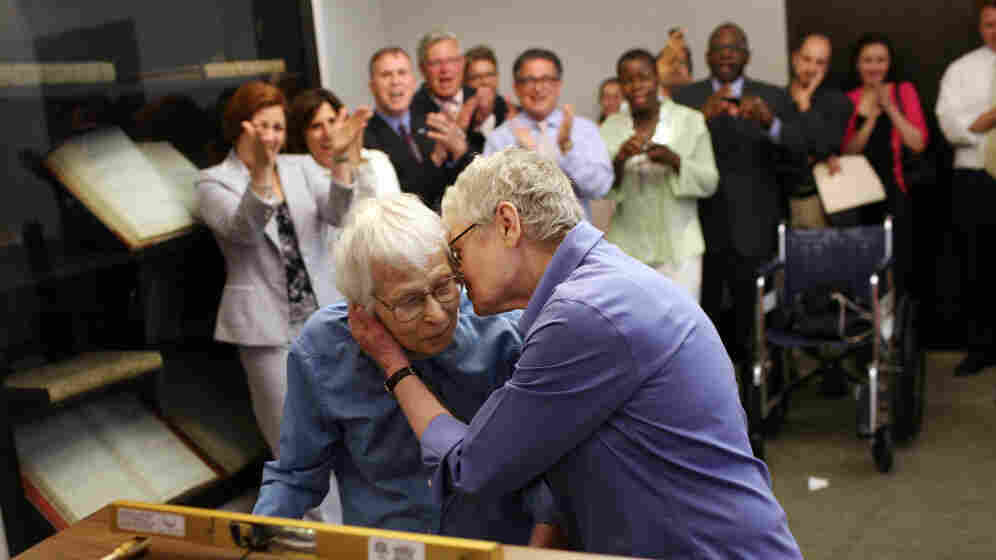 This year was an extraordinary one for many things — especially gay rights. In September, the end of the military's "don't ask, don't tell" policy allowed gay, lesbian and bisexual people to serve openly. And just this month, two female sailors became the first to share the Navy tradition of a "first kiss."

This summer, New York became the sixth and largest state yet — along with Washington, D.C. — to allow same-sex marriage. Phyllis Siegel, 76, and her partner of 23 years, 84-year-old Connie Kopelov, became the first same-sex couple in New York City to be legally married.

Siegel tells weekends on All Things Considered guest host Rebecca Sheir that saying "I do" was different from hearing it.

Increasingly, people are seeing LGBT people as not these sort of existential, scary, bogy-monster threats to the institution of marriage, but people who have a right to equal treatment under the law.

"I've heard those words before — [from] relatives, friends — but they never meant as much to me as that day," Siegel says. "What I did was feel a swelling inside of me. As corny as that sounds, that's what I felt."

It was Sunday, July 24, and each women wore white pants and a blue shirt — blue being the color of fidelity. Siegel says marriage has created a special bond.

"We call each other 'wife' and just laugh because it's so nice," Siegel says. But, she adds, they're like any other couple.

"We have our little spats, and then we make up, we tease each other," Siegel says. "It's just great. It's on a different level, I can tell you that. I can't define it anymore than that."

She says the biggest thing she was thinking at the moment she and Connie kissed for the first time as a married couple was how much she loved Connie.

"I didn't plan the kiss on the cheek and lightly on the lips," Siegel tells Sheir. "I didn't want to make a big deal out of it, but I wanted it to mean something ... Talking to you is making me feel it again, and I'm becoming a little breathless."

'A Good Year To Be Queer'

Among those applauding the recent strides in gay rights is columnist and activist Dan Savage, who told Sheir that it was a "good year to be queer." Last year, he and his husband, Terry Miller, started the It Gets Better Project, a series of YouTube videos designed to help prevent suicide among LGBT youth. This year, the pair co-edited a book inspired by the videos.

Savage says it was a "very consequential year" with the end of "don't ask, don't tell"; passage of the New York Marriage Equality Act; and Hillary Clinton's speech last month to the United Nations on LGBT rights.

"[Clinton] stood up for half an hour and lectured world leaders on the fact that gay rights are human rights," Savage says. "LGBT people in America were just staggered when she began the speech and was talking about LGBT rights all over the world and didn't stop."

Savage says the passage of the New York Marriage Equality Act signified a change in people's attitudes toward the LGBT community.

"Increasingly, people are seeing LGBT people as not these sort of existential, scary, bogy-monster threats to the institution of marriage, but people who have a right to equal treatment under the law," Savage says.

As for the adjustment process for soldiers who have come out since the repeal of "don't ask, don't tell," Savage says it's a non-issue.

"The head of the Marines, who was the most vocal and high-profile opponent of repealing DADT, has admitted now that he was wrong," he says.

Two women sailors became the first to share the coveted "first kiss" on the dock after one of them returned from 80 days at sea.

Savage describes how the DADT repeal even got its iconic image in mid-December, when a lesbian sailor won the right to be the first off her ship after 80 days at sea to kiss a loved one, who was also a lesbian sailor.

Savage says that a couple of years ago, he was at a park in Seattle when a limo pulled up and a wedding party got out. The bride and groom had their portrait taken, and everyone began to applaud. He was standing next to a gay couple he didn't know, and one of the men asked Savage, "We're always happy for them, would it kill them to be happy for us?"

Savage says that because there was no public ceremony attached to same-sex relationships, straight people who were supportive didn't have a chance to express it.

"Increasingly, straight people are demonstrating their support in ways that really touch my heart and terrify Tony Perkins [of the Family Research Council]."

The biggest issue in 2012, he says, will be the presidential election. While President Obama "isn't perfect," Savage says, there may be "an evolutionary leap" after the 2012 election.