Accessibility links
Japanese Smoking Culture Proves Hard To Snuff Out Japan has long been a friendly place for smokers. Despite tens of billions of dollars in cigarette-related health costs and damages, anti-smoking initiatives have always had trouble gaining traction. 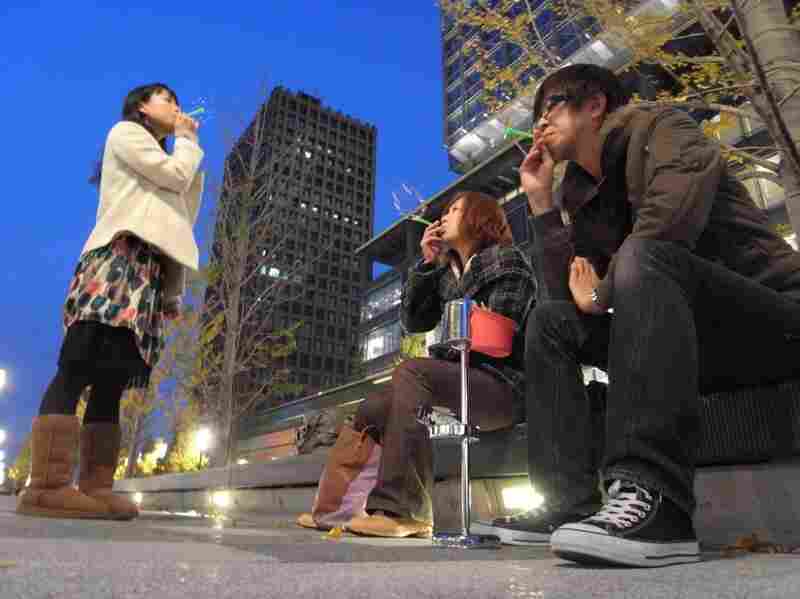 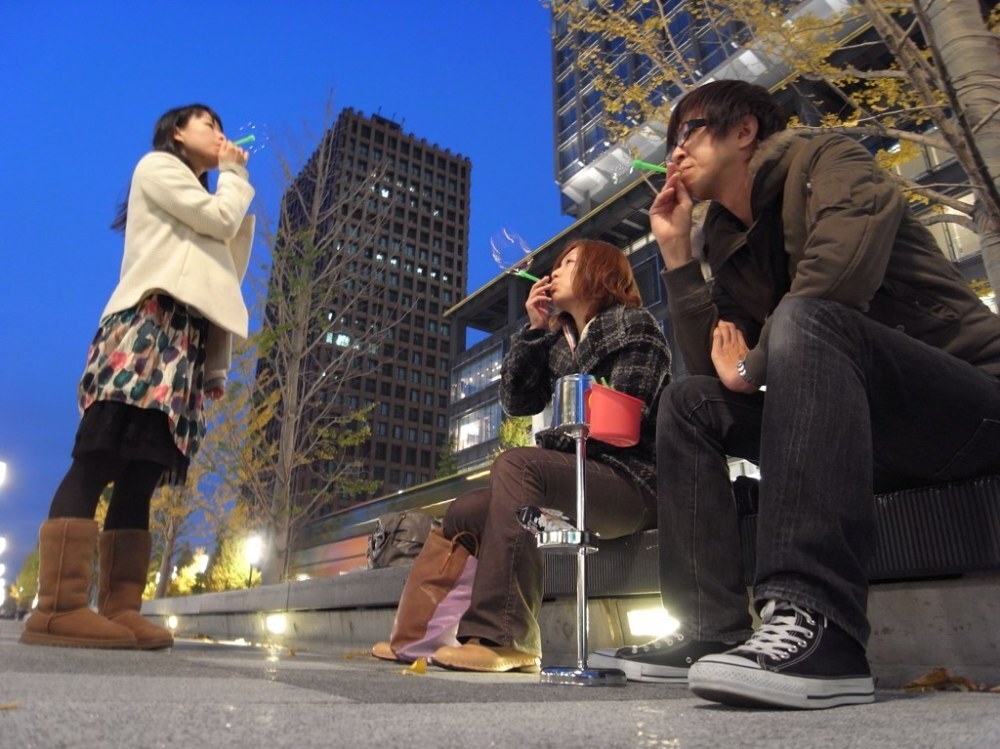 Mina Abe (center) and Kota Osabe (right) are trying to promote blowing bubbles as an alternative to cigarette smoking in Japan.

For generations of Japanese, smoking has been all but synonymous with manhood and hard work. During Japan's high-growth period in the 1960s, the smoking rate for males topped 80 percent, twice as high as the rate during America's smoking heyday.

In a country that's so tobacco friendly, it's no wonder anti-smoking initiatives have trouble gaining traction. That's despite the estimated $90 billion being spent on cigarette-related health costs and damages every year, three times what cigarette sales bring in annually, according to the Japan Health Economics Association.

Anti-smoking activist Bungaku Watanabe says Japan has been dragging its feet on the kind of smoking regulations that are now common in other advanced countries.

"It's not that Japanese love smoking so much," he says, "it's that tobacco has been a pillar of Japanese national policy."

It's no accident that the national headquarters of Japan Tobacco, the world's third-largest tobacco company, is located near the seat of government in Tokyo.

Japan Tobacco is a majority government-owned company and Japan's tobacco lobby has used that proximity to successfully fend off several anti-smoking initiatives.

So while only about a quarter of American men smoke, the rate for Japanese males remains stuck at about one-third. Activists say most Japanese smokers want to quit, and would if prices were in line with other first-world countries.

But with lung cancer rates spiking, there finally seem to be changes afoot. On the main streets of Tokyo, where pedestrians once slung their lit cigarettes with abandon, smokers have now been banished to segregated areas of buildings and train stations.

Bubbles Instead of Ashes

It's not that Japanese love smoking so much, it's that tobacco has been a pillar of Japanese national policy.

And then there's the quirky alternative that Mina Abe, an executive assistant in her 20s, and Kota Osabe, a 30-something I.T. engineer, are promoting. They stand in what was once the smoking area of a Tokyo restaurant wielding green plastic pipes that they hold like cigarettes. The pair contentedly fills the air not with smoke, but with bubbles.

"This used to be an ashtray and we filled it with soap that we can blow bubbles with," Abe says.

"Everyone thinks we're crazy," Kota adds. "When I demonstrated this for a TV show, people stared and one guy tried to drop ashes in my bubbles."

Abe and Kota say they weren't looking for a way to wean smokers off their addiction. They were just looking for an alternative to a social ritual so deeply ingrained in Japanese culture that it's hard to imagine society functioning well without it.

"You have to be in that community of smoking people to be able to reach out to important people," Abe says. "It's really a tool to get to the people you want to talk to. So you don't really want to smoke, but you feel like you have to be smoking in order to be a member of that kind of community."

Restaurant owner Hima Furuta agrees that without their nicotine props, shy Japanese often have a hard time breaking the ice.

"The smoking area is a kind of a communication space for the Japanese people because usually they can't communicate with different types of people," Furuta says, "especially the higher class of the company."

It's not exactly a movement yet, but Abe and Kota are taking their quiet bubble crusade to shopping centers, festivals and eateries in hopes of showing this stubbornly tobacco-friendly nation an alternative to one of their preferred social pastimes.