Accessibility links
How A Teen's Coerced Confession Set Her Free In 2008, 16-year-old Nga Truong admitted to suffocating her infant son. She spent nearly three years awaiting trial for murder, until a videotape of her interrogation revealed that detectives had manipulated her in order to obtain a confession. Ultimately, that videotape helped set her free. 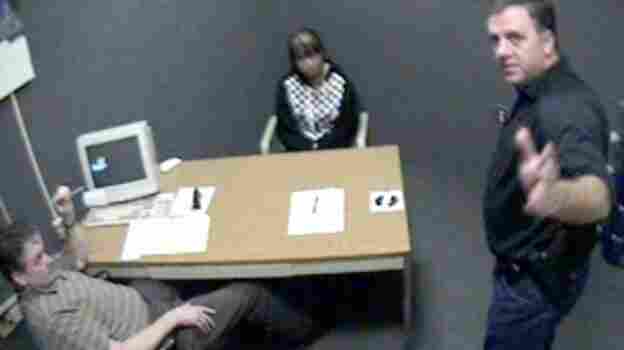 A screen shot of video footage attained by WBUR shows Worcester Police Sgt. Kevin Pageau (right) and Detective John Doherty as they interrogate Nga Truong, then 16, after the 2008 death of her baby boy. WBUR hide caption 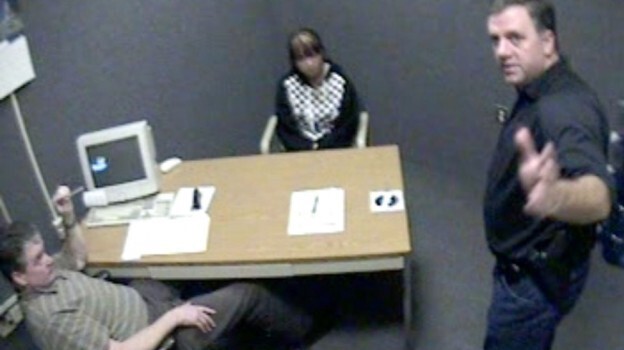 A screen shot of video footage attained by WBUR shows Worcester Police Sgt. Kevin Pageau (right) and Detective John Doherty as they interrogate Nga Truong, then 16, after the 2008 death of her baby boy.

It's Dec. 1, 2008, a couple of days before Nga Truong's 17th birthday. Truong is in "the box," a tiny interrogation room at the Worcester, Mass., police department.

The day before, Worcester 911 had received a hysterical call for help from the apartment where the Vietnamese-American teenager lived with her 13-month-old son, Khyle; her boyfriend; her mother; and her younger brothers. Khyle wasn't breathing, and an hour and a half later, a doctor at a nearby hospital pronounced him dead.

Back in the interrogation room, Sgt. Kevin Pageau presses in on the sobbing teenager.

"Somebody hurt that baby, and we need to know who it was, and we're going to find out who it was," Pageau says.

"I'm telling you everything," Truong replies.

In that room, Truong will admit to suffocating her son. She'll be arrested and she'll spend almost three years awaiting trial for murder. But a videotape that police made of that interrogation, which NPR member station WBUR fought in court to obtain, will eventually set her free. 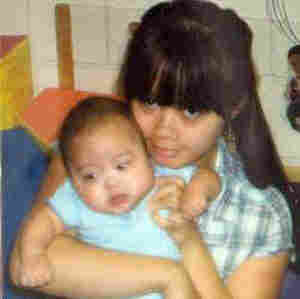 Before his death in 2008, Nga Truong's son, Khyle, suffered from respiratory problems that required a nebulizer. via Facebook hide caption 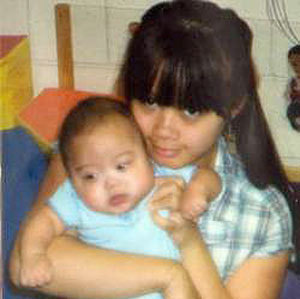 Before his death in 2008, Nga Truong's son, Khyle, suffered from respiratory problems that required a nebulizer.

That videotape provides a rare look into the interrogation room, and the potential power it gives detectives to coerce false confessions.

'The Worst Luck In The World'

Much of the recording shows Pageau and Detective John Doherty sitting across the table from a distraught Truong. The room is gray, and Truong wears a black and white sweatshirt.

"That baby was smothered. Somebody smothered him," Pageau says. "You have some bad luck watching kids."

That "bad luck" refers to the death, years ago, of Truong's 3-month-old brother, Hein. Truong's mother left her alone with the infant when she was only 8 years old. When Hein suddenly became unconscious, Truong brought him to a neighbor who called 911. But it was too late.

After an investigation and an autopsy, the medical examiner determined that Hein had died of sudden infant death syndrome. But when the two detectives learn of Hein's death, they quickly decide that Truong had killed her brother and now she's killed her baby, too.

Lies In The Interrogation Room

Homicide detectives are often required to confront the people they question. But in the case of a teenage girl whose baby has been dead for 27 hours and who pleads and cries through much of the interview, Truong's attorney, Ed Ryan, says this is psychological torture.

"Their interrogation was designed not to determine the truth, not to get at the facts," says Ryan, who wasn't present for the interrogation, when Truong didn't yet have a lawyer. "Their intention was designed to force her to confess to doing it in the way they figure she did it. They are the ones that force-fed her the word 'suffocation.' "

According to conventional training manuals, the purpose of interrogation is to get the suspect to incriminate themselves or, better yet, make a full confession. Confessions are considered the queen of criminal evidence, so in that room, Pageau does what he can to get the evidence he's looking for.

The detective knows, as he will later acknowledge in court, that the medical examiner who conducted the autopsy a few hours earlier has not yet discovered a cause of death. But in the box, he betrays no doubt.

"I know how he died, which is why we are here," Pageau tells Truong.

In fact, at this point, Pageau does not know how Khyle died. William Powers, a former Massachusetts State Police detective who has interviewed thousands of suspects and trained countless detectives, watched the videotape. He says that in Massachusetts, courts and judges take a particularly dim view of false statements by detectives.

According to Powers, "While they have never said flat out, 'You cannot lie,' it's a real negative factor with the courts."

The Worcester detectives continually lie to Truong while at the same time accusing her of lying to them every time she says she didn't kill her baby.

"Maximization" is a technique detectives use to convey to the suspect the hopelessness of their situation. It's meant to give the impression that continued denials will fail and that confession is an easier way out. And that's just what Pageau does when he tells Truong, "If you think this is going to be like that other baby you were watching so well, you're sadly mistaken."

Eventually, the detectives switch from "maximization" to "minimization." Pageau's partner, John Doherty, offers Truong sympathy and plays down her responsibility for what they accuse her of doing. After all, Doherty tells her, "you're just a kid."

"People will be much more understanding if you come forward and say, 'I'm a 16-year-old girl. I lost it, this is what happened,' " Doherty says.

The detectives exploit the antagonism between Truong and her mother, who is only 14 years older than Truong. They say the house is a mess and that Truong's mother is unfit. While offering Truong an excuse, they dangle a motive for why she did what they accuse her of doing.

He continues, "We know you're pissed because you have to keep taking care of your mother's kids, and you didn't have a chance to be a kid. That's why you smothered Khyle, didn't you?"

"I did not," Truong replies.

"That's why you smothered him, didn't you?"

"I would never kill him."

That's when the detectives turn to another method of extracting a confession: making promises and offering inducements. They say they can get Truong help if she confesses.

"All everyone's waiting for today is for you to admit to what you did so that we can start the process of getting you some help," Pageau says, "getting your brothers out of that house and getting them in a better home, where there's a mom that gets up in the morning and takes care of them."

Bill Powers, who trains detectives through Boston University, says that's where the Worcester cops cross a big, bright line of the law.

"We can't make promises. We can't say we will do things that we can't do," Powers says. "To say she will be tried as a juvenile versus as an adult, that's not our call. That's the call of the [district attorney's] office."

But Truong buys their promises.

Anatomy Of A Bad Confession, Part 1

Anatomy Of A Bad Confession, Part 2

"You do," Pageau replies, in an even lower voice.

Truong sobs for a whole minute, then delivers her confession: "I smothered Khyle."

When the detectives ask if she knows why she smothered Khyle, she says no and drops her head.

Later, she asks, "Is it OK if I leave now?" and "Will me and my brothers get to go to foster care?" Powers says those questions point to how clueless Truong was.

"[That] shows what was going on in her mind at the time," he says. " 'I will make the admission, and I can go forward in my life and my brothers can go forward in their lives,' not processing at 16 years old that she's just admitted to homicide."

The detectives tell Truong they're putting her under arrest.

"It has to be today," Pageau says.

In fact, it was more than a day — it was two years and eight months.

Making The Case For A Bad Confession

On the tapes, the detectives promise Truong that she would go into the juvenile system if she confessed, but the teenager was charged as an adult with murder. Denied the right to attend her son's funeral, she was sent to jail where she spent her first four months in solitary confinement and on suicide watch.

"This entire case went off the rails from the moment these two officers decided that Nga Truong was guilty," says attorney Ed Ryan.

Truong had been locked up for two years when Worcester Superior Court Judge Janet Kenton-Walker heard Ryan's motion to suppress the confession. At center stage was the police videotape, and problems filled the screen as soon as Kenton-Walker started watching.

In the first three minutes of the recording, it becomes clear that the detectives don't even know how old their suspect is.

At 16, Truong is still a juvenile, and as a juvenile she's entitled to special Miranda rights that the cops have failed to give her. That was the first reason the judge gave for throwing out the confession.

Kenton-Walker also concluded that Truong was "a frightened, meek, emotionally compromised teenager who never understood the implications of her statements."

In other words, Truong's statements weren't voluntary. That was the second reason Kenton-Walker gave for ruling in February 2011 that the confession was inadmissible and could not be used at trial.

Kenton-Walker also found that the detectives' use of false statements, deception, trickery and implied promises led to Truong's confession.

"There was no longer a confession in the case, nor any physical evidence," he says.

The lack of any physical evidence raises the question of why the two detectives presumed Truong to be guilty in the first place.

The official autopsy states the manner of Khyle's death to be "undetermined," and the death certificate describes the cause of death as "asphyxial death consistent with but not exclusively diagnostic of suffocation." Contributing factors, it says, were strep throat and tracheobronchitis. That's all on top of a history of asthma. Finally, the boy's body temperature was 101 degrees an hour after he died, suggesting he had a fever.

Whatever else may have happened to Khyle Truong, there's no doubt he was a sick boy.

"Mistakes were made," Early says, but he won't say anything critical about the Worcester Police Department.

Watch An Interview With Nga Truong:

Three Years Later And Trying To Move On

When I ask Nga Truong what is was like to get out of jail, she says she can't even explain it.

In December 2011, just after the third anniversary of Khyle's death, Truong turned 20.

But the department did release a written statement saying that Pageau and Doherty "continue to perform their duties as investigators with the full support and confidence of the police administration."

Truong has been free for just four months. She says she's struggling to rebuild her life, but she's no longer angry at the police — they were just doing their job.

I finally get to ask her why, three years ago, she confessed to something she didn't do.

"It was a pretty long two hours, and all I could hear throughout those two hours was that they were going to give me help if I confessed," she replies. Then she apologizes, bows her head and starts crying.

"I never thought of the consequences."