Accessibility links
Egypt, Tunisia Try To Turn Elections Into Democracy The revolutions in Egypt and Tunisia took place in a matter of days, filling those countries with hope of a brighter future. Both countries have held elections, but creating a democracy will take time. 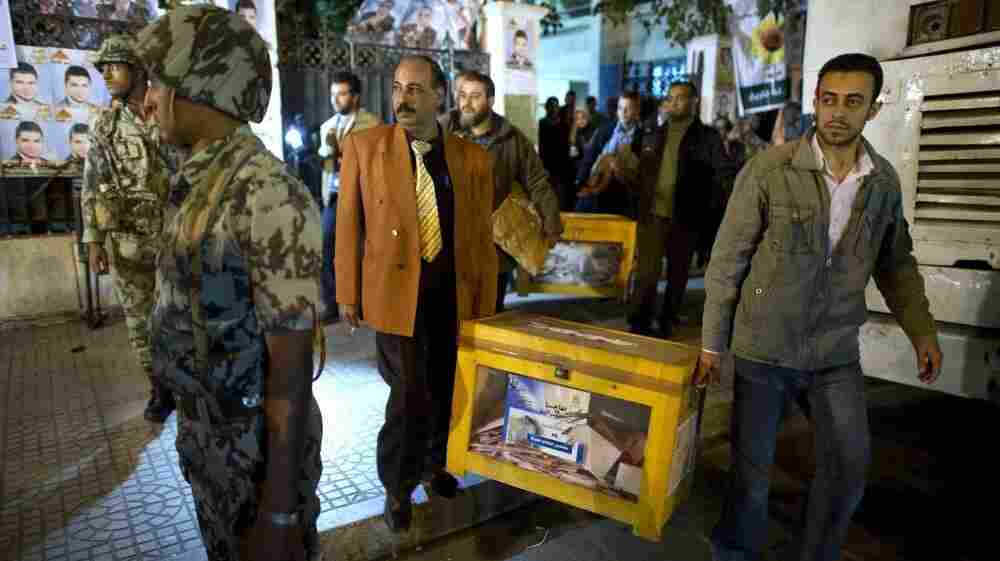 Egypt is holding parliamentary elections, but the military remains the most powerful force in the country. Here, election officials take away ballot boxes from a polling station in Cairo on Nov. 29, 2011. Odd Andersen/AFP/Getty Images hide caption 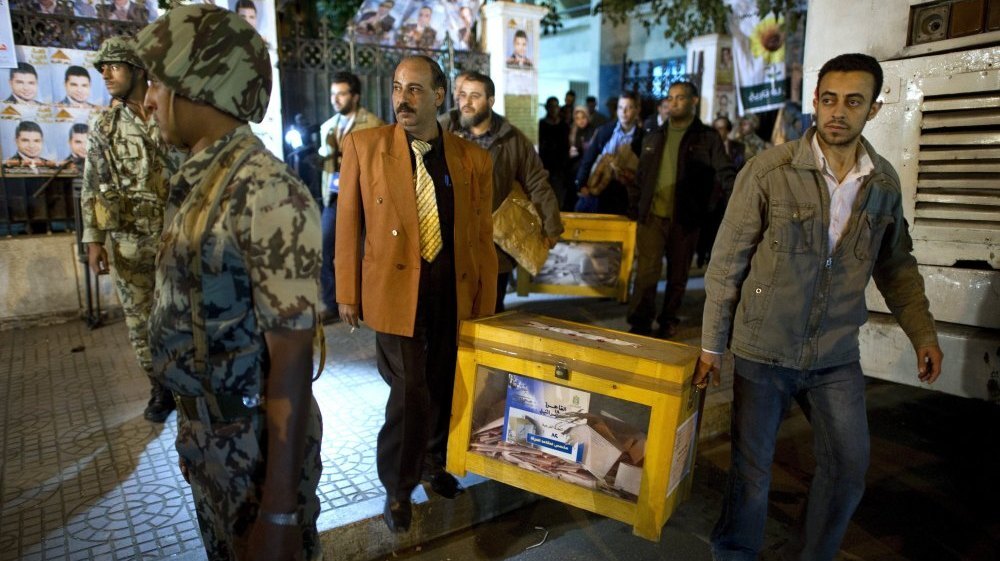 Egypt is holding parliamentary elections, but the military remains the most powerful force in the country. Here, election officials take away ballot boxes from a polling station in Cairo on Nov. 29, 2011.

One year ago, the people of Tunisia and Egypt rose up against their autocratic rulers and forced them from power. Those revolutions spread across the Arab World, leading to the region's biggest upheaval in decades. It's still not clear how these seismic changes will play out, and so far, the results have been mixed. Today, NPR begins a six-part series looking at where the region stands today. In our first story, NPR's Soraya Sarhaddi Nelson reports on the elections in Egypt and Tunisia as these countries struggle to build democracies.

When Hosni Mubarak was in power for three decades, few Egyptians looked forward to what passed for elections.

Government-enlisted thugs bought or coerced votes from intimidated citizens in impoverished neighborhoods like Mina al-Basal in the northern port city of Alexandria. They made sure that just about no one other than candidates from Mubarak's ruling party won seats there.

It's a far different scene these days in Mina al-Basal, where people who took part in the first election since Mubarak's ouster say they finally felt their votes mattered.

Cheerful campaign volunteers working for candidates from across the political spectrum wooed the throngs of voters with speeches and pamphlets before and even during the recent parliamentary polls.

Among those offering voting advice were men with long beards, volunteers for the ultra-conservative Salafist movement.

Manning their booth on one street corner was Sayed Ahmed Youssef, who says he's never felt this free to express himself politically.

Youssef adds that transparent and fair elections are the only way to make sure Egypt becomes a democracy.

But at a polling station across town in the upper-class neighborhood of Semouha, Ali Kassem expresses reservations about the polls after casting his vote.

His nephew was 28-year-old businessman and sometime political activist Khaled Said, whose death in June 2010 helped provoke the uprising that ousted Mubarak. Said was killed by police officers who dragged him away from an Internet café and slammed his head into nearby stone steps.

The police claimed he was a drug peddler, charges his family and supporters rejected.

Kassem, who ran for parliament on a secular centrist ticket, says the kind of impunity Mubarak and his security forces enjoyed will end if there's a duly elected government.

But Kassem complains that voters are being manipulated by some candidates, including those of the Salafist party. He and others accuse the fundamentalist movement of illegal campaign tactics, coercion and backroom deals to garner votes.

Independent monitors acknowledge some irregularities at the polls. But overall, they've declared the elections, which are being held in stages and are still underway, to be free and fair.

What's making secular Egyptians even more uncomfortable is that Islamists are emerging as the victors. The once-banned Muslim Brotherhood has collected well over 40 percent of the ballots so far and the Salafists more than 20 percent.

Many Egyptian liberals fear an Islamist-dominated parliament will try and replace Egypt's nascent democracy with a religious state like Saudia Arabia.

The Brotherhood and Salafists have long been known for their charitable and social work. Khaled Fahmy who chairs the history department at the American University in Cairo, says that the Islamist movements are viewed as honest brokers that will bring badly needed relief to the country's mostly impoverished population.

It touches, however, very resonant chords with millions of Egyptians who feel disenfranchised, who feel oppressed, who feel that the country has been usurped by a Western, liberal, intellectual, artistic elite, and it's time to go back to the basics.

Nabil Fahmy, former Egyptian ambassador to the U.S., on efforts to build political parties in Egypt

Other analysts say the Islamists benefitted from the rush to elections by the military rulers who took over when Mubarak resigned.

They say youth groups that were the backbone of the revolution didn't have enough time to form political parties. Plus, most of the candidates taking part in the multi-phased elections lacked political experience.

"While the Brotherhood and Salafis didn't exist in the legal sense, they had a social network, so they had a presence out there and they could mobilize," he says.

But whether that mobilization will translate into political power isn't guaranteed, even for the Islamists. For one thing, the ruling military council insists it will retain ultimate authority even after the new parliament is seated. And the role of the legislature is still undefined.

Its chief task will be to draft a new constitution. How to replace the old version that placed most power in the hands of the president is a matter of considerable debate. 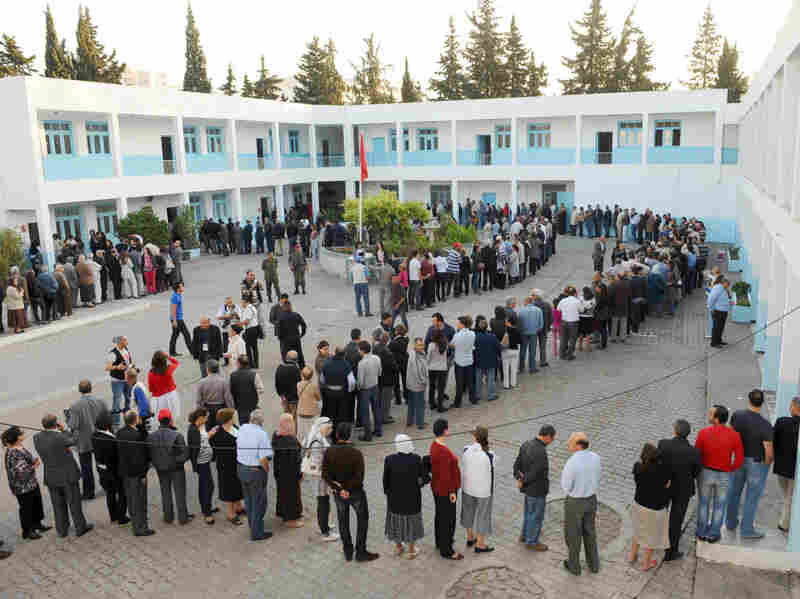 Tunisians have elected an assembly to write a new constitution. Voters are shown here on Oct. 23, 2011, outside a polling station in the capital Tunis. Fethi Belaid/AFP/Getty Images hide caption 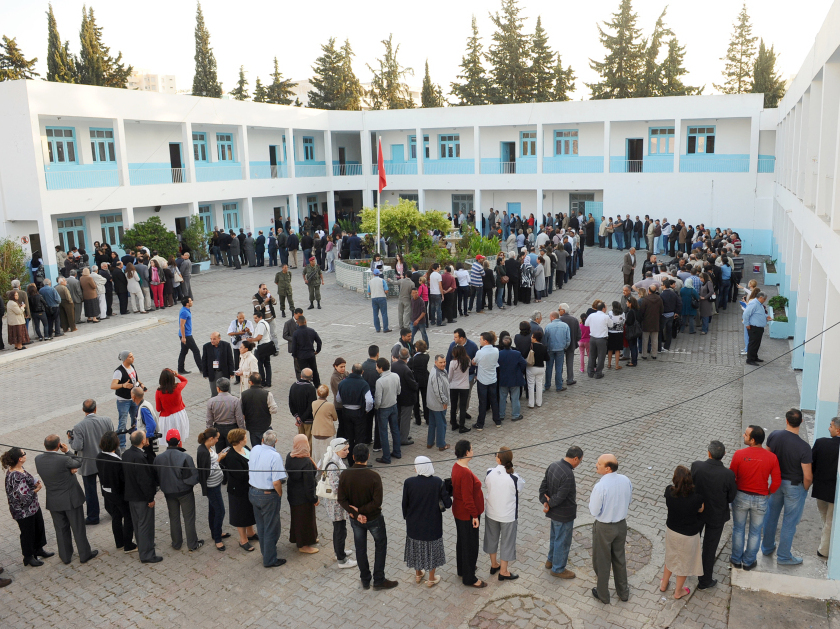 Tunisians have elected an assembly to write a new constitution. Voters are shown here on Oct. 23, 2011, outside a polling station in the capital Tunis.

Fahmy, the former ambassador, argues it would have made more sense if Egyptians had put off electing a parliament until after a new constitution was in place to define the role of government.

In contrast, Tunisia's first election after the revolution was held to elect a constitutional assembly.

Turnout for the October poll in Tunisia reached 90 percent in some areas and was seen as fair.

Just as in Egypt, the Islamists emerged the victors. Some liberals in Tunisia fear the newly elected Islamists will try to draft a constitution that ends the country's secular traditions. There have already been protests and clashes over how big a role Islam should play in their society.

"I don't think we can say that Tunisia today is a democracy," says Fares Mabrouk, the founder of the Tunis-based Arab Policy Institute, a think tank that supports democratic change in the Middle East.

"Democracy is not only about free elections, fair elections. To have a democracy it's also about having the right institution, the right counter-powers, the right civil society," he says. "It's a learning process for all the actors inside our civil society and it will take us few years before saying, 'Yes, we succeeded our transformation,'"