Accessibility links
In Post-Gadhafi Libya, Islamists Start To Rise Moammar Gadhafi cracked down hard on Islamists throughout his long rule. With his overthrow and death, Islamist groups are now able to operate freely. 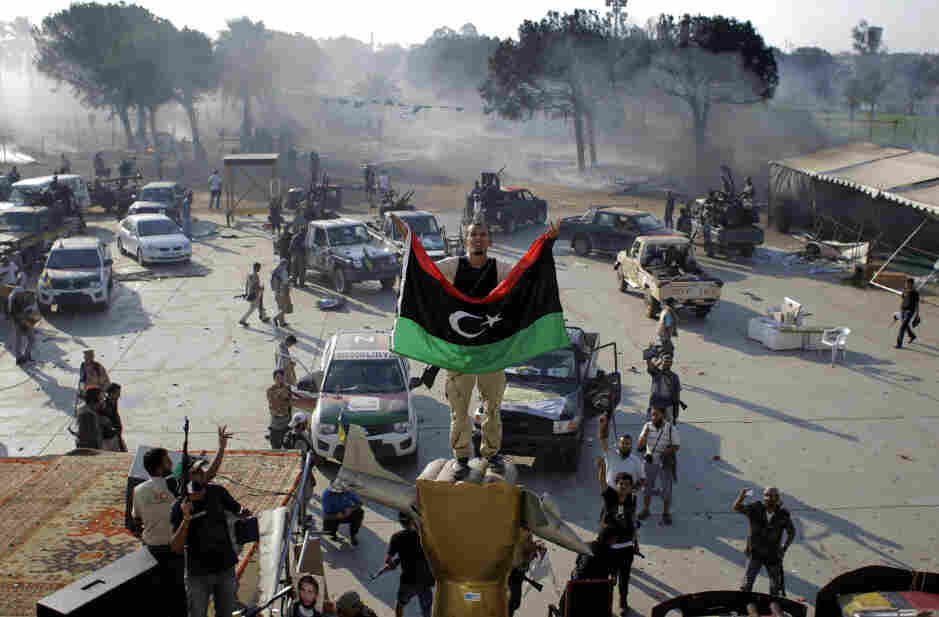 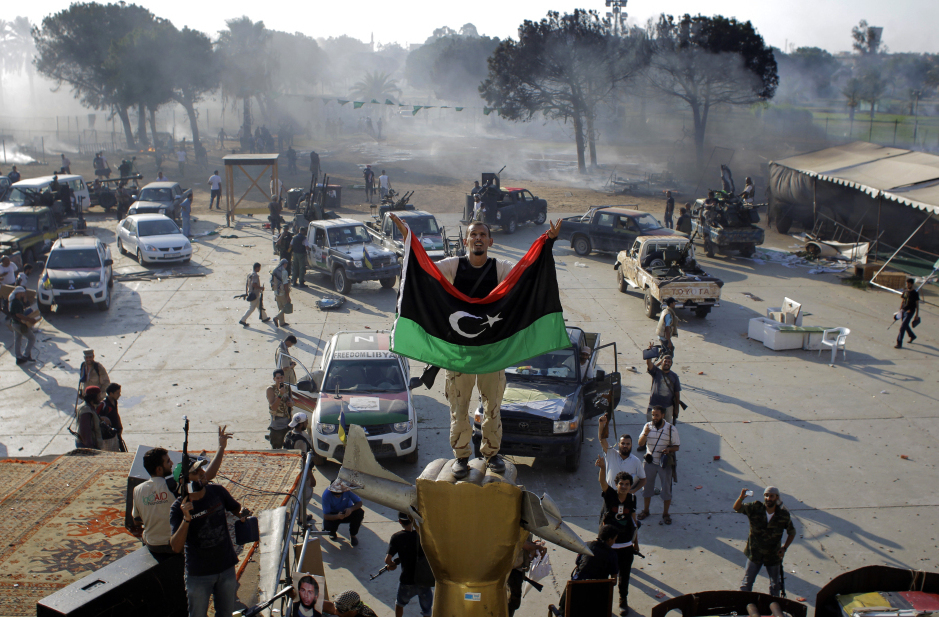 A rebel fighter stands on a monument inside Moammar Gadhafi's main compound in Tripoli.

One year ago, protesters across the Arab world began to rise up against autocratic rulers, forcing several from power. These revolutions have led to the region's biggest upheaval in decades. It's still not clear how these seismic changes will play out, and so far, the results have been mixed. In a six-part series, NPR is taking a look at where the region stands today. In the second installment, NPR's Lourdes Garcia-Navarro reports on how Islamists in Libya, long suppressed during Moammar Gadhafi's 42-year rule, are now able to operate freely.

Kolo Street in Tripoli is unpaved, potholed and lined with crumbling concrete and mud brick homes. The residents here complain of decades of neglect under Moammar Gadhafi.

But now, after Libya's revolution, there's a sudden interest in their plight, and it's not coming from the transitional government.

On a recent day, a man answered questions about his family's situation from members of an Islamic charity that just started operating in the neighborhood. The group is promising to help him and the six members of his family with food and financial support.

Today: Islamists On The Rise

One of the men, Shukry Jualy, who started the Helping Hands charity, says he is a Salafi Muslim — part of an ultra-conservative movement that exists in a number of Muslim countries.

While Jualy says his group has no political affiliation, Salafist parties have done well in neighboring Egypt's elections. Much of their support came through grass-roots community work that translated into votes.

Unlike in Egypt, though, Islamists in Libya are starting almost from scratch. Gadhafi was much more aggressive in stamping out Islamist influences in Libya. For example, his security forces arrested anyone with a long beard, a sign of Muslim piety. And attending the early morning prayers at mosques, a timeless ritual in most every Muslim country, was actually forbidden in Gadhafi's Libya.

But now that the dictator is gone, Islamist groups are wasting no time as they try to spread their influence.

The men in this makeshift prison in Misrata are from all over Libya, captured in various battles, all purported to be Gadhafi fighters. At prayer time, they line up in a covered courtyard, kneeling and pressing their heads to the floor.

One of the striking things is that all of the men have uncut beards.

A prison guard calls the prison a "rehabilitation center." He says the men are required to pray five times a day and they are taught Islam.

Guard Haitham Mohammed says when the prisoners arrive, they have no idea how to read the Quran or how to be properly observant Muslims. The guards then begin teaching them, he says.

But what they are being taught is the Salafist strain, which the men who run the prison follow.

The prisoners say they are obligated to pray and leave their beards uncut, and they're forbidden to smoke. Anyone caught breaking the strict code is whipped.

Fattah Abdulsalam Dares runs this facility. Like many things in Libya these days, his appointment was haphazard. He had no prison guard experience. He's a businessman who became a rebel fighter and then took over the prison.

Dares' story is similar to that of many Islamists in Libya. Charming and voluble, he recounts how he was arrested and tortured under Gadhafi in the very same building he oversees as a prison now. His crime, he says, was simply sporting a long beard. Now, he encourages all of the prisoners to wear one.

"We Islamists want to show people our real face, not the evil one painted on us by the former regime," Dares says. We believe in charity and honesty, he says.

The Islamist message has resonated across the region in the wake of the Arab Spring.

"There's no doubt that this is the moment for Islamist politics and Islamist movements," says Samer Shehata, an assistant professor of Arab politics at Georgetown University.

Michael Hanna, a fellow at The Century Foundation, a progressive, nonpartisan think tank, adds that the decades of repression have actually helped push Islamist groups toward their strong position now.

There's no doubt that this is the moment for Islamist politics and Islamist movements.

"This is a reckoning that was a long time in coming," Hanna says. "The postponement of the integration of political Islam into the political process, and the opening up of democratic potential probably exacerbated the current situation."

Still, it's something that makes many in the West uneasy. In the case of Libya, the fear is that NATO's intervention will clear the way for hard-line Islamists to take power, as happened in Afghanistan in the 1990s after the Soviets were driven out.

Already, many of the most powerful Islamists in Libya have a complicated relationship with Western nations. Britain and America often colluded with Gadhafi's regime against Islamist militants in the wake of the attacks of Sept. 11, 2001.

Among the most infamous cases is that of Abdul Hakim Belhaj, who headed the now defunct Libyan Islamic Fighting Group. It was deemed a terrorist organization with links to al-Qaida, though Belhaj has denied belonging to Osama bin Laden's global terrorist group. Belhaj is now the powerful head of the Tripoli Military Council.

In an interview with NPR, he told of his rendition back to Libya from Malaysia in 2004.

Belhaj is now suing the British government for what he says is its complicity in his kidnap and torture at Gadhafi's hands. Documents recently discovered seem to support his claim that Britain's MI6 organized his transfer back to Tripoli.

Belhaj now has political aspirations, and he's been in talks with other prominent Islamists since last April. He plans to start a political party, but infighting has delayed a formal announcement.

There are many different kinds of Islamists in Libya, and there are deep divisions among them. The Libyan Muslim Brotherhood, which was initially slated to join the group, has now backed out.

Libya's Islamists are worried about their reception in a country with no history of political parties for 42 years and relentless propaganda by the Gadhafi regime against them. So, they have been trying to attract other groups to what they are branding a nationalist party and calling the National Assembly.

The party's manifesto, though, was written by one of the leading Islamist figures in Libya, Sheik Ali Sallabi.

In an extensive interview with NPR, Sallabi said the new party will be inclusive and independent in nature. While Islam and Sharia law will be the basis for any Libyan constitution, he says, he looks to models like Malaysia and Turkey instead of Saudi Arabia and Pakistan. He talks of a moderate Islam that is open to the outside and democratically minded.

It's a speech intended to ease concerns of critics in the West and in Libya. Recent polls show that while Libyans are pious and believe in Islam's role in society, they are extremely leery of Islamist parties.

"I think they are going to limit our freedom," says pharmacist Nouri Ghariyani. "Of course, we are Muslim but not Islamic. It is different; personally, I don't like them."

In many street interviews, people from all walks of life reiterated that fear.

And so Libya's Islamists are treading gingerly for now, waiting to see if, after 40 years under the shadow of a dictator, they can seize what seems to be their day.