Accessibility links
Romney And Santorum Split The Spoils In Iowa Former Massachusetts Gov. Mitt Romney eked out an eight-vote win after he and former Pennsylvania Sen. Rick Santorum swapped the slimmest of leads back and forth in Tuesday's caucuses. With returns complete, each had won the support of roughly 25 percent of caucusgoers.

Listen
Romney And Santorum Split The Spoils In Iowa

Romney And Santorum Split The Spoils In Iowa

The results from Iowa suggest what has been clear for months: Republicans remain divided about their presidential choices.

Former Massachusetts Gov. Mitt Romney eked out an eight-vote win after he and former Pennsylvania Sen. Rick Santorum swapped the slimmest of leads back and forth in Tuesday's caucuses. With returns complete, each had won the support of roughly 25 percent of caucusgoers.

Listen To A Special Podcast

Despite the near-tie, Iowa caucus rules do not allow for a recount. Texas Rep. Ron Paul was third at 21.5 percent, according to The Associated Press.

Santorum emerged suddenly in recent days after spending the past year unable to break out of the low single digits in public opinion polls. His strong showing launches him to the front ranks of contenders.

"The big story, of course, is Rick Santorum," says Jack Pitney, a political scientist at Claremont McKenna College in California. "Tonight, he graduates from minor candidate to major candidate."

But Pitney stressed that Santorum still trails elsewhere and does not as yet have the organization or money in place to build on his success in coming contests — New Hampshire, South Carolina and Florida.

Santorum immediately tried to seize the mantle of conservative support. "It's now or never for conservative voters," Santorum wrote in a fundraising appeal sent out by email Tuesday. "We can either unite now behind one candidate and have a conservative standard bearer in 2012, or have the GOP establishment choose another moderate Republican who will have a difficult time defeating Barack Obama in November."

Gracious In A Tie

Romney also leveled renewed attacks against Obama. After congratulating both Santorum and Paul for their showings before his supporters in Iowa, Romney said: "This is a campaign night where America wins. We're going to change the White House and get America back on track."

The former Massachusetts governor remains the favorite in next-door New Hampshire, which holds its primary next Tuesday. "It certainly feels like we're in a good position here," says Tom Rath, a Romney backer and former New Hampshire attorney general. "But there's a week to go."

Romney appeared to do best in Iowa among those who are making their picks based on a candidate's perceived ability to defeat President Obama in the fall.

But with support that didn't quite reach 25 percent in Iowa, Romney will still face questions about when and if he will seal the deal with GOP primary voters.

A decisive win in Iowa would clearly have put him in good shape heading into New Hampshire, says Art Sanders, a political scientist at Drake University. 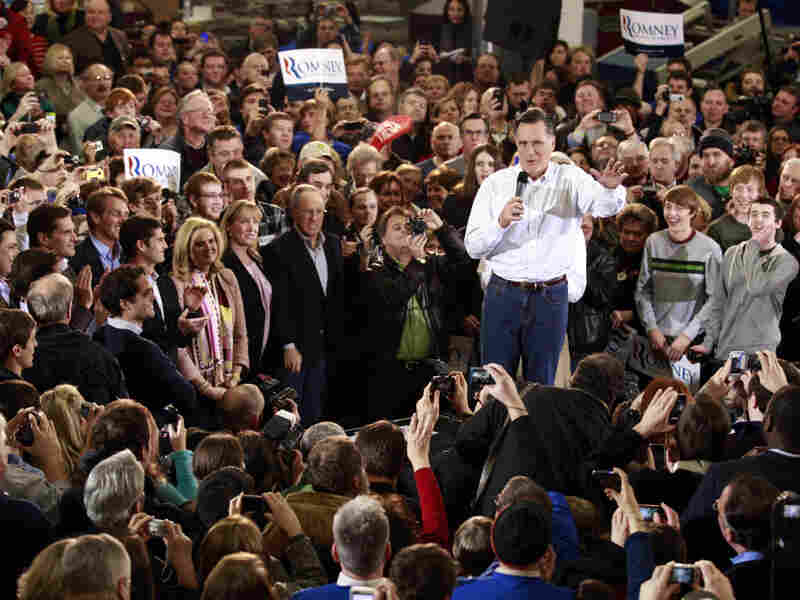 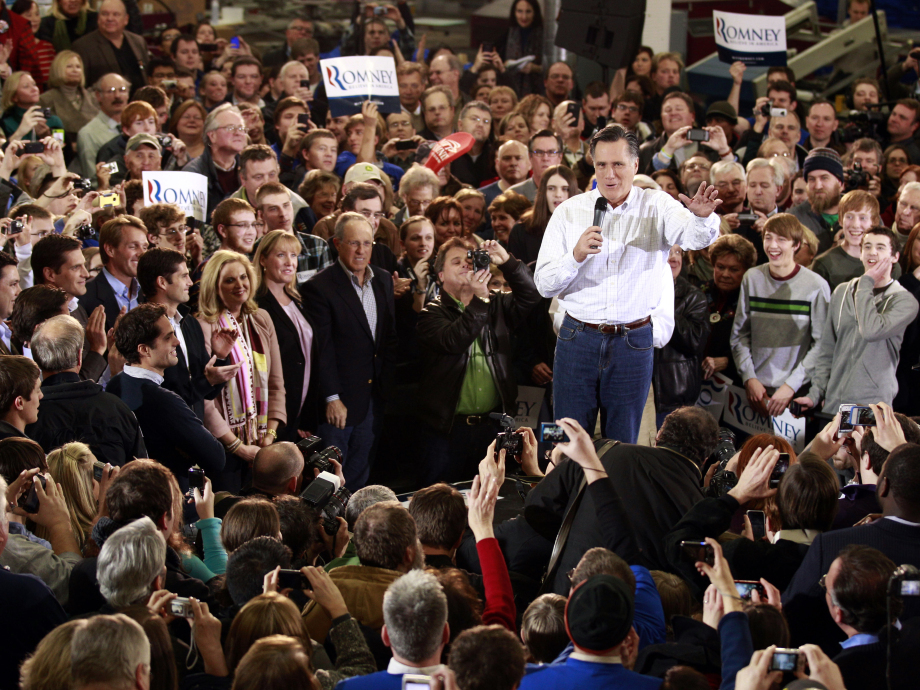 The Bounce Beyond Iowa

Santorum performed well among the most conservative and religious segments of the electorate, Pew Research Center Director Andrew Kohut said on NPR's All Things Considered. Most Santorum backers decided to support him just in the past few days, with as many as a quarter deciding to support him just Tuesday, Kohut said.

The photo finish in Iowa will present Santorum with a considerable increase in media attention, as well as both fundraising help and additional scrutiny from the press and other candidates.

"The whole thing that makes Iowa important is the media that it generates for the winner," says David Yepsen, who was a longtime political reporter for the Des Moines Register.

"It's the cover of Time magazine and what the networks are talking about," says Yepsen, who now directs a public policy institute at Southern Illinois University. "That's the prize."

Paul, the Texas congressman, ran well ahead of the other candidates among younger caucusgoers, running up a big lead among those under 40, according to entrance polls. He also did well among the many Iowans participating in a caucus for the first time. 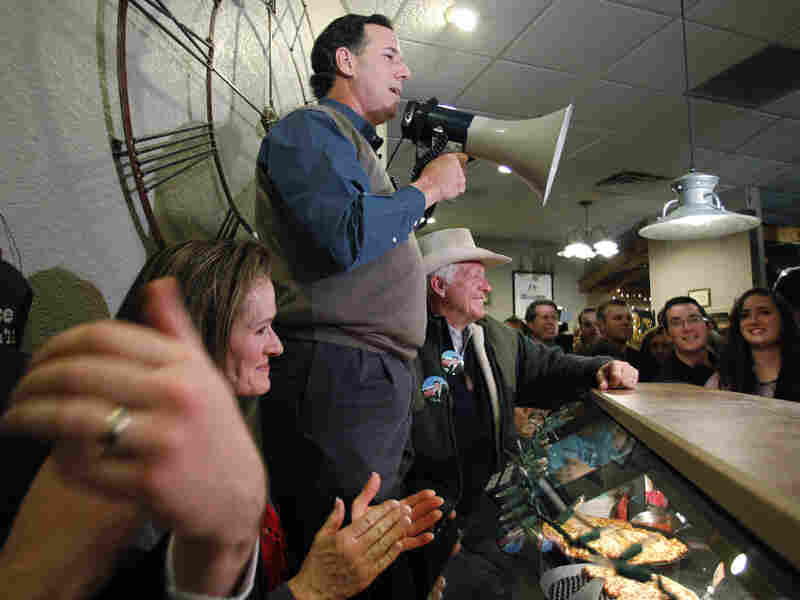 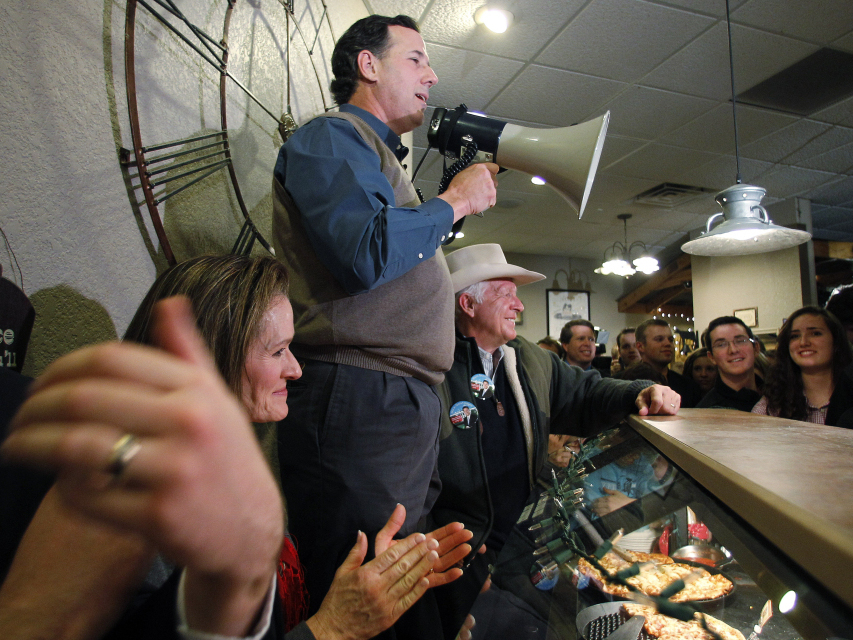 Former Pennsylvania Sen. Rick Santorum, who has recently surged in the Iowa polls, addresses Iowans during a meet-and-greet campaign stop Monday at the Pizza Ranch in Altoona.

"I'm really surprised a little bit by Ron Paul," says James M. McCormick, who chairs the political science department at Iowa State University. "I expected him to do well, but it looks like he might be doing better than I expected here."

Paul has put together a well-regarded organization in New Hampshire. In addition, former Utah Gov. Jon Huntsman, who decided to skip Iowa, has been climbing in New Hampshire polls, although he trails Romney and Paul.

Santorum will press his case for support there in the coming week, including at a pair of debates this weekend, but he has remained in single digits in New Hampshire polls thus far.

Newt Gingrich, the former House speaker who briefly emerged as a top-tier candidate toward the end of 2011, intends to challenge Romney in New Hampshire with strong ads, but he insisted Tuesday night they would not be "nasty."

"If the truth seems negative, that may be more of a comment on [Romney's] record than it is on politics," said Gingrich.

Gingrich will pin his fondest hopes on the Southern states voting later this month, including South Carolina and Florida.

Texas Gov. Rick Perry, who finished fifth in Iowa, announced Tuesday that he was returning to his home state to reconsider his campaign. And Rep. Michele Bachmann of Minnesota, who narrowly edged out Paul in the Iowa straw poll last August, may be out of steam following a sixth-place finish in the caucuses, many pundits and party officials suggested Tuesday.

"Bachmann is functionally done, whether she acknowledges it in two weeks or this week," says Charlie Arlinghaus, director of the Josiah Bartlett Center for Public Policy, a free-market think tank in Concord, N.H.

Santorum now stands as the candidate with the best chance of derailing Romney's hopes for the GOP nomination.

"We are off to New Hampshire," he told a hotel ballroom crowded with supporters in Johnston, Iowa, on Tuesday. "With God's grace, we'll have another fun night next week there."