Accessibility links
Syrian Uprising Raises The Specter Of Sectarian War A major factor in the Syrian revolt is the battle between sectarian groups. The Assad family and the minority Alawites have held the top jobs for decades, and feel they would be trampled if the majority Sunni Muslims come to power. These sectarian tensions are never far from the surface in the Middle Eastern nations going through upheavals. 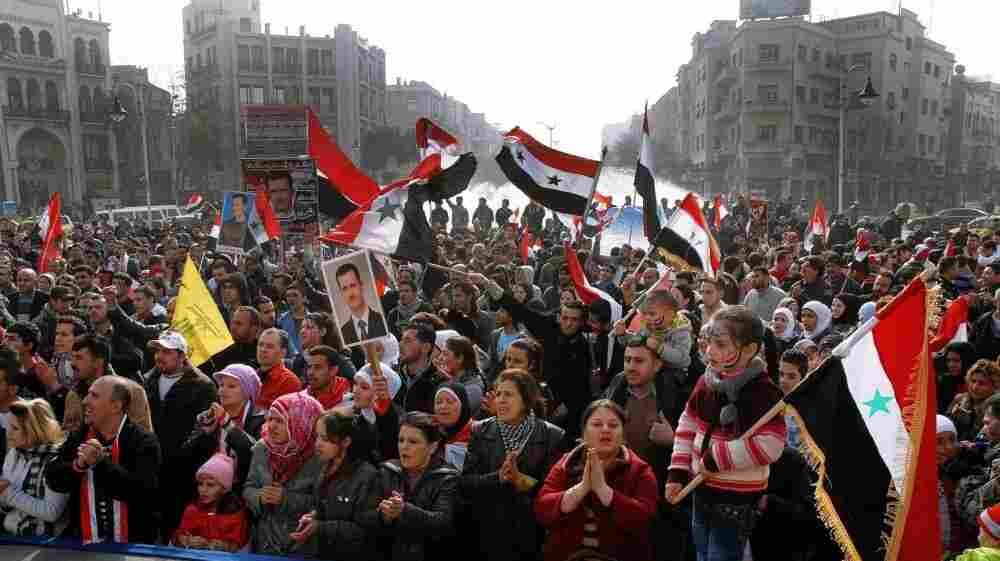 For the past 10 months, Syrians have taken to the streets in large numbers to oppose a repressive regime that has not hesitated to use force. The United Nations estimates more than 5,000 Syrians have died, and it is far from clear how the uprising will play out. President Bashar Assad's regime blames the revolt on Islamist militants and casts the uprising as a threat to Syria's minorities, including Assad's fellow Alawites and the country's Christians. As part of NPR's series looking at the Arab Spring and where it stands today, Deborah Amos examines the risk of sectarian conflict in Syria and the broader region.

To see how sectarian differences shape life in the Middle East, you need spend only a little time in this community made up of Alawites, an offshoot of Shiite Islam, and listen to the fears the residents express.

Everyone here is an Alawite — the same faith as Syria's President Bashar Assad. And Assad is smiling down on this neighborhood, from posters at the barbershop, on apartment buildings, and in every restaurant.

At a coffeehouse, over a heated card game, the players worry that a revolt that calls for an end to the Assad regime is directed against them.

"Bashar Assad, he's the best, believe me," says one man. Asked if the Alawites would suffer if Assad is ousted, he replies: "Of course. It's so bad. For Alawites, for Christians."

Syrian television plays in the background — a big plasma screen next to a picture of Assad with his father, Hafez Assad, who began the Alawite dynasty in 1970, ending the domination of the Sunni Muslim majority in Syria.

"I am Alawite, OK. But I feel like it's because I'm Alawite, someone wants to kill me," he says.

Just outside his office, Alawite children are literally singing the praises of the Syrian president.

The important thing to note about all this is that it's not happening in Syria. 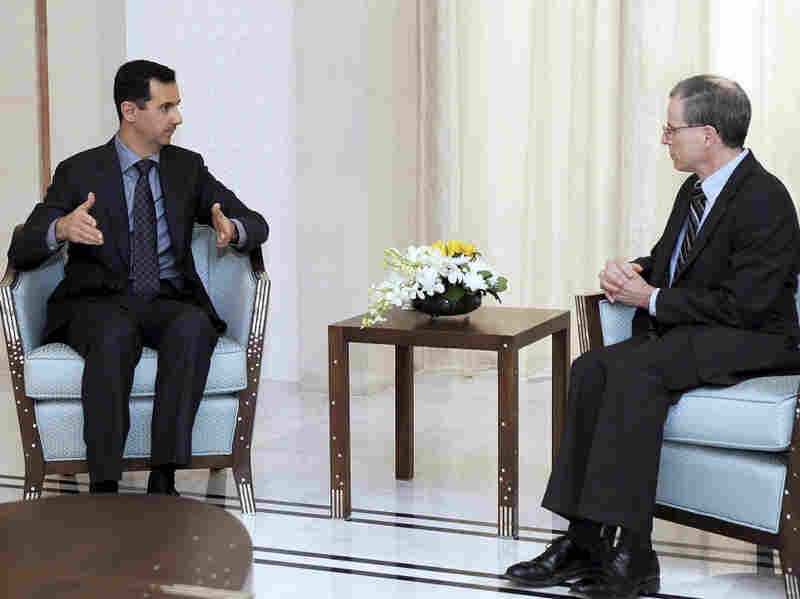 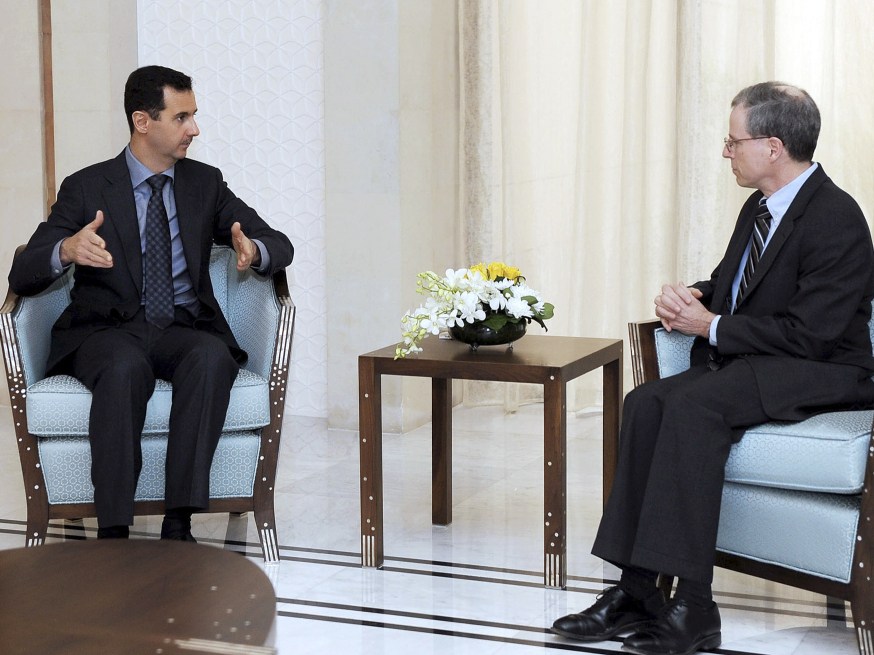 This is Jabal Moshen, a community that is part of Tripoli, Lebanon. Syria is 15 miles away.

Sectarian identity trumps borders for Rifaat Eid. Alawites are a minority in both Syria and Lebanon, and Eid sees a shared destiny. You always need a protector, he says. And as long as Assad is the strongman in Syria, Eid feels safe here.

The fate of minorities — the small fish of the Middle East — is a crucial question in the Arab uprisings of the past year.

In Egypt, minority Christians are wary of Islamists coming to power. Syria's minorities have largely sided with the Assad regime in a mostly Sunni Muslim revolt, says Fawaz Gerges, director of the Middle East Center at the London School of Economics.

"The Syrian government has basically branded itself as the protector of minorities," he says. "Not just the Alawite, but even the Christians and the Druze and other minorities in Syria. So, they have used sectarianism as a political tool."

In the heart of Damascus, churches built alongside mosques show a long history of tolerance. But Syria's diverse social fabric is fraying over the aims of the revolt, now 10 months old.

The Rev. Gabriel Daoud, a parish priest, has allowed his St. George Syrian Orthodox Church to be used a refuge for Iraqi Christians. They were targeted in a sectarian war and forced to cross the border for safety. Daoud is against an uprising that he thinks could turn Syria into another Iraq.

Asked if he detects anti-Christian sentiment in the uprising, he says: "I feel some of it. They do this chaos in this country."

Syria's state media insists the chaos comes from militant Islamists — or terrorists — who will end the protection for Syria's Christians to freely practice their faith.

Vali Nasr, a Middle East scholar at Tufts University, describes what might be called Sectarianism 101. The Syrian regime incites sectarian tensions, then presents itself as the only force that can hold the country together.

It needs to make sure that its Alawite base, and also the Christians in the country, remain in its corner, and then it can go to battle against the Sunnis trying to divide them, co-opt them or intimidate them, according to Nasr.

But the Assad regime needs to make sure that the 20 percent of the country that has sided with it remains supportive. Without that, the regime doesn't have a chance, Nasr adds.

The Syrian government has basically branded itself as the protector of minorities. Not just the Alawite, but even the Christians and the Druze and other minorities in Syria. So, they have used sectarianism as a political tool.

Fawaz Gerges, director of the Middle East Center at the London School of Economics

"In Syria, in particular, it is a revolution of young people, and the young people are not sectarian," he says. "We don't know the language, we don't understand the concept."

He points to the young Christians and young Alawites who have joined the protest, standing with Sunni Muslims, risking everything for change.

"Regimes have incited and played on difference for the last 50 years — what do you expect, it's not magic," Tarif says. "We need the space to mature, to become citizens. The concept of becoming citizens is not known to us; that's what we need to learn."

A democratic system that guarantees minority rights is what's needed, according to Tarif, but it's an untested model in the region. With more than 5,000 dead since last spring, Syria's divide between pro- and anti-government forces is starker than ever, he says.

"And now people are gathered around a concept of fear," he says. "When a family is sitting at night before they go to bed, they are not sectarian, they are afraid — they are afraid from the neighbor who is different, who is loyal to the regime or vice versa. It is fear."

Assad has played his survival card well, says Gerges of the London School of Economics.

"I don't believe that the Syrian crisis is about sectarianism," he says. "This is not about Sunnis vs. Alawites and Christians. This is about national security and regional security. And President Assad has been basically relentlessly hammering this particular point: 'Do you want to be another Iraq?'"

Everyone in the region — already suffering from a dangerous sectarian divide — is watching Syria closely.

The Sunni powers, led by Turkey and Saudi Arabia, have lined up to support the protests. Meanwhile, Syria's allies — Iran, Iraq and Hezbollah, the Shiite power in Lebanon — stand against them.

A sectarian war in Syria would inflame the broader region. Fears of that nightmare scenario have left some countries paralyzed when it comes policy choices, discouraged international intervention and has helped keep the Assad regime in power.