Accessibility links
Indonesian Economy Booms, Its Infrastructure Groans Indonesia can boast a strong economy and a recent credit upgrade. But its crumbling infrastructure is not keeping up with the needs of the rapidly growing country. 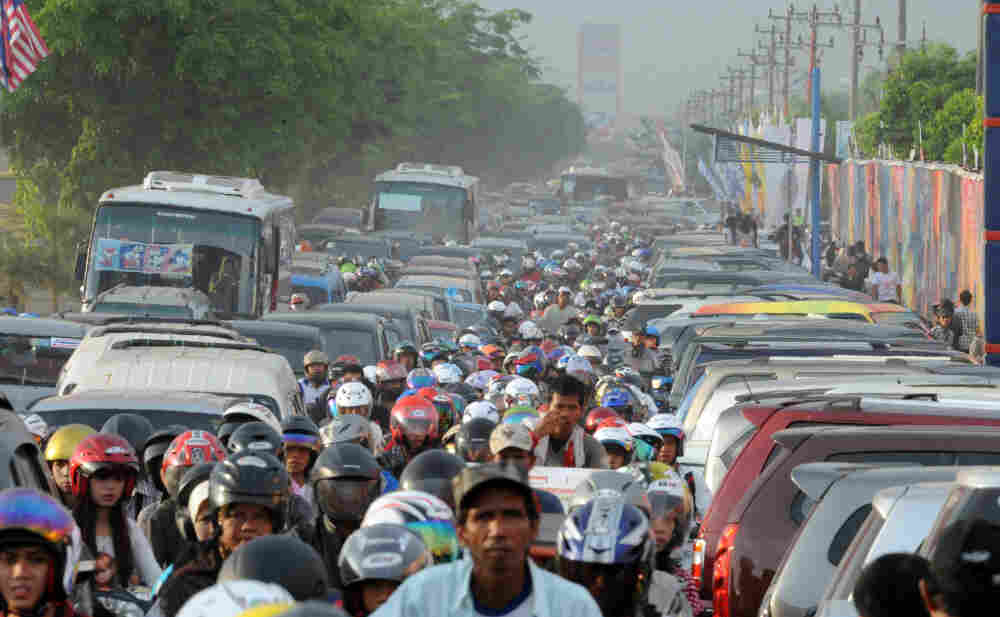 Indonesia has one of the world's fastest growing economies, and it's already the largest in Southeast Asia. This growth and stability recently earned it a major credit upgrade at a time when Western countries are fearful of downgrades.

Yet this vibrant economy has an Achilles' heel: its crumbling, overwhelmed infrastructure.

The problem becomes painfully apparent this time every year, when the rainy season fills commuters with dread in the capital, Jakarta, and many other cities.

Commuters on Indonesia's overcrowded railways are only slightly better off. At one railway station, a woman named Mina balances a large bundle of fruit on her head as she waits for her train. This merchant, who uses just one name, looks aged far beyond her 37 years.

Each day, she spends anywhere from an hour-and-a-half to three hours getting from home to the market. Getting to and from work can cost up to a fifth of her monthly income, and she says it's depressing.

Public space is just totally occupied by the rich, who have cars and motorbikes. So we don't have the chance to interact in a city, which I would define as healthy, where we meet in open space, in public space.

Hans Ulrich Furke, an urban planner from Germany who advises the Indonesian government

"I am very sad when it rains. I have to travel far to sell my fruit," Mina says with a subdued, resigned tone. "When it rains, I get soaked getting on and off the train. It's scary and tiring. The rain only makes my load heavier."

As Mina is talking, a security guard tries to pry loose a knot of passengers who got stuck in the doorway after trying to all squeeze in at once. Nimble young men in flip-flops scramble up the train's side and sit on the roof. The train pulls away, leaving Mina on the platform to wait for another train.

Elly Sinaga, who is in charge of urban transport systems at the Ministry of Transportation, says bottlenecks are simply costing citizens too much.

"According to our survey, the transportation costs here in Jakarta and the surroundings are almost 30 to 40 percent of income," Sinaga says. "Also, our costs for the freight transport [are] very high."

Indonesia's economy is growing at about 6.5 percent a year, and the country spends about 3 percent of its GDP on infrastructure. If it were to increase that amount, its growth might compare more favorably to that of China, whose economy grows at 8 percent, with infrastructure spending of 9 percent.

Hans Ulrich Furke is an urban planner from Germany who advises the Indonesian government. He says that traffic has swallowed up almost all of the city's open spaces, leaving residents nowhere to congregate but in shopping malls. 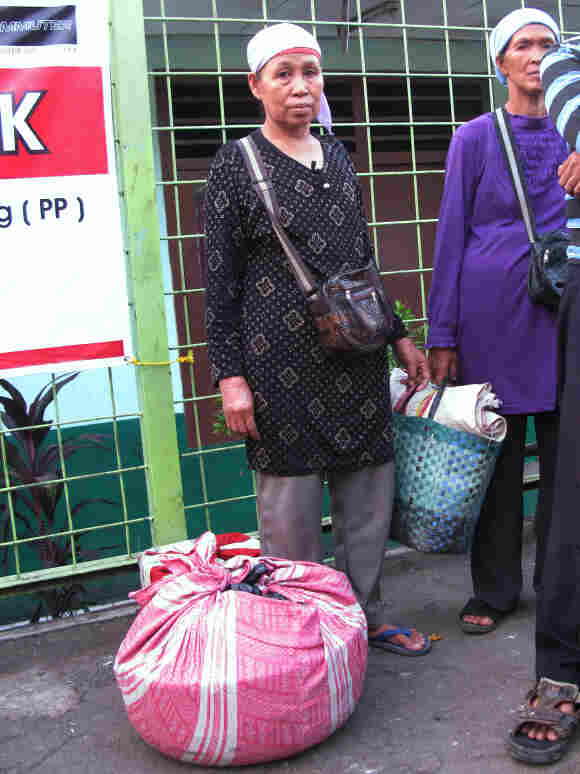 Fruit vendor Mina, who uses just one name, waits for a train home with her merchandise wrapped in a pink cloth. Yosef Riadi for NPR hide caption 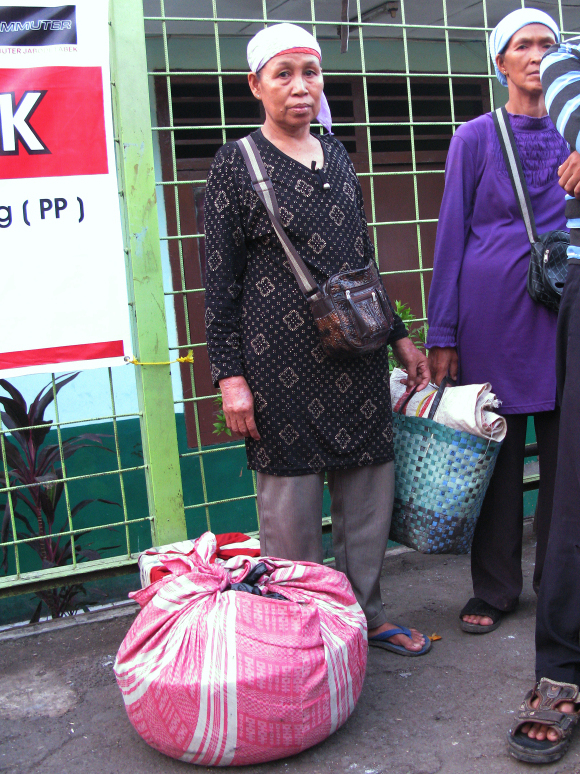 Fruit vendor Mina, who uses just one name, waits for a train home with her merchandise wrapped in a pink cloth.

"Public space is just totally occupied by the rich, who have cars and motorbikes," Furke says. "So we don't have the chance to interact in a city, which I would define as healthy, where we meet in open space, in public space."

Fuel is subsidized, and that makes driving private vehicles so cheap that they compete with public transport," he says. "Riding a motorbike in Jakarta is cheaper than public transport."

Vice Minister of Transportation Bambang Susantono says Jakarta is serious about improving the quality of its life and becoming a more livable city. He says pilot projects to clear the downtown area of traffic will be expanded.

"I think we will start not for the whole city center, but some part of the city center," Susantono says, "so that people can think that this is really the way for the future — the way we have the car-free day, for example. Now it's getting more and more popular."

Right now, Sunday mornings in central Jakarta are one of the few times it is blissfully free of cars. The fumes dissipate. The decibel level drops. It's the sound of what could be: Public buses trundle along. Families bicycle together, children rollerblade, and a curbside barista sells cups of instant coffee from his bicycle.