Accessibility links
Not Everyone Is Basking In Iowa's Afterglow The field of GOP challengers narrowed a day after the caucuses as Minnesota Rep. Michele Bachmann said she is ending her 2012 presidential bid. Meanwhile, Texas Gov. Rick Perry went home to regroup after his poor showing in the Hawkeye State.

Listen
Not Everyone Is Basking In Iowa's Afterglow

Not Everyone Is Basking In Iowa's Afterglow 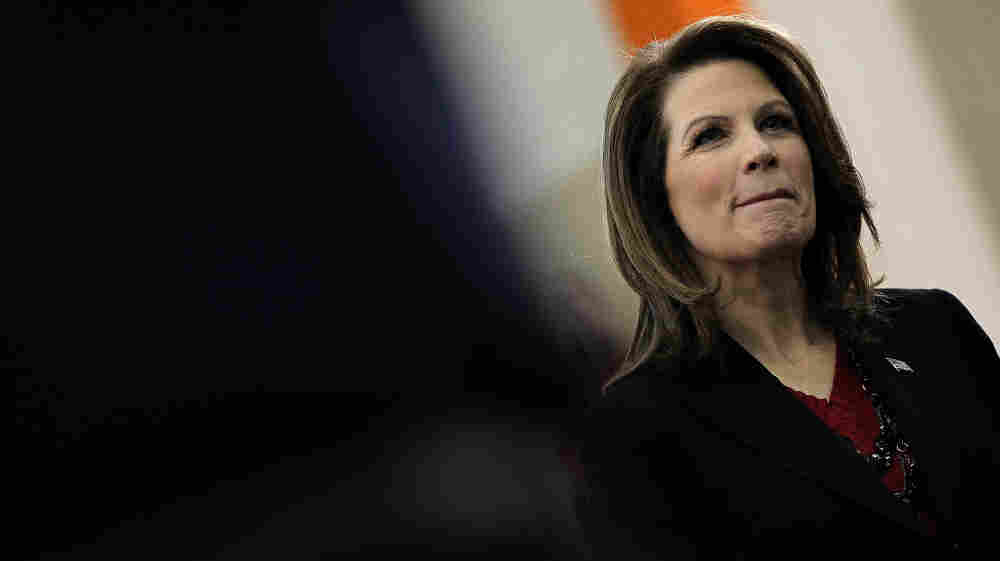 Minnesota Rep. Michele Bachmann, who got just 5 percent of the vote in Iowa's caucuses, referred to herself Tuesday as the "true conservative who can and who will defeat Barack Obama in 2012." On Wednesday, she bowed out of the race. Justin Sullivan/Getty Images hide caption

Iowa proved a road to victory for Mitt Romney, but it was a road to nowhere for Michele Bachmann.

"Last night, the people of Iowa spoke with a very clear voice, and so I have decided to stand aside," Bachmann said Wednesday at a West Des Moines news conference. The Minnesota congresswoman decided to end her 2012 presidential bid after finishing sixth in Tuesday's caucuses in Iowa — the state where she was born and where, just five months ago, she won a Republican straw poll in Ames.

Speaking deliberatively, Bachmann said she had "no regrets" whatsoever and that she will continue to fight for the causes she emphasized on the campaign trail.

The Iowa caucus thing is like a game show. Last night, Santorum had his Susan Boyle moment and a few others got voted off.

In her statement, Bachmann referred repeatedly to "Obamacare" and said the Republican Party must not miss a "once-in-a-lifetime opportunity" to repeal both the sweeping health care law under President Obama's watch and the financial regulation law known as Dodd-Frank.

"I ran because I believe Obama's policies, based on socialism, are damaging," she said. "I told you the truth that our country is in very serious danger. I didn't tell you what the polls said you wanted to hear."

That she still holds public office could be a factor in her decision, said Jonathan Geer, a political science professor at Vanderbilt University in Nashville.

"Bachmann has a congressional race to run, and there's talk of some opposition. She might need to go home and mend fences," he said.

Bachmann's announcement came hours after Texas Gov. Rick Perry said he would return home for "prayer and reflection" to decide whether to continue. But Perry later suggested that he is still in the race, tweeting: "And the next leg of the marathon is the Palmetto State ... Here we come South Carolina!!!" 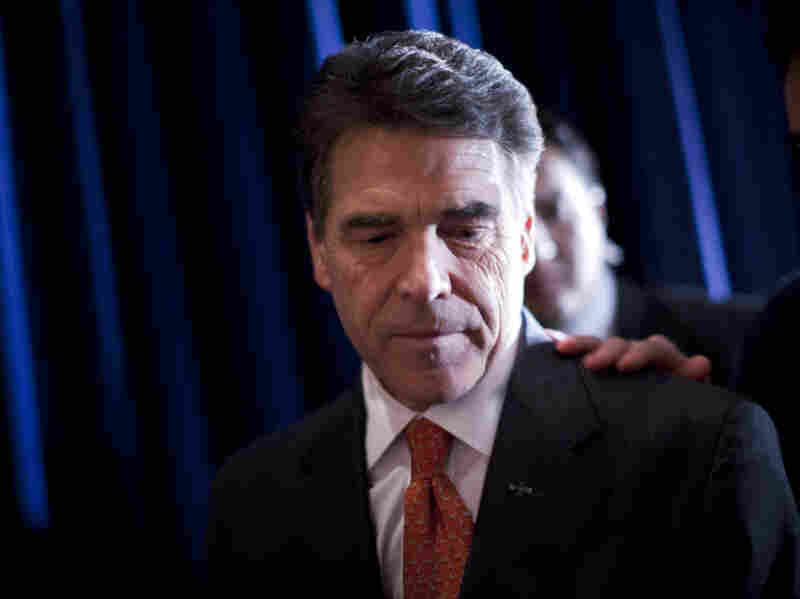 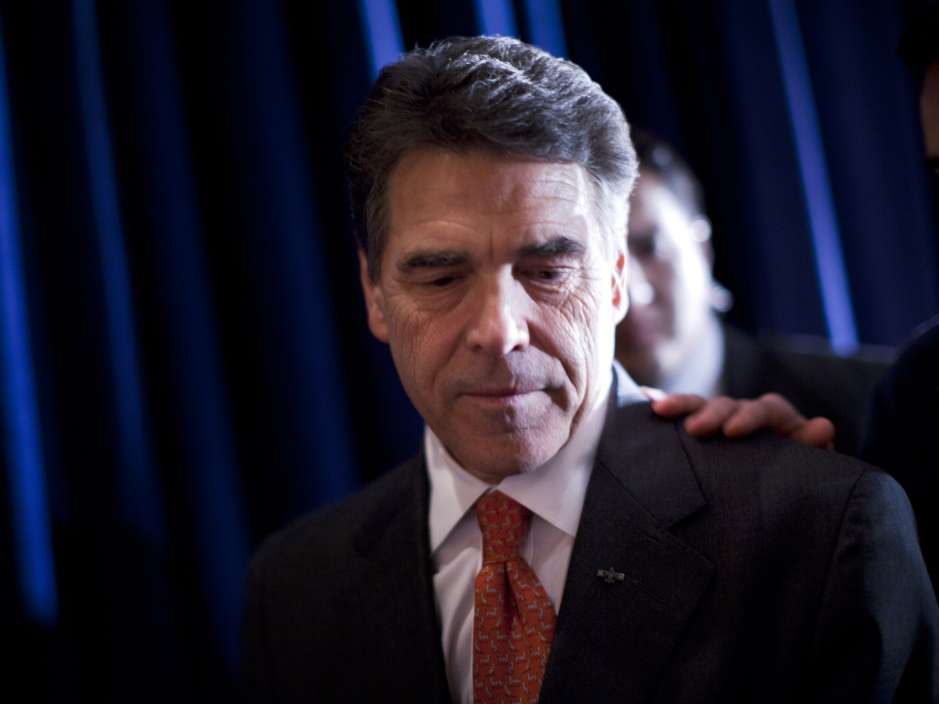 Perry's missive hinted that he plans to skip New Hampshire's primary next week and focus on the vote in South Carolina later this month. On Wednesday, he called Iowa "quirky" and said he was confident he'd do well in South Carolina where voters share his values.

Former House Speaker Newt Gingrich gave every indication that he, too, would soldier on, but his 13 percent showing barely outpaced Perry's 10 percent and Bachmann's 5 percent. By contrast, front-runners Romney and former Pennsylvania Sen. Rick Santorum each pulled 25 percent of the vote, while maverick Texas Rep. Ron Paul finished strong with 21 percent.

"The Iowa caucus thing is like a game show," said Susan Drucker, a political science professor at New York's Hofstra University. "Last night, Santorum had his Susan Boyle moment and a few others got voted off."

Drucker said the caucuses "shook up and reinvigorated the field."

With Bachmann out of the race and Perry's fate still uncertain, the spoils could go to Santorum, who would consolidate the evangelical vote and then would need to broaden his appeal, according to Allan Louden, a professor of political communications at Wake Forest University in North Carolina. 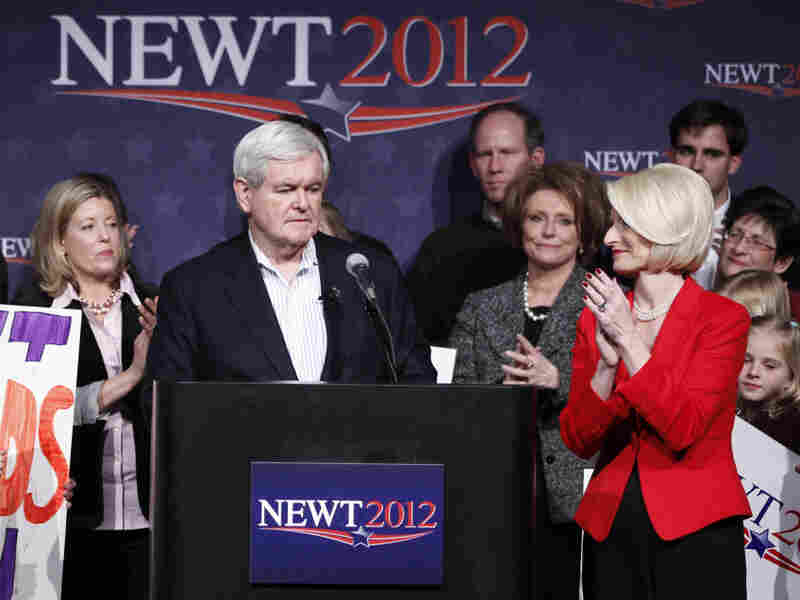 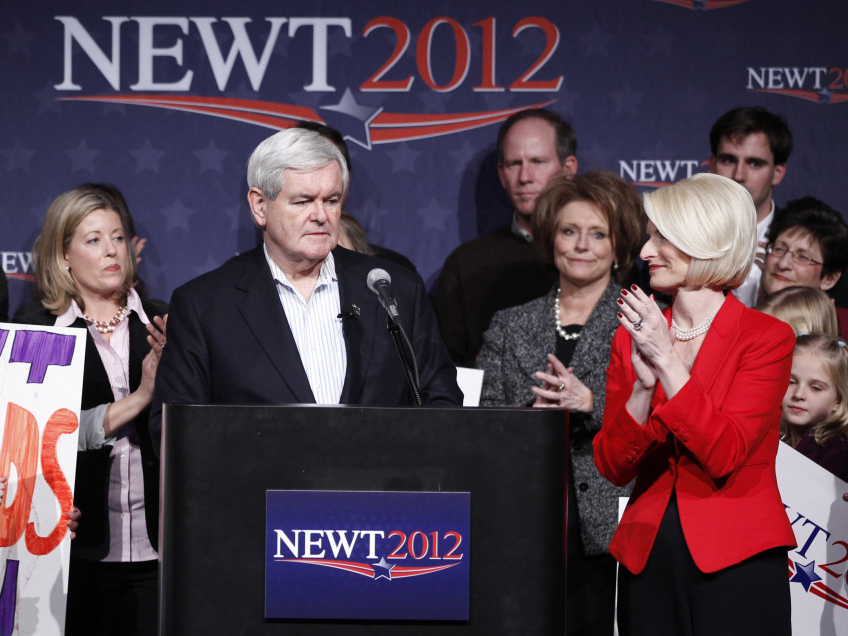 As late as Tuesday night, as the ballots were still being counted, Bachmann gave no public indication that she was thinking of dropping out. In a speech, she referred to herself as the "true conservative who can and who will defeat Barack Obama in 2012."

But behind the scenes, the first signs that she might quit the race were apparent. Campaign manager Keith Nahigian told The Associated Press that he could not say with certainty whether the campaign would continue. By Wednesday morning, the AP was quoting a top Bachmann official as saying the candidate was canceling a trip to South Carolina, which holds its primary later this month.

"She's out of resources," Louden said.

He said Bachmann, who briefly looked like a possible front-runner after garnering the support of evangelicals with her ultra-conservative message, ultimately suffered from overexposure.

"Voters heard the same lines over and over; she was so on-message as to not have depth," Louden said.

Gingrich's campaign, meanwhile, was comparing his fourth-place finish to Sen. John McCain's 2008 Iowa showing, in which he finished fourth but went on to become the party's nominee.

The key difference, Louden noted, is that McCain didn't even run in Iowa.

Appearing before his supporters in Des Moines, Gingrich congratulated Santorum and praised him for running what Gingrich called a "great, positive campaign." He also congratulated Paul for having done well, even as he criticized the Texas congressman for what he called "stunningly dangerous" positions on foreign policy.

Listen To A Special Podcast

Gingrich was less charitable with the front-running former Massachusetts governor.

In a slap at Romney, he said he is confident that America wants "a Reagan conservative" who has helped change Washington, instead of a "Massachusetts moderate" who stands for more of the same. In a reference to Romney and his super PAC-supported attack ads, Gingrich vowed not to run "30-second gotchas" but said he reserved the right "to tell the truth."

The negative ads definitely worked against Gingrich — but so did questions about his character and ability.

"There's an endless supply of ways to go after Newt," Louden said. "And then there's this residual leadership question," he added, referencing Gingrich's time as House speaker in the 1990s. "It's one thing to be the rabble-rouser. It's quite another thing to be the leader."

But Hofstra's Drucker thinks Gingrich is still very much in the race.

"I think Newt Gingrich is a story waiting to be written," she said. "There's a consensus that we haven't seen the real Gingrich yet, and I think Iowa may have unleashed him."

In New Hampshire on Wednesday, Gingrich wasted no time attacking Romney, who picked up an endorsement from McCain.

Romney, Gingrich said, was once an independent who repudiated Reagan-Bush policies, voted for "liberal" Paul Tsongas in 1993 and "ran to the left of Teddy Kennedy" in a Senate race.

Meanwhile, former Utah Gov. Jon Huntsman, who did not contest in Iowa, nonetheless took 1 percent of the vote. Huntsman had his sights set instead on New Hampshire, urging voters there to "upend conventional wisdom" by handing him a win on Jan. 10.