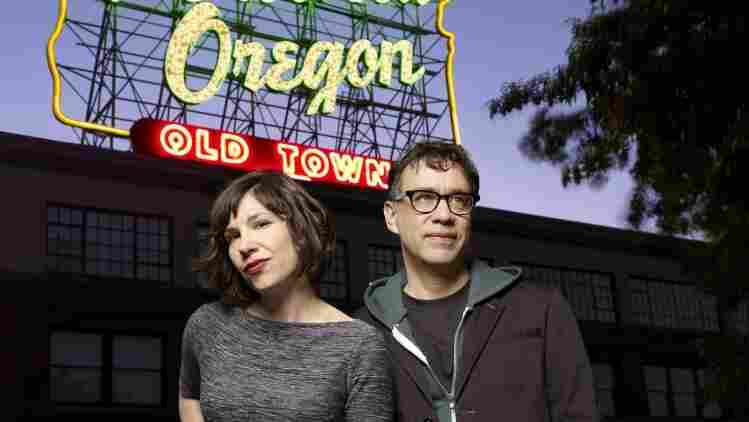 Carrie Brownstein and Fred Armisen film their sketch-comedy show Portlandia in the summer, when Armisen is on hiatus from Saturday Night Live. During the rest of the year, they communicate through constant text messages, says Armisen. Chris Hornbecker/IFC hide caption 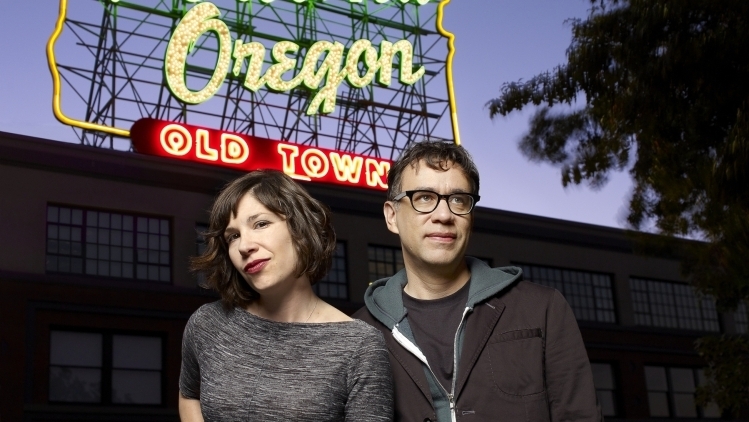 Carrie Brownstein and Fred Armisen film their sketch-comedy show Portlandia in the summer, when Armisen is on hiatus from Saturday Night Live. During the rest of the year, they communicate through constant text messages, says Armisen.

"We would email a link ... to our friends, but they were mostly for us," says Brownstein. "It was very understated and silly, and we were just sort of reveling in the absurd."

But the videos began to attract viewers outside of their circle of friends. Soon, Brownstein and Armisen started putting them on a website they created called ThunderAnt. They also began thinking about doing something bigger.

The result — a sketch-comedy show called Portlandia — is now entering its second season on IFC. The show pairs Saturday Night Live's Armisen with Brownstein, a veteran of the band Sleater-Kinney, in a series of sketches making fun of Portland, Ore.

Why Portland? Brownstein says it's because of her hometown's "incessant optimism." 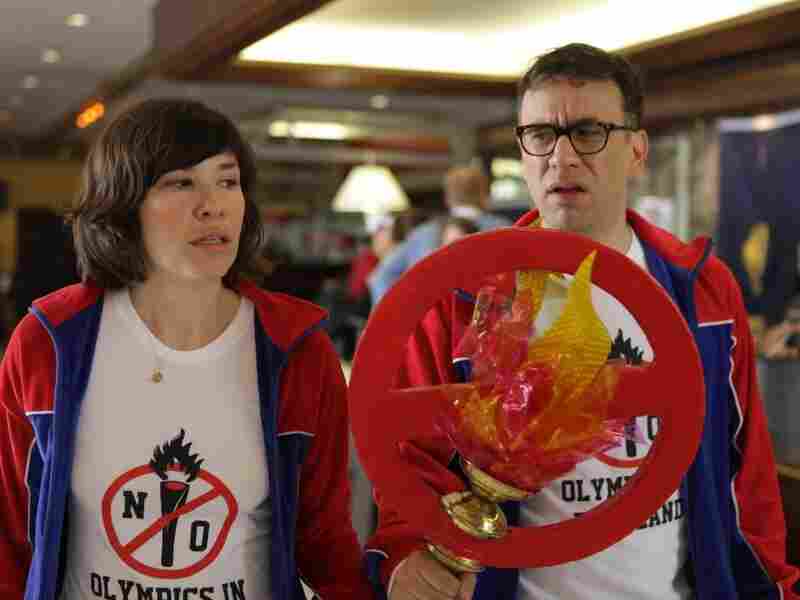 In one episode of Portlandia, Brownstein and Armisen started a grass-roots campaign to prevent the Olympics from ever coming to Portland. IFC hide caption 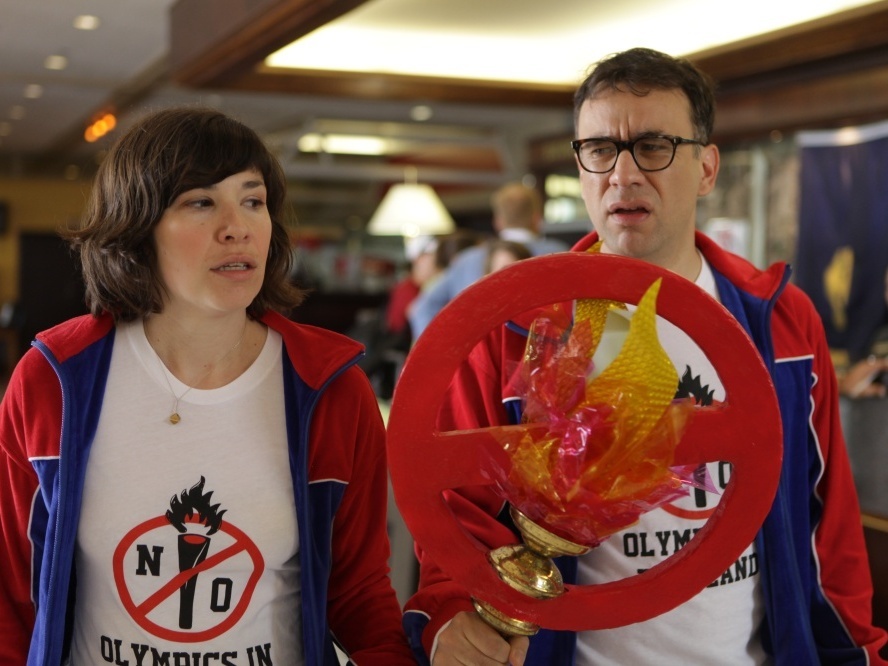 In one episode of Portlandia, Brownstein and Armisen started a grass-roots campaign to prevent the Olympics from ever coming to Portland.

"There's a lot of other cities like Portland across the U.S., where people create these curated niche lives for themselves and they feel very special," she tells Fresh Air's Terry Gross. "Portland, I think, is a city that feels very good about itself. But it's very sensitive, and people go to extreme measures to show how nice they are."

Portlandia makes fun — lightly — of Portland prototypes like freegans, local foodies and feminist bookstore owners, played in the show by the wig-wearing Armisen and Brownstein. The two explain that they based their bookstore sketch on an actual feminist bookstore in Portland called In Other Words, which contains a long list of rules on the wall for customers to follow.

"I liked how anti-customer it was," says Armisen. "But it's a store. They want you to buy books. ... So we thought, 'Well, what would the people who work there be like?' "

The resulting sketch features Armisen and Brownstein trying to enlighten others about feminism — even when it's completely unwarranted. They film inside an actual Portland feminist bookstore. And the mockery is gentle and affectionate enough, says Brownstein, that the store's staff don't mind their on-screen representations.

"The women and men who volunteer at that bookstore have a sense of humor, so we feel OK," she says.

"I think a lot of what we celebrate on Portlandia is the fact that it's the inverse of the norm," says Brownstein. "All of the stuff that makes people different, that's the stuff that's celebrated. If you're normal — if you don't have anything wrong with you — then forget it, it's no fun."

On the feminist bookstore in Portland where they shot scenes

Brownstein: "A bookstore like that you think would be highly inclusive. But as we find with many of the characters on the show, sometimes the things that claim to be the most inclusive have all these esoteric rules to follow — in order to be part of that group — that it becomes so alienating or excluding."

Armisen: "I never got one."

Brownstein: "Telling people about tattoos is worse than telling people about your dreams. I have three tattoos, but I will only tell you about one of them. I was in this band for many years called Sleater-Kinney and we have an album called Dig Me Out, and I have those words tattooed on my side — like on my rib cage. Very painful spot to get a tattoo, it turns out."

On meeting someone who has a tattoo of you

Brownstein: "The reaction is to be flattered. You're thinking, 'That is a level of commitment that I've never made to anyone.' And you've made that to me, and we're strangers. So there's a real disconnect there. You are grateful but also a little weirded out. And you're thinking, 'Oh, that picture. That version of me.'

Armisen: "For me, it's like a dreamy, solid place. I feel very safe there. I feel like all the buildings are all really well-built. And it's also overcast. So it's just nice walking around in a jacket and nice, thick shoes."

On being a rock musician

Brownstein: "It wasn't something that I thought about. I wanted to be an entertainer and a performer. I was always drawn to that as a means of escape and a means of accessing feelings or trying out emotions or experiencing situations that would make me a little less vulnerable. ... I think once I discovered guitar and punk music, that became the vehicle for what I wanted to say. I knew I wanted to be onstage, but it didn't become specific until I was 15 or 16."

On returning to rock after Sleater-Kinney stopped performing

Brownstein: "When Wild Flag played our first show in the fall of 2010, when I stood on stage, I realized I had not stood on stage in four years — and I almost fainted from fear. I put that guitar away after Sleater-Kinney's last show, which was in August of 2006, and I just did not want to pick it up. This sounds melodramatic, but it was almost like having a little urn. Like, here's this thing that embodies something that doesn't exist anymore.

"For me, music needs to have an urgency to it. I need to want it. I need to not take it for granted. So I had to put it away so I could rediscover it. I ended up writing for All Songs Considered, which is of course an NPR show and blog, and it was actually through writing about music and being engaged constantly with a really great community of listeners and readers of the blog that I was writing, that I started wanting to participate in music again."