Accessibility links
Bahrain: The Revolution That Wasn't Bahrain put down an uprising and said it would introduce changes. But so far, little has changed in a country where Shiite Muslims make up most of the population but have very little power. 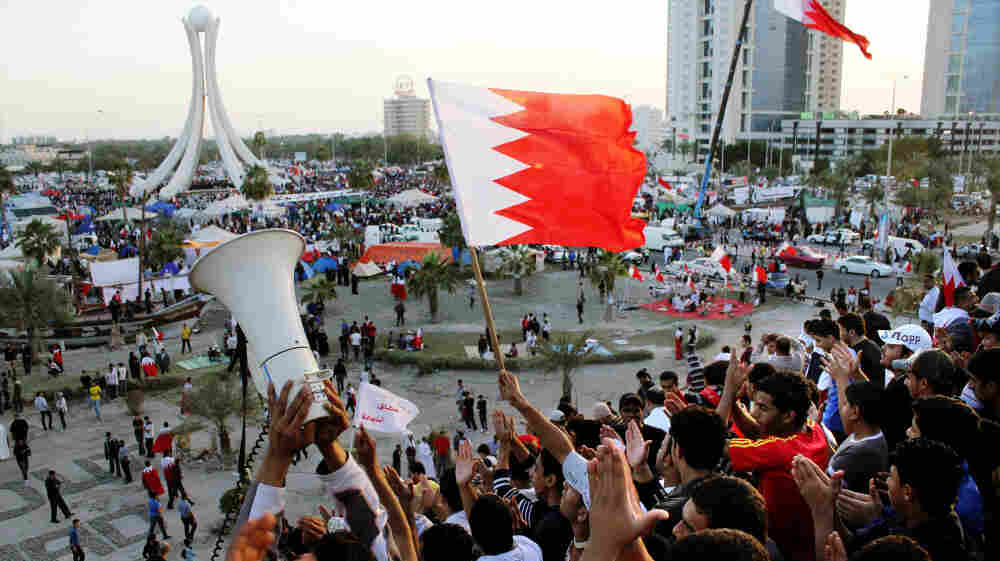 Bahrain is the one Arab country where the government has suppressed a major uprising. Here, protesters wave flags at the Pearl Roundabout in the capital Manama on Feb. 20, 2011, when the demonstrations were at their peak. John Moore/Getty Images hide caption 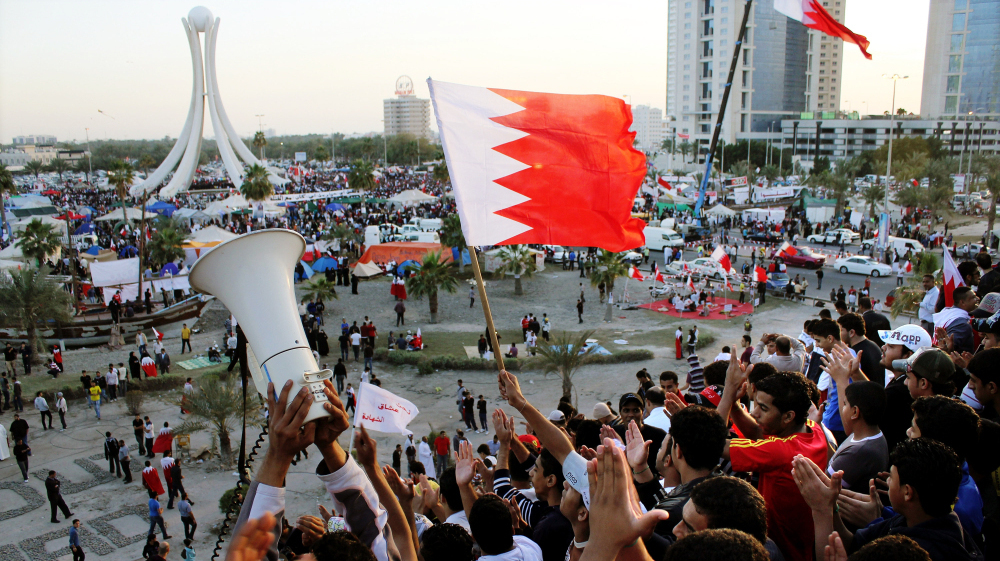 Bahrain is the one Arab country where the government has suppressed a major uprising. Here, protesters wave flags at the Pearl Roundabout in the capital Manama on Feb. 20, 2011, when the demonstrations were at their peak.

Arab revolts against secular leaders have been much more successful over the past year than those against monarchs. The one monarchy that faced a serious threat was the tiny Persian Gulf island of Bahrain. But after weeks of protests, troops from Saudi Arabia rolled into the country, the Bahraini regime imposed martial law, and a government crackdown followed. Kelly McEvers made several trips to Bahrain this past year and filed this report as part of NPR's series looking at the Arab Spring and where it stands today.

Bahrain's uprising didn't get quite as much attention as some of the others in the Arab world last year. But it was one of the first, beginning on Feb. 14.

One man, who has been in and out of jail since then and could only talk to me while hunkered down in his car, was there.

"I remember the 14 February night — I cannot forget this night. Really I cannot forget," says the man, who asked not to be named. "Even my wife, she was telling me you'll be crazy. At the end, you will be crazy. Nothing will happen. A few people will protest and they will crush them and that's all."

No, he told his wife. This time it's different.

Bahrainis had protested before, mainly about the fact that the country's majority Shiites remain poor and disenfranchised by the Sunni monarchy. But they'd never protested like this.

At first the protesters asked for things like an elected Parliament, a new constitution. But then when demonstrators started getting killed, tens of thousands of Bahrainis converged on a place called the Pearl Roundabout to call for the fall of the ruling Al Khalifa family.

Bahrain State TV called protesters traitors and agents of Iran, which is nearby and also has a Shiite majority.

In Bahrain, pro-government thugs attacked protesters, and protesters fought back. Just one month into the uprising, Bahrain's ruling family authorized some 1,500 troops from Saudi Arabia and the United Arab Emirates to enter the country.

Helicopters circled overhead as authorities cleared the Pearl Roundabout of all protesters. The protesters were never allowed back. 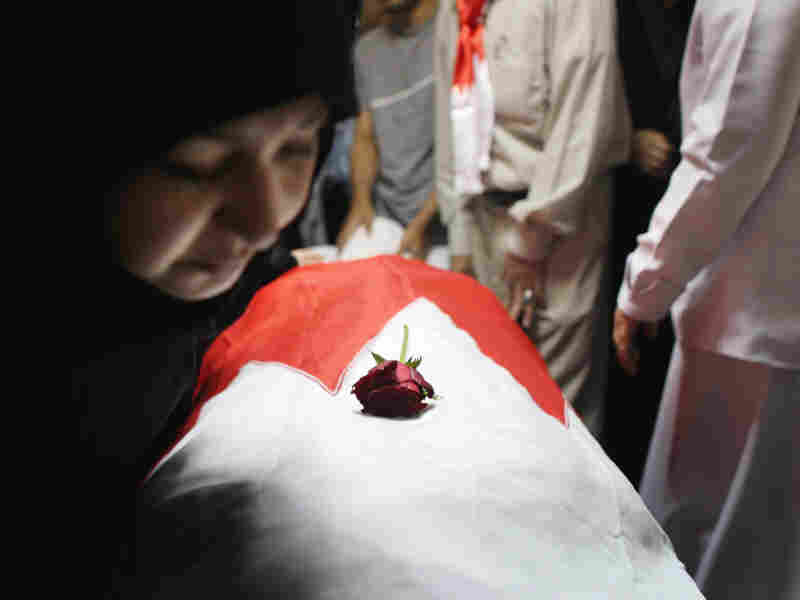 An independent commission found that the Bahrain security forces used excessive force and tortured some of those detained. Here, family members look upon the body of protester Abdul Ridha Mohammed, who was shot in the head and died of his wounds on Feb. 21, 2011. John Moore/Getty Images hide caption 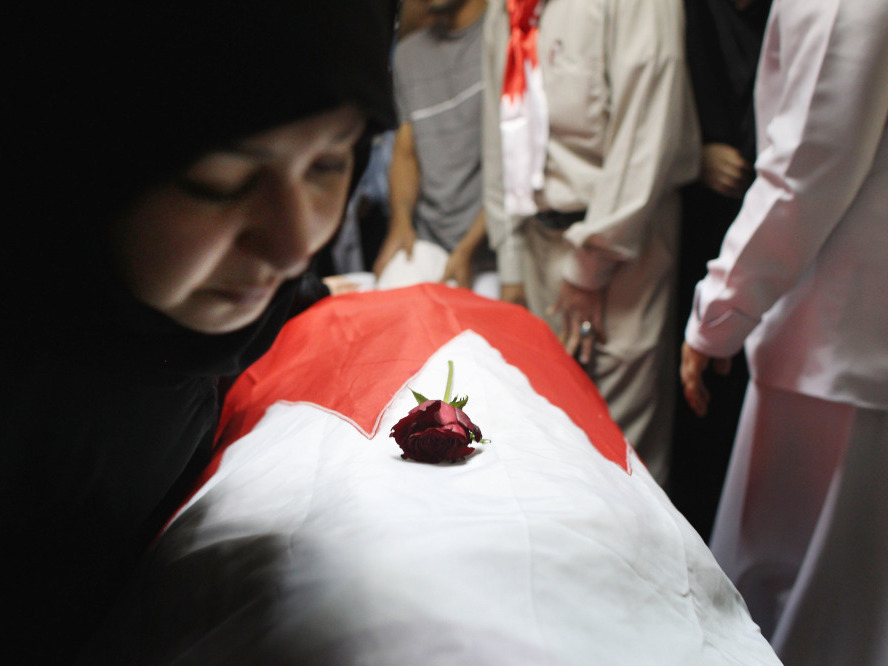 An independent commission found that the Bahrain security forces used excessive force and tortured some of those detained. Here, family members look upon the body of protester Abdul Ridha Mohammed, who was shot in the head and died of his wounds on Feb. 21, 2011.

And so Bahrain became the one Arab country whose uprising was definitively put down. One reason, argues Toby Jones, a professor of Middle East history at Rutgers University, is that the United States and its allies wanted it that way.

For all America's talk during the Arab Spring about supporting those who seek freedom, Jones says, Bahrain was different.

"If there is a place globally where there is not just distance but a huge gap between American interests and American values, it's in the Persian Gulf," Jones says. "And its epicenter is in Bahrain. Bahrain is ground zero for the Arab Spring in the Persian Gulf. And the United States has chosen sides. It has decided that it wants to see the Bahraini regime survive and endure. And that's important not only for the American relationship with Bahrain but for Saudi Arabia."

The U.S. Navy's 5th Fleet is based in Bahrain, giving the U.S. a major presence that has only increased in significance following the U.S. withdrawal of forces from Iraq.

In addition, Saudi Arabia didn't want protests in its own backyard, Jones says. And it didn't want a Shiite-led uprising to encourage its archrival, Shiite-dominated Iran.

Bahrain's uprising was suppressed in a harsh crackdown. Thousands of people were rounded up, detained, and sometimes tortured. Two of those detained were elected members of Parliament. Others were doctors who treated protesters, journalists who wrote about them, and lawyers who defended them. Several people died while in custody.

After The Revolt, An Investigation

Eventually, King Hamad bin Isa Al Khalifa commissioned a group of international jurists to investigate. The commission recently issued its findings at one of the king's palaces.

Nigel Rodley, a human-rights lawyer who served on the commission, says the group didn't have enough time to discover who ordered the crackdown. But it was clear the army, police and intelligence services were all using the same sinister tactics.

"They were all using the same methods of apprehension, detention, ill treatment, and so on, which suggested a policy across different branches of government," he said.

For a moment, activists in Bahrain thought these findings might help revive their revolution. But while committees and commissions have been formed to implement some of the report's recommendations, no single high-ranking official has been held accountable for the deaths and the torture.

Back during the protests, Sadiq Abdullah, a doctor, was interviewed by Al-Jazeera about protesters who had been shot by security forces.

He eventually was called in for questioning by the intelligence service. Three months later and 40 pounds lighter, the doctor was released, but he still faces charges.

He and his wife, Nidhal, recently took me to their private clinic, in a building that houses a dozen or so other clinics.

"Everyone in this building was in jail," Nidhal said.

Sadiq used to be the only doctor in Bahrain who could do kidney transplants. Now he has been fired from his position at the government hospital. One of his students does the transplants.

And there are 98 people on the waiting list. Sadiq is furious at a government that would deprive its people of such care. Still, he has a lot to lose here in Bahrain. At the clinic he can earn in one day what he made in a month at the government hospital.

The United States has chosen sides. It has decided that it wants to see the Bahraini regime survive and endure. And that's important not only for the American relationship with Bahrain but for Saudi Arabia.

In fact, Sadiq and Nidhal are talking about expanding.

"We have to think of other options," Sadiq said, noting that it could include performing private kidney transplants

This is another way Bahrain differs from the other Arab uprisings. In Bahrain, the wall of fear hasn't been broken. People realize they have a lot to lose.

Now, few public gatherings are allowed in Bahrain. Funerals are one of the exceptions, like a recent procession for a man who witnesses say was killed when riot police smashed into his car.

As the man was buried, people started chanting slogans against the regime. The riot police approached. A few young protesters threw rocks. The police responded with rubber bullets, sound grenades and tear gas.

That's all that was left of Bahrain's uprising.

The monument at the Pearl Roundabout has been demolished. All roads to it are blocked by armored vehicles. Protests are stopped before they make it out of the villages.

This is what's happening in villages all over Bahrain. But each one is contained and individual.

There's no large movement as was the case back in February and March. And from what a lot of people say, there's not going to be one anytime soon.

The riot police eventually fell back, protesters went back into their houses, and the village started to put itself back together.

For now, the uprising appears to be over. As the sun goes down, it's time for evening prayer. There is garbage on the streets, but somebody will come and clean it up. And then, life will get back to normal. Just like nothing ever happened.

The audio and the original text version of this story said that funerals are the only public gatherings now permitted in Bahrain. Some demonstrations have been permitted in recent months, however, applications for such gatherings are often denied.