Accessibility links
Attacking Super PACs Fueled By Anonymous Donors After Iowa, we know how much power the new presidential super PACs can exert. But we won't know who is financing them until the end of January. 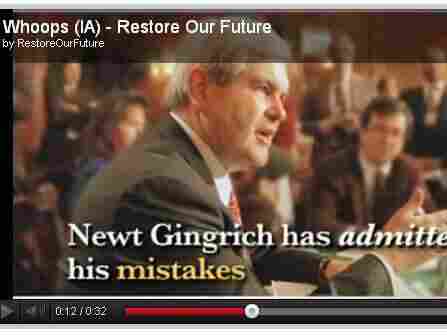 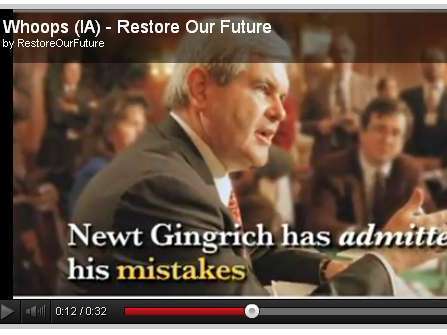 A screen grab from an anti-Newt Gingrich ad from the pro-Mitt Romney super PAC Restore Our Future.

A major factor in the Iowa outcome was likely a barrage of attack ads against one-time front-runner Newt Gingrich. The ads came from a super PAC supporting Mitt Romney, who won Tuesday's caucuses in the state.

And one of the super PACs — Restore Our Future — which supports former Massachusetts governor Romney, blanketed Iowa airwaves with attack ads against Gingrich in the weeks before the caucuses.

Restore Our Future spent $4 million on the ads, meaning the average Iowa TV viewer would have seen them three dozen times a week in recent weeks.

They are a major reason Gingrich, the former House speaker, plummeted from first place in the polls to a fourth-place finish in Iowa.

The pro-Romney super PAC Restore Our Future paid for this and several other ads that aired in Iowa before that state's caucuses, attacking GOP candidate Newt Gingrich.

Restore Our Future is run by former campaign aides to Romney. But, officially, it's not part of his presidential operation.

All of the major candidates have super PACs. They raise whatever money they can get, no limits required, from corporations and wealthy individuals.

But there hasn't been any disclosure of donors since last July. And there won't be any until the end of January. By that time, four states will have decided their choice for the GOP presidential nominee.

"We have the Iowa caucuses, we have the New Hampshire, South Carolina and Florida primaries, and we won't know who is donating to the organizations that were trying to knock those other candidates out," says Bill Allison, editorial director for the Sunlight Foundation, a group that promotes transparency in politics.

The super PACs stay below the radar by cherry-picking disclosure requirements from the federal election laws.

We're really turning the clock back. We will have more undisclosed money used in the presidential election than we have seen since the elections prior to Watergate.

It's absolutely legal. But not everyone in the super-PAC world agrees that the secrecy is a good thing.

Washington lawyer Robert Kelner, who advises super PACs and big donors, says that for people giving the money, the timing of disclosure is immaterial.

"They have already decided, when they chose to make the contribution to a super PAC, that they're comfortable with their name being in the public record," says Kelner.

As for the super PACs, he says they don't benefit from temporarily hiding a controversial donor.

"If it's that big an issue, then maybe the super PAC doesn't want that particular contribution in the first place," Kelner says.

And while candidates are usually desperate for every regulated contribution they can get, Kelner says the super PACs tend to be well-funded.

"They can make nuanced choices as to which contributions they want to accept and which ones they don't," Kelner explains.

No one at Restore Our Future was willing to speak on the record Wednesday. But C. Edmund Wright was. He's the spokesman for Winning Our Future, a super PAC run by former aides to Gingrich.

Wright says transparency would have made Restore Our Future — the pro-Romney super PAC — tone down its anti-Gingrich attacks in Iowa.

"Just common sense tells me that they would've given a lot less money and maybe not been quite as negative," says Wright.

Then again, Gingrich has, essentially, now shed his nice-guy persona.

On Wednesday, the Winning Our Future website featured an old ad from John McCain's 2008 campaign — "A Tale of Two Mitts" — attacking Romney. The ad took on particular relevance on the day McCain endorsed Romney's bid for the presidency.

Winning Our Future links to this ad on its website, attacking Mitt Romney. It's an ad created by the John McCain presidential campaign in 2008, when McCain was running against Romney for the GOP nomination.

It's a message that Winning Our Future would like to repeat with its own ads financed by its own secret donors.

Anthony Corrado, a political science professor at Maine's Colby College who has spent years studying the flow of political money, says Iowa gives just a hint of what's to come.

"We're really turning the clock back," he says. "We will have more undisclosed money used in the presidential election than we have seen since the elections prior to Watergate."

And, as in Iowa, the undisclosed money stands ready to deliver the harshest attacks.