Accessibility links
Sinking Ship? Saving The Historic Kalakala Ferry When it debuted in 1935, the Kalakala was a Seattle icon. These days, the art deco ferryboat is better known for its fight to survive both on water and in local memory. 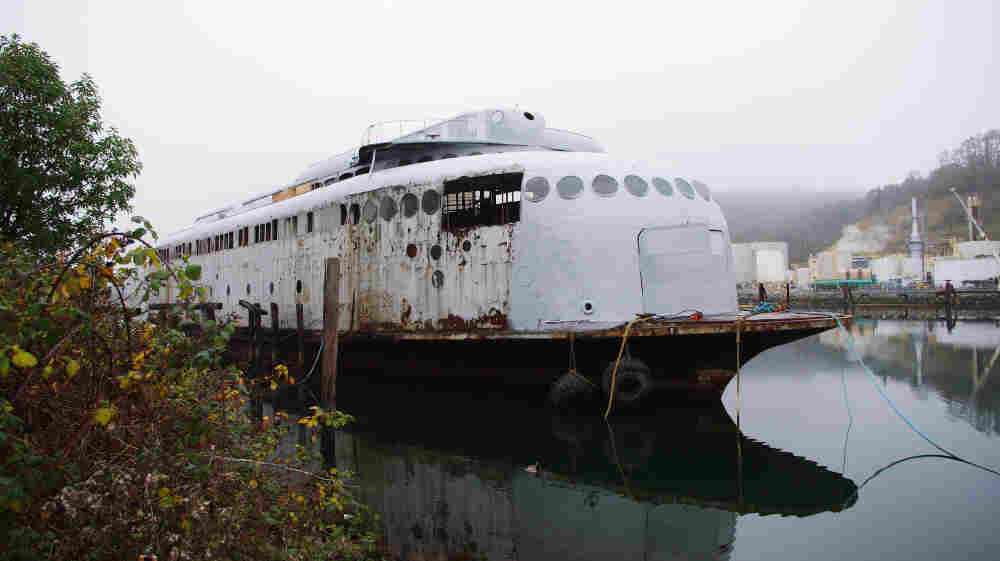 Not Dead Yet: On July 3, 1935, the Kalakala started daily ferry service between Seattle and Bremerton, Wash. Today, it sits unused in a nearby Tacoma dock. Martin Kaste/NPR hide caption

There's an old joke: The two happiest days in a man's life are the day he buys a boat and the day he sells it.

That's certainly been true for the owners of the Kalakala, a historic art deco ferry that currently resides in Puget Sound. Launched in 1935, the vessel's trials and tribulations have become the stuff of legend in Seattle.

First, it was an icon; a steel-bullet-shaped ship with round portholes that earned itself a mention in the Bing Crosby and Andrews Sisters song "Black Ball Ferry Line." You can still find pictures of it cruising past the Space Needle, looking like it belongs to Buck Rogers. 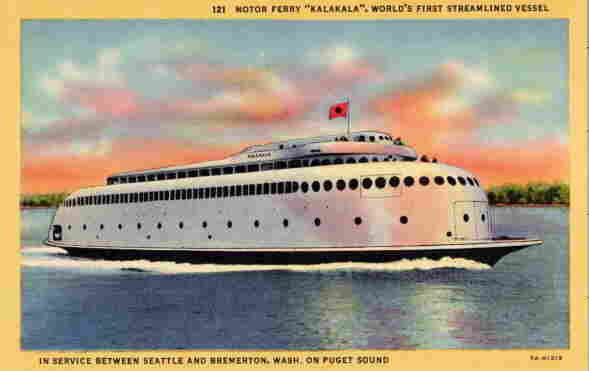 When it debuted in 1935, the Kalakala was the fastest and largest ferry on Puget Sound. Universal Images Group/Getty Images hide caption 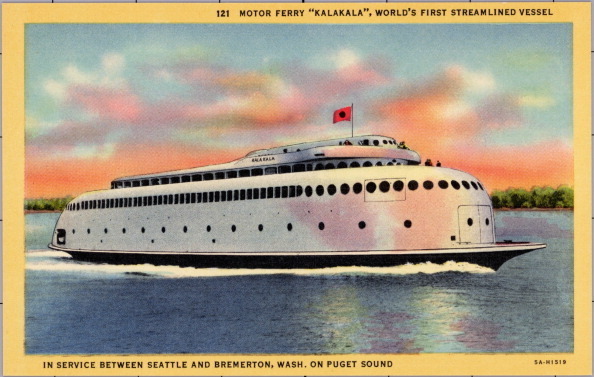 When it debuted in 1935, the Kalakala was the fastest and largest ferry on Puget Sound.

Steve Rodrigues has spent eight years trying to restore the Kalakala, and calling him an enthusiast would be an understatement.

"It was silver; the sun made her glow in the light," he says. "Nothing exists like the Kalakala in the world. It is art deco. There is nothing that ever followed that ... looked like it again."

But that futuristic beauty has faded. Today, the Kalakala is tied up in an industrial waterway near Tacoma, Wash. Under the leaden winter skies — despite the efforts of Rodrigues and some volunteers — the rust is what most stands out.

"We have kept her afloat," Rodrigues says. "We have worked with the government and made proposals for waterfront moorage for the Kalakala and preserving it to her glory and sharing it with the community. But it failed."

Still, Rodrigues isn't the first to fail. He bought the Kalakala at a bankruptcy auction from the previous group of would-be restorers. For the past decade, the old ferry has been something of a sad joke around Puget Sound, getting evicted from one potential home after another. Some say it's not worth saving; it may have looked cool, but it was hard to maneuver and kept running into things.

Now, the Kalakala has overstayed its welcome in Tacoma. Last year, the Coast Guard set a deadline for Rodrigues to repair the boat's hull and arrange for it to be towed. They've also declared it a "hazard to navigation."

Vintage Newsreel: The Kalakala In Its Prime

"It has to go," says Coast Guard spokeswoman Regina Caffrey. "If the Kalakala sinks, it would block the entirety of the waterway, and it could impact up to $23 million worth of commerce in one month."

But Rodrigues denies that the Kalakala is a hazard. He gets angry at the very idea, accusing the media of conspiring with the government to smear the ferry's reputation.

Right before the Coast Guard's December 2011 deadline, Rodrigues announced he'd sold the ferry for $1 to an "anonymous billionaire." He insists the mysterious patron has committed to spending the necessary millions for a proper restoration.

Many in Seattle have grown to be skeptical of such Kalakala comeback announcements, but Cheryl DeGroot of Tacoma is still sentimental. DeGroot grew up riding the Kalakala in the '50s, and then, after the ferry's retirement, she stumbled across it again in the '70s in Kodiak, Alaska. It had been towed there to house a fish cannery, and DeGroot got a job onboard shelling shrimp.

"I'm getting some pictures today, because it's so special," she says on a recent visit to the Tacoma dock. "It looks better than I thought it would, actually. Not too bad — it's still floating!"

Despite all the setbacks, the Kalakala does seem to have a tendency to stay afloat.