Accessibility links
Can Construction Help Build The Recovery? Of all the good news in the December unemployment report, perhaps the most encouraging sign for the 2012 labor market was the increase in construction jobs. That sector has lost more than 2 million jobs as the housing market imploded, but increases in construction could be a cautious sign of a turnaround, analysts say.

Can Construction Help Build The Recovery?

Can Construction Help Build The Recovery? 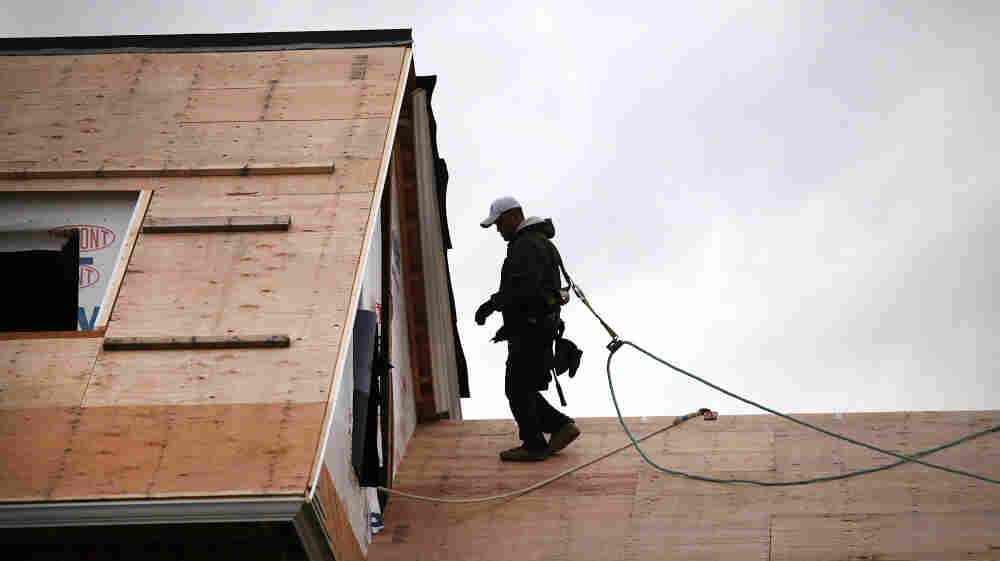 A construction worker walks on the roof of a newly built home in Westport, Conn. The construction sector, which has been battered by the depressed housing sector, added 17,000 jobs in December. Spencer Platt/Getty Images hide caption

Of all the good news in the December unemployment report, perhaps the most encouraging sign for the 2012 labor market was the increase in construction jobs. That sector has lost more than 2 million jobs as the housing market imploded 5 years ago, but increases in construction hiring and spending could be cautious signs of a turnaround, analysts say.

The number of new jobs exceeded most economists' predictions that about 150,000 jobs would be created. The jobless rate fell to its lowest level in nearly three years, down from a revised 8.7 percent in November.

One reason for December's improvement: Construction companies started hiring again. Last month, employers created 17,000 jobs in the industry that had lost more than 2 million since 2007.

'Any Improvement Is Important'

The Plunge In Construction Jobs

The construction industry has lost more than 2 million jobs since 2007, but added 17,000 in December.

"Housing has been such a drag on the economy that any improvement there is important," says Paul Ballew, chief economist at Nationwide Mutual Insurance Co.

But construction wasn't the only sector that grew. Transportation and warehousing also showed signs of life, with employment bouncing up by 50,200 jobs.

Those sectors did well in part because of warm weather throughout much of the country in December. Another sector that did well was manufacturing; factories added 23,000 jobs.

But economists widely agreed that the good December report reflected a broadly strengthening U.S. economy. Still, the labor market has a long way to go to replace the millions of jobs lost in recent years.

"This is a step in the right direction," said Heidi Shierholz, an economist with the Economic Policy Institute, a liberal research group. However, she noted in a written assessment that "even at December's growth rate, it would still take about seven more years — until around 2019 — to fill the gap and get back to the pre-recession unemployment rate."

On the White House blog, Alan Krueger, chairman of President Obama's Council of Economic Advisers, said the jobs report "provides further evidence that the economy is continuing to heal from the worst economic downturn since the Great Depression."

A Barometer For The Economy

Economist Ballew said the December boost in construction hiring is "a great barometer for the economy," and suggests 2012 may finally bring a long-awaited turnaround in housing.

Employment in residential construction plunged starting five years ago, and has been flat since early 2010. Now construction seems to be stirring back to life — in both the residential and commercial sectors.

The reason for hiring optimism can be found in the most recent Commerce Department data, released earlier this week. That report showed construction spending rose 1.2 percent in November to a seasonally adjusted annual rate of $807.1 billion.

A Jobs Report Worth Celebrating, Cautiously

That was far below the 2006 peak, and only about half the $1.5 trillion that economists would consider a healthy rate. Still, November marked the third time in four months that spending rose, largely because of increased residential construction. Builders started more homes in November than at any time in the previous 19 months, the Commerce Department data showed.

'Climbing Out Of A Hole'

"Several segments of construction appear to be climbing out of a hole," Ken Simonson, the Associated General Contractors of America's chief economist, said in a statement for the trade group.

If construction is finally headed for a rebound, it would be welcome news for the carpenters, bricklayers and others who lost their livelihoods when the housing sector began melting down in January 2007. Since that month, employment in the construction industry has fallen to around 5.5 million jobs from 7.7 million.

Few had predicted such a dramatic slide. Indeed, many younger construction workers had never before experienced a downturn. Before the winter of 2007, home starts had been on a decade-long winning streak.

Prices peaked in mid-2006 and began stalling that autumn. When the crash began in earnest in winter of 2007, many believed it would be relatively short-lived. They expected a normal sector recession — a time when building would slow while the market caught up with the new houses on the market.

In February 2007, Federal Reserve Chairman Ben Bernanke told the House Budget Committee the slowdown in the housing sector "is a concern, but at this point we don't see it as being a broad financial concern or a major factor in assessing the course of the economy."

As it turned out, the housing crisis derailed the U.S. economy for years, and significantly slowed global growth.

So if construction is indeed picking up, it could be a sign that the broader economy may be healing, and that new jobs soon may begin appearing for landscapers, Realtors, furniture salesmen, drapery makers and many others.