Accessibility links
Internet Exiles Stores On Main Street The impending bankruptcy of Kodak and the closure of camera and record stores that had been around for decades offer further proof that more and more goods and services have moved online. Somehow, that doesn't mean we have less stuff. 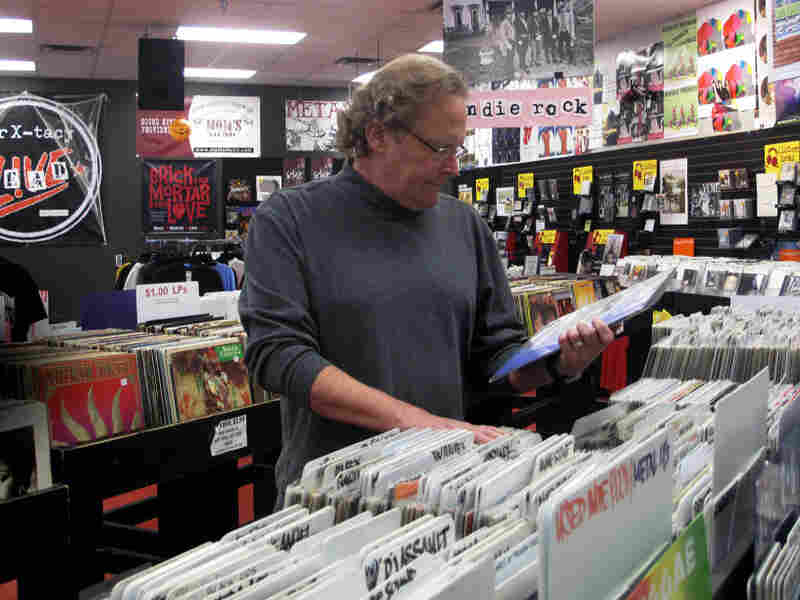 John Timmons, owner of ear X-tacy in Louisville, Ky., closed his record shop after 26 years of business because of the bad economy. Debbie Elliott/NPR hide caption 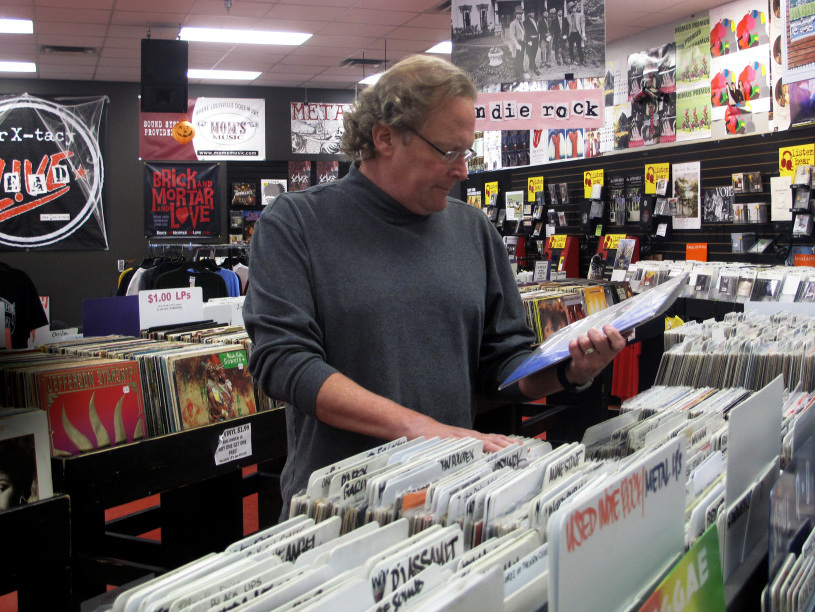 John Timmons, owner of ear X-tacy in Louisville, Ky., closed his record shop after 26 years of business because of the bad economy.

Open any children's book with a scene set downtown and you'll see a picture of basically the same row of shops. There's a bookstore, a pharmacy, a florist, a post office and a bank, and maybe a bakery where the kids can hope for a free cookie.

Nearly all those businesses are under threat from the Internet.

There's nothing new about this. Bookstores have been going under for a couple of decades now. But reports that former corporate giant Eastman Kodak will seek bankruptcy protection serve as a reminder that a multitude of products and just about every kind of transaction is now available digitally.

Kodak's fall was accompanied by news that 60-year-old camera stores and record stores open longer than 30 years were going out of business as well, all citing pressure from the Internet.

There's no doubt that the mix of shops and services that make up the spines of commercial strips and strip malls all across America will continue to change. The question now is what type of Main Street business will come under threat next.

"There are fewer and fewer services that a bank branch does, right up to getting the loans, that can't be done completely online," says Robert Thompson, a professor of popular culture at Syracuse University. "I'm surprised there haven't been more bank branch closures."

Over the years, I've picked up lots of bargains at stores going out of business because of Internet-based competition, such as Borders and Tower Records.

In the case of stores that sell CDs — and, increasingly, books — it's not just the business model of a physical store that's becoming obsolete, but the actual products themselves.

"People are not only buying books and CDs online, but what they're buying online is a digital file," Thompson says.

That's why I was shocked, when I moved to the St. Louis area a couple of years ago, to find myself living in a suburb that still had not one but two record stores.

One of them, Webster Records, specializes in music that appeals to an older crowd, such as classical and Dixieland jazz. The store keeps short hours and there's rarely much foot traffic. It does much of its business selling to collectors by mail order.

But the store couldn't compete on price or wealth of offerings with the likes of Amazon. Webster Records announced Thursday it would shut its doors at the end of this month, after 58 years in business.

I Can Get It For You Wholesale

For Webster Records store manager Jim Lovins, this is not a new experience. For years, he sold stereo and home theater equipment at a store called Hi-Fi Fo-Fum.

That shop, which had been around for decades, closed its doors last year. It was impossible to compete with Internet retailers, Lovins says, because they don't have to shoulder costs such as commissions or heating and air-conditioning display areas.

People might not be able to check out the sound they'll get from speakers they're buying online. On the other hand, they're able to read dozens or hundreds of consumer reviews of each product and, if they don't have to pay for shipping or restocking fees, take little risk auditioning equipment at home.

Not just sales of goods but also plenty of services are migrating online. Some people still don't trust online banking and are nervous about the idea of depositing checks by taking pictures of them with their phones.

But their numbers are diminishing. And no business, it seems, has succeeded for long in pressing the case that the expertise or customer care it provides outweighs the convenience and cost savings of an equivalent Internet service.

Because of the paramount importance of health, pharmacies are hoping customers will continue to rely on the kind of face-to-face help a well-trained human being can offer about matters such as interactions between drugs.

"There's a variety of counseling components that a retail pharmacist provides," says Chrissy Kopple, spokeswoman for the National Association of Chain Drug Stores. "There really isn't a replacement for that interaction on the Internet."

That may be true. But it's the same kind of argument that independent booksellers used to make about how well they knew books and their own customers' tastes.

All of the major retail pharmacists recognize the lure of the Internet themselves. Each now offers its own Web-based prescription-filling service, potentially undercutting its primary business — just as Kodak did by inventing, but failing to prosper from, digital photography.

Not Getting Rid Of Stuff

With the passage of a Maine law in 2009, every state now allows pharmacists to give flu shots. As yet, there's no app for that.

So it's possible that companies that provide services will withstand the Internet onslaught longer than stores that sell goods.

With more and more light media — books and music, photographs and movies and correspondence — going all-digital, however, there will inevitably be fewer storefronts devoted to such interests.

But if downtowns are emptying themselves of certain types of goods, does that mean we'll end up with less stuff at home?

Probably not. Digital is not next to cleanliness. I know plenty of people who sleep next to two phones, a tablet computer and a remote — or three — for the TV.

My friend Breeze Carlile is a professional organizer in Oakland, Calif., helping people get their houses in order, in part, by thinning their possessions. They may have e-readers but they continue to hold onto books, she says — and, often, the boxes they came in.

According to the Self Storage Association, nearly 10 percent of all U.S. households currently rent a storage unit — an increase of nearly two-thirds over the past 15 years.

"My clients have phones and digital cameras to take pictures, and they still print out the photos and never get them into albums," Breeze says. "Nope, people do not have less stuff."

The Death Of The Tangible Is Nigh! (Or Is It?) Share Your Photos Taken On Film Jan. 6, 2012
Economy Mutes A Longtime Louisville Record Shop Nov. 22, 2011
Bye Bye Borders: What The Chain's Closing Means For Bookstores, Authors And You July 19, 2011