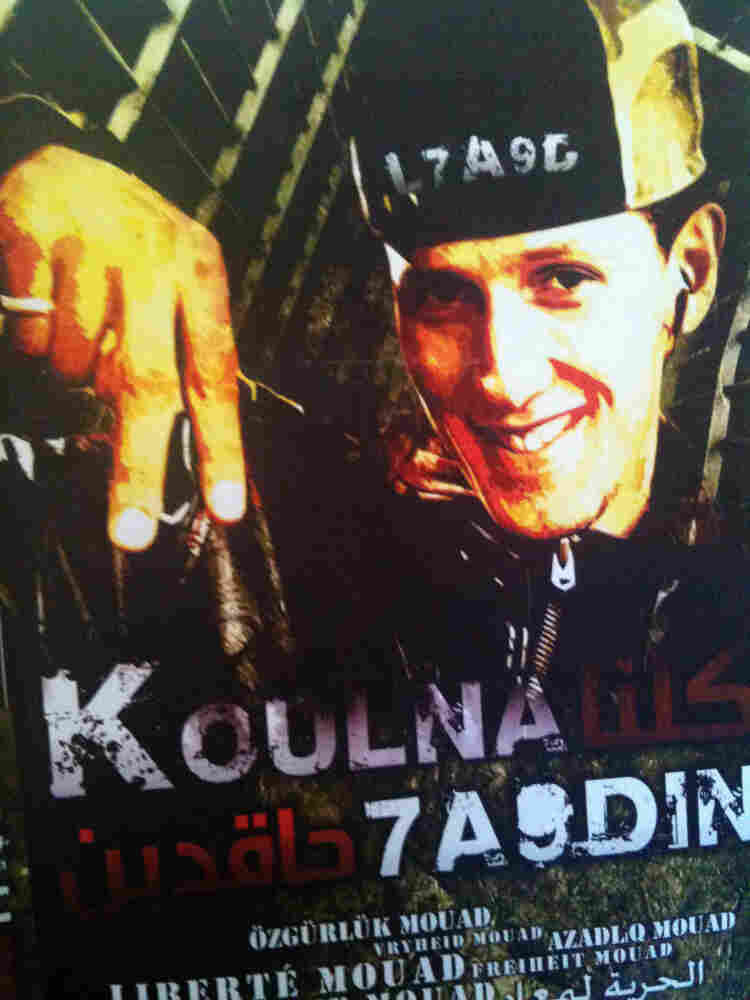 Moroccan rapper Mouad Belrhouate, shown here on an album cover, is commonly known as El-Haqed, or "the defiant one." He's been jailed for four months and is awaiting trial in Casablanca. His supporters say his case shows the limits of recent political changes introduced by King Mohammed VI. Deborah Amos/NPR hide caption 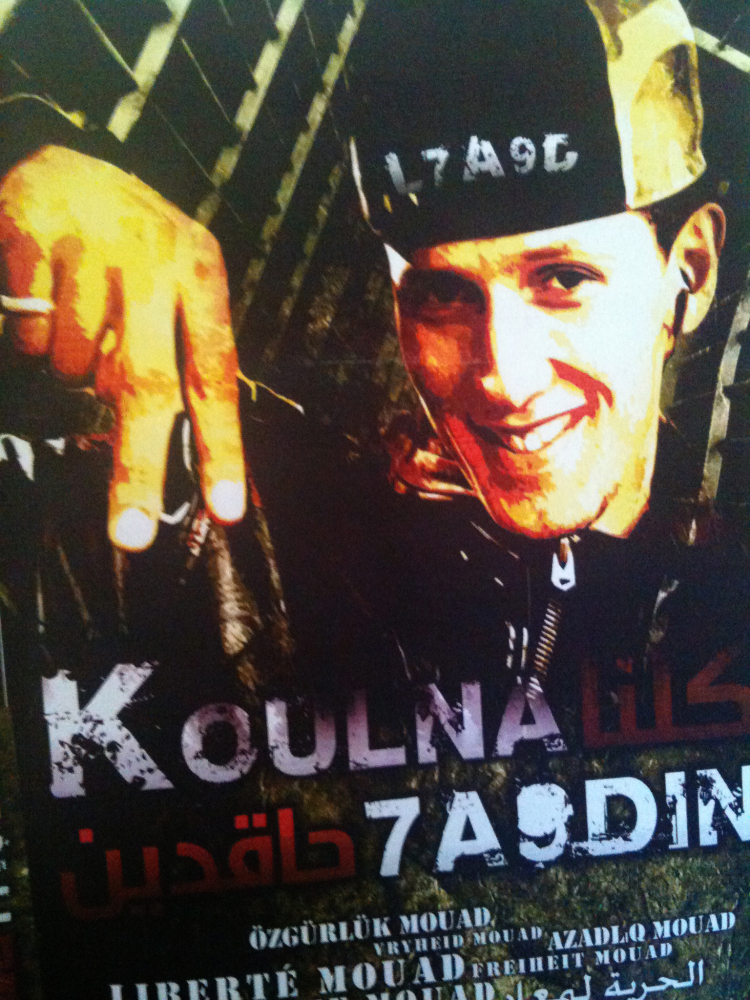 Moroccan rapper Mouad Belrhouate, shown here on an album cover, is commonly known as El-Haqed, or "the defiant one." He's been jailed for four months and is awaiting trial in Casablanca. His supporters say his case shows the limits of recent political changes introduced by King Mohammed VI.

Morocco has been called one of the winners of the Arab Spring. The country's young king, Mohammed VI, offered a new constitution and early elections, taking the steam out of a protest movement that rose up last February.

But the arrest and trial of an artist who writes provocative rap songs show that there seem to be limits to the reforms.

The rap songs of 24-year-old Mouad Belrhouate are popular in Morocco, even more so after the four months he has spent in jail.

He is better known as El-Haqed — "the defiant one" — which describes lyrics explicitly critical of Morocco's social ills and the country's monarch. It's an attitude that also describes the young protesters of the February 20 protest movement. His supporters charge that this trial is an attempt to silence him — and them.

Even his youngest fans come to the courthouse in Casablanca, Morocco, to support him.

Rihab Alame, an 11-year-old girl, knows the words to all his protest songs. She shows up for every court appearance, despite four postponements of Belrhouate's trial.

He was arrested in an unjust way, she says. He did nothing, she continues, but they took him to prison.

The activists of the February 20 movement gather at the courthouse, too. Abdullah Abaakil says the arrest sends a political message. "He writes protest songs, but I don't think he was arrested for that," Abaakil says.

Officially, the rapper's songs have nothing to do with his arrest. He was jailed on an assault charge after a brawl outside his house. Supporters say it was a setup. They add it is unusual that the attorney general of Casablanca is heading up the prosecution team for a simple assault charge. Belrhouate is in jail because he's an activist, says Abaakil.

"He's very popular in his neighborhood. And the regime [doesn't] want to see us as a movement win people's hearts in the poor suburbs in Casablanca," Abaakil says. 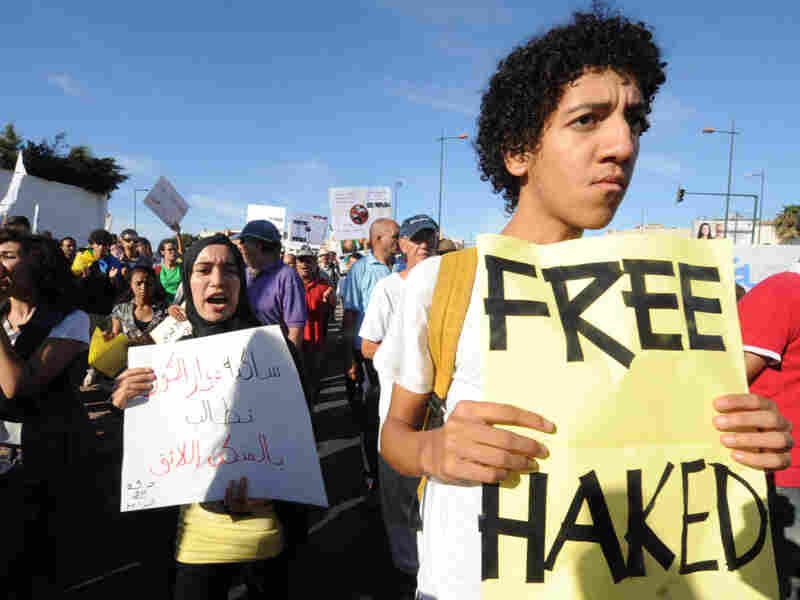 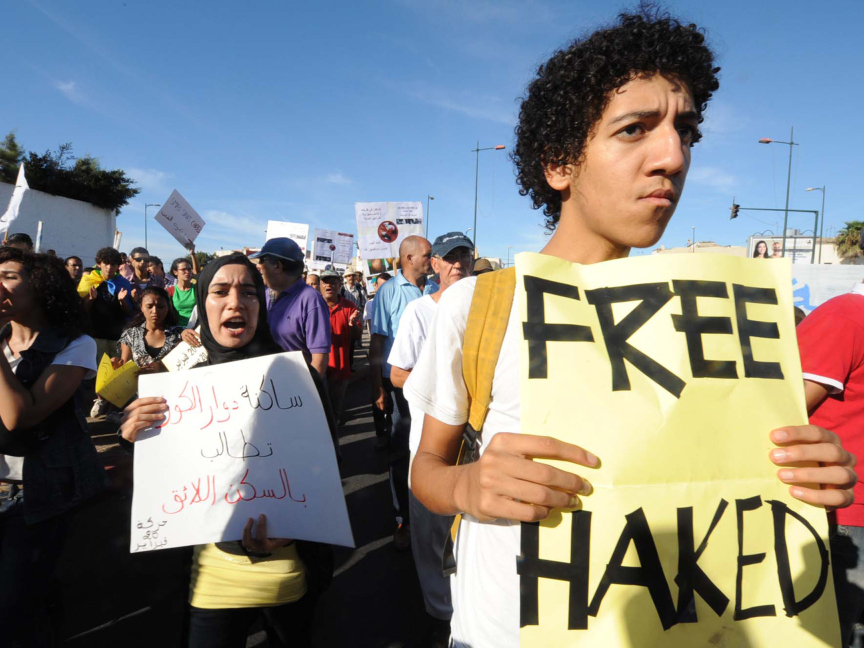 Young protesters in Rabat, Morocco, demand political and social changes along with the release of jailed rapper Mouad Belrhouate on Sept. 11, 2011.

The local media haven't covered the trial, but word has spread, and with each postponement, the crowd of supporters grows larger. "When people went to the streets [on] Feb. 20, they used his songs. He's the image of this movement," says Sophie Hilali, who wears a badge with a picture of the rapper.

The courtroom was packed when Belrhouate, a slight young man surrounded by human-rights lawyers who have volunteered to defend him, was finally brought before the judge. Judges in Morocco are appointed by the king and there's a widespread belief that rulings are not impartial but rather reflect the wishes of the leadership.

That's why there is so much interest in the case, says Karim Tazi, a businessman and political activist.

"This case is a high-profile case. It's a symbolic case. He's only an artist — and they want to silence him," Tazi says.

In a way, this trial is also a test of the power of a protest movement that won concessions from the king after mass demonstrations. Morocco has a new constitution. Elections in November made moderate Islamists the leading party in the government.

That party has promised to revamp Morocco's justice system. Human-rights groups urged the new ministers to investigate the charges against a political rap star.

Tazi says that it's a loss for the regime either way.

"If they free him, he is going to come back and sing again. If they keep him in jail, they are adding fuel to the anger of the movement and bringing the movement back to life, so they are losing anyway," Tazi says.

After another postponement this week, Belrhouate is still in jail — but his songs sell better than ever. With his arrest, the regime has helped create a superstar.