Accessibility links
'Man In The Middle': Between Faith And Politics Tim Goeglein worked as a staffer in the George W. Bush White House for nearly eight years. In his new book, The Man in the Middle, Goeglein describes his tenure and the role of religious faith in politics. 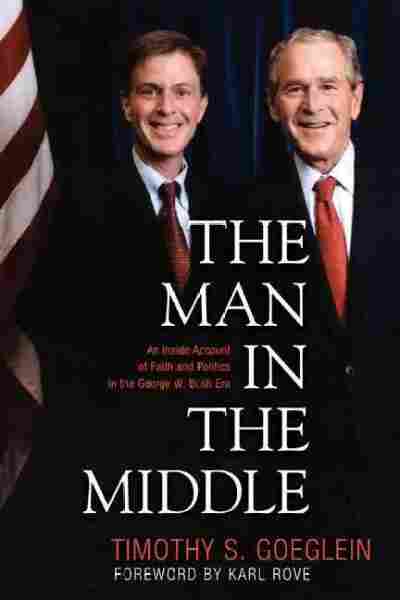 The Man In The Middle

An Inside Account of Faith and Politics in the George W. Bush Era

Title
The Man In The Middle
Subtitle
An Inside Account of Faith and Politics in the George W. Bush Era
Author
Timothy S. Goeglein

Tim Goeglein worked in the George W. Bush White House for eight years, and it was in the Oval Office that the president forgave him.

While working as an aide to Bush, Goeglein repeatedly plagiarized columns he sent to his hometown newspaper under his byline. When his actions were discovered, he went to Bush to apologize, fully expecting to be fired.

"Before I could get barely a few words out," he says, "he looked at me, and he said, 'Tim, grace and mercy are real. I have known grace and mercy in my life, and I'm extending it to you. You're forgiven.' "

Today, Goeglein works for the Focus on the Family Christian ministry. In his new book, The Man in the Middle: An Inside Account of Faith and Politics in the George W. Bush Era, he writes about his experiences in the Bush administration. He tells weekends on All Things Considered host Guy Raz that religion has a vital place in American politics — and has ever since the country was born.

"In the founding discussions and debates, men as elementally different as Alexander Hamilton and Thomas Jefferson — I mean, these people didn't agree on whether we should have a national bank, a national currency and, at one remove, whether we ought to have a constitution," he says, "but they all agreed, categorically, that freedom and liberty came from God, not from government."

Yet the founding fathers themselves were of different faiths. Jefferson is widely believed to have been a deist. John Adams was a Unitarian. Absolutely, Goeglein acknowledges, "but they were all preoccupied with one thing, which was what they called the other side of liberty — the other side of freedom, which was virtue."

"They were terrified of an established church — and they made that very clear," he says.

Goeglein himself believes that faith and government go together, and that the relationship transcends party politics.

"I believe that the conservative movement is stronger and more effective than the Republican Party," he says. The two are often conflated, but whether they're in politics or not, conservative thinkers are very influential. And despite the political rancor of the times, he says, they do want to have a conversation.

"They are people who, I think, are first and foremost interested in a civil dialogue," he says. "But I can tell you that they would disagree strongly with their friends on the left."

Read an excerpt of The Man In The Middle