Accessibility links
Urban American Indians Rewrite Relocation's Legacy In 1952, the federal government created a program that encouraged Native Americans to move off reservations and into cities such as Chicago, Denver and Los Angeles. They were lured by the hope of a better life, but for many that promise was not realized.

On the edge of downtown Los Angeles, Rae Marie Martinez looks for familiar landmarks. The 60-something grandmother turns in a slow circle and shakes her head. In 1957, she still had long braids and wore long dresses.

People made fun of her back then. "I remember they used to kick my heels all the way to school," Martinez says.

Los Angeles County is home to the largest urban American Indian population — more than 160,000. In 1952, the federal government created the Urban Relocation Program, which encouraged American Indians to move off reservations and into cities such as Chicago, Denver and Los Angeles. They were lured by the hope of a better life, but for many, that promise was not realized.

"The boarding schools, relocation — I mean, everything that historically happened to American Indians — continues to impact them today," Carrie Johnson says. Johnson is part of an effort to help those living with the consequences of the relocation program and build a new future for today's urban American Indian youth.

'So Much Had Been Promised'

Martinez was just 8 years old when her family traveled to California by car from the Colville Reservation in Washington state.

"Mom and Dad felt like they were making the right choice and decision in being part of the relocation program, because so much had been promised to them," she says. 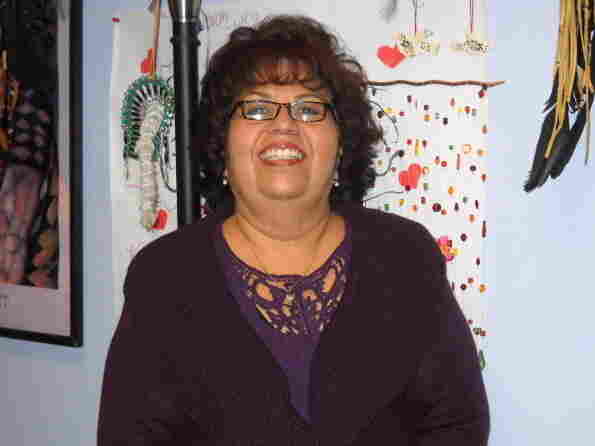 Rae Marie Martinez moved to Los Angeles with her family when she was 8 years old. She once struggled with alcoholism and an abusive relationship, but now coordinates a domestic violence program for other American Indians. Gloria Hillard/For NPR hide caption 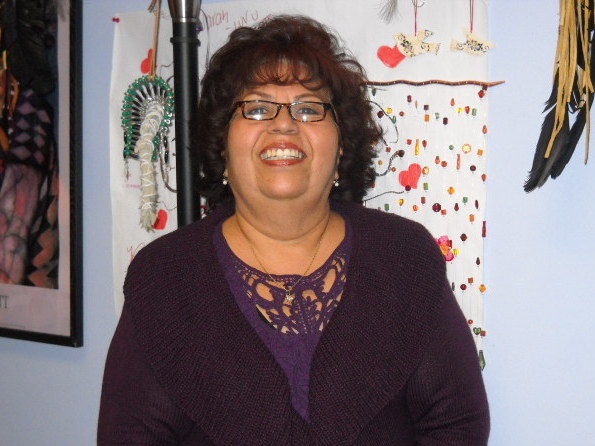 Rae Marie Martinez moved to Los Angeles with her family when she was 8 years old. She once struggled with alcoholism and an abusive relationship, but now coordinates a domestic violence program for other American Indians.

The program, run by the Bureau of Indian Affairs, promised the newly arrived families temporary housing and job counseling. She and her five siblings moved into the projects. Her parents received $80 a week, but just for one month.

"I think just being homesick, being away from everything that was familiar to me ... still makes me emotional," Martinez says. She missed the tall trees and apple orchards of her reservation.

To fit in, she tried to become invisible. Her mother cut off her braids. In time, Martinez became silent and later succumbed to alcohol and an abusive relationship. It's a story Johnson knows all too well.

"We see ... unfortunately, all these high rates of problems within our community," she says. "But I think on the positive side, what we're seeing is the healing."

Johnson is Dakota Sioux. She runs Seven Generations, a program for children and families at United American Indian Involvement. UAII is one of the largest service providers for L.A County's widely scattered American Indians and Alaska Natives. Johnson's program deals with what she calls the legacy of the relocation program — from assisting needy families to providing a number of mental and physical health services.

In a large, florescent-lit room, boys in multicolored high-tops and girls with blankets that serve as shawls attend a drum and dance workshop. 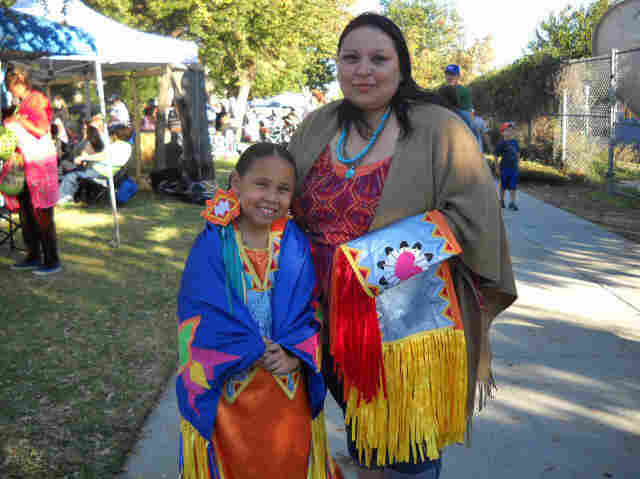 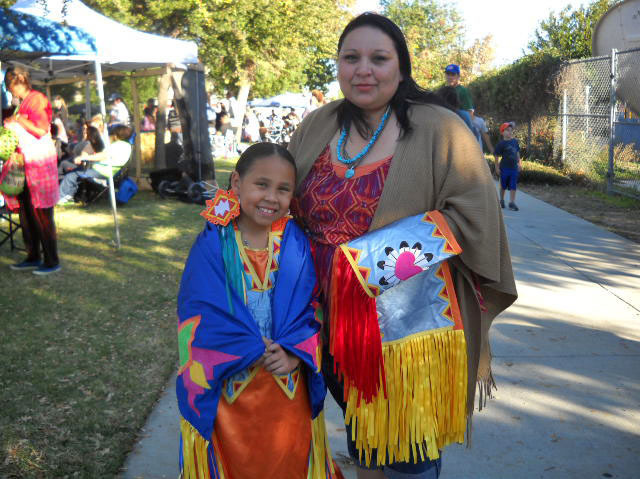 "We hold a workshop, and they can look around and see other Indian youth who look just like them growing up here in Los Angeles," says Ramon Enriquez, who grew up in L.A.'s Inglewood neighborhood not knowing any other American Indians. Now he's the director of youth services at the UAII center.

For many, the weekend powwows bridge the chasm between the city and the reservation. It's where 8-year-old Serenity Wyatt can be found in a brightly colored, beaded dress.

"I come from the Apaches called Dine, and my favorite thing to do is dance," she says. "I used to watch the dancers before I was even up on my feet. My mom used to take me out there."

Serenity's story is happier than Martinez's, but now Martinez uses her experience to help others.

"By the grace of God, I've been able to celebrate, this year, 30 years of recovery from alcoholism, of abuse, of so much trauma," she says, "the healing I've been able to experience and just being proud of who I am."