Accessibility links
Dog Trained As Ultimate Whale Pooper Snooper Scientists aren't sure what's wrong with the orcas in Puget Sound, but they're hot on the trail. A team of researchers is relying on a secret weapon with a killer nose to sniff out the mystery. 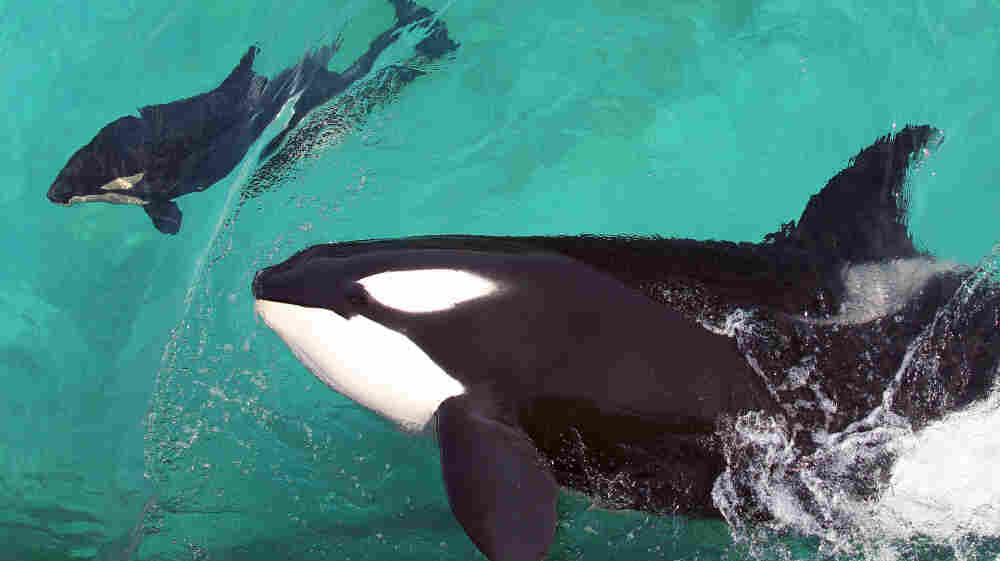 Orca poop is a "treasure trove of information," says Sam Wasser, the director of the Center for Conservation Biology at the University of Washington. Valery Hache/AFP/Getty Images hide caption 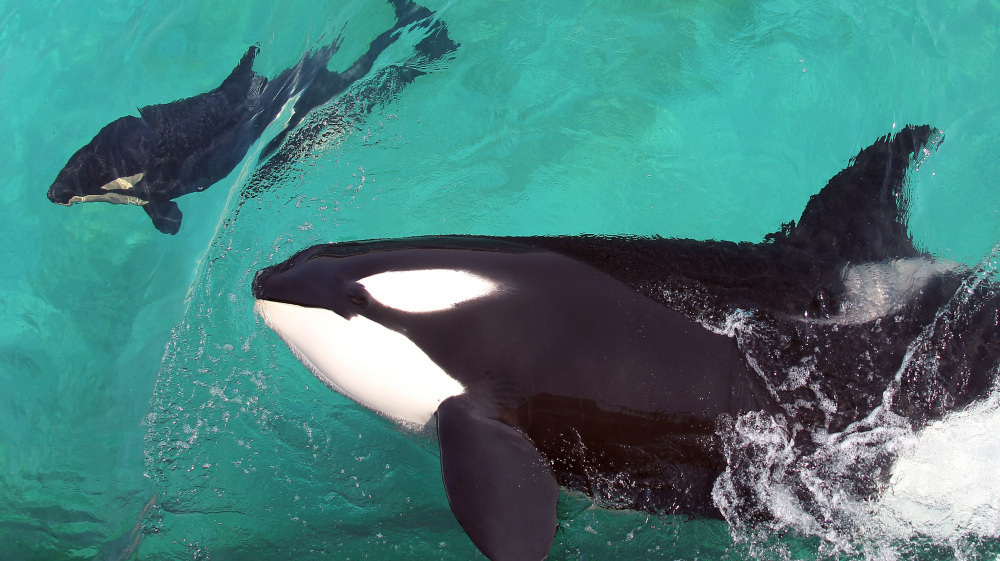 Orca poop is a "treasure trove of information," says Sam Wasser, the director of the Center for Conservation Biology at the University of Washington. 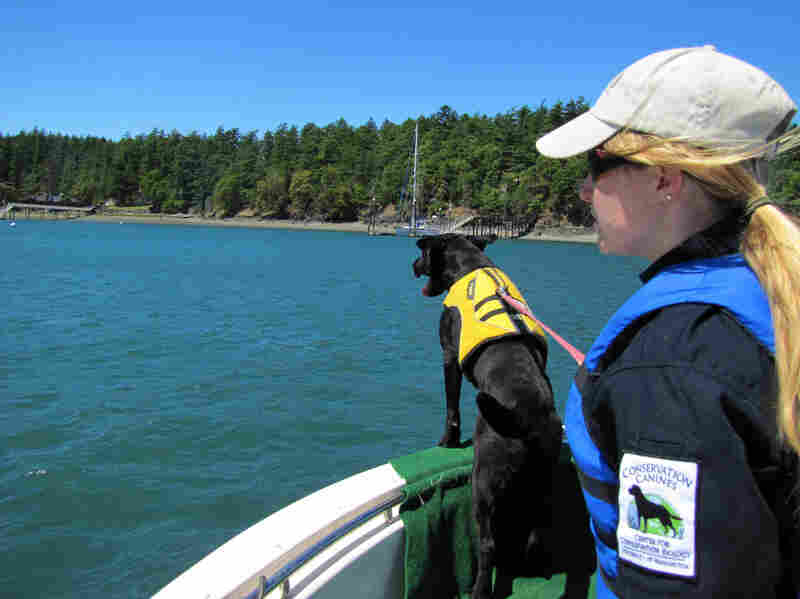 Trainer Liz Seely looks on as Tucker takes to the bow and sniffs the waves. Ashley Ahearn/KUOW hide caption 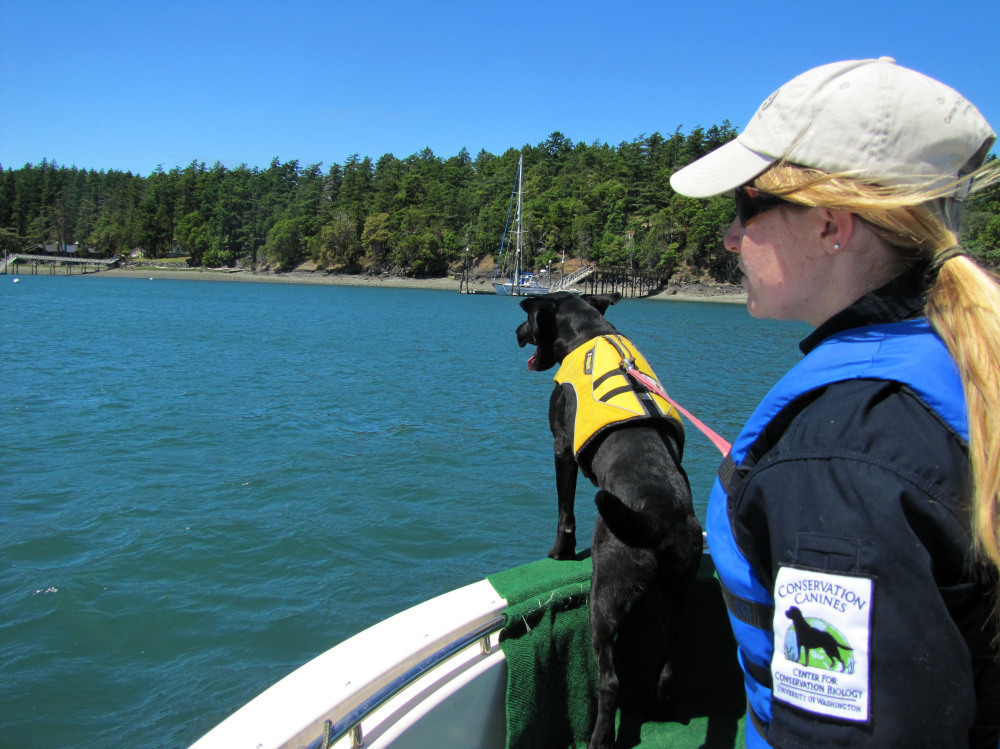 Trainer Liz Seely looks on as Tucker takes to the bow and sniffs the waves.

Killer whales in Puget Sound aren't doing very well. They were placed on the endangered species list in 2005, and there are several hypotheses for why they're not recovering.

In Puget Sound, a team of researchers is relying on a secret weapon with a killer nose to figure out what's wrong with the orcas in Northwestern waters.

'A Treasure Trove Of Information'

Scientists suspect lack of food, boat traffic and pollution are to blame, but no one knows for sure. Some think the answer might be found in the whales' wake — specifically, their poop.

"It looks kind of like a combination of algae and snot. It varies in color, but it's very mucusy," says Sam Wasser, the director of the Center for Conservation Biology at the University of Washington.

He likes to talk about poop, and he's especially excited about killer whale poop. Scientists have developed techniques to analyze feces from all over the world. Wasser says it's not gross; it's scientific gold.

"We can measure the diet of the animal. We can get toxins from the feces, DNA so we can tell the individual's identity, its species, its sex — and all of this is in feces," he says. "So it's literally a treasure trove of information."

But finding wild animal poop, especially whale poop, isn't easy, so Wasser has taken a creative approach to staffing his organization. He has Tucker, the team's "scat-detection dog."

Tucker is an 8-year-old black Lab mix. He's what those in the dog world call "ball-obsessed." He'll do anything for a game of fetch — even if that means sniffing out floating whale scat from a mile away — because he knows that when he finds the scat, he gets to play with his ball.

With that information, Wasser's been able to help prosecute ivory poachers in Africa, track wolverines in the Rockies, and better understand interactions between wolves and caribou in Canada.

Turns out, killer whales have the highest concentrations of toxic substances like pesticides and flame retardants of any creature on the planet. If scientists can understand more about the contaminants in these animals, they may be able to explain why they're not recovering.

The quest starts in San Juan Island's Snug Harbor, where Wasser and his team conduct research on killer whales. White caps slap at the bow of their research boat as it heads out of the base into some pretty rough water. Tucker wanders back and forth across the bow, but doesn't seem too excited.

"What he'll do if he doesn't have anything, is he'll come back and settle down and sit right next to me," says Liz Seely, Tucker's trainer. She has him on a leash as the boat crisscrosses the waters where the whales last surfaced.

"When he gets excited, he'll start standing up on the bow, wagging his tail, getting really animated. So for now, he's just checking the scene."

But as the team rounds a rocky outcropping, the radio pipes up with the identification numbers of a pod of killer whales spotted nearby. To the left, black dorsal fins emerge, several hundred yards away.

The team spends about 20 minutes bobbing along after the whales, but alas, Tucker comes up empty-snouted. The winds are too strong and the water's too rough for him to lock onto a scent.

Despite this unlucky mission, the team will continue to collect samples from killer whales in these waters throughout the summer. In the past, they've been able to show that during periods of high vessel traffic — Fourth of July weekend, for example — the whales have higher levels of stress hormones in their feces. They can also tell when the whales are undernourished and connect that to lower fertility rates.

With orca populations in Puget Sound still disturbingly low, researchers believe the answers may lie in these floating globules of data. After all, a sample of whale poop is kind of like a snapshot of pollution levels in coastal waters.

And that's a photograph worth looking at.