Accessibility links
Controversy Swirls Around Harsh Anti-Obesity Ads A Georgia hospital has launched an advertising campaign that grimly highlights the risks of childhood obesity. The goal of the "Stop Sugarcoating It, Georgia" ads is to shock families into recognizing that obesity is a problem. The ads are making an impact, but the tactics are raising questions. 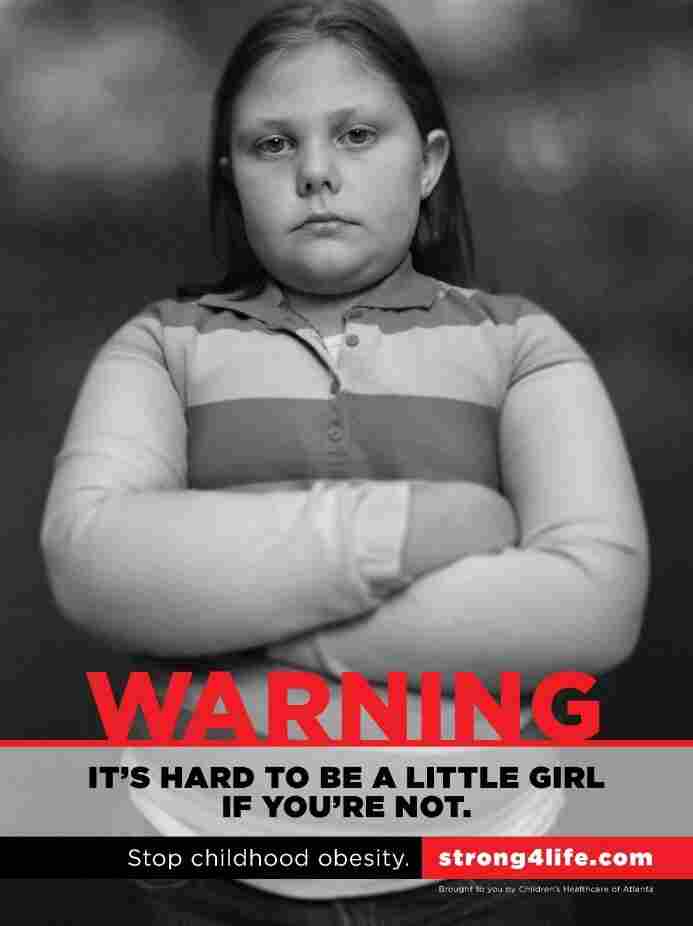 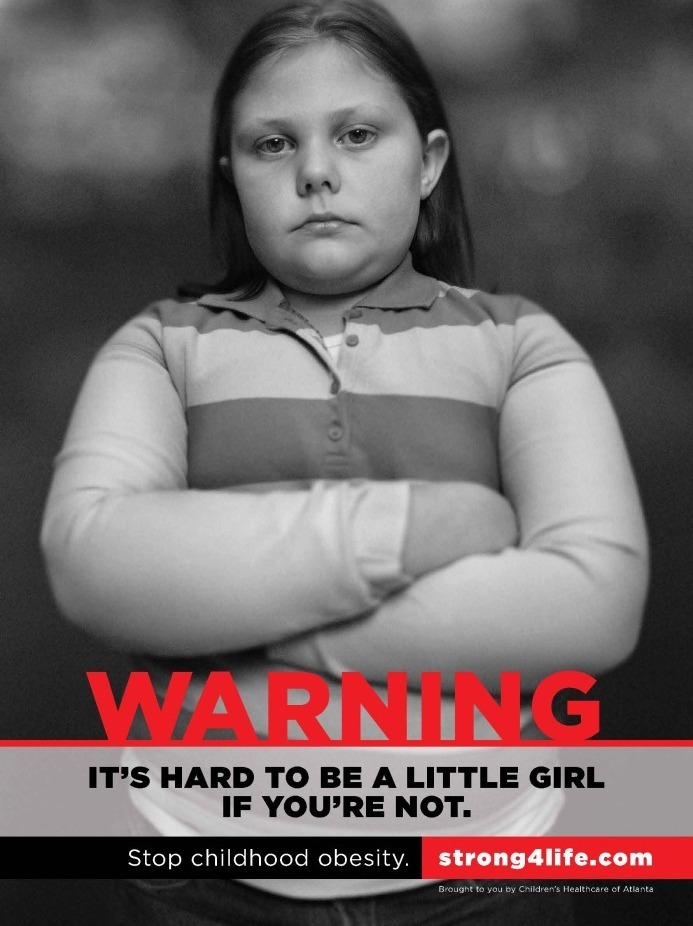 In one of the print ads in Children's Healthcare of Atlanta's Strong4Life campaign, a young girl says she doesn't like going to school, because "all the other kids pick on me. It hurts my feelings."

Courtesy of Children's Healthcare of Atlanta

Stark billboards and television commercials that feature overweight kids are part of a controversial anti-obesity campaign in Atlanta. The goal of the "Stop Sugarcoating It, Georgia" ads is to shock families into recognizing that obesity is a problem.

The campaign is making an impact, but the tactics are raising questions.

One of the ads features a little boy and his mom entering a room with two folding chairs. They're both clearly overweight. They sit and look at each other.

The mother bows her head, and the tag line appears. It reads: "75 percent of Georgia parents with overweight kids don't recognize the problem." Georgia has the second highest number of obese kids in the country, behind Mississippi.

In another spot, a young girl speaks directly to the camera about a disease she says she has.

"My doctor says I have something called hypertension," she says. "I'm really scared."

The ads are modeled after anti-smoking and anti-methamphetamine campaigns intended to shock the audience.

Watch this and four other video ads in the campaign at Strong4Life.

"It has to be harsh. If it's not, nobody's going to listen," says Linda Matzigkeit, vice president of Children's Healthcare of Atlanta, the pediatric hospital running the campaign.

She says parents are in denial. Nearly 1 million Georgia kids are overweight or obese. "This is a medical crisis, and I say if you don't believe me, come visit our hospital and see the kids we are now taking care of — that more and more have Type 2 diabetes, have hypertension, need knee replacements — and it's breaking our heart to see these adult-type diseases in the children that we serve," she says.

But some question the strategy. According to Rodney Lyn of Georgia State University's Institute of Public Health, "This campaign is more negative than positive."

More On The Obesity Crisis In The U.S.

Based on his research, Lyn says, the ads can hurt the very market they're targeting. "We know that stigmatization leads to lower self-esteem, potential depression. We know that kids will engage in physical activity less because they feel like they're going to be embarrassed. So there are all these other negative effects," he says.

The ads are part of a five-year, $25 million anti-obesity effort. It includes training pediatricians, getting programs in schools, and setting up a clinic to treat the medical and psychological issues related to obesity.

Gayla Grubbs owns a sandwich shop in Griffin, Ga. Her son Sam, 15, is obese. Grubbs says she's not upset by the anti-obesity ads that have raised controversy here.

Obesity is defined as body mass index greater than or equal to sex- and age-specific 95th percentile CDC growth charts from 2000.

"It plants a seed. And what we do with that is our responsibility," she says.

Grubbs says she realized her son needed help, so she took him to the Children's Healthcare clinic last year.

"I wanted to give Sam every opportunity to feel good about himself and to get healthy," she says.

Grubbs says she didn't tell Sam he was going to the clinic until they started driving there. Sam says he didn't really mind.

"I was being bullied a lot because of my weight, and after I started losing it, it cut down quite a lot. They don't call me names or anything like that anymore," Sam says.

"It's a self-esteem issue," his mother says. "If you feel better about yourself, you're going to carry yourself differently; and so that has helped."

Sam has lost 20 pounds so far, and wants to lose another 50 by the end of the year.

"I've been cutting back on my portion sizes a whole lot. Instead of like four or so pieces of pizza, I only have about two," he says.

And Sam says he doesn't eat pizza or fast food much anymore.

This kind of family intervention is exactly what health officials hope to see more of.

The second phase of the Children's Healthcare ad campaign is about to begin. Officials say it will focus on encouraging adults — parents, teachers and grandparents — to take action.