Accessibility links
New Republic: Boring Days In New Hampshire The New Hampshire primary is looming and for the candidates the pressure is on. Walter Shapiro of The New Republic argues that the current GOP hopefuls provide a droll show. 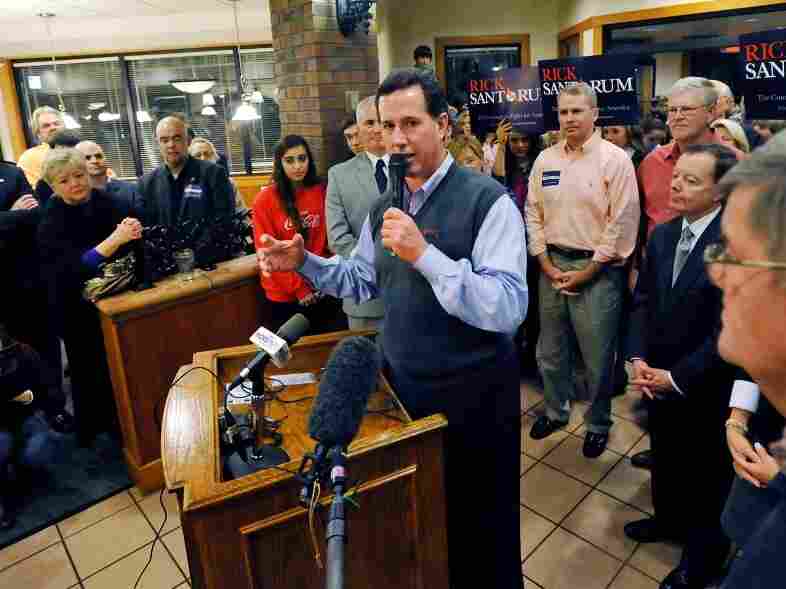 Read More On Santorum's Chances In The GOP Race

Read An Opinion On Our Broken Primary System

Walter Shapiro is a special correspondent for The New Republic. He also writes the "Character Sketch" column for Yahoo! News.

Having emerged unbloodied Sunday morning from the weekend's debate double-header, Mitt Romney barreled down Route 101 at more than 80 miles an hour towards a noon rally at the Rochester Opera House. (I can verify the speedometer reading since the Romney campaign bus zoomed past me in a 65-mile-an-hour zone and I tailed it until it turned off the highway). The front-runner's haste was understandable, since Romney wants this primary inscribed in the record books before his double-digit lead vanishes.

A Romney campaign appearance invites flights of fancy — not because of the poetry of the candidate's words but because of the vacuity of the play-it-safe event. In Rochester, after the requisite trio of endorsers (former Congressman Jeb Bradley, Senator Kelly Ayotte, and auditioning vice-presidential running mate Tim Pawlenty), the candidate's wife then introduced the Romney children and grand-children. The entire Romney clan was arrayed in such an orderly formation on stage — with minimal fidgeting from the grandchildren — that it brought to mind the middle-aged man seated behind Holden Caulfield at Radio City Music Hall and marveling over the Rockettes, "You know what that is? That's precision."

Romney's stump speech includes a patriotic reading of stanzas from "America, the Beautiful," ostensibly to prove that no one (certainly not that Europe-emulating president named Obama) can match his star-spangled patriotism. Listening to Romney, though, I was mostly inspired to recall the great Senate filibusters of yore, when exhausted legislators would read aloud fragments of poetry and pot-liquor recipes to run out the clock.

The sad thing — for those of us who love the spirited competition and hairpin turns of traditional New Hampshire primaries — is that Romney almost certainly will get away with his evasiveness. As a reporter chronicling his ninth New Hampshire primary (dating back to the days when George Bush boasted that he was "up for the Eighties"), I can recall no contested race in either party this devoid of energy. It feels like the primary is being conducted underwater, with every movement slow and exaggerated.

The spate of debates has pre-empted much of the personal campaigning that has been a cherished New Hampshire trademark. Rick Santorum even spent most of Sunday in South Carolina. Ad spending is down sharply with only Mitt Romney and Ron Paul running enough TV spots to make an impression on the casual voter. During the 1996 and 2000 Republican primaries, Steve Forbes spent so lavishly on television that the plush new headquarters of WMUR (the dominant station in the state) was jokingly dubbed, "The House That Steve Forbes Built." Now it might soon be called, "The House That the 2012 Republicans Sent Into Hock."

Even the overhyped-in-advance weekend debate-o-rama failed to live up to expectations. During Saturday night's ABC debate, Romney's five challengers each shrewdly waited for someone else to go after the front-runner before they belatedly realized that they were collectively giving him a free pass. Sunday morning on "Meet the Press" was the "esprit de l'escalier" debate, as Newt Gingrich, Rick Santorum and Jon Huntsman all finally delivered the attack lines that they forgot to use the night before.

The 6:00 pm Sunday local evening news on WMUR (an ABC affiliate) illustrated the evanescent quality of the twin New Hampshire debates. The first 15 minutes of the newscast solely was devoted to what the candidates had done after the Sunday morning debate, which meant that if you had not tuned into "Meet the Press" (albeit on a rival network) you pretty much missed the fusillades launched at Romney. The order in which WMUR covered the five GOP contenders was telling: Romney received ample top-of-the-hour billing, followed by Paul, Santorum (even though he had decamped to South Carolina), Huntsman and finally Gingrich. Just to underscore the fix-is-in-feeling that is permeating New Hampshire, the lone political ad at the end of the 15-minute campaign segment was a gauzy positive commercial for, of course, Mitt Romney.

Even though the primary is regarded mostly as a sack race for second place, Romney inspires all the enthusiasm of "Vegetables Are Our Friends" week in an elementary school cafeteria. My nominee for the typical New Hampshire Romney voter is Dwight Corning, a recent transplant from Connecticut who moved to Dover after he retired from an electronic firm. "I think Romney's reliable," Corning said after the rally in Rochester. "I don't think he'll do anything crazy when he gets in." A vote is a vote, but Corning sounded about as passionate as if he had been asked to recommend a CPA.

Romney's secret may simply be that all his potential major rivals for Reliable Republican decided to sit out the 2012 campaign: Mitch Daniels, Haley Barbour, Jeb Bush, and Chris Christie. Instead, all the competition in this low-energy contest is for who will emerge as the victorious Intemperate Conservative. By the time right-wing voters finally pick among Gingrich, Santorum, and Rick Perry, it will probably be too late to derail Romney. But still — thanks only to the unalterable rules of arithmetic — some candidate will head to South Carolina powered by the Little Mo from finishing second to Romney.

Predicting an order of finish in New Hampshire is fool's play. But here is an update on We-Try-Harder sweepstakes for Number Two:

Jon Huntsman. How he longs to be the Rick Santorum of New Hampshire, the candidate who earned his votes the old-fashioned way by dint of low-budget personal campaigning. After two strong debate performance this weekend, Huntsman may not be exaggerating when he told reporters late Sunday afternoon, "I believe we're going to beat market expectations." (Hint to Huntsman: Leave the blood-less language of Business Speak to Romney).

But this weekend's up-tick may be too little too late, even for second place. Huntsman will go down in political history as the first son of a billionaire forced to run a budget campaign. Unlike his New Hampshire rivals, Huntsman has not sent out a single piece of direct-mail advertising to primary votes. Throw in a late-starting TV campaign, and Huntsman may be that rare candidate whose name recognition on primary day is no higher than 80 percent. Huntsman has begun to remind me of 1988 Democratic contender Bruce Babbitt, whose pile of positive press clippings was higher than his vote total.

Rick Santorum. The conclusion is impressionistic, since New Hampshire's late-deciding voters and the debate double-header make reliable weekend polling difficult to find. But my sense is that Santorum's brief moment here as a plausible challenger to Romney popped like a soap bubble. Some of it is demographics and ideology: There are fewer right-wing blue-collar voters in this affluent state than when Pat Buchanan won the 1996 primary and Santorum's hard-edged views on homosexuality appear too extreme for secular New Hampshire. Inept advance work also has contributed to the problem — fire marshals forced a Friday afternoon town meeting in Manchester into a frigid parking lot.

Santorum, the only northeastern Catholic in the race, seems determined to make his last stand in the January 21 South Carolina primary. Even though 38 percent of the voters in the 2008 GOP New Hampshire primary were Catholic, Santorum jetted off to South Carolina (13 percent Catholic in the 2008) on Sunday. That vote-with-your-itinerary decision tells you all you need to know about Santorum's dwindling hopes in the first primary.

Newt Gingrich. The hardest candidate to handicap. Gingrich is drawing good crowds (more than 300 in Wolfeboro on Friday and an equal number in Salem on Thursday) who listen with rapt attention to his non-traditional stump speech and his lengthy question-and-answer sessions. Yet Gingrich was solid rather than stand-out in the weekend debates, which deprived him of his best arena for a breakthrough. No longer under barrage from Romney and Romney-connected SuperPACS (the virtue of irrelevance), Gingrich is pretty much back to his pre-resurrection role as an intriguing wild card in the GOP deck.

Ron Paul. I guess I should be inspired by how many young men are willing to stand on chilly New Hampshire street corners to wave Ron Paul signs and shout at passing motorists. But this is Ron Paul we're talking about — and the enthusiasm he inspires seems to be capped at 15-to-20 percent of the primary vote.

It is an impressive tribute to the stubborn independence of New Hampshire voters. But the list is very unlikely to get a tenth entry this year.