Accessibility links
Iran Cultivates Friends In Washington's Backyard Mahmoud Ahmadinejad, the Iranian president, is turning to allies in Latin America for diplomatic support, as Iran grows increasingly isolated over its nuclear program. He is visiting Venezuela, Nicaragua, Cuba and Ecuador — all left-leaning nations that are sharply critical of U.S. foreign policy. 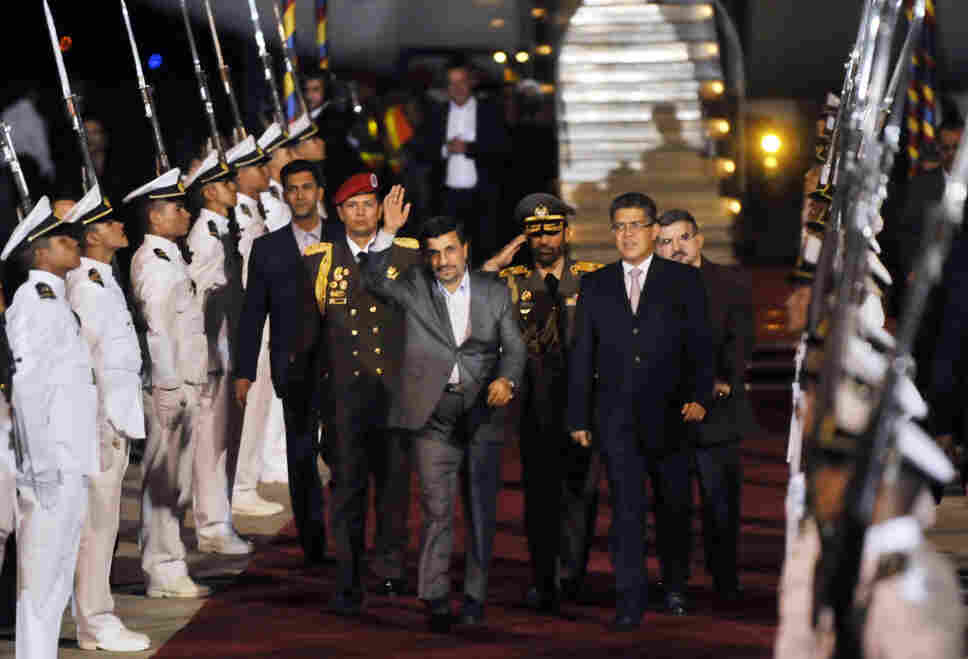 Iranian President Mahmoud Ahmadinejad waves as he is welcomed by Venezuelan Vice President Elias Jaua (at right, wearing glasses and tie) at the airport in Caracas on Sunday. Ahmadinejad is on a five-day tour aimed at shoring up ties in Latin America. Juan Barret/AFP/Getty Images hide caption 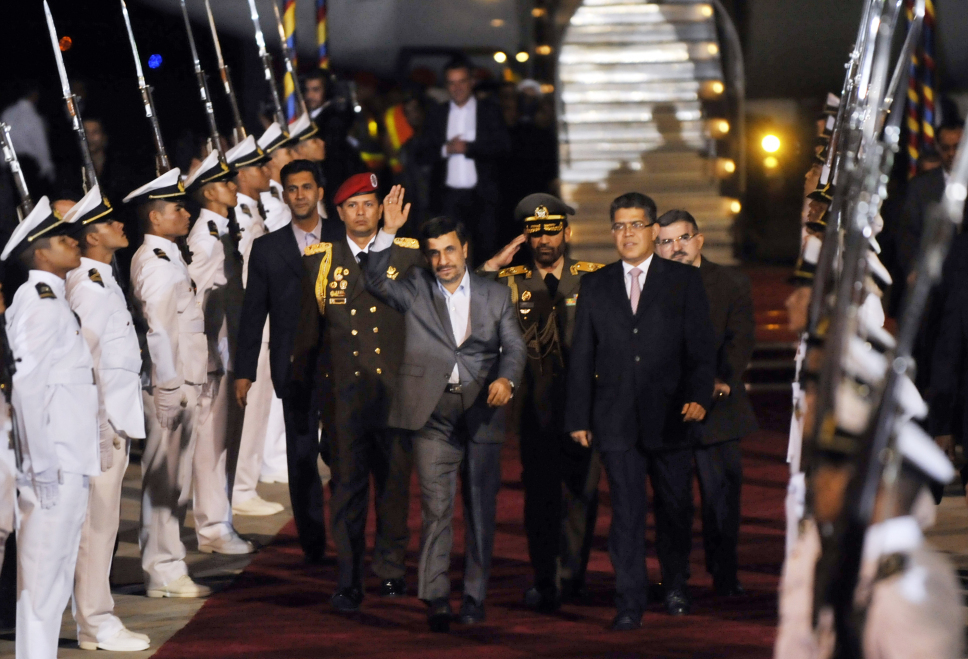 Iranian President Mahmoud Ahmadinejad waves as he is welcomed by Venezuelan Vice President Elias Jaua (at right, wearing glasses and tie) at the airport in Caracas on Sunday. Ahmadinejad is on a five-day tour aimed at shoring up ties in Latin America.

Isolated by the West because of Iran's nuclear program, Iranian President Mahmoud Ahmadinejad is turning to close allies in the Americas for diplomatic support.

He kicked off his four-nation tour of Latin America on Monday in Venezuela, whose president, Hugo Chavez, accuses the U.S. of trying to dominate the world. Ahmadinejad's next stops are Nicaragua, Cuba and Ecuador — all sharply critical of Washington's foreign policy.

On his TV show, Hello Mr. President, Chavez has attacked the Obama administration, saying it's trying to stop Iran from rightfully becoming a medium-size power.

Chavez said those efforts by "the empire," as he calls the United States, are laughable.

The Iranian leader's Latin America tour comes at a time when his country is struggling find allies in other parts of the world.

The U.S. and Europe have stepped up sanctions against Iran. Meanwhile, Iran's relations in its own neighborhood are troubled. Iran is seen as having some influence in Iraq, which like Iran, is a mostly Shiite Muslim state. But Iran's main Arab ally, Syria, is embroiled in a violent uprising.

And many other Arab states, particularly Saudi Arabia, are extremely wary of Iran and want to see its influence kept in check.

Russia and China are two important countries that have cooperated with Iran and have generally been reluctant to impose sanctions. But overall, Iran has become more isolated recently and its already troubled economy is in danger of suffering additional blows.

The U.S. is desperate, the Venezuelan president explained.

He then had a message for President Obama: Focus on your own problems back home.

It was just the kind of message Iran's leader came to Latin America to hear.

Washington has slapped sanctions on Tehran, causing Iran's currency to tumble. And Europe is moving toward tightening the noose, part of a broad effort to cripple Iran's nuclear program.

Cynthia Arnson, director of the Latin American Program at the Woodrow Wilson International Center for Scholars in Washington, says Ahmadinejad's arrival in Venezuela permits Iran to claim it still has friends.

"And it's particularly useful to have allies in Latin America, which has traditionally been considered the United States' backyard. So it's a really important way of thumbing its nose at Washington and making common political cause with governments in the region who also share an anti-imperialist and anti-U.S. ideology," Arnson says.

Building Bridges In The Region

Under Ahmadinejad, Tehran has moved energetically to build ties in the region.

The Iranians have signed dozens of economic agreements with a number of countries.

On Venezuelan state television Monday, a report touted a joint project with the Iranians that provided 2,500 poor families with homes.

But other projects promised by Tehran for the region, particularly pledges to build dams and ports, refineries and hospitals, never materialized, says Arnson.

"Some of these have gone forward, particularly in Venezuela, but I think there's a huge difference between the signing of the agreement and what's actually implemented and turned into something real," she says.

And Tehran has only received diplomatic support from a small group of small countries that are ideologically opposed to Washington, but wield limited influence.

Analysts say it's notable that the Iranian leader is not visiting Brazil or Mexico — countries with big, diverse economies and governments that carry international weight.

It's a really important way of thumbing its nose at Washington and making common political cause with governments in the region who also share an anti-imperialist and anti-U.S. ideology.

Cynthia Arnson of the Woodrow Wilson Center, on Ahmadinejad's cultivation of ties with Latin American countries

Still, the State Department says it's monitoring Iran's role in Latin America. And spokeswoman Victoria Nuland recently told reporters that the U.S. wants to discourage countries from dealing with Iran.

"We are making absolutely clear to countries around the world that now is not the time to be deepening ties, not security ties, not economic ties, with Iran," Nuland said.

Stephen Johnson is a former U.S. Defense Department assistant secretary for the region.

He says that Washington is focused on making sure Iran is not finding ways to circumvent sanctions.

And the problem, he says, is that many of Iran's activities in the region are not transparent, particularly in Venezuela.

"There are joint ventures in which there are members of the Iranian [Revolutionary] Guards that are taking part. Companies such as the tractor company and the car company have links to the Iranian guards, so there are possibilities for exchanges there," Johnson says.

For now, though, the U.S. is simply watching from afar as Ahmadinejad gets the red-carpet treatment in the region.