Accessibility links
Michelle And Barack Obama: A Powerful Partnership New York Times Washington correspondent Jodi Kantor interviewed more than 200 sources, including White House aides and friends of the Obamas, to paint a portrait of the first family's life inside the White House. 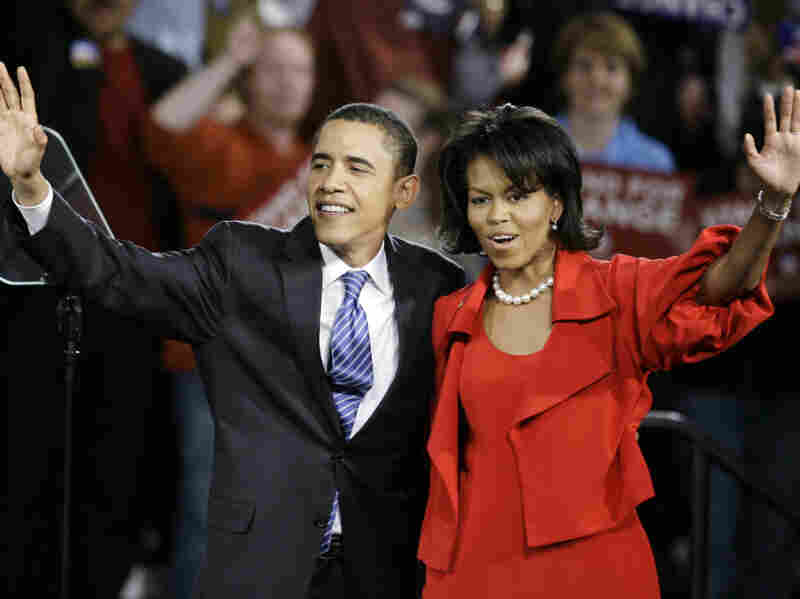 The Obamas wave to a crowd on a campaign stop in 2008. Reporter Jodi Kantor details how they figured out how to maintain their friendships and family life after moving into the White House. M. Spencer Green/AP hide caption 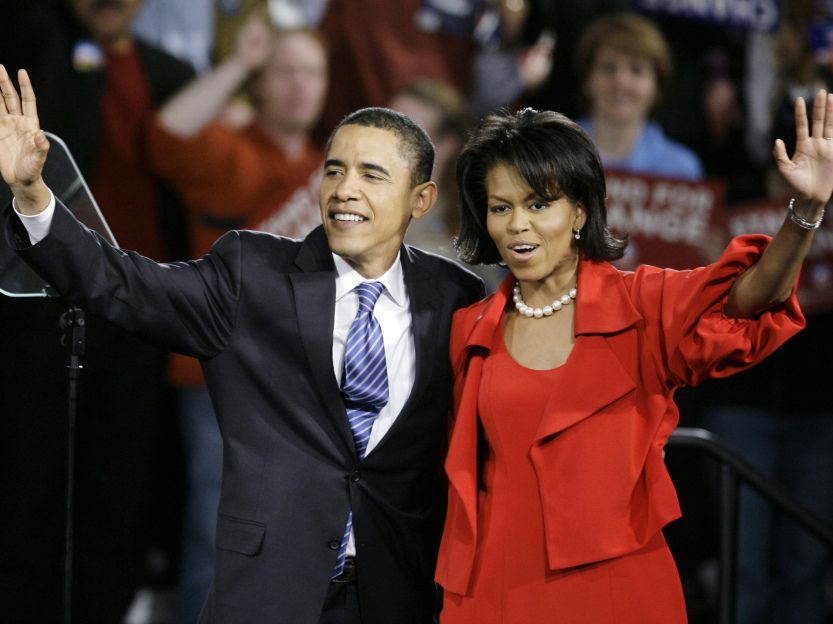 The Obamas wave to a crowd on a campaign stop in 2008. Reporter Jodi Kantor details how they figured out how to maintain their friendships and family life after moving into the White House.

In late 2006, Barack Obama held a meeting with his wife, Michelle, and his advisers to weigh whether he should run for president.

"And Michelle Obama, in front of everybody, asks her husband a very dramatic question," says New York Times Washington correspondent Jodi Kantor. "She says, 'What do you think you can bring to this that the other candidates can't?' "

Her husband paused for a second, and then responded, "I really think if I became president, it would inspire people all over the world to think of new possibilities."

"What he was talking about, of course, was the fall of a racial barrier," Kantor says. "Being role models is essential to why the Obamas first decided to do this. And yet, when you're a role model, you open yourself up so entirely. You are putting yourself on the line so completely, and everything you do is open to criticism." 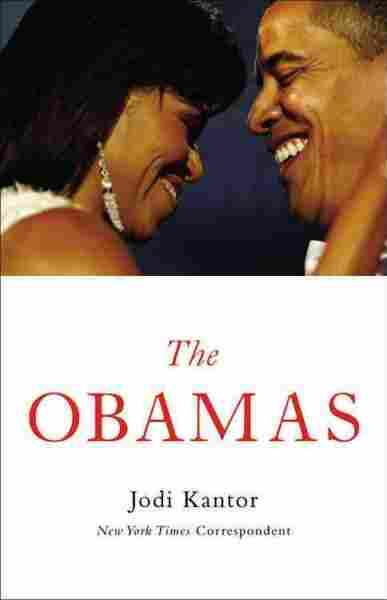 Kantor traces how the Obamas have dealt with that criticism — and tried to maintain their marriage and family life in the midst of a very public spotlight — in her new book, The Obamas.

"My goal was to write a book about the presidency that treated the president and the first lady as partners, which is what I truly think they are," she tells Fresh Air's Dave Davies.

According to Kantor, the first lady initially had serious reservations about her husband's ambitions for the White House.

"She was worried, in part, about the impact on her family. But she also had concerns that it may not be the right time," Kantor says. "Her chief of staff told me that during that time, the decision just weighed on Michelle Obama — because she really believed that her husband could accomplish great things as president, but she wasn't sure if it was the best thing for their family. And how do you make that choice between what is best for you personally versus the contribution you think you can make to the country?"

During the campaign in 2008, Michelle Obama continued to have a rough time.

"She was up against Bill Clinton, because that was Hillary Clinton's spouse," Kantor says. "In early events, she charmed lots of people ... But she also had problems. In the spring of 2008, she was accused of being 'an angry black woman.' Fox News called her a 'baby-mama.' There were a lot of ugly things said about her."

Friends and aides told Kantor that Michelle Obama was extremely hurt by the accusations.

"She thought of herself as one type of person, and to see that image so widely distorted — and it can happen so fast — it can be really disorienting for anyone," Kantor says. 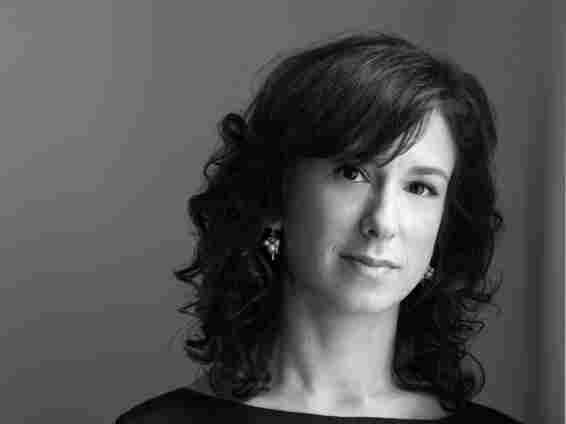 Jodi Kantor spoke to more than 200 sources, including White House aides and close friends of the president, while researching her new biography on the Obamas. Kantor is a Washington correspondent for The New York Times. Juliana Sohn/Courtesy of the author hide caption 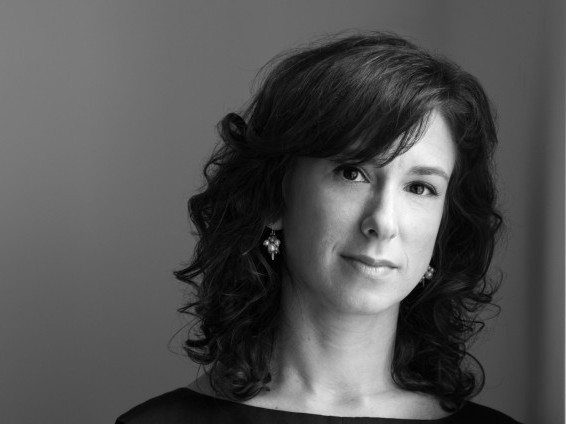 Jodi Kantor spoke to more than 200 sources, including White House aides and close friends of the president, while researching her new biography on the Obamas. Kantor is a Washington correspondent for The New York Times.

Juliana Sohn/Courtesy of the author

So when the Obamas got to the White House, they made a conscientious effort to clamp down and surround themselves with people they already knew from Chicago — to keep some sense of normalcy.

"A lot of their instincts become very self-protected," Kantor says. "Again and again, in my reporting, I found the motif of them drawing up the gangplanks."

But recently, Michelle Obama has seemed much more comfortable with her role.

"She's really popular. She's much more popular than her husband, and that has really given her so much internal leverage because they need her so badly for 2012," she says. "She's totally key to their strategy, and if you look at her in the last couple of months, she's gone from appearing not too frequently to being almost ubiquitous. And she's become much more comfortable in public life, and much more comfortable politically. For 2012 ... she says she's all-in this time."

"His day is scheduled by 33 people. Imagine being the first lady and worrying about his sleep or if his kids have an event at school. Who does she talk to to interface with his schedule? What is the right procedure? And this is a first lady who is very aware of not being seen as a meddling spouse."

"Barack Obama has always been a real optimist about what can be accomplished. He believes that government can be used to create systemic, long-term, real change. And the first lady is more of a skeptic in the relationship, but she's also the idealist ... She said again and again [after watching her husband in the Illinois Legislature] that she didn't come to the process with a lot of faith that politics could really improve people's lives for the better."

On moving into the White House in 2008

"They discover that the place is nothing like a normal American family home. There's no private entrance or exit where they can go undetected. There isn't what we think of as a contemporary American kitchen, where the family can sit around at bar stools and make coffee in the morning. There's no way for Michelle Obama to spontaneously walk Bo, the new dog, just wearing sweats and a T-shirt without the possibility of being caught by photographers."

On the White House staff

"Many of the residential staff are older African-Americans, and they were so excited when the Obamas got there. A White House aide told me that on the night of Inauguration, the White House staff just couldn't contain themselves," she says. "So then the Obamas move into this very unusual house, they're the rare first couple not to have lived in some executive mansion beforehand ... and one of the president's best friends said to me, 'We feel so connected to this staff because they're working-class African-Americans, and that's our background too. It's strange for us initially to be waited on by these people because we feel like we know them.'"

"Sen. Daschle really, really urged it, and I think it's been really hard for the president to do for a couple of reasons. One is [his] family time, which is extremely important to him. And the other is the Republican strategy really has been one of total opposition. So what a lot of people in the White House said to me was, 'Look, this is their strategy. It's total opposition. A little canape and cocktail frank is not necessarily going to break down the wall of mistrust we have with Republicans.' That said, Sen. Daschle's point was that you just have to keep trying. You just have to keep hammering away. Interestingly, that's not at all what the president is doing now. If you look at his strategy for 2012, he's basically been really honest about the fact that he's going to be attacking the Republican Congress right and left. This era of Barack Obama trying to be this bipartisan uniter seems to be over, at least for now."

"They established a 'no-new friends' rule. [The first lady's brother told me], 'Look, we don't know what other people's agendas are. We're essentially freezing our friendships where we are now.' [The first family] basically decided, 'We're not here in Washington to make new friends.' They wanted to spend their time with the same group of people.'"

On the president's close friendships with Eric Whitaker and Marty Nesbitt

"They both said to me that they make the point of almost never challenging the president on anything, and in fact, don't talk about work with him — they wait for him to bring it up. So, on the one hand, they're certainly doing the job of keeping things normal by playing pool or basketball with him. But on the other hand, if there are things that your friends are not willing to raise with you, is that total normality either? The whole question of what is or isn't normal in the White House is just something that keeps coming up again and again."