Accessibility links
Hard Day's Delight: A School Of Rock, At The Office There's no better way to build a team than to start a band, say the executives of one telecom firm who met while playing music. Soon, their employees will play against each other in a companywide battle of the bands. The only rule is they have to pick an instrument they don't already know how to play. 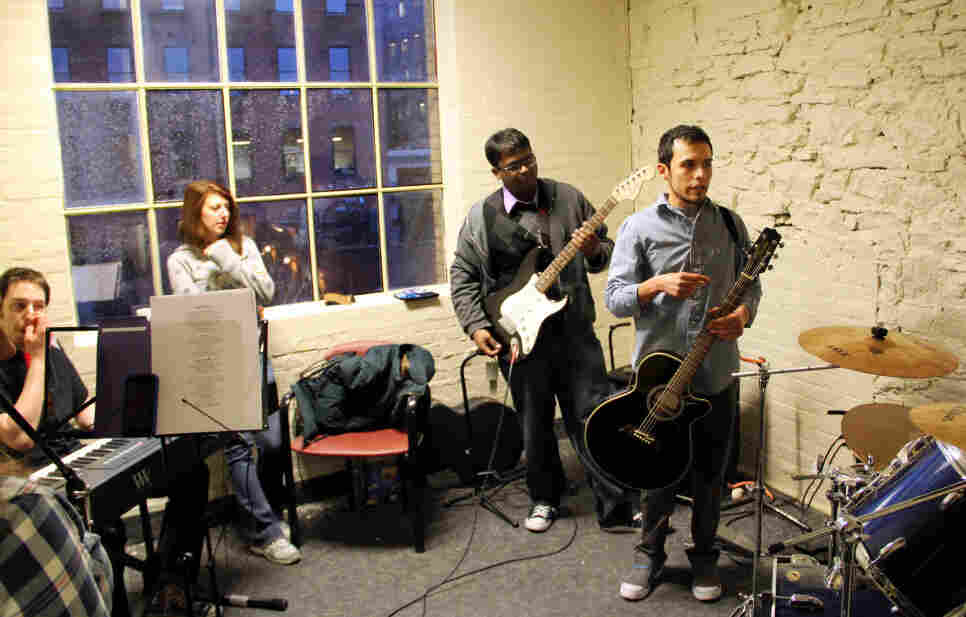 Music educator Ivan Trevino (right) leads band practice for M5 Networks employees in Rochester, N.Y., who will play against other branches in a battle of the bands. The telecom company says it wants its employees to learn new things (and stay happy). Zack Seward for NPR hide caption

It's 4 o'clock on a Thursday, and instead of sitting in front of computer screens, a group of software engineers and customer service reps from M5 Networks is in the middle of band practice.

M5 is a telecom company based in New York City that offers Internet phone services. But it offers something else for its employees: At the Rochester, N.Y., office of M5, workers are gearing up for a companywide battle of the bands against other branches.

"The great thing about this program is that you're required to learn something new," says Myriah Marsh, the Rochester office manager who's learning how to play the bass.

"I have small hands so they don't really want to cooperate with me. So it's just a matter of getting my fingers used to it and developing that muscle memory," Marsh says of her new instrument.

Marsh is one of about two dozen Rochester employees participating in the music program, known as "M5 Rocks." Bands of about four or five co-workers get together every week to work through covers of rock songs, and the only rule is you can't play an instrument you already know how to play.

Innovation Trail is a reporting collective that covers the economy, technology and innovation in upstate New York.

Ivan Trevino, an educator from Rochester's Hochstein School of Music, is in charge of band practice. He says the folks from M5 are model students. "They're at work all day, so for them to take a break and do something different, they're usually pretty happy to be there," he says.

Trevino says the school of rock for grown-ups is a first for Hochstein. It all stems from a meeting with the founder of M5's Rochester office, Phelim White.

"The way he put it was really intriguing," Trevino says. "He said, 'We want our employees to continue to learn new things.' "

A driving force behind the music program, White is a musician himself — he was a drummer in a few bands that toured his native Ireland and then later the United States.

White says most people don't want to learn something new they're really insecure about. But the founders of M5 met while playing music, and company CEO Dan Hoffman says he's long wanted to find a way to incorporate the ethos of a rock band into his growing telecom business.

M5 execs say the program is about more than just finding time to jam. There's no better way to build a team than to start a band, White says.

"[There's] the accounting person getting together with an engineer and a sales guy — all these different departments coming together as a band — as a unit — and learning how to be great together," he says.

That's not just lip service, White says — M5 is all about providing businesses with telecom services they will love. The company has about 2,000 client companies nationwide and is a leader in cloud-based phone services.

"Happy colleagues, happy customers, right?" he says. "If you're going to have a commitment to your customers loving your service, the first commitment has to be to the staff."

That companywide commitment leads to one big event this coming May: M5's 12th-birthday bash in New York City. The centerpiece is a battle of the bands that pits M5 offices in Rochester, Chicago and Manhattan against each other in friendly competition.

Bands will take the stage in front of an audience of about 2,000 that will include colleagues, customers and even prospective clients.

A Percussionist's Life: Beating The Drum For Gigs June 3, 2010