Accessibility links
Indiana Democrats Losing Fight Against Union Limits Last session, Democrats fled to Illinois to prevent a vote on right-to-work legislation. This session, they prevented a quorum. But with $1,000-per-day fines for absences and a House committee approving the measure, the bill is likely to go through. 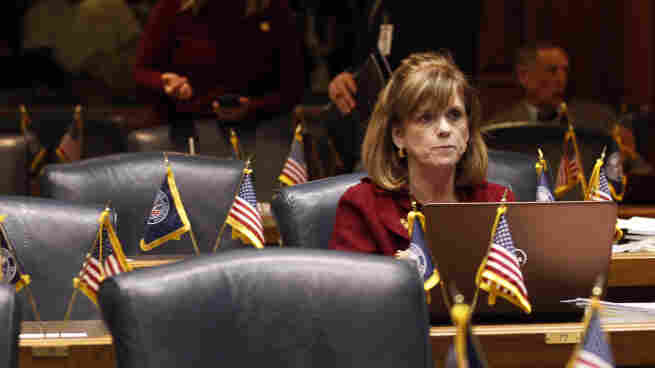 Indiana state Rep. Peggy Welsh is one of a few Democrats who occupied her House seat last week when Democrats tried to prevent a vote on a bill that would make Indiana a right-to-work state. Michael Conroy/AP hide caption 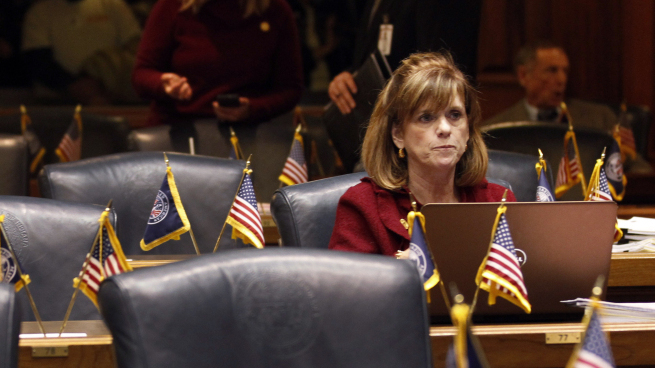 Indiana state Rep. Peggy Welsh is one of a few Democrats who occupied her House seat last week when Democrats tried to prevent a vote on a bill that would make Indiana a right-to-work state.

Republican legislators and Gov. Mitch Daniels continue a push to make Indiana the 23rd state in the country to enact right-to-work legislation.

A bill before the House would ban union contracts that require nonunion employees to pay fees for representation. Indiana Democrats are working to delay the process as long as possible, but their options are becoming increasingly limited.

"This is such an important bill, such a controversial bill, [that] the whole state ought to hear from it," Minority Leader Pat Bauer said. "We don't need to ram it through."

Republicans say they've done their due diligence. Over the summer, a legislative study committee took 20 hours of testimony on right-to-work. And a joint House and Senate committee spent more than five hours on the bill last week.

Speaking at that committee meeting, Democratic Sen. Jim Arnold all but conceded defeat.

"I truly don't believe ... that any minds or any votes are going to be changed by what was said here today," Arnold said.

Right-To-Work States Across The Country

Twenty-two states, mainly in the southern and western part of the country are "right-to-work" states, meaning that union-represented employees can opt out of paying dues on an individual basis. This differs from the "closed shop" model in the East and Midwest where all those represented by a union are obligated to pay dues in exchange for collective bargaining rights.

This isn't the first time Republicans have tried to pass right-to-work legislation in Indiana.

When Republicans pushed it last year, Democrats fled to Illinois for five weeks, halting business in the Legislature and forcing Republicans to take it off the table.

This time around, Democrats have stayed in Indianapolis, but off the House floor. They denied a quorum the first three days of session last week.

The two sides seem entrenched. Supporters of the legislation say it will bring more jobs to Indiana. Opponents say it's nothing more than a union-busting bill that will create lower wages and worsen safety conditions.

"We will do our very best to encourage them to do what is right, which is to show up at work and do what they were elected to do, even if you disagree with what you think the result might be," Bosma says. "Democracy is about participating, not going on strike."

But Republicans have some added leverage this time.

The Legislature passed an anti-bolting statute last session, so daily $1,000 fines can now be assessed on members who are absent three or more days straight without an excuse. Bauer acknowledges the difficulty the threat of fines puts on his caucus.

"We know we can't stay out indefinitely," he says. "But we did need to slow the process down, which we've succeeded in doing."

Over the weekend, Democrats held public meetings around the state. On Monday, House Democrats returned to the floor, allowing the chamber to finally conduct business. But the legislative cease-fire didn't last long.

By Tuesday morning right-to-work passed a House committee along party lines. The committee chairman didn't allow more public testimony or amendments to be heard, and House Democrats left the floor again. Whether they come in for session each day is in a constant state of flux.

Brian Vargus, a professor of political science at Indiana University-Purdue University Indianapolis, says Bauer thinks more time will allow the public to be educated and make their voices heard. But he's not seeing any signs of that.

"The hearings they had around the state did not generate that much coverage," he says, "and I don't know that they were attended by anybody but union members who were already involved."

Vargus says hoping public opinion will sway enough Republicans to defeat the measure is the equivalent of a "Hail Mary" pass. And even though Bauer represents South Bend, home to the Fighting Irish, this legislative game appears to be in the final quarter — and, it looks like there's little to stop right-to-work from becoming law in the coming weeks.