Accessibility links
Political Battle Brewing Over New Voter ID Laws New state laws will require millions of voters to show photo identification when they cast ballots this year. Republicans claim the measures will prevent election fraud. Democrats and activists oppose them, arguing that they are unnecessary because voter fraud is rare. 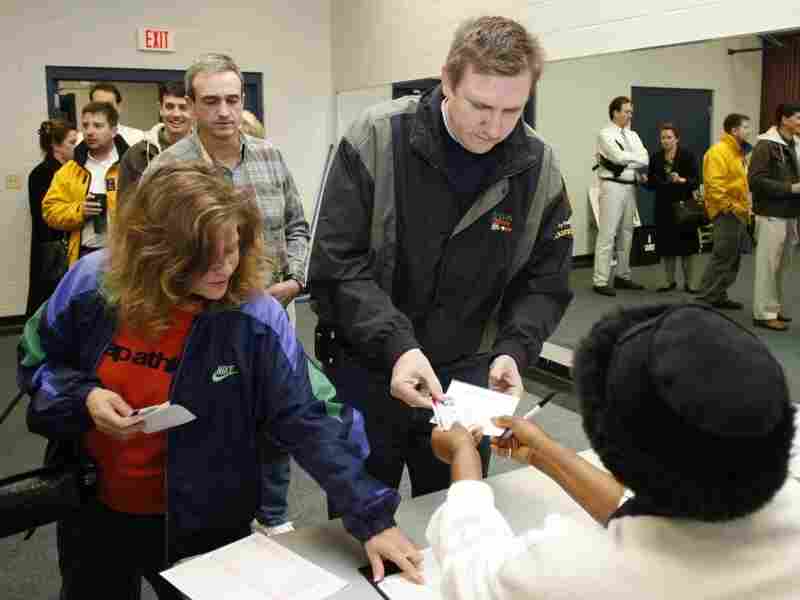 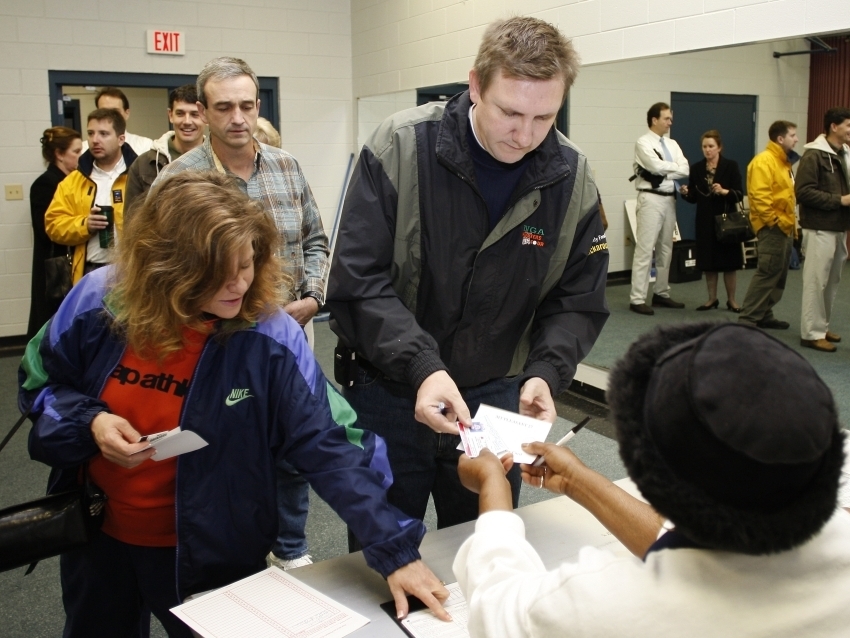 As the presidential campaign kicks into high gear, a fight is brewing over stricter voting laws that could affect turnout and influence general election results in battleground states.

New laws in several states will require millions of voters to show photo identification when they cast ballots this year, the result of a nationwide push mostly by Republicans who claim the measures will prevent election fraud. Democrats and voting rights activists oppose the laws, arguing that they are unnecessary because voter fraud is rare.

Opponents also say the laws are part of a Republican strategy to suppress turnout among scores of eligible voters — particularly young voters, poor voters and African-Americans — who tend to favor Democratic candidates.

In 2008, the Supreme Court upheld a voter-identification law in Indiana, saying that requiring voters to produce photo identification is not unconstitutional and affirming that states have a "valid interest" in improving election procedures and deterring fraud.

Now 31 states require voters to show some form of identification at the polls. Fifteen of them require photo IDs. (The rest require identification without photos, such as a voter registration card, Social Security card or other government-issued ID, or a utility bill or bank statement showing a home address.)

Many of these states have passed other laws that scale back early voting periods — which have often benefited Democratic candidates — or stop allowing people to register to vote on Election Day, a practice credited in 2008 with adding tens of thousands of new voters, the majority of whom voted for President Obama.

A recent study by the Brennan Center for Justice at New York University, which opposes such laws, estimated that the new laws could harm 5 million voters. About 18 percent of seniors and 25 percent of African-Americans don't have photo identification, according to the study.

Critics decrying the laws as purely politically motivated say the laws have been passed particularly in 2012 battleground states. The Brennan Center report found that states that have passed such laws hold 171 electoral votes, or 63 percent of the 270 votes needed to win the presidency.

Voter ID Laws Across The Nation

"These new restrictions fall most heavily on young, minority and low-income voters, as well as on voters with disabilities," researchers Wendy R. Weiser and Lawrence Norden wrote in the study. "This wave of changes may sharply tilt the political terrain for the 2012 election."

Opponents are fighting back. Groups such as the Brennan Center and the American Civil Liberties Union are filing lawsuits to block such legislation, and have successfully scuttled voter ID bills in Ohio and elsewhere. Democratic governors in Minnesota, Missouri, Montana, New Hampshire and North Carolina vetoed strict new photo ID laws in 2011.

In some cases, these are state battles. In others, the federal government plays a role: The 1965 Voting Rights Act mandates that the Justice Department approve any changes to the election laws proposed in nine southern states, including South Carolina and Texas, which have a history of racially discriminatory voting practices.

Here's a rundown of states with voter ID laws, including battleground states in which these laws could help sway the outcomes on Election Day:

Where Legal Battles Are Heating Up

South Carolina: As mentioned, the state's new photo ID law was rejected by the Justice Department on the grounds that it would violate the Voting Rights Act by disproportionately harming minorities, who are more likely to lack IDs. Gov. Nikki Haley, a Republican, has vowed to fight the decision, which would require asking the federal court for a reversal. The state's existing non-photo ID law remains in force.

Mississippi: After proposals failed in the Legislature, voters passed a photo ID law, which now requires Justice Department approval to be implemented. If Justice rejects it, as with South Carolina's law, Mississippi also is expected to seek a reversal in federal court.

Texas: The state tightened existing voter ID law to require photos. But, like with the South Carolina and Mississippi laws, the Justice Department must approve it. This deeply red state, home of Gov. Rick Perry, is almost certain to appeal a rejection.

Kansas: Photo ID is required. Obama isn't likely to compete here, given the state's reliably Republican voting history in presidential elections, including in 2008.

Rhode Island: Voters can show a non-photo ID this year, but will have to present a photo ID starting in 2014. Obama won the state easily in 2008. With its small size and solidly Democratic-leaning history, the state isn't expected to be competitive this November. 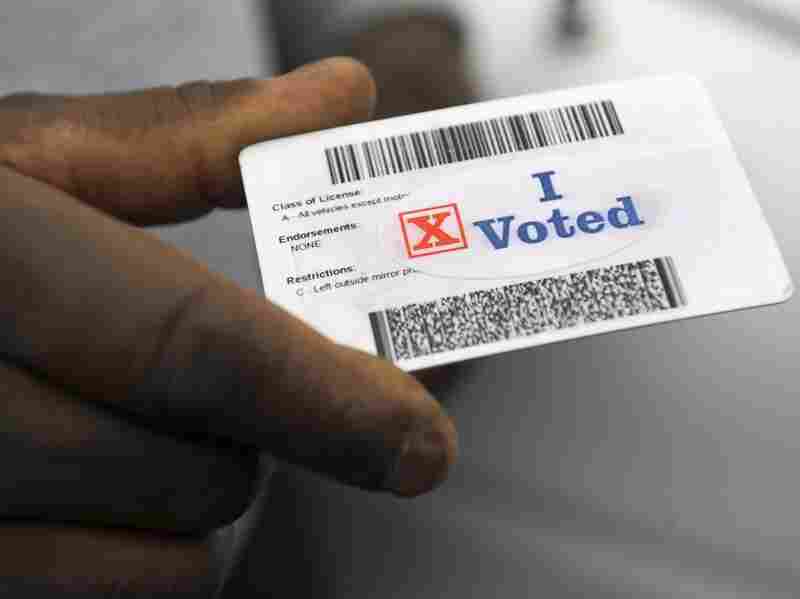 Verdell Winder of Washington holds up his driver's license showing his "I Voted" sticker after voting on Election Day on Nov. 4, 2008. Jacquelyn Martin/AP hide caption 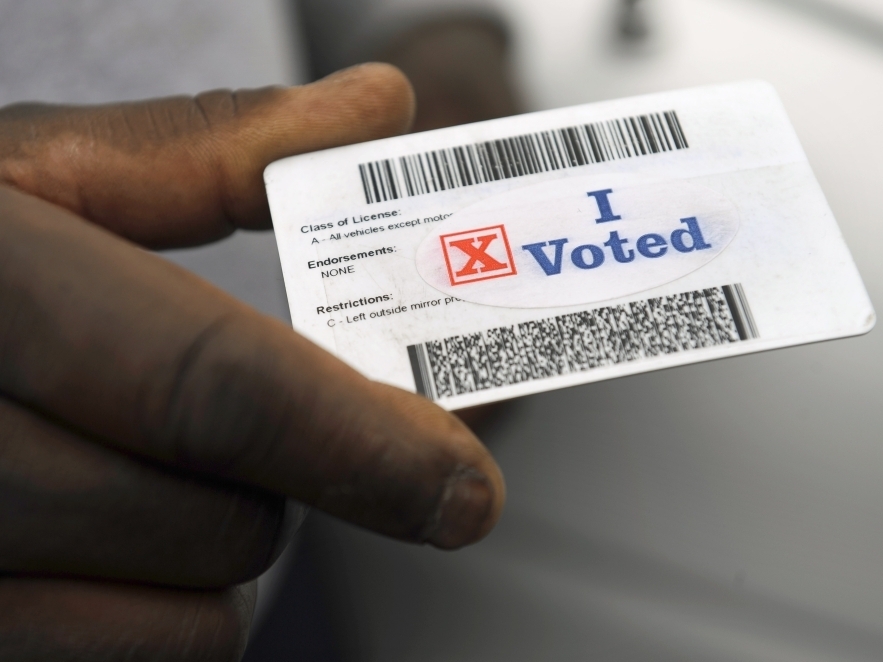 Verdell Winder of Washington holds up his driver's license showing his "I Voted" sticker after voting on Election Day on Nov. 4, 2008.

Tennessee: The state toughened its existing voter ID law to require photo IDs. Obama won't compete here, where even Tennessee native and Democrat Al Gore failed to win in 2000. But the fight over the law is only just starting. A petition drive is under way to urge lawmakers to repeal the law. If it fails, opponents, led by the general counsel of the state Democratic Party, are considering filing a federal lawsuit aimed ultimately at challenging the Supreme Court's 2008 ruling upholding Indiana's photo ID law.

Wisconsin: Photo ID is required. The ACLU is suing to block the law, claiming it unfairly obstructs the voting rights of seniors, minorities and homeless people. Obama won here handily in 2008, but the 2010 GOP wave moved the state to the right. Now, Wisconsin politics are roiling with backlash against Republican Gov. Scott Walker, making it a certain 2012 battleground where Obama will need high turnout from the minority voters most likely to lack photo IDs.

Indiana: The 2008 Supreme Court ruling upheld the state's strict photo ID law. Obama surprisingly carried Indiana that year, but by just 26,163 votes. Any drop-off in turnout due to voters lacking proper IDs could determine the outcome this year, according to voting rights advocates.

Colorado: Non-photo IDs have been required since 2004, but that didn't stop Obama in 2008 from becoming the first Democrat to win there since 1992. A photo-ID bill failed in the Legislature last year. The GOP has made taking back Colorado a priority this year.

Florida: Photo ID is mandatory, but another law partially taking effect this year could have a greater impact on turnout, according to critics. The law would reduce early voting to one week from two weeks, tighten standards on voter-registration drives, and stop relocated voters from being able to update their addresses at the polls in order to vote that same day using a regular ballot.

The law requires federal approval to be enacted. And the Brennan Center is suing to overturn it.

Florida always is one of the most coveted toss-up states. Obama won Florida by just 2.5 percent, relying heavily on the early voting that could be reduced under this law. He's currently polling weakly in the state, and the Republican Party controls the governor's office and Legislature and runs a strong statewide field operation.

Ohio: Requires a non-photo ID. A photo ID bill failed in the Legislature last year, the result of voting rights advocates lobbying against it. Obama won here in 2008. The Buckeye State is the ultimate bellwether, having sided with the winning candidate in all but one presidential election since 1944.

Missouri: Requires a non-photo ID. A constitutional amendment to require photo IDs will go before voters in November, but the result may not matter: The governor last year vetoed a bill needed to implement such an amendment. Back in 2006, the state Supreme Court struck down a previous photo ID law. Obama lost Missouri by just 3,632 votes.

All states have exceptions to their ID requirements, such as allowances for the disabled, military service members and those with religious objections to being photographed.

Many states also allow voters without IDs to cast ballots if election officials on site sign affidavits attesting to a voter's eligibility.