Accessibility links
Iranian Nuclear Expert Killed; Tensions Mount An explosion in Tehran kills an Iranian nuclear scientist while he's driving his car. It's the fifth such death in five years. Iranian officials immediately blamed Israel for the attack, which comes amid an escalating conflict between Iran and the West. 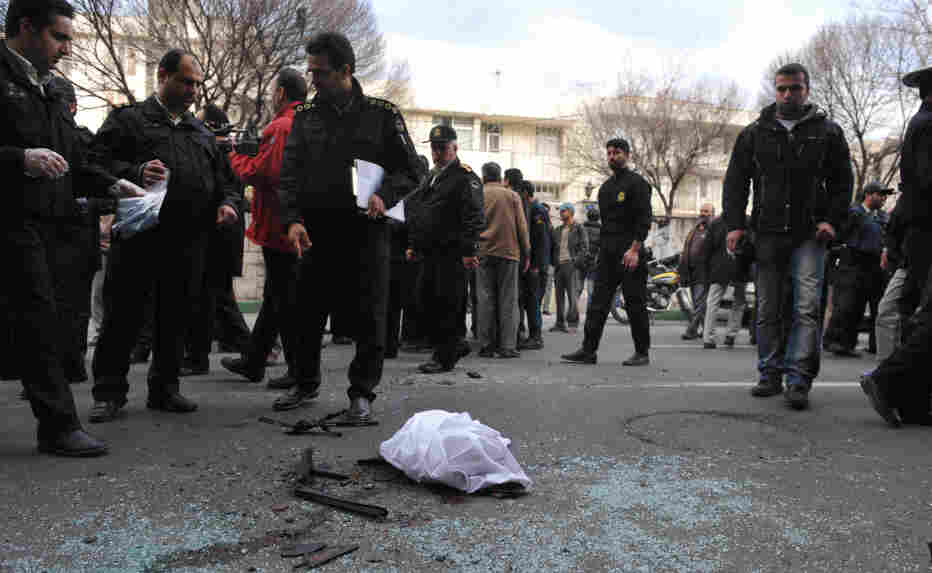 Iranian security forces inspect the site where a magnetic bomb attached to a car by a motorcyclist exploded outside a university in Tehran on Wednesday, killing nuclear scientist Mostafa Ahmadi Roshan. Sajad Safari/AFP/Getty Images hide caption 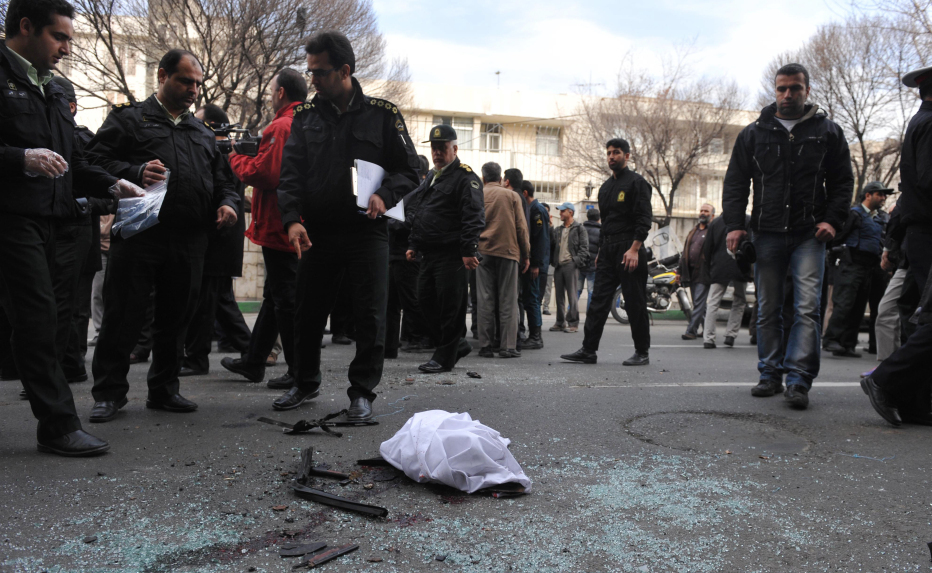 Iranian security forces inspect the site where a magnetic bomb attached to a car by a motorcyclist exploded outside a university in Tehran on Wednesday, killing nuclear scientist Mostafa Ahmadi Roshan.

An explosion in Tehran on Wednesday killed an Iranian nuclear scientist while he was driving his car. It's the fifth such death in five years.

Iranian officials immediately blamed Israel for the bombing, which added to the escalating tensions between Iran and the West.

Television footage showed the street where engineer Mostafa Ahmadi Roshan's life ended, in much the same manner as other nuclear scientists before him, in Tehran rush-hour traffic.

Witnesses told Iranian media that a motorcycle pulled up alongside Roshan's car and a man attached a magnetic bomb before speeding away.

There was no claim of responsibility, but officials called it the work of "the Zionists," Iran's term for Israel.

On Tuesday, Israel's military chief, Lt. Gen. Benny Gantz, told an Israeli parliamentary committee that 2012 would be a year in which Iran would experience increased international pressure — including, in his words, "events that happen unnaturally."

David Albright, a nuclear analyst at the Institute for Science and International Security in Washington, speaking before the latest assassination, said Tehran must be feeling the pressure financially, diplomatically, and from covert operations:

"It knows that some of its scientists are under threat [of] assassination; there's been cyberattacks; there are efforts to get Iranians to defect. We've called it kind of a third way — all those things are continuing, and that's added to the pressure," he says.

The American and European drumbeat for ever more painful sanctions has been greeted by Iranian war games, missile tests and threats to close the Strait of Hormuz, the vital oil shipping lane. U.S. and British warships have since raised their profiles in the Persian Gulf.

Most analysts agree there is a built-in disincentive for Iran to try to block the Strait of Hormuz — doing so would also choke off Iran's own oil exports.

But Gary Sick, a Middle East expert at Columbia University, says there is one circumstance under which Iran might take such a drastic step — if Western sanctions against the Iranian central bank are implemented, because that would mean Iran could no longer expect to get paid for its crude.

"Iran has indicated quite clearly — and I'm not sure this has been understood in the West — they've indicated that if they are no long able to sell their oil, they will regard that as a blockade or an act of war, even if it's done through the banks," Sick says. "In that event, they have said they're not going to just sit on their hands."

Much of the hostility can be traced to Western fears that Iran's nuclear program includes a drive for weapons capability, which Tehran denies. But Iran hasn't helped matters by announcing recently that uranium enrichment has begun in a hardened underground site called Fordo, near the holy city of Qom.

Analyst Mark Fitzpatrick at the International Institute for Strategic Studies in London says the most troubling aspect of the move is Iran's current emphasis on enriching uranium to 20 percent, which is closer to weapons-grade.

But he also notes that amid all the saber-rattling, Iran has offered to resume nuclear talks with six world powers. No date has been announced, and Fitzpatrick says he's pessimistic about a breakthrough anytime soon. But there may be a diplomatic component to Iran's insistence on enriching to 20 percent.

"Iran may feel that it's strengthening its hand in any upcoming negotiations, by making more valuable this card of being willing to stop producing 20 percent enriched uranium," Fitzpatrick says.

"It's probably equivalent to the Western view that by ratcheting up sanctions the West strengthens its hand, because it's a sanction that could be later withdrawn in negotiations," he says.

Sick says a deal that sees Iran agreeing to stop its 20 percent enrichment may be the only plausible avenue for a diplomatic success in the near future.

Whether that's possible in the current climate, and whether that would ease the current tensions, are among the questions now being debated in Tehran and Washington.