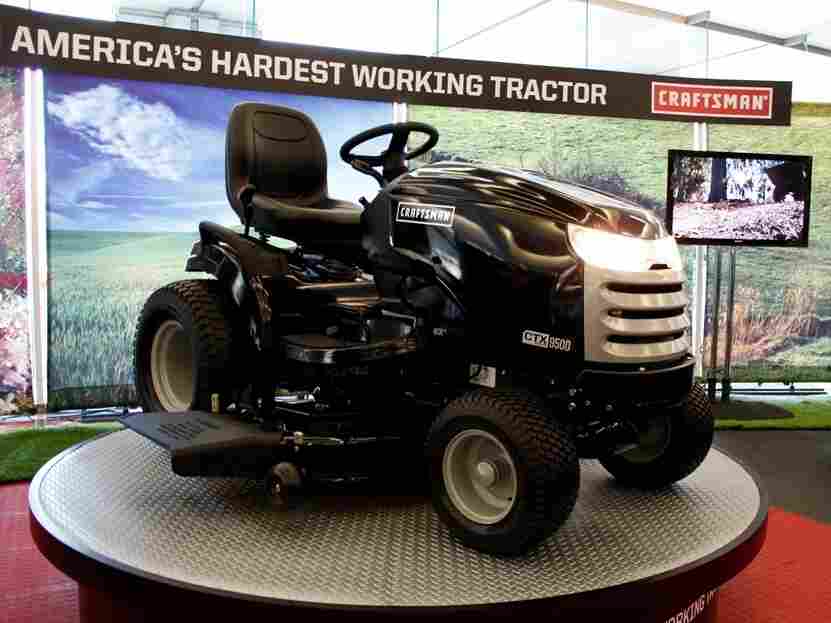 Craftsman's CTX tractor series is the first to be featured at the Detroit Auto Show. The newly unveiled line is equipped with many automobile-inspired features, including cup holders. Mercedes Mejia hide caption

At the 2012 North American International Auto Show, it's clear that the industry's love affair with alpha-numeric designations hasn't waned. There's the ATS, the 700C, the MKZ. Now comes the CTX, a new line of Craftsman riding lawn mowers. They are fast, powerful and loaded with amenities.

"Everybody knows that Detroit's the national stage for cars — Motor City is where autos come from. So this show made perfect sense to come here and launch the tractor," says Onney Crawley, Craftsman's director of brand management for lawn and garden.

Like cars, the CTX has automatic traction control. It also has tilted steering, cruise control, a digital dashboard and a cup holder. The next iteration will have an iPod port.

But there's another reason it makes sense to show a riding mower at an auto show: the shared customer base.

Kris Malkoski, a vice president at Craftsman, says thousands of people who attend the show have big yards, a do-it-yourself attitude and enough disposable income to afford upscale vehicles.

And the CTX is fast — for a lawn mower.

But Kim Ridel, tactical brand manager for riding equipment at John Deere, says some of their tractors "go up to 8.5 mph." Ridel adds that John Deere has been introducing automotive features on riding lawn mowers since 1982.

So while Craftsman can't take credit for the trend, it can pat itself on the back for a good marketing gimmick. And at $3,000 to $6,500, depending on model and trim level, the CTX is by far the most economical vehicle on display at the auto show.

The audio of this story, as did a previous Web version, incorrectly gives the base price of the CTX tractor as $2,500. The actual base price is $3,000.