Mark Wahlberg, After One Last Haul In 'Contraband'

Mark Wahlberg, After One Last Haul In 'Contraband' 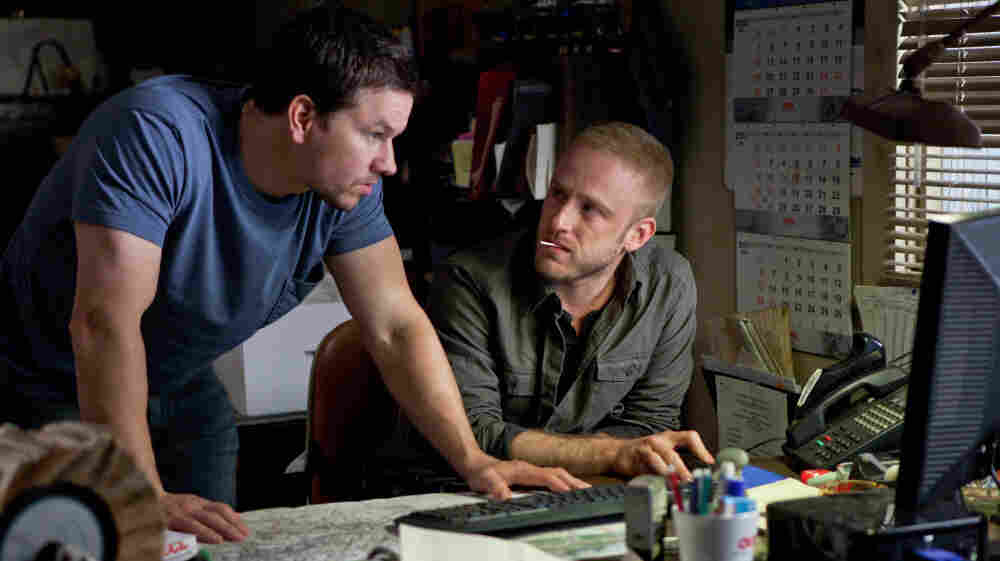 One Last Job: A reformed smuggler (Mark Wahlberg, left) gets back in the game to save a family member, enlisting an old friend (Ben Foster) in a heist movie adapted from the Icelandic thriller Reykjavik-Rotterdam. Patti Perret/Universal Pictures hide caption

Rated R for violence, pervasive language and brief drug use

From 'Contraband - 'Let's Work Something Out"

'Let's Work Something Out'

From 'Contraband' - 'No More Options'

There are good movies, there are bad movies, and then there are movies that your parents rent two or three times before realizing 20 minutes in that they've seen them before.

Contraband, the mediocre new Mark Wahlberg thriller, falls squarely in the latter category — not because it's risible by any means, but because nothing about it lingers, not even the sulfuric stench of a bum scene or a particularly hammy performance. Its video box (or Netflix JPEG) will no doubt have its appeals — Wahlberg's soft-on-the-inside glare, scruffy men with guns, the title font of an '80s Sylvester Stallone vehicle — but don't be fooled. You've seen this movie before, even if you haven't seen this movie specifically.

In another example of Hollywood's desperation to snap up any successful properties, no matter how marginal, Contraband is an Americanized version of Reykjavik-Rotterdam, a 2008 Icelandic hit starring Baltasar Kormakur. Those who frequent international film festivals might recognize Kormakur as the director of such eccentric little slot-fillers as 101 Reykjavik, The Sea and Jar City, and he steps behind the camera again here on a much larger production. Perhaps having Kormakur aboard promised some continuity — because surely what works for Icelandic audiences will work for American ones, too — but his quirky sensibility gets lost in the rigors of a large-scale thriller.

Still, forgettable movies are rarely bad movies, and Contraband has a diverting kick once its plot finally ambles into motion. Missing the belligerent edge that marks his great performances in films like The Departed, Three Kings and I Heart Huckabees, Wahlberg settles too easily into the role of Chris Farraday, a reformed New Orleans ex-con who gets dragged back into the smuggling business. After Farraday's screw-up brother-in-law (Caleb Landry Jones) gets pinched running cocaine on a freighter, local baddie Tim Briggs (Giovanni Ribisi) threatens to kill him if he can't come up with the money fast.

Leaving his legitimate home-security business behind, Farraday takes responsibility for the debt and gathers his old criminal buddies for one last job smuggling "funny money" from Panama City back to New Orleans aboard a shipping boat. Meanwhile, Briggs tightens the screws back home by terrorizing Farraday's wife (Kate Beckinsale) and two children, who in Farraday's absence have only his recovering-alcoholic best friend (Ben Foster) to look after their safety.

Once the action shifts to Panama City, Contraband finds a nice groove, eking out plenty of suspense as Farraday and the gang scramble to retrieve the payload before the ship weighs anchor. Kormakur and screenwriter Aaron Guzikowski keep throwing one obstacle after another in their way — including an entirely separate heist — while simultaneously turning up the heat on Farraday's family back home. The raised stakes offer a welcome jolt of energy and introduce a tone of lighthearted derring-do that's absent from most of the movie.